Come into the garden

An unexpected but obviously very welcome glut of sunny days has made me lose track of time in the garden, resulting in a mad rush to finish this blog post. How I ever managed to consistently post every four days while simultaneously working full time, I'll never know.

If there's one thing I've learned this past year it's to live life at a slightly slower pace, although it has also created the opportunity to fine-tune my procrastination habit to an almost professional level! It's a thin line to walk, especially as I've still got to work for my money, and a return to full-time employment is looming on the horizon. 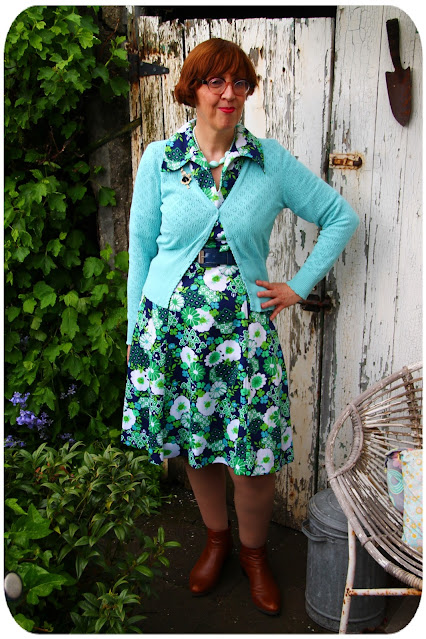 For now, I'm happy as it is - even if there is room for improvement - and I'm making the most of all the days I've got left on which time is my own to do with as I please.

For the sake of this blog, I am backtracking to last week, starting with Tuesday the 11th of May. Although the temperature was nudging 20°C, the sun only paid us the briefest of visits, waving us goodbye before the morning was over. 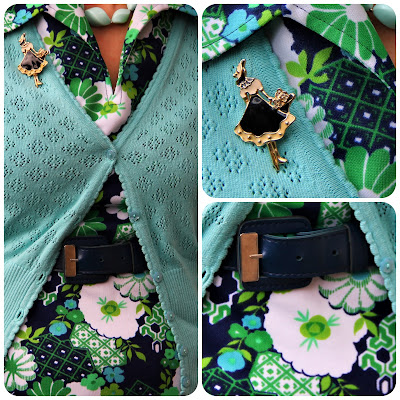 In my book, blue and green can certainly be seen! In fact, it is one of my favourite colour pairings.
Various shades of both have joined forces in this short-sleeved Diolen dress, which is usually among the first to get an outing in Spring.
I picked up the palest of the greens by adding a sea foam beaded necklace and honoured the sky blue with my charity shopped King Louie cardigan. Navy was represented by my belt and the delightful  enamelled brooch featuring a girl bearing a flower posy. 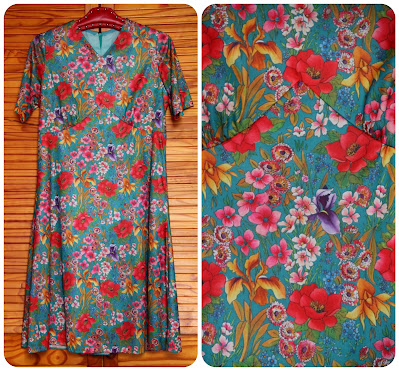 As that week's Thursday, my other non-office, would be a public holiday and consequently everything would be closed or far too busy, it was a toss-up between the charity shop and the garden centre on Tuesday.

In the end, we decided to do both, starting with a visit to the three-floor charity shop in nearby Duffel.

The clothing rails were choc-a-bloc and I dithered over a couple of things, in the end only buying this handmade vintage dress offering a veritable explosion of Summer flowers on a teal background.

Ok, I also bought a mustard cardigan and a pair of slouchy trousers, but they weren't exciting enough to merit photographing. 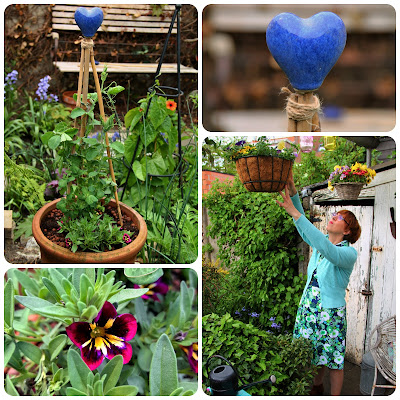 On to the garden centre, where a handful of annuals and two perennials ended up in our trolley, together with a Sweet Pea plant (Lathyrus odoratus). I love Sweet Peas, and each year I vow to grow some from seed, lack of space on a sheltered windowsill usually putting paid to my plans.

Back at home we had lunch, after which I wasted no time in planting them in a big terracotta pot, where they are allowed to scramble upon a wigwam I cobbled together from old bamboo canes, one of which topped with a blue ceramic heart. At its feet, I planted the delightfully named Calibrachoa ‘Good Night Kiss’ (bottom left), more commonly known as Million Bells. 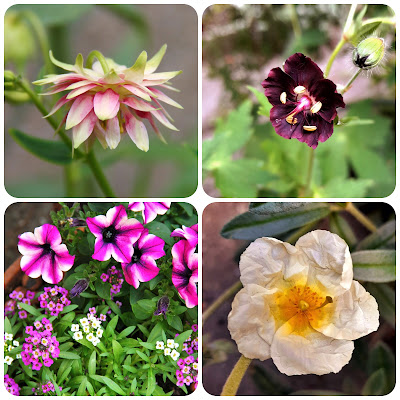 As Spring flowers are slowly but surely making way for their Summer sisters, the time has come to spruce up the little courtyard at the end of the garden with patio pots. Here, I planted yet another terracotta pot with striped Petunias, aptly likened by Vix to circus tents. These particular ones are called 'Rose Stardust' and they seem to be floating upon a sea of white and purple Alyssum (bottom left).
Other floral delights include, clockwise from top left, the by now pink-tinged petticoats of my beloved Aquilegia 'Nora Barlow', the first of the dusky purple Geranium phaeum flowers, and the delicate white, yellow hearted crepe paper-like blooms of Helianthemum 'Snow Queen'. 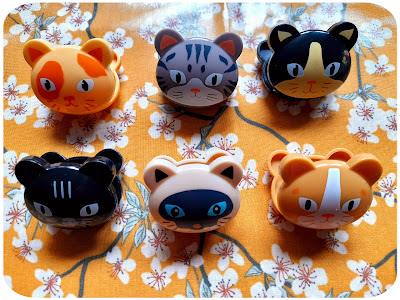 Wednesday's office days was a reasonably busy one, but as the sun had decided to be with us for the duration, I nipped outside during my lunch break.
On my way back from the hairdresser the week before, I'd seen rolls of vinyl tablecloth in various gorgeous patterns outside a lovely shop called Akotee (linking because I like), and as we were in need of a new cloth for our kitchen table, I returned, armed with the necessary measurements, and selected a mustard yellow one with sprigs of white flowers. It is coated cotton rather that vinyl, and it looks fantastic against our kitchen's blue walls.
I was also tempted by a set of cat face shaped bag clips. No Bess among them, though.
And speaking of Bess, there's no sleeping in on my days off with her around, as she tends to jump on the bed - and on us - in a bid to get us out of bed. We've had to shut her out of the bedroom at one point. And of course, the minute we finally get up, she's out for the count, looking as if butter wouldn't melt! 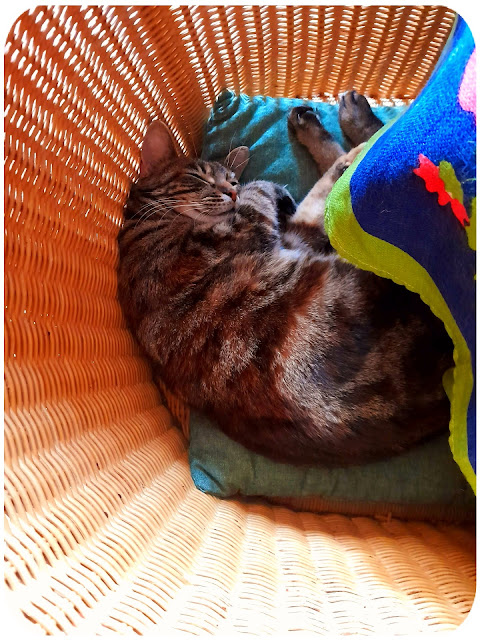 Thursday was mostly sunny, with temperatures of about 18°C. As I had gardening plans, the outfit I wore was assembled with that in mind, selecting a black floral skirt and a pale long-sleeved blouse scattered with tiny red flowers. These are both items which, although nice enough, aren't too precious to wear for some light gardening.
Both the skirt and blouse are old Think Twice finds, but it was the first time they were paired. 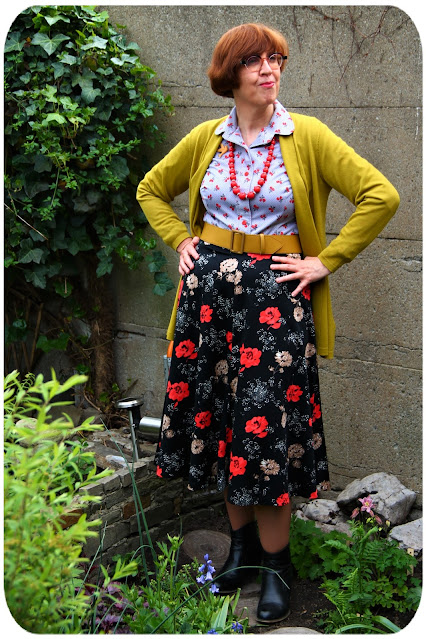 I refrained from using red throughout as an accent colour for my accessories, only picking a red beaded necklace, and adding a belt and bird brooch in butterscotch yellow.

As the temperature had dropped by the time we made the outfit photos at the end of the day, I quickly threw on my chartreuse mid-length open cardigan, which I think doesn't look bad at all. 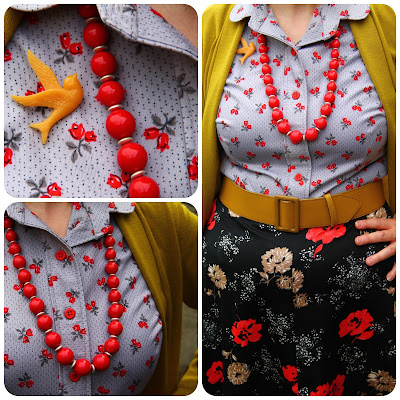 Back to that morning's gardening, for which I pulled a pair of purple striped Pipi Longstocking socks over my tights and wore my charity shopped purple plaid ankle wellies and old IKEA denim gardening apron. Into the latter's generous front pocket hides a myriad of items such as my gardening gloves, pieces of string and my trusty pair of secateurs. 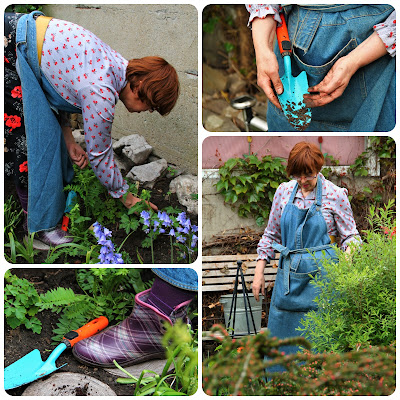 My first task was planting the two perennials we brought back from the garden centre on Tuesday.
Persicaria bistorta (Common Bistort) and Verbascum nigrum (Dark Mullein), along with two leftover purple Alyssums, were added to the new border on both sides of the stepping log path. 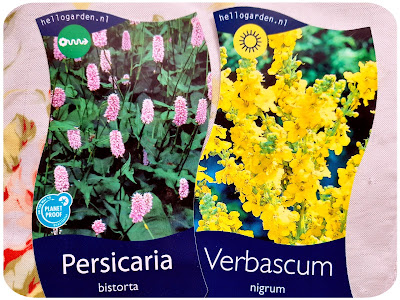 Then, with the help of Jos, I transplanted the Nasturtium seedlings into small terracotta pots. When I ran out of these, I put two of them in the old enamel coffee pot I roped in as a planter last Summer, and planted the rest in the garden. In the new border, some of the offspring of last year’s climbing Nasturtiums are popping up too. 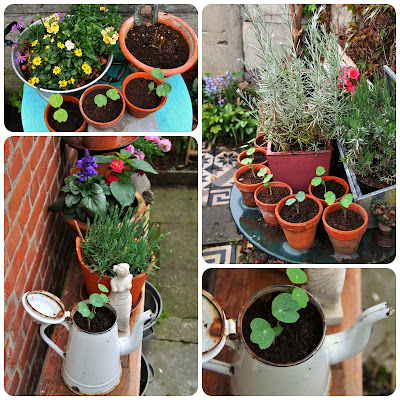 Aquilegias galore, including one we never planted in the first place. Growing in a crack along the wall I found the wine red double Aquilegia (top left) which must be the mutated offspring of Nora Barlow. Isn't she gorgeous? Clockwise from top right are the first flower of  'Crimson Star' about to open, the first of the 'Biedermeiers' and the promising flower buds of Aquilegia alpina! 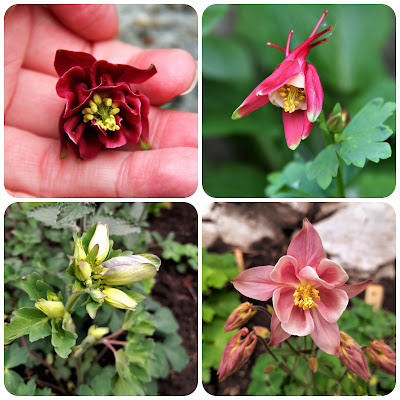 We're jumping to Saturday now, a cloudy and mostly rainy day, with a drop in temperature to a decidedly non-Springlike 14°C. Hello, weather gods, wake up, it's May for goodness sake! 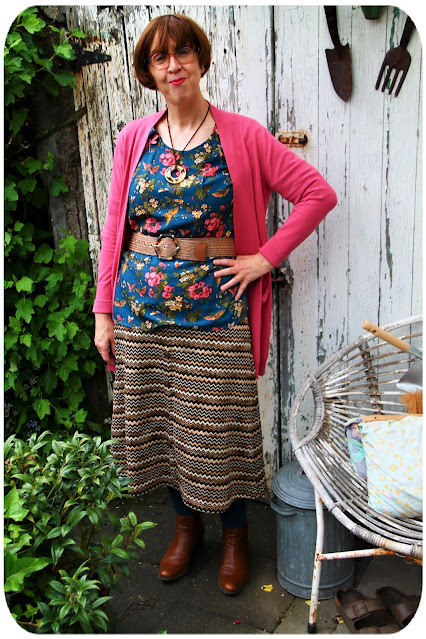 Layering is key in these kind of temperatures, so I wore a three-quarter sleeved t-shirt underneath the midnight blue long-sleeved top. The latter was a charity shop find, as were the necklace and long line pink cardigan, while the pink dragonfly brooch was picked up at the indoor flea market. 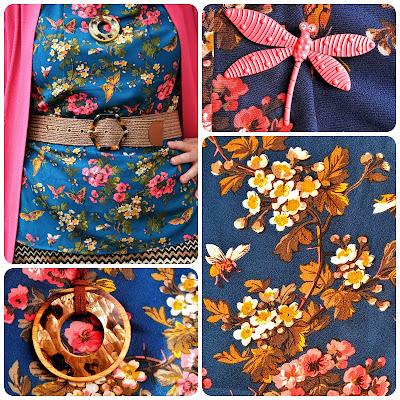 The rest of my outfit was bought from the high street over the years, the most recent being the belt and the oldest the skirt which, although the shop it is from firmly classes it as fast fashion, has been going strong for more than 10 years now.
In spite of the dampness of the day, there was no rest for the wicked when it came to gardening. After all, I still had a trayful of annuals to be given a home. Next up were a two-tone pink Pelargonium and Petunia 'Sweet Pink' (top right) which will hopefully keep each other company for months to come.
Elsewhere, our late Winter, early Spring combos of Pansies, Violas and Bellis (bottom left and right) are still going strong. 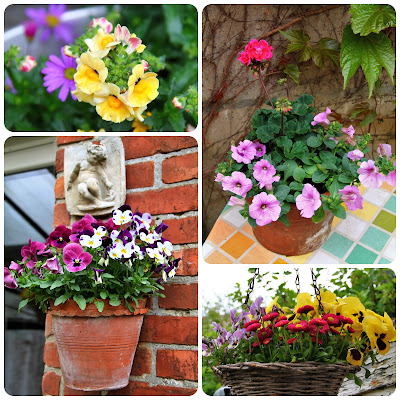 I'm leaving you now with a view taken from the back of the garden towards the house.
To the left of the kitchen, from where Jos is keeping an eye on things, is the famous potting shed with its peeling paint often used as a backdrop for outfit photos, while to the right is the passageway which leads next to the kitchen. The window box at the end is on our dining room's window ledge, and you can actually see all the way to our front door! 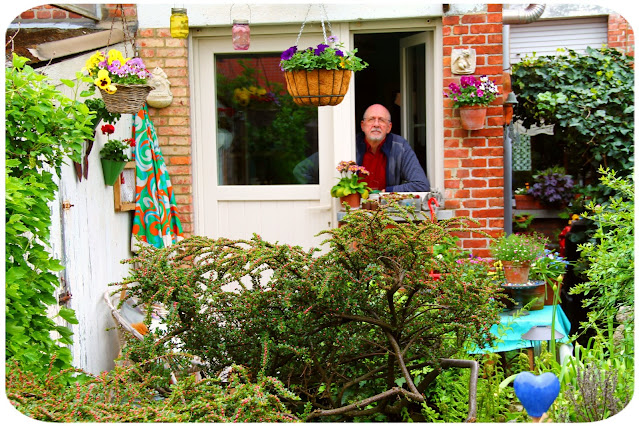 And with that, I bid you goodbye once more. I hope you'll join me again next time, and that you will do your best to remain safe, sane and fabulous until then!
Posted by Polyester Princess at 19:23