Who knows where the time goes? Not me, that's for certain, as it absolutely boggles my mind that we're already half-way through the month of May at the time of typing.
Give or take the odd day when it felt like Summer was on its way, there hasn't been much improvement in the weather. We were treated to the familiar mixture of clouds - sometimes dark and foreboding, a solid blanket of mind-numbing grey at others - showers and sudden bursts of sunshine. The kind of neither here nor there weather that makes us sigh and resignedly plod on.
The temperature hasn't been much to write home about either, reaching only a shivery 11°C on Wednesday the 5th of May. Nevertheless, this was redeemed by it remaining dry and sunny, so that my coiffure wasn't immediatly ruined after my visit to the hairdresser! 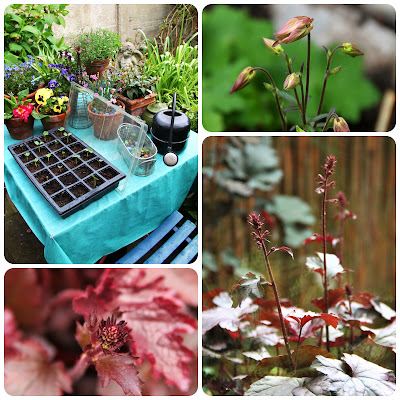 An after-work stroll through the garden revealed yet more Nasturtium seedlings, the newly planted Aquilegia about to unfold its first flower, and all four of our garden's Heucheras, including those in the window box and terracotta pot in the passageway next to the kitchen - having developed wands of budding flowers. 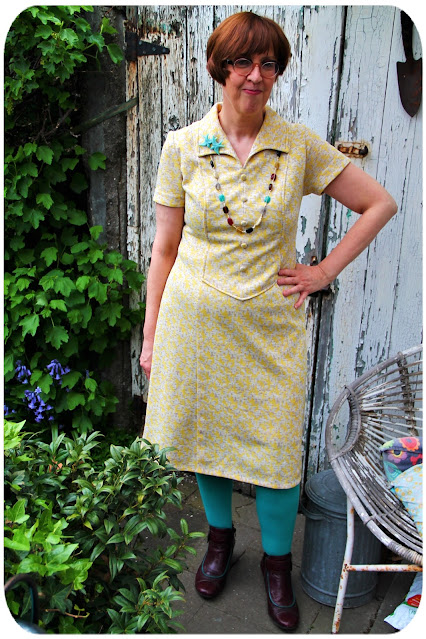 Thursday went off to a sunny start, but clouds soon appeared out of the blue by late morning. The initial forecast had been for warmer temperatures than the repeat of Wednesday's 11°C, making me reach rather optimistically for one of my short-sleeved frocks.
Made from a jersey polyester, this mod style dress - once again an old Think Twice find - was warm enough to combat the relative chill, although its pastel yellow colour failed miserably at replacing the vanishing sunshine. 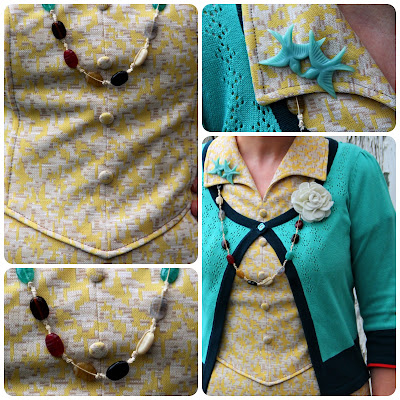 I couldn't really put my finger on it, but I didn't really feel this outfit. Perhaps I've gotten so used to seeing myself in stronger colours but, whatever the case, it made me feel a bit washed out. A feeling which wasn't even remotely remedied by the liberal doses of sky blue I completed my outfit with.
The cardigan was a charity shop find, and so were the boots, but everything else was once bought new, the birds in flight brooch as well as the necklace UK holiday acquisitions. 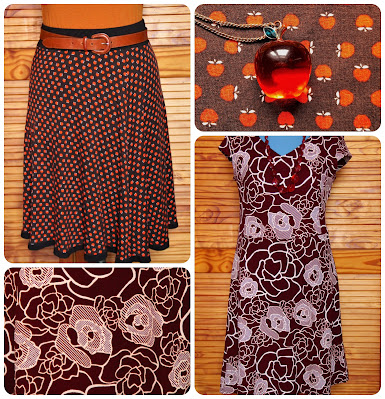 We needed a couple of things from the garden centre, but decided to make a detour to the big Oxfam shop in a small nearby town which we hadn't been to since February.
The majority of their clothing rails are suspended from the ceiling by ropes, causing something akin to seasickness when browsing them, which, together with the semi-fogginess of my glasses caused by my mask, made me feel quite dizzy.
Nevertheless, I found a couple of things, including an apple patterned skirt by retro label Zoë Loveborn and a burgundy and pink Summer dress from Cassis, a Belgian high street shop. 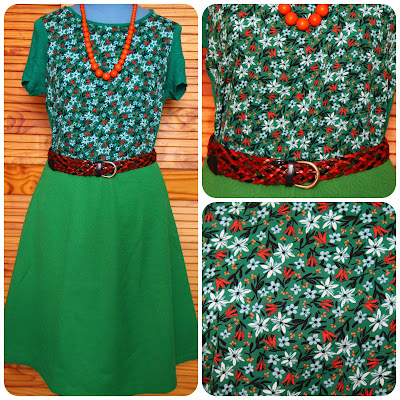 My favourite find, though, was this green based floral top by French label Gerard Darel. Again, Angelica was lucky enough to get first dibs on wearing it!
Then it was off to the garden centre where, apart from another batch of plants, we bought an additional log effect wooden slab to complete our stepping stone path. 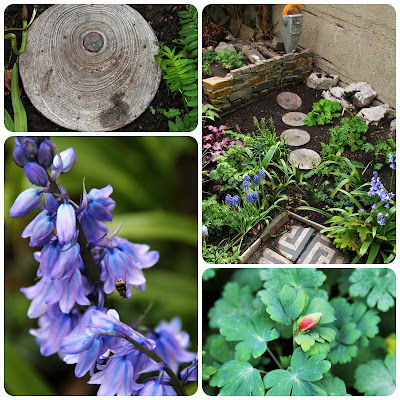 The weather wasn't inviting a gardening session after lunch, but I was still determined to put the finishing touch to the path, which now reaches all the way to the retaining wall.
Soon, the bluebells will be over for another year but until then, their delicate violet-blue veined flowers never fail to delight me, even if in our tiny garden they might not provide the ‘blue-buzzed haze’ as described by the poet Gerard Manley Hopkins (1844-1889). And oh, look, another Aquilegia is on its way. This one is called 'Crimson Star' and as it has been newly planted, I can't wait to see it in its full glory. 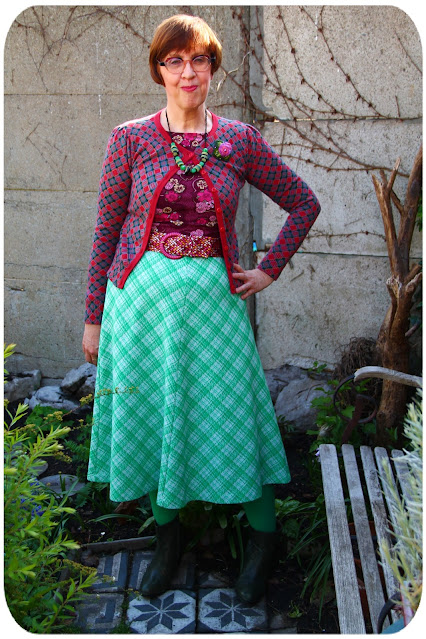 The mercury climbed to 16°C on Saturday, but once again it was overcast and it starting raining quite heavily soon after our fruit and yoghurt breakfast. Obviously, this did nothing to improve my morale, which was at a bit of a low. In fact, I felt quite tired and out of sorts all day, and definitely needed the colour boost provided by my outfit.
I was determined to finally wear the funky plum-coloured long sleeved top I charity shopped in January. I think it found its perfect companions in my green and white plaid textured polyester skirt and my plaid King Louie cardigan, a charity shop find which, apart from the obvious red, also has grey, yellow, teal, green and brown in its knit. 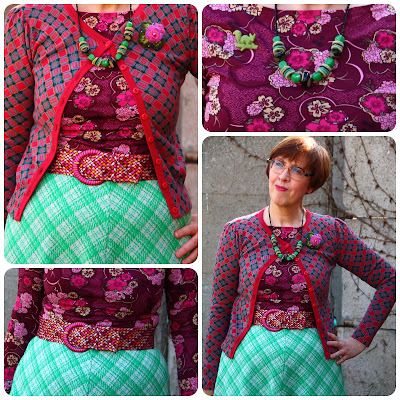 Further accessories were a pink, yellow, white and brown woven belt, a necklace of plain green and black and white glass beads joined by felted circles, a crochet flower corsage pinned to my cardigan and a green plastic squirrel brooch adorning my top. Together with my grass green opaques, the latter was my only retail buy. My green wedge-heeled ankle boots - a charity shop find in November 2018 - came out to play once more. 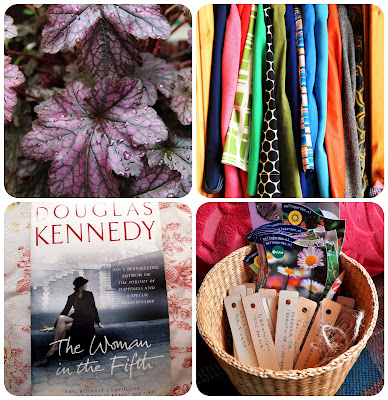 We took the outfit photos at the end of the day, when the sun decided to pay us the briefest of visits.
The rest of the day wasn't entirely wasted, though, as I switched around my coats and jackets, making the Spring and Summer ones more easily accessible, wrote a batch of plant labels and continued my latest read, Douglas Kennedy's The Woman in the Fifth. 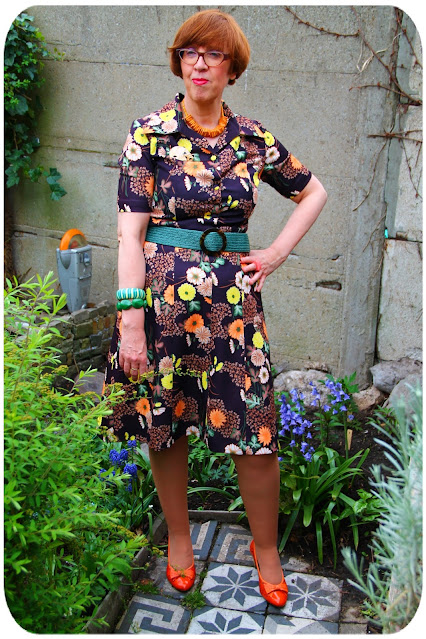 Sunday had been heralded as the week's best day, with temperatures of up to 25°C. This was good news for Belgium's cafés and restaurants, which had been allowed to open their outdoor spaces and terraces that weekend. The fact that the sun was mostly hidden behind a layer of clouds, and that we had one or two heavy showers to contend with, didn't dampen people's enthusiasm, with the inevitable crowds as a result.
Obviously, we stayed put and spent the better part of the day in the garden, making up for lost time. 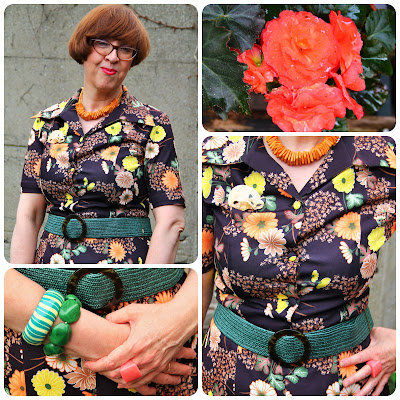 I last wore this chocolate brown short sleeved dress almost exactly a year ago to the day. It was a happy reunion and with its orange, yellow, green and light brown floral print on a dark background, it wasn't too delicate to be worn for gardening.
The stretchy green belt is slightly too large on me - it was bought retail but came in one size only - but some clever (Sheila would say "klassy") use of a green hair elastic solved the problem of its end dangling ungainly.  I added an orange necklace and green bracelet and bangle, et voilà! There's also a cat brooch but it is somewhat hidden among the flowers.
And obviously, I did not wear the orange shoes for gardening! 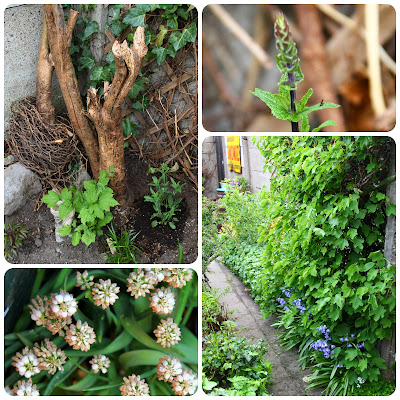 We started by planting Salvia nemerosa ‘Caradonna’ to the right of the dead tree trunk structure (top left and right). Its flower spikes will soon attract the local population of bees.
Then I lifted the spent bulbs, including white Muscari (bottom lef) from their pots, and put them in an out of sight spot in the passageway border, where they are allowed to die down gracefully. 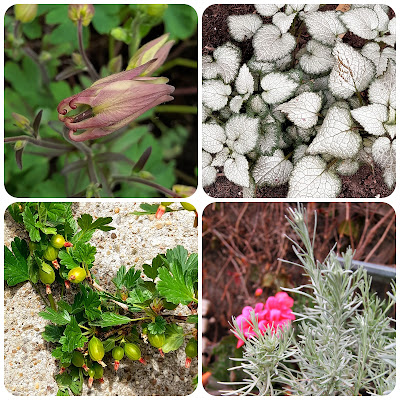 Meanwhile, the Aquilegia 'Biedermeier' (top left) in the new border is making progress, some flowers already clearly exposing their spurs, while elsewhere, a glut of gooseberries is in the making.
Even last year's curry plant (Helichrysum Italicum, bottom right), which stubbornly remained flowerless back then, seems to have mended its ways, as it is full of flower buds.
As is the white lavender peeking up behind the sea of cheerful looking pansies.
My final task was planting up some of the annuals which had been waiting patiently in the aisles. Here, Salvia 'Mystic Spires', which were a huge success last year, are joined by Petunia 'Fiesta' and white Nemesia. 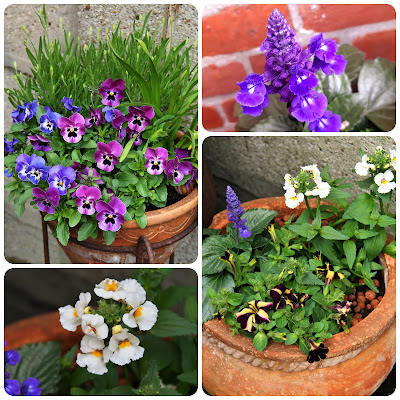 And now, for some more Bess progress before I call it a day. The little rascal has now started exploring heights, as here she is on top of one of our dining room cupboards. As this is unknown territory for us - Phoebe never did anything as daring - this is quite unsettling, but luckily she seems to be very careful and no damages have occurred (yet).
She is still fond of her snooze bay, in which we often find her fast asleep. She's even found an alternative way of using it (bottom right) by jumping on top of it and plonking herself down in the resulting cavity. 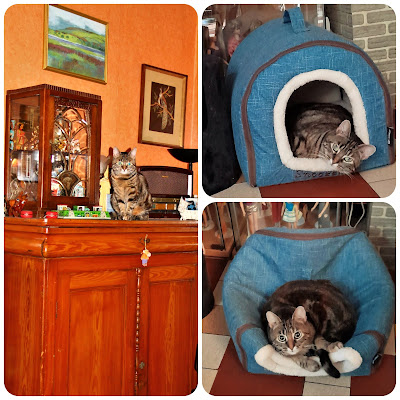 So, that was it for now.
I hope to see you soon. Until then, as always, please do stay healthy and happy, and I'll try to do the same.
Posted by Polyester Princess at 18:44