This mess we're in

It's chucking down while I'm typing this and I can hear a torrent of rain drumming down on the landing skylight. Under a dome of steel grey sky, the world outside my window is reminiscent of a November scene but for the lush green canopy of the giant birch tree on the corner, its leaves dripping raindrops long after the rain itself has stopped. A sole pedestrian hurries by, rain-coated and hunched-shouldered. Cars splash through puddles, their windscreen wipers working overtime.

Oh, but all that rain's good for the garden, isn't it? Yet even the garden has had enough by now, looking drenched and forlorn, the soil waterlogged and squidgy, the flowers prematurely letting go of their sodden petals.

Frankly speaking, I've had enough too. I'm longing for a succession of balmy, sunny, soul-soothing days, just like we did this time last year.

What we didn't have back then, but do have now, was a ray of hope of getting out of this mess we're in.

I'm happy to report that not only did Jos get his second jab last Saturday, I too have finally got my invite to save the date on the 4th of June and the 9th of July respectively. Huzzah! 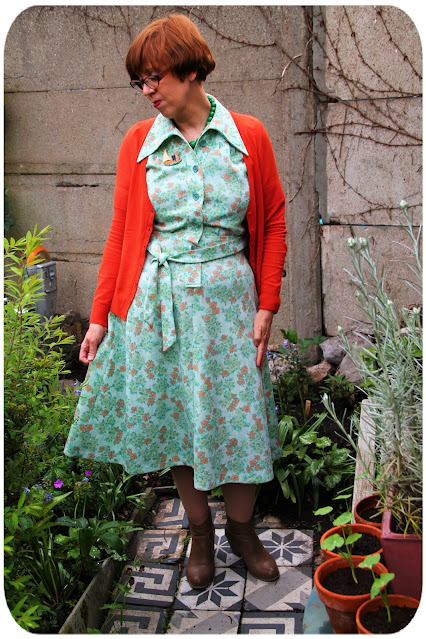 For the sake of continuity, I'm picking up where I left off, which was in the weekend before last.

The weather on Sunday the 16th of May could almost have been a carbon copy of Saturday's, with a  sunny start but soon culminating into clouds and showers, the temperature a rather chilly 14°C.

Still, I was adamant to wear one of my short-sleeved frocks, opting for a fit and flare dress in the palest of greens sprinkled with delicate yellow and orange flowers and fresh green foliage. It comes with an attached self-fabric belt, which for once I didn't feel the need to replace. 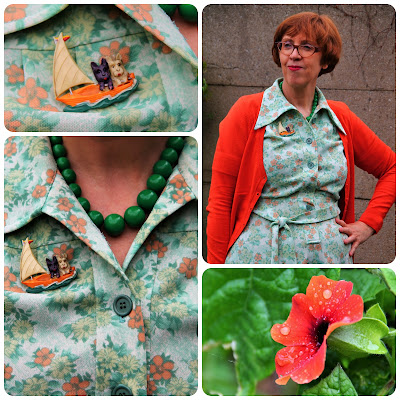 I kept my accessories simple, just adding a green beaded necklace and mid-century celluloid brooch featuring two Scottie dogs in a sailing boat. They're clever chaps opting for their own private version of Noah's Ark to sail away in.

An extra pop of colour was provided by the bright orange cardigan, which I needed to keep the goosebumps at bay.

Before the heavens opened, we cracked on with a couple of tasks in the garden, starting with last year's strawberry plant in its hanging bucket a good dose of organic feed. It's got several flowers already, which hopefully will end up as juicy red berries. 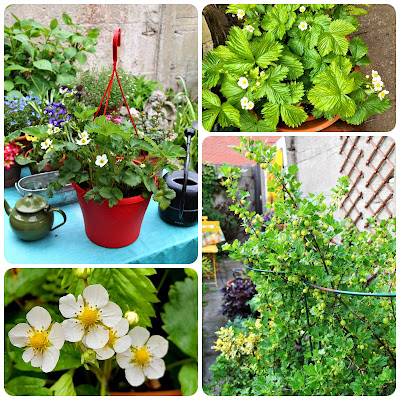 In the meantime, there seems to be no stopping the wild strawberries (bottom left and top right), which are growing like mad in the large terracotta planter which used to be home to last year's rhubarb. The rhubarb in question has sadly departed without trace, which cannot be said of the tiny strawberry we'd hastily planted in there, a little stray rescued when we revamped the plant tables outside our back door last June.

Another job to be tackled was staking the gooseberry bush which, laden with what looks like a bumper crop of berries, was in danger of succumbing under their weight, while its canes were lying in wait to scratch unsuspecting passers-by with their treacherous thorns. 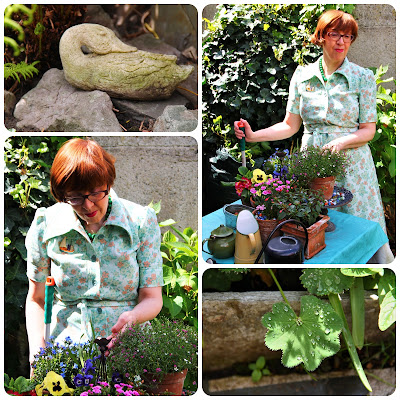 With an army of clouds gathering on the horizon, it was time to retreat indoors where, after lunch, I continued with my seasonal wardrobe changeover. Taking the last of the Summer frocks out of the linen chest - although heaven knows when I'll be able to wear them -  I filled the by now empty vacuum bags with their Winter siblings. Then Jos schlepped the vacuum cleaner upstairs and helped me re-vacuum the bags and put them into hibernation.
Before doing so, however, I retrieved this almost-forgotten jacket from the bottom of the chest. In a hard to capture emerald green, this vintage new wool jacket with its shiny black buttons and vinyl belt, hasn't seen the light of day for years. The last time I wore it must have been pre-blog. Having become a bit too snug on the hips, it nevertheless escaped being sold on, perhaps due to some reluctance to part with it. Trying it on one more time, I was happy to find it fits me once more! 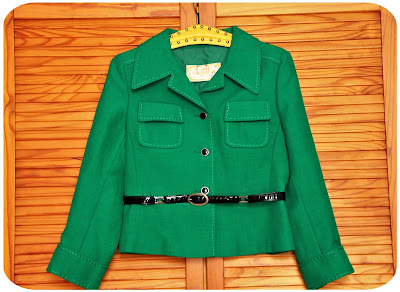 I'm once again skipping Monday's office day. As if we didn't have to get up early enough already, we were woken up in the middle of the night by Bess jumping on and off the bed and the chest of drawers beneath the window, where she had managed to dislodge one of the blind cords, so that Jos had to do an emergency repair. Needless to say, we were wide awake by then. 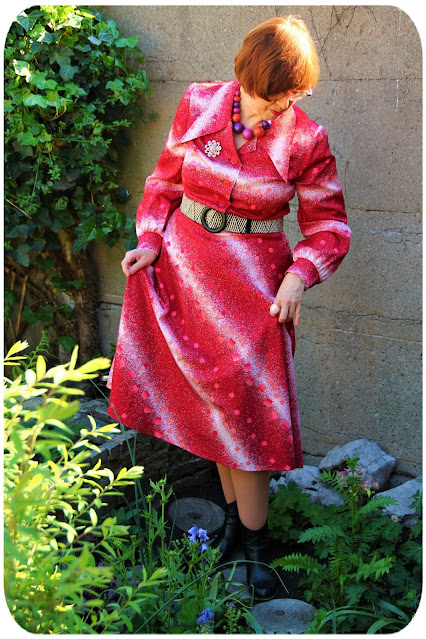 In spite of the wet weather forecast, it turned out to be a reasonably sunny day on Tuesday, the temperature reaching 16°C.

The dress I selected had been hanging ready for a couple of weeks, waiting for the right weather conditions to wear it. It might be long-sleeved, but the fabric is quite thin and unlined. 1970s vintage and sporting a lethal dagger collar, it is from the Finnish Merry Finn label, and yet another old Think Twice find. 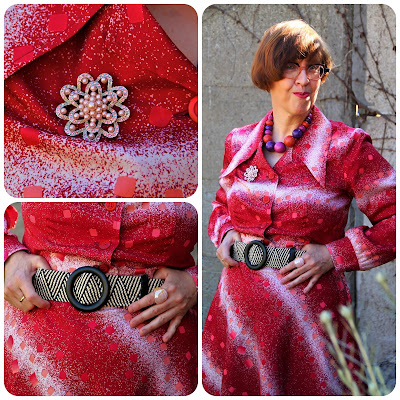 I accessorized it with one of my beloved stretchy chevron patterned belts, a pink pearly brooch and a necklace of pink, orange and purple wooden beads.

After our fruit & yoghurt breakfast, we made a trip to the garden centre, as we needed a bag of compost as well as our usual brand of cat litter, which the supermarket had run out of. 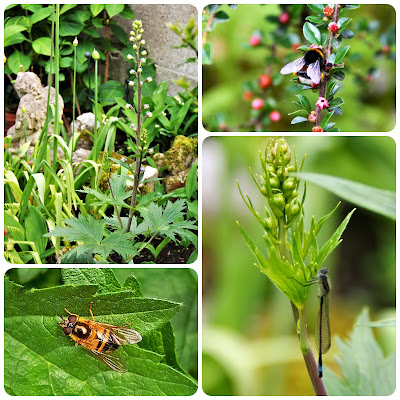 While we were there, it would have been rude not to have a look at plants, and it was almost unavoidable that I was seduced into making some purchases. I selected another tray of annuals, including two varieties of Diascia and Antirrhinum, both of which were a huge success last  Summer. Three perennials came home with us as well: Dicentra formosa ‘Luxuriant’, or Fern-Leaf Bleeding Heart,  Gaillardia ‘Kobold’ and the delightfully named Salvia microphylla ‘Hot Lips’.

I also picked up an almost fully grown and about to flower Delphinium (top left and bottom right), as the one I'd planted in the border was decimated by slugs. Back at home, I put it in a big terracotta pot, the rim of which I completely covered in copper foil tape in a bid to deter the slimy creatures. 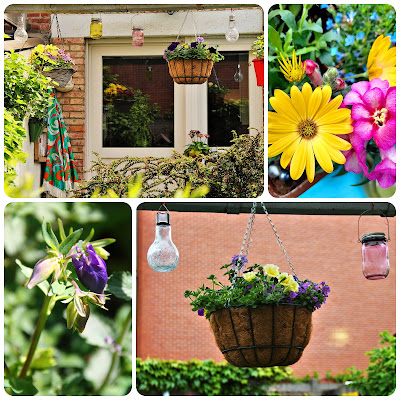 Taking advantage of the favourable weather conditions, I also potted up most of the annuals and found a home for the Bleeding Heart in a shady spot.

After Jos had brought up our solar lights from the basement the previous week and positioned them in the garden, we felt we could do with some additional lighting. So, apart from an additional ground spike, we also bought two lamp-shaped lights to hang from the awning. Our initial idea was to buy some more of the coloured jars we got last year, but unfortunately they had sold out. The new ones work on the same principle, though, the miniature solar panel on top lighting a coil of tiny led lights. 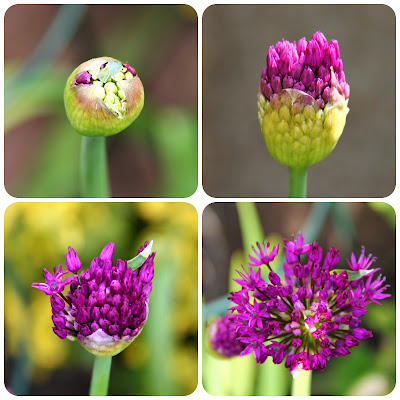 The mild and sunny weather continued on Wednesday's office day, but was briefly interrupted by a sudden downpour around lunch time. A torrent of emails kept me busy all day so that I was glad to be able to step out into the garden for a moment of zen when I got home.

I'd been following and photographing the developing Allium globes for a couple of days and that evening I was happy to note that the most forward ones had burst out of their skins. They are Allium hollandicum 'Purple Sensation', and their colour is truly sensational indeed! 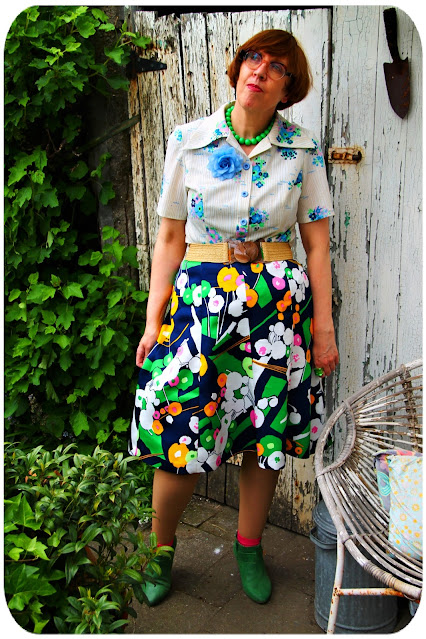 If we'd been hoping for a repeat of the previous days' sunny weather on Thursday, we were sorely disappointed as a solid layer of clouds soon obscured the initial blue sky and sunshine we'd woken up to.
Nevertheless, I insisted on wearing short sleeves again, this time opting for a skirt and blouse combo. First outing for the brightly coloured Diolen skirt I found in a charity shop in October last year. Its companion was a vintage blouse found at Think Twice many years ago, to which I pinned a flower corsage in exactly the same blue as its buttons and some of the flowers in its pattern. 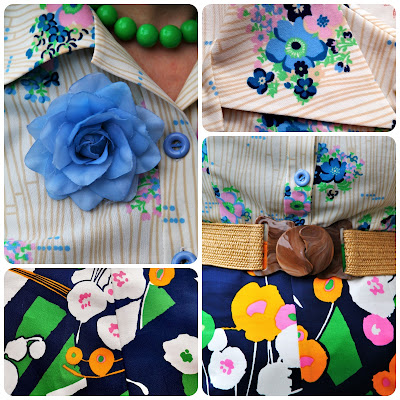 A pea green beaded necklace and my stretchy clasp-buckled belt completed my outfit. Oh, and have you noticed my green ankle boots? A lucky charity shop find back in February, their waxed nubuck exterior dictates they can only be worn on mostly dry days.

We hadn't gone on a charity shop spree for over a week, which obviously had to be rectified by not visiting one but two shops, striking it lucky at both. 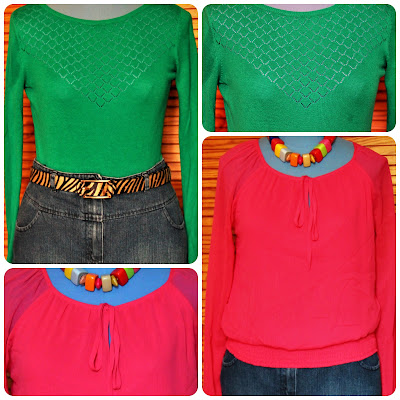 A rummage at the first shop yielded two tops, including a lightweight emerald green jumper, which I'd been on the lookout for for quite a while. I would have been happy with a plain one, so finding one with a diamond patterned yoke was a definite bonus.

I was also drawn to the bright pink peasant style blouse, which has an opaque bodice and see-through sleeves. 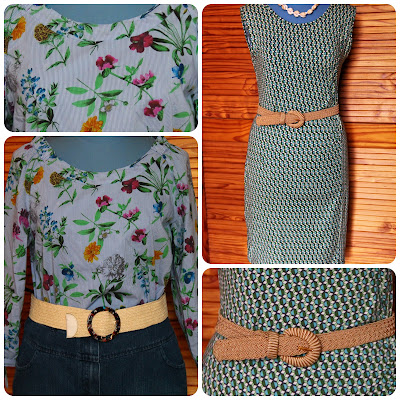 Another top came my way in the second shop, where I picked up this pale blue one strewn with Summer flowers. The sleeveless sheath dress is another King Louie one. I already have a blouse in the same pattern. 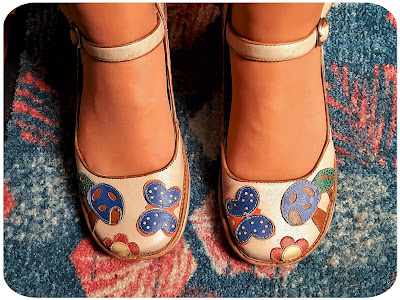 Last but not least is this pair of shoes! I normally wouldn't look twice at cream coloured shoes, but surely these are something else! The brand name (Soulier) is on the inside, but so far I haven't been able to find out much about them. Not easy, considering soulier is the French word for shoe! Anyway, they have a very 1970s looking block heel. I'll let you know if I can unearth more information on them.

And with that, we've once again come to the end of my post. I'll be back in a couple of days. Do stay healthy and happy until then, my friends.