Judging by the above definition, I can safely assume that it weren't June bugs who'd feasted on my leg during our walk two weeks ago on Sunday. What's more, it turns out they don't even bite!

So far, the pesky creatures who'd peppered my left leg with no less than eight angry red and extremely itchy welts in varying sizes, prefer to remain anonymous. 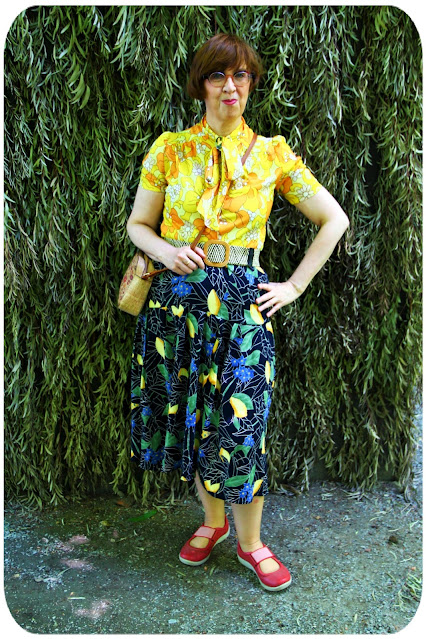 The itching started in earnest on Monday morning, but slathering the bites in Camomile and Calendula ointment seemed to keep the worst of it at bay throughout the day. However, the itching woke me up several times during the night, and the welts seemed to have increased in size by Tuesday morning.

Tuesday the First of June dawned sunny and blue-skied, though, so it would have been a shame to let a handful of insect bites spoil the day. As temperatures of up to 26°C had been forecasted, we decided to go for a walk in the morning while it was still relatively cool. 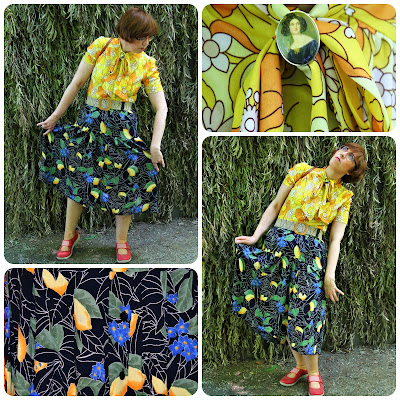 The viscose lemon and forget-me-not skirt I'd charity shopped the other day was just the right length to keep the unsightly red blotches on my leg covered up. I took the lead from the lemons for the vintage floral pussy-bow blouse in refreshing citrus colours I accompanied it with.

I added one of my stretchy chevron patterned belts, while the glamorous lady on my scarf clip kept the pussy-bow in check. First outing this year for my trusty Clarks Cloudsteppers! So comfortable for Summer walking. I do live in fear of them wearing out. 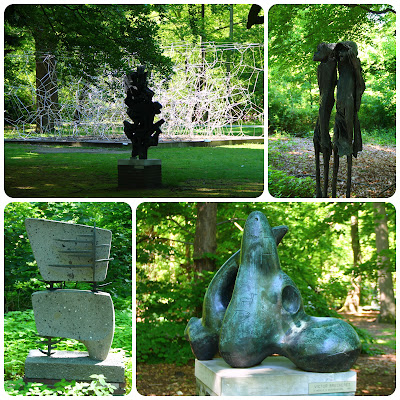 For fear of attracting more badly behaved creepy crawlies, we crossed off any nature reserves from our list of possibilities, opting instead for a civilized walk in the park.
Not just any park, mind you! Regular readers might have guessed already that this is Middelheim, the sculpture park I've already waxed lyrical about many times before.
That's Antony Gormley's Firmament III you can see in the background on the top left. 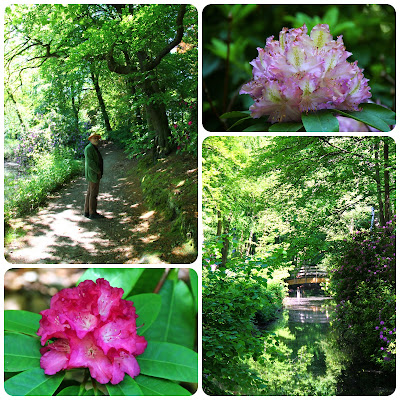 We just strolled around, taking paths willy-nilly, enjoying the banks of rhododendron, their majestic blooms sadly nearing their sell-by date.

On the bottom right, you can catch a glimpse of the Bridge Without a Name by Chinese artist Ai Weiwei in the far distance. 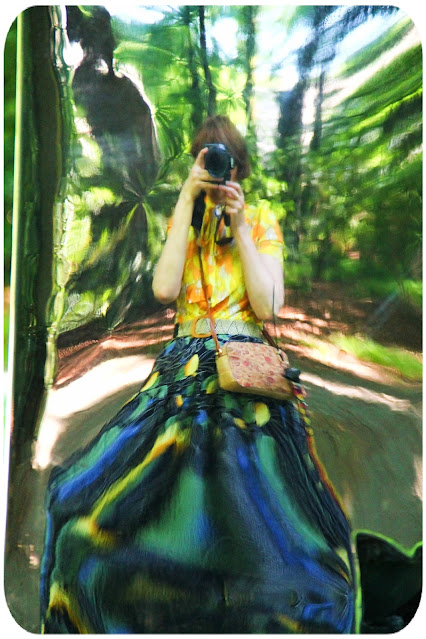 Somehow, we always seem to end up here at this fascinating polished metal column, a sculpture by Belgian artist Felix Roulin (1975). 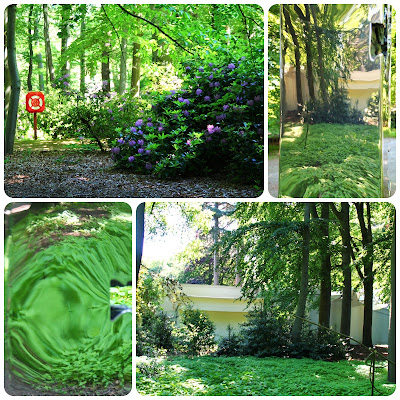 We always gravitate towards the Braem Pavillion too. Designed by architect Renaat Braem (1910-2001) and completed in 1971, it is a prime example of Organic Brutalist style.

At this time of year, it is almost swallowed up by the landscape, the surrounding trees and shrubs gently cloaking it in various shades of green. 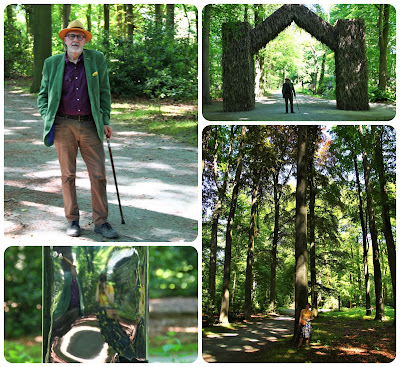 We marvelled at the tallness of some of the trees. Can you spot Lilliputian yours truly leaning against one of the trunks?

The triumphal arch (top left), covered in eucalyptus, is part of a current exhibition called Congoville.  It is called Flowers for Africa: Rwanda, and is a copy of the arch which was erected in 1961 for the festivities surrounding the proclamation of Rwanda's independence. 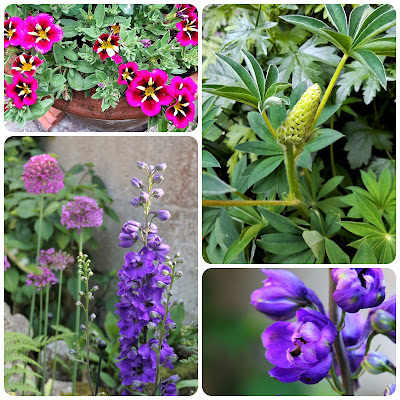 Back at home, the temperature steadily climbed towards the forecasted 26°C which, in our suntrap of a garden, always turns out to be at least two degrees higher.

Seemingly happy in its slug-protected planter, the Delphinium's deep indigo flower spikes are rivalling the Alliums in height. Did you know they are commonly called Ridderspoor (Knight's Spur) in Flemish?  I've always delighted in that name.

We were also overjoyed to finally see the first of the Lupine's flower spikes (top right) making a timid entrance.

Meanwhile, the Sweet Peas are in full stride, but at the time, there was still no sign of the Oriental poppies bursting into bloom. 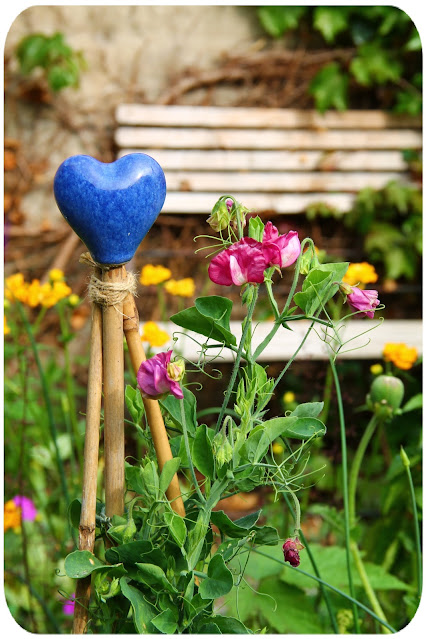 That afternoon, with the itching almost driving me mad, I walked into town and got some cream containing 1% Cortisone from the chemist. I'm glad to report this brought the swelling and itching down almost overnight. 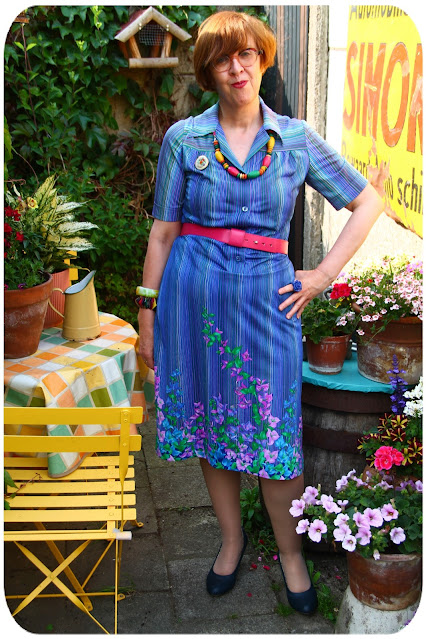 Fast forward to Thursday, the 3rd of June. It was a cloudy and humid day, but still with temperatures of about 25°C.

That morning, we had to get up really early, as Jos had to take the car to the garage for repairs. The previous week, while taking a shortcut on a quiet country road, a stone thrown up by a passing lorry had caused a crack to appear in our car's windscreen, Luckily, it won't cost us anything as we've got full insurance coverage.

While Jos was gone I chucked the things I’d bought at Think Twice into the washing machine and by the time I got dressed, Jos was back with a replacement car for the day. 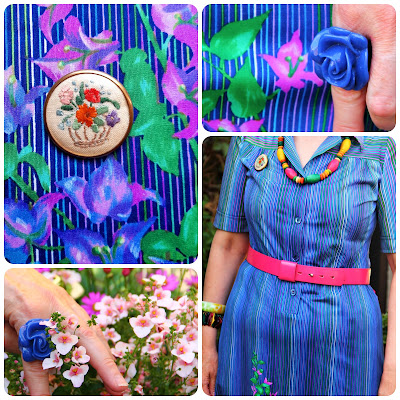 My outfit for the day consisted of a blue striped vintage dress with pink and purple flowers trailing towards its hem. More flowers were added with my brooch, a vintage one featuring miniature embroidery, and my blue moulded plastic flower ring. 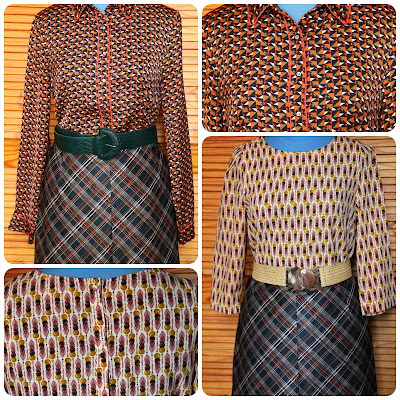 With the sky looking ominously and threatening rain, we took the replacement car for a spin, checking out a newly opened local pet shop and, almost inevitably, ending up at the charity shop.
Here, I picked up two long-sleeved blouses, a silky shirt in Autumnal colours by Belgian label CKS, and a funkily patterned smock-like top, closing with a row of fabric covered buttons at the back. Much to my amazement, the latter turned out to be H&M. 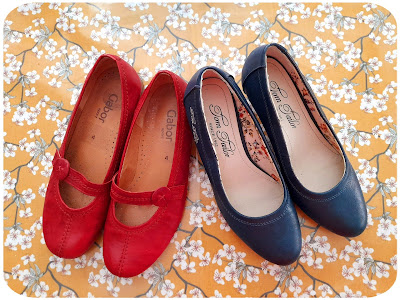 Browsing the full to bursting shoe shelves, I came across these two pristine pairs. The red ones are flat Mary-Janes by Gador, while the navy ones - which I'm already wearing in the outfit photos - are chunky heeled ones by Tom Tailor. Both were € 4,50, so just a fraction of their original retail price. Oh, how I love charity shopping! 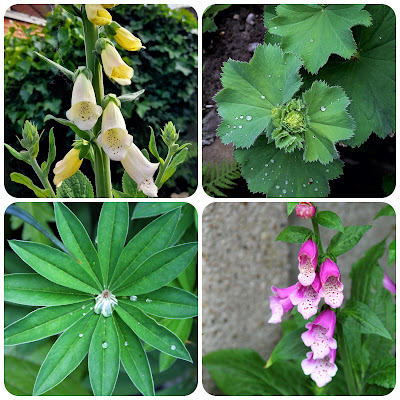 Apart from a couple of scattered drops, the rainclouds passed us by, although it did remain cloudy for most of the day.

Tiny it might be, but our garden still offers surprises at every turn. We've watched in amazement how the Foxglove which had settled itself in a raised border was reaching lofty heights. When its flowers started opening, we were delighted to see they were white rather than the more common pink.

Elsewhere, another Foxglove which we actually planted earlier this year turned out to have the most amazing purple-pink flowers, instead of the 'Dalmatian Peach' proclaimed on its label! 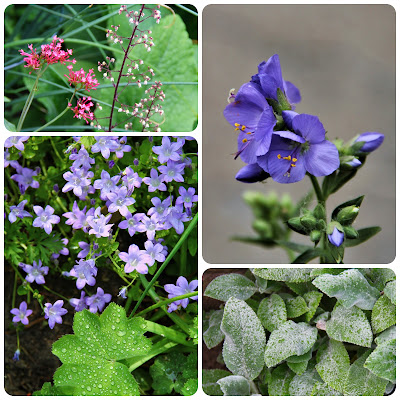 I love how our little plot is slowly but surely turning into a real cottage garden with its informal planting and mixture of colour, form and texture. Here, the last of the evening sun before it descends into the gloaming, is illuminating the view from the kitchen window. 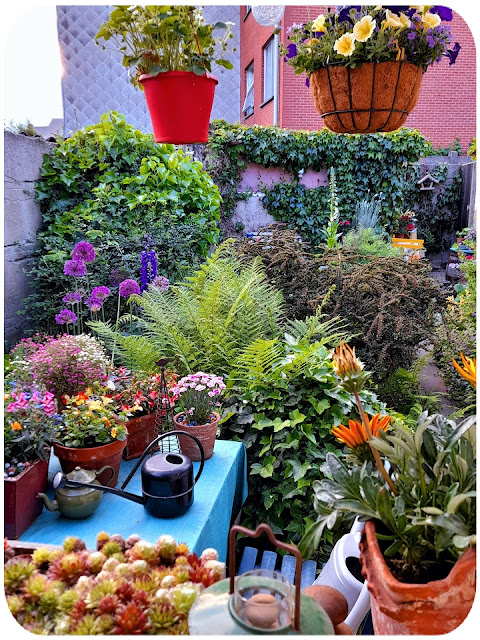 I'm leaving you now with an enigmatic photo I took with my phone one evening. At first, even Jos had a hard time solving the puzzle, as due to the reflections, the view is both inside and outside, or forwards and backwards.

I am standing at the end of the passageway which, together with the kitchen window and part of the houses beyond the garden, is reflected in the dining room window, where Bess sits looking out.

The two white rectangles just above Bess's head are the window and fan of our front door at the end of the hallway leading off from the dining room. To the right is our 1930s display cabinet, and the houseplant on the window sill, since moved out of Bess's way.

The orange on Bess's body is the reflection of the Busy Lizzies in the window box outside. The metal structure on Bess's left is outside too, as are the out of focus leaves of the Heuchera on the bottom right. 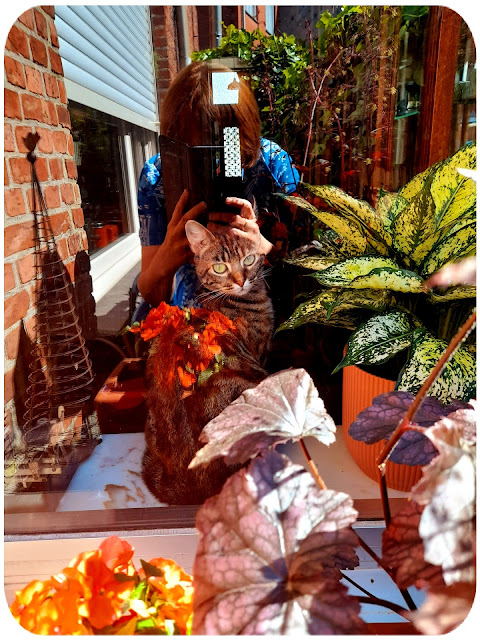 So, that's it for now. We will be in for a couple of hot days , so if I haven't melted by then I will be with you again later this week.

In the meantime, as always, do stay safe and keep your heads cool!

Posted by Polyester Princess at 19:07