How can it possibly be May already? It seems like only yesterday that this year's long awaited Spring took its first hesitant steps back in March.

So far, the season has been one of extremes. We had a handful of days at the end of March which felt more like the height of Summer than early Spring. Then, as if at the click of the weather gods' fingers, Winter made a come-back with a string of days barely above freezing point and showers bearing flurries of snow, sleet and hail.

April truly lived up to her reputation for fickleness, alternating sunny days with cloudy ones and the temperature going up and down like a yo-yo. Overall, it was quite a bit colder than average, the media trumpeting that it was in fact the coldest month of April since 1986. 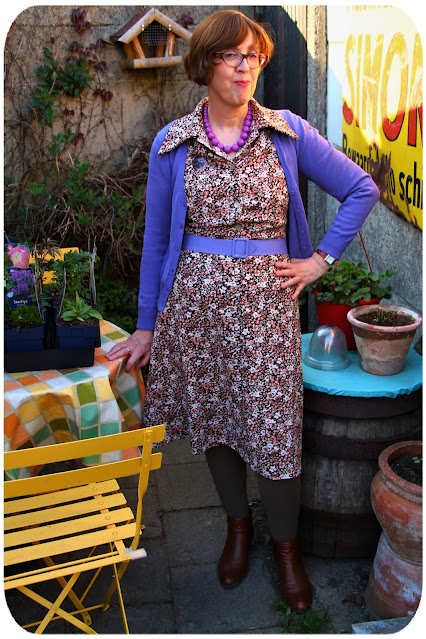 It's always a couple of degrees warmer in Dove Cottage's tiny walled garden, where the sun gets trapped, creating our very own micro-climate. Still, unlike last year, I was hardly in short sleeves at all, the first batch of Spring and Summer frocks in my wardrobe still waiting in vain for their first airing.

On Thursday the 22nd of April - as yes, my blog is still lagging behind - this is what I wore. Even with the temperature lingering in the low double figures, I'm still finding things to wear which hadn't yet seen the light of day. In fact, I seriously doubt that my vintage dress, with its muted brown and pink Millefleur print was worn at all since January 2019. 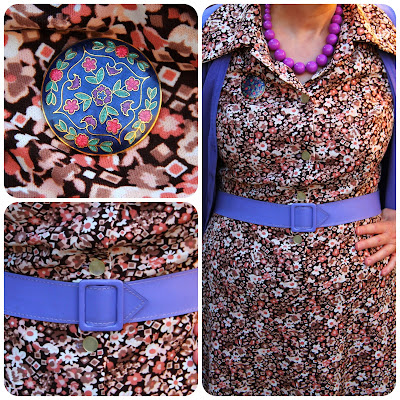 I opted for lilac and pink tones for my cardigan, belt and beaded necklace, which were all charity shop finds at one time or another. The enamelled floral brooch was a flea market find, if I remember correctly.
After uploading these photos, the tights I am wearing here had me stumped, as I didn't recall wearing grey ones. They are in fact, a pair of mid-brown semi-matte 40-denier tights. I guess it must be the contrast with the chocolate ankle boots which makes them look so washed out. 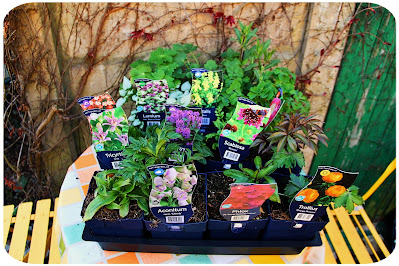 Thursdays in Spring and Summer are often synonym with a visit to the garden centre, which is exactly what we did that morning. With the extra space we created by clearing the ivy and dead wood waiting to be filled with plants, we once again made use of the garden centre's ongoing buy 5, get 1 free offer on perennials. We also picked up a bag of compost and some Begonias and Pelargoniums or annual Geraniums, the latter to replace the ones which had sadly died on us as a result of February's deep freeze temperatures .
As the weather forecast for the weekend was looking reasonably good, we decided to give my healing index finger some more rest and resume our gardening activities on Saturday. 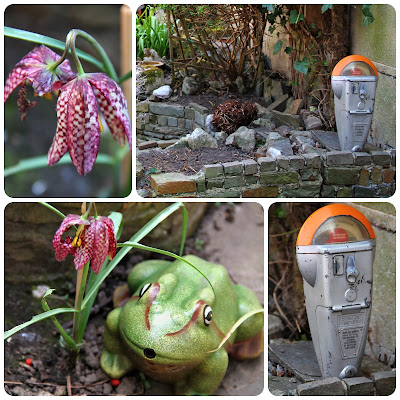 Meanwhile, I had a bone to pick with non-ribbeting frog! His only task had been keeping an eye on the twin flowers produced by our lone Fritillary bulb. Apart from mute, he seems to be blind as well as both flowers had opened by now with the one on the left having been half-eaten by a naughty garden pest. Grrr!
If you're wondering what an old-fashioned parking meter is doing in our garden, well, we are not sure either. The thing, which was gifted to us by one of Jos's friends back in 2017, had been wasting away in our garage ever since. It dates from the late 1950s, early 1960s, and in its former life it lived on the streets of Antwerp, when 5 Belgian Francs (the equivalent of about € 0,12) paid for 30 minutes' parking.
It had always been our intention to put it in the garden, but for some reason it never happened and we'd actually quite forgotten about it by now. The space where it found its new home used to be completely overgrown with ivy. It still has to be secured properly, though, and then perhaps have some greenery planted around it. 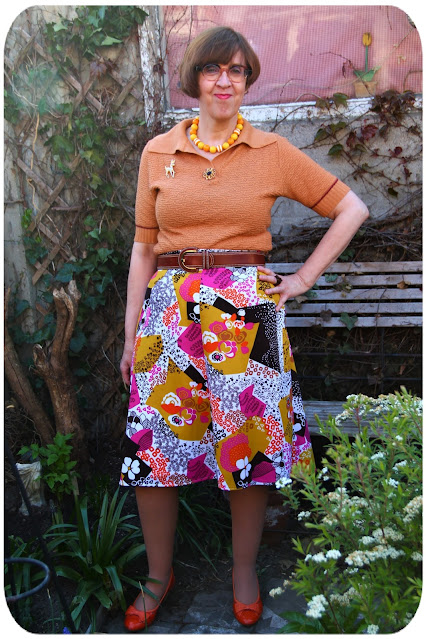 Saturday the 24th of April was exactly as promised by the weathermen: a sunny day with highs of 15°C.
I even daringly wore short-sleeves, although I still opted for the warmth of a jumper. It is vintage C&A, and its content label mentions 30% linen alongside the usual acrylic. I love its textured ginger knit accented with a berry stripe at the sleeves. It has the same stripe at the hip-line, which obviously you cannot see as I wore it tucked into my skirt.
Both the jumper and the skirt were Think Twice finds and it was their first outing in quite a while. Any attempts to describe the skirt's funky pattern would be futile, so I'm just letting you admire its crazy paving pattern and riot of colour. 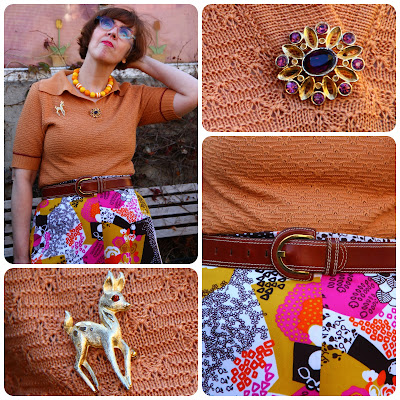 In order to curb its collar's floppiness, I secured it with a gold-tone and purple brooch, which I offered the company of one of my mini collection of Bambi brooches, picked up from a long-gone vintage shop.

The yellow, white and orange bubble gum balls necklace came from the same shop, while both the tan belt and orange shoes were charity shop finds. 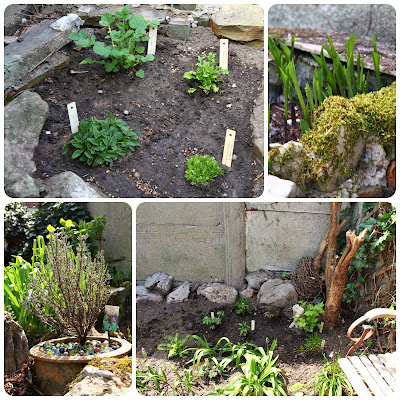 We had an extensive gardening session that morning, planting out the majority of the perennials we'd brought back from the garden centre. In the freed up border next to the bench we added Paeonia 'Bowl of Beauty', Aconitum carmichaelii 'Cloudy', Phlox 'Sweet Summer Wine' and Trollius 'Orange Princess'.

Three shade-loving plants, a foxglove, a toad lily and a purple flowering dead nettle, were planted elsewhere. Our final task was re-potting last year's butterfly lavender in a bid to revive it (bottom left). On the top right you can see some of the Lily-of-the-valley we inherited with the garden, which keep on popping up in the most unexpected of places. 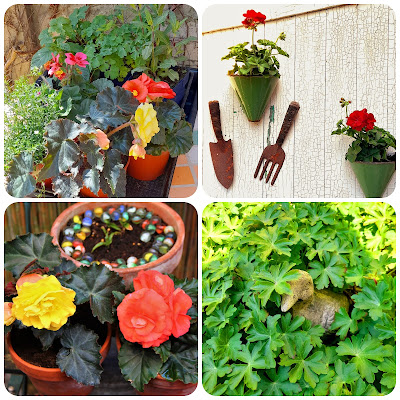 Our gardening pursuits continued on Sunday, which was still sunny but with a slight drop in temperature.
I planted up the green enamel cones hanging from the potting shed with new dark red double flowering Pelargoniums. The cones themselves are from the same vintage shop I mentioned earlier, and probably started life as lamp shades. On a roll, I also potted up the two Begonias and put them on the old chair in the passageway. The marble adorned pot behind them contains last year's toad lily, thankfully showing signs of life. 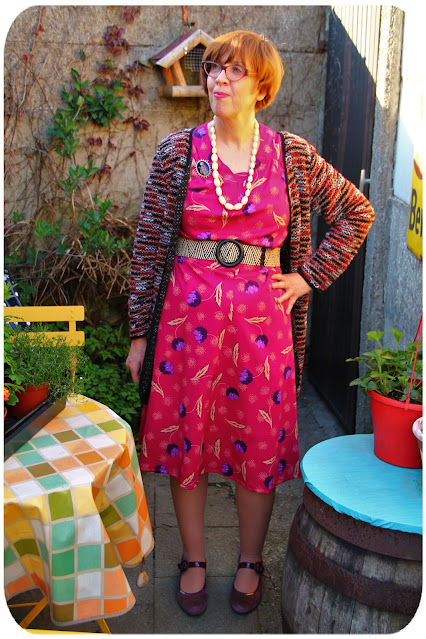 Back in long sleeves again, with a pink flower and foliage patterned dress found in a vintage per kilo shop in Antwerp several years ago. I added a cream beaded necklace and a heavy silver-tone rimmed floral brooch which doubles as a pendant. The brooch is marked 'SARAH GB' which should be one of the marks used by Sarah Coventry. Founded in 1949 by Charles Stuart, Sarah Coventry's name was the combination of his granddaughter’s first name and the town of Coventry in England—where the Stuart family had emigrated from to the US. The jewellery was sold via house parties a la Tupperware and Avon. 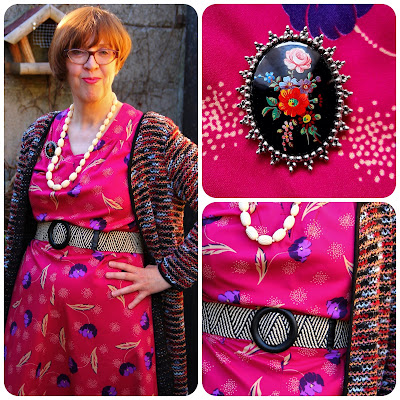 Further components of Sunday's outfit were one of my stretchy chevron patterned belts and a multi-coloured slubbed cardigan by Only, both of which were charity shopped. The plum coloured Hotter shoes were a € 2 flea market find back in May 2018. 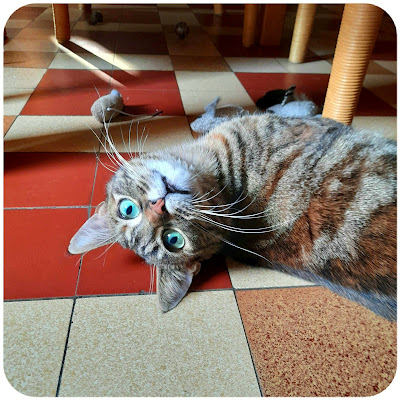 Don't forget to mention me! Of course we won't, Bess, how could we!

She's currently on a voyage of discovery around the house and this morning she woke us up at an ungodly hour by chasing her tail across the bed! 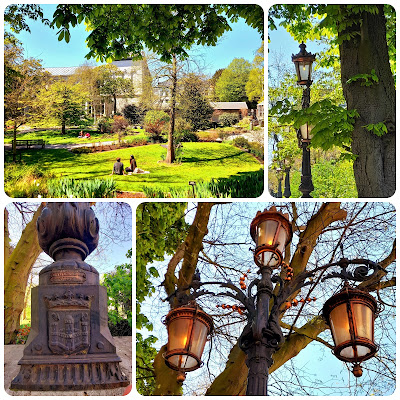 Monday the 26th of April was another glorious Spring day echoing Sunday's temperature. Still quite chilly at 3°C in the early morning. I was wearing a scarf and beret but when I was waiting at the traffic lights near my office I was actually regretting not carrying a pair of gloves!

Office days usually do not get a mention here, but as it was a quiet one and the weather too good to stay indoors, I went for a walk during lunch break, making my way to Antwerp's Botanic Garden. 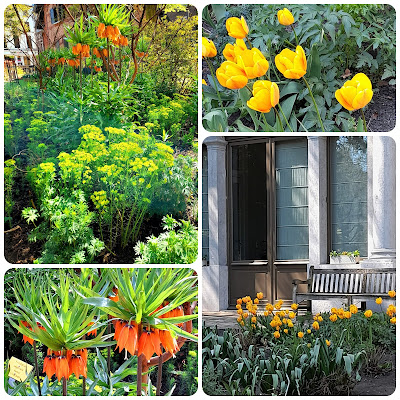 In spite of this little gem only being a couple of minutes' walk from Antwerp's main shopping street, it wasn't overly busy, with just a handful of people having lunch or sunbathing on its benches and diminutive main lawn. There was even an empty bench with a view to some yellow tulips. 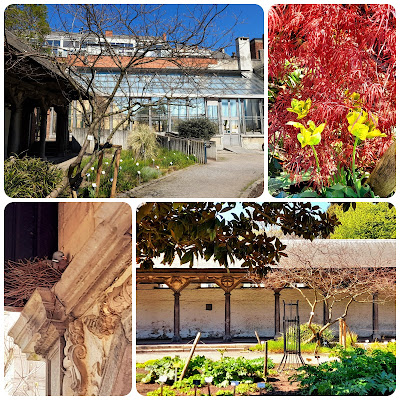 I had a leisurely wander around admiring the Spring blooms, being particularly enamoured by the magnificent orange Fritillaria imperialis rising from a sea of acid yellow Euphorbia captured in the previous collage.

The garden holds a collection of 2000 plants, with a collection of cacti and other exotic plants in the conservatory, part of which is visible on the top left in the above collage. 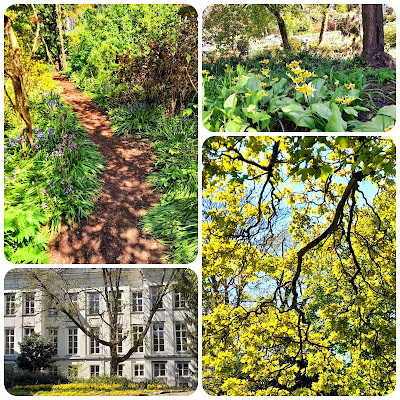 Adjacent to the street, although well below street level, is a meandering woodland path lined by bluebells and dog tooth violets (Erythronium), where it's easy to forget this is actually smack dab in the middle of a busy metropolis.

Before leaving, I briefly walked into the courtyard beyond the garden. For two years in the early 1980s, I used to go to school in the white building which backs on to it, its classrooms offering a secret view of the garden. Heady times holding poignant memories.

I'll be back within in couple of days. In the meantime, as always, please do stay safe, sane and sensational!

Posted by Polyester Princess at 19:05