I've been very prone to mood swings lately, the pendulum often swinging towards anxiety. The least little thing seems to get me in a huff and believe me, you don't want to be around me when I'm like that.

Mercurial at the best of times, my temper is my own worst enemy when my stress levels go into overdrive. The pandemic and its seemingly never-ending implications might be the worst offenders, but give me a string of sunny Spring days, and I'm right as rain again.

Oh the weather, so much to answer for!

But there are still many things to be thankful for, so let's start with those, shall we?

Jos has had his first dose of Pfizer vaccine yesterday, and doesn't seem to be acting any stranger than usual today. That doesn't mean I'm no longer stamping my feet in frustration like a petulant child at the slowness of our vaccination roll-out though, but still, it's a step in the right direction. Oh, and then there's Bess, who is filling our hearts with gladness, especially now that she has discovered the joys of petting! 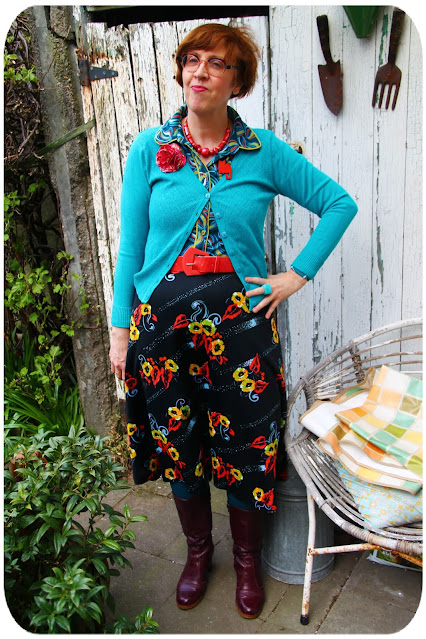 But first, let's go back in time once more, to Easter Monday to be exactly. If at first glimpse it might look like a perfect specimen of a Spring day, don't be fooled! Not only was it quite chilly at a measly 7°C, a blustery wind was tugging at my hair and trying to put my clothes into disarray.
We would be treated to a succession of snow flurries and hail that day, so it was nothing short of a miracle that we found a dry moment in which to hastily nip outside and quickly snap some photos to show you my outfit.
I didn't take off my cardigan, though, so I've added a close-up of my blouse's funky pattern to allow you a better look. The blouse in question was a flea market find. I instantly recognized it as I have a dress in the same pattern, with red trim and buttons rather than the blouse's yellow. It's from a retro label called Zoë Loveborn, and at the time I patiently waited for the dress to go on sale before snapping up the last one in my size. 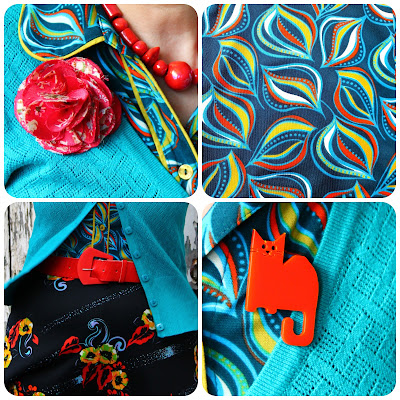 It isn't the first time I wore the blouse with this vintage Diolen skirt, as I think they're a match made in heaven. For warmth, I wore a turquoise cardigan on top, tying in with the turquoise in both the skirt and blouse. The cardigan is from the Belgian Sweet Soda label and was charity shopped, as were the belt and necklace.

Both the flower corsage and brooch were retail buys. I'm sure you'll recognize the latter as one of the three brooches I bought from Katshop the other week. 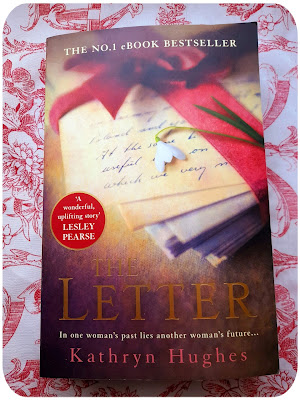 The day being too cold and miserable to even contemplate doing anything outside, most of it was spent reading on the couch. I picked up The Letter by Kathryn Hughes during one of our last charity shopping trips before our current lockdown. It was exactly the feel-good read I needed after the more challenging non-fiction Brides in the Bath one.
As Monday was a public holiday, I had to go into the office on Tuesday instead. The weather was even more miserable than Monday's - and several degrees colder to boot - which wasn't exactly helpful at getting myself out of bed that morning. On top of that, I had to make some changes to my outfit at the last minute - I was taking the easy way out by rewearing Monday's outfit - when the zipper on my skirt came apart. 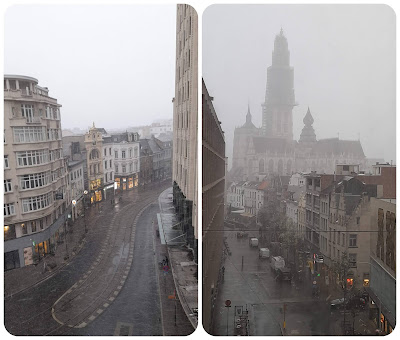 Work wasn't all too busy though, which is always a blessing when one's head is full of cotton wool.
Snow flurries drifted past my windows and there was hardly a soul brave enough to venture out onto Antwerp's forlorn looking streets. Even the cathedral was hiding behind a veil of mist, a sensible thing to do with scaffolding disfiguring its tower. 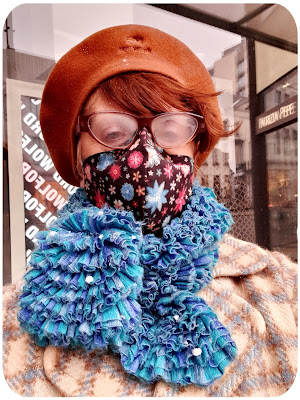 It briefly cleared up during the afternoon, but as luck would have I'd only just stepped outside after work, when the heavens opened again and gleefully pelted me with hail. I took a selfie while waiting under a shop's awning for Jos to arrive, my scarf temporally decorated by hailstones, which had lodged themselves into its frills, and my glasses typically misted up as a result of mask wearing. Life would be so much easier if I had 20/20 vision. Or, alternatively, if Covid-19 didn't exist! 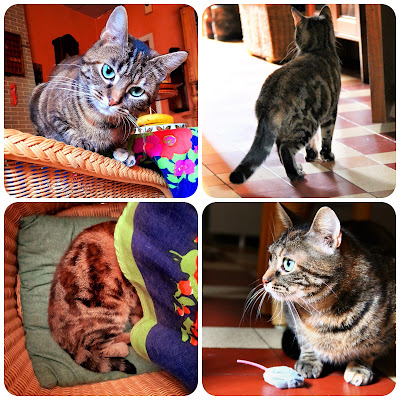 Let's end the day with a ray of sunshine courtesy of Her Royal Highness, Princess Bess.

This was before her petting days, but look how confident and adventurous she is becoming. Of course, after all those shenanigans, she needs her beauty sleep. Here you can admire her unusual mix of pattern and colour. 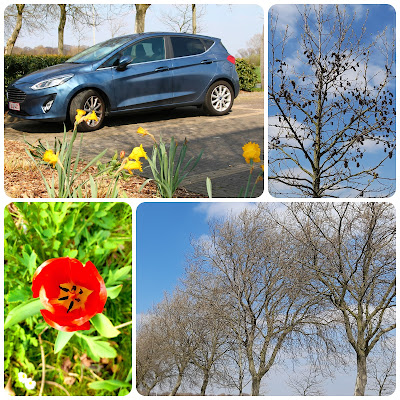 Wednesday was another office day, and as I'm not used to working two consecutive days, I was more than glad when Thursday finally arrived.
We were just about to get up when all hell broke loose and the intermittent man-made earthquakes caused by the piling machine across the road started in full force.
After a couple of hours, I was starting to feel quite dizzy and nauseous - exacerbated by worrying about the effect it would have on Bess - so that at one point we desperately needed to flee the house.
Less than 15 minutes by car from Dove Cottage, the site of the Art Deco water tower in the neighbouring village of Reet turned out to be the perfect getaway. 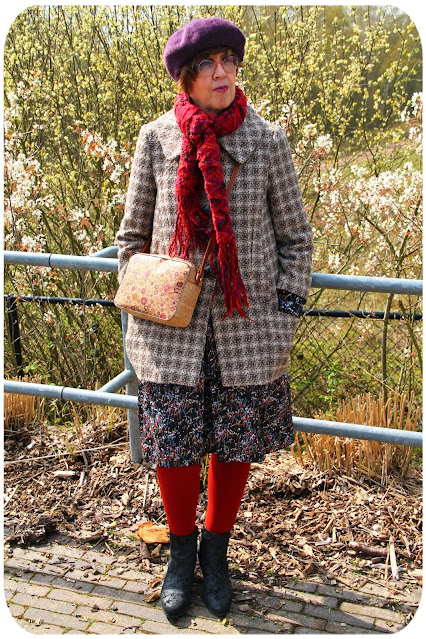 In spite of the glorious sunshine, they day's highs of 10°C were still accompanied by the blustery wind which had been plaguing us for days. In my hurry to escape, I'd forgotten to add the cardigan I'd planned to wear. On its own, my coat - a short, brown and cream checked swing coat from the Spanish brand Sfera, charity shopped in February 2018 - was barely sufficient to keep the chills at bay. 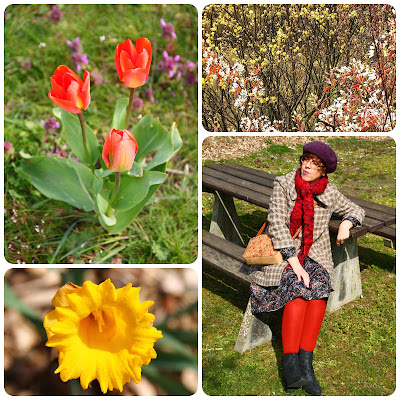 It was OK as long as we were on the site's lower levels, where we briefly basked in the sunshine at one of the picnic tables while admiring the blossoms as well as the sparsely planted frilly yellow daffodils and bright orange-red tulips. 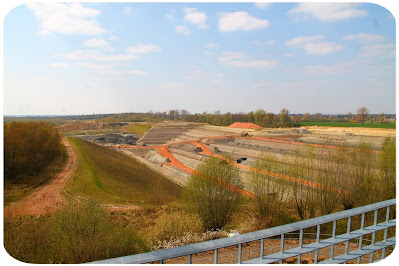 The gate to the cage-like structure containing the staircase to the tower's top was open for once, so it would have been silly not to climb them for a panoramic view of the clay-pit scarred landscape nestling in nature's fresh Spring greens.

We watched cotton wool clouds scudding across a sky of blue and wind turbines gaily waving their arms, but it was too cold to stay up there for very long. I was even starting to regret not wearing gloves! 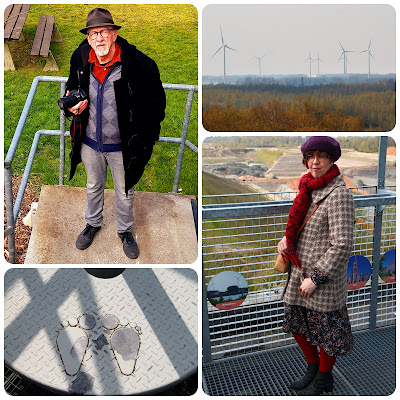 Safely back on ground level - those see-through stairs remain quite scary for vertigo sufferers - we found a sheltered spot where I was able to remove my coat and show you the dress I was wearing underneath. This is another wardrobe stalwart, vintage and handmade, its print a fireworks of blue, red and white dots and dashes on a black background. 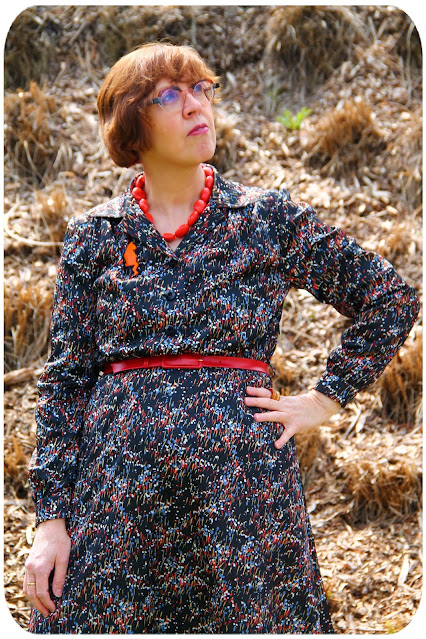 My accessories were a red belt and necklace, which were both charity shopped at one time or another, and another one of my recently acquired cat brooches.

Back at home, we were greeted by a scary-eyed Bess and the sight of two repro advertising signs which had toppled to the kitchen floor, dislodged by the eternal shaking caused by the infernal machine.

In a huff we stormed off to the construction site, where much to our relief we were informed that they had almost finished. True to their word, Friday was an oasis of quiet, with both the site and our two-doors-down neighbour's kitchen extension works at a welcome standstill. 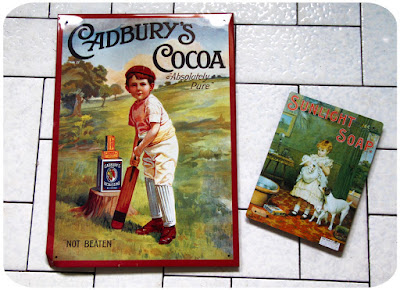 Unfortunately, I had another office day to look forward to, half of which was spent with a lingering headache. To make matters worse, it was a sunny day, while the weather forecast was for a washout on Saturday.

In spite of the inclement weather, this turned out to be quite a good day.

At first I couldn’t settle to anything, but then I decided to make a start with the seasonal wardrobe changeover.

Fairly confident that I wouldn't be needing them again until next Winter, I pulled all my warm woollen and polyester frocks from my wardrobe, making piles of them ready for the vacuum bag, and replacing them with the first batch of short-sleeved frocks. 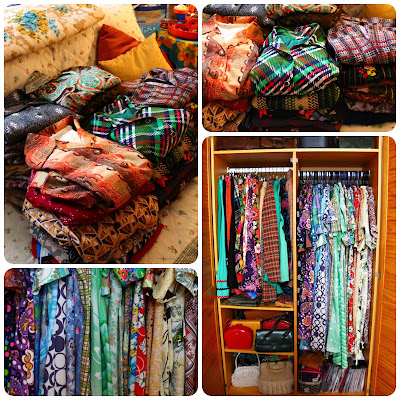 As usual, I'll keep working on this bit by bit until Summer is well and truly on its way, but at least I've taken the first step, which always seems to be the hardest. It is, after all, quite a daunting task when you have a maximalist wardrobe! 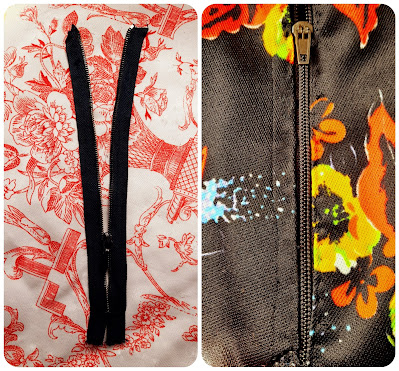 I then had a look at the busted zipper of the skirt I wore earlier that week, wondering if my limited sewing skills would extend to replacing it. It was worth a try, especially as I found a black zipper in the correct size in my stash. And you know what, it was surprisingly straightforward. Not perfect, perhaps, but who cares? The skirt's got a working zipper once more! 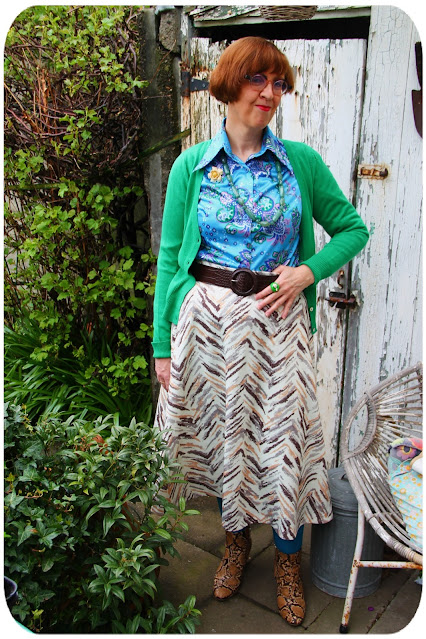 That only leaves Saturday's outfit. However, as the weather remained truly horrendous all day, we didn't have a chance to take photos. So, showing true blogging dedication, I wore it all again on Sunday, before changing into that days's outfit.

I've had the skirt, with its impressionist chevron pattern, earmarked for while, and although I initially had a more Springlike outfit in mind, I found it a perfect companion in the form of this turquoise based Paisley patterned blouse.

Both are vintage finds from Think Twice, but while the blouse, with its satin-like fabric, has lost its contents label, I was surprised to see that the skirt contained 12% silk alongside its ubiquitous polyester. 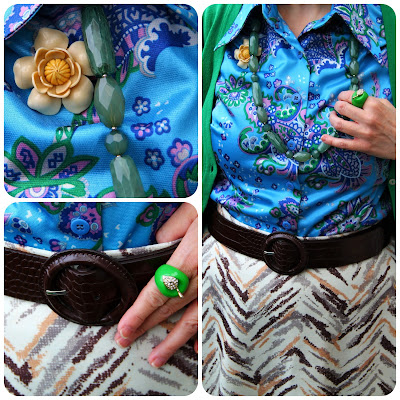 More turquoise was added in the form of my opaques, while I picked up the green in the blouse's pattern by adding a green cardigan, necklace and apple-shaped ring.

The cream background of the skirt was echoed by my vintage flower brooch, while the chocolate brown in its print was highlighted by my moc croc belt. The belt and snake print ankle boots, along with the opaques, were the only retail items in my outfit.

I'll be back with more outfits as well as a return to the garden in my next post. Do stay healthy and happy, wherever you are, and let's keep our fingers crossed we'll all have our jabs before too long!