It never rains but it pours

Now that the sun has decided to stop playing hooky and the rain clouds have been put in the naughty corner for now, it is starting to feel a bit more like proper Summer. If the weather forecast is to be believed, however - and annoyingly, they are usually right when bad weather is around the corner - it won't last and there'll be more rain coming our way later this week.

Meanwhile, waking up to sunshine is a great mood booster, so I'd better make the most of it.

It was a totally different story on Tuesday's day off last week, when it rained on and off all day, only stopping now and again for a short breather. 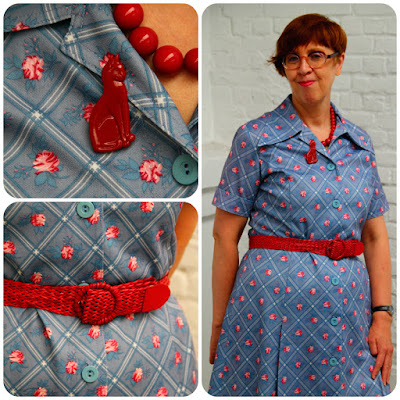 In fact, the weather was so horrendous that we didn't get to take outfit photos in the garden as we're used to. But as - shock, horror! - I wore the same outfit to the office the next day, we remedied this by making use of our garage's "photo studio" after work.

I was wearing a pale blue Diolen dress with a trellis and roses print, a deadstock find at an outdoor flea market back in May 2018. It came with its own belt, but as usual I decided to replace it with a contrasting one from my stash, picking up the darker shade of the roses in the dress's print. I kept to the same ruby red colour for my necklace and cat brooch. 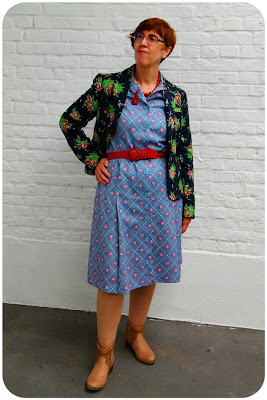 On my feet, my trusty pair of biscuit coloured ankle boots. OK, they are Summer boots, with decorative woven panels, but boots nonetheless, while by rights I should be wearing sandals this time of year. Most of the latter are still wasting away inside their boxes.

The navy jacket with its posies of tulips and lily of the valley are originally from Zara, but found in a charity shop in Welshpool last Summer. 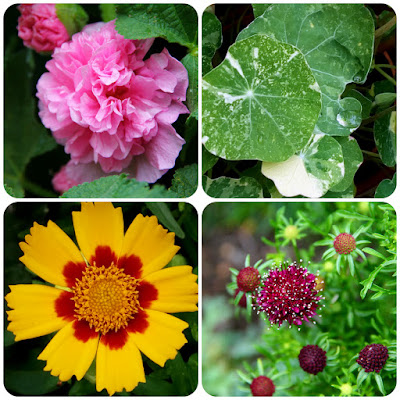 But back to that grey and wet Tuesday! Briefly venturing into the garden between showers, I was delighted to see that, finally, the first of the buds in our long-suffering Hollyhock had burst into life. It's a pink Charter's Double (top left), and aren't those blowsy blooms magnificent?

On the bottom left is a close up of one of the flowers of our new Coreopsis, which is blooming away happily after we rescued it from the plant nursery the week before.

I was also pleased to notice that one by one, the pincushion-y flowers in our Scabiosa 'Barocca' (bottom right) were showing their pretty little faces. 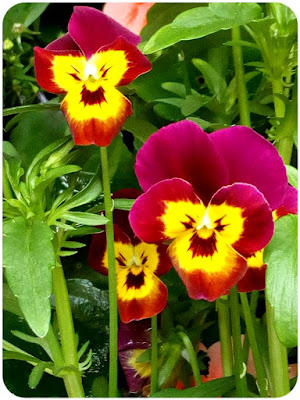 And speaking of faces, what do you think of these? They were watching us imploringly through the kitchen window, so I went outside to snap them and post them on Instagram. Angry flower fairies fed up with rain! 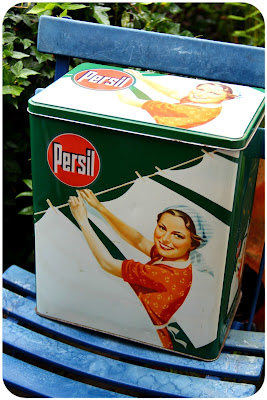 As it was clear by now that any gardening or other outdoor activities would have to be put on the back burner, I thought I'd make a start with a cleaning and decluttering session in our spare room.

This room, which doubles as a dressing room and study, is quite large at 4 by 4 metres and due its seemingly endless size has been used as a glorified dumping ground for anything we haven't got space for elsewhere. Seriously cluttered, it was time to bring some order to the chaos.

So, armed with cleaning cloths and polishes, which live in the large reproduction washing powder tin above, I made my way upstairs. 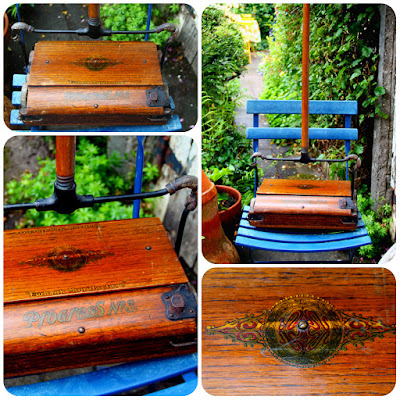 The first thing that caught my eye was the antique wooden carpet sweeper which was gathering dust in a corner. A lucky find in a consignment store, it has been living with us for at least 15 years. It's a 1920's Ewbank Progress No. 3, although at the time of purchase Ewbank themselves, whom we emailed asking for information, wasn't able to date it accurately.

It was on display in a corner in our kitchen for many years but after it had to make way for a cabinet for our Boch dinner services, it was moved several times, eventually ending up in the spare room, where sadly it had to share its limelight with Phoebe's upstairs litter tray. 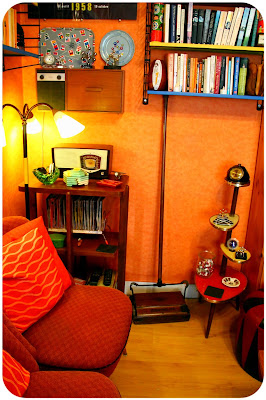 Feeling sorry for this magnificent piece of bygone household equipment, not to mention more than just a tad guilty at neglecting it, we brought it downstairs and gave it a thorough clean and polish.

With room in our kitchen still at a premium, it is now taking pride of place in our sitting room, where it is enjoying its retirement, as there are no carpets to sweep here! 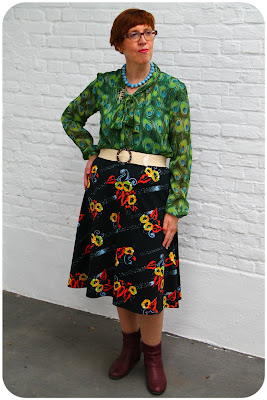 Typically, Wednesday's office day was a dry and sunny one, and while I was slogging away at the office, Jos packed some sandwiches and enjoyed them at the water tower's picnic area. Lucky him!

I was adamant we do the same on Thursday, but as luck would have it, it was another dark and rainy day. I even dug out my burgundy ankle boots, which I'd put into hibernation at the end of May. 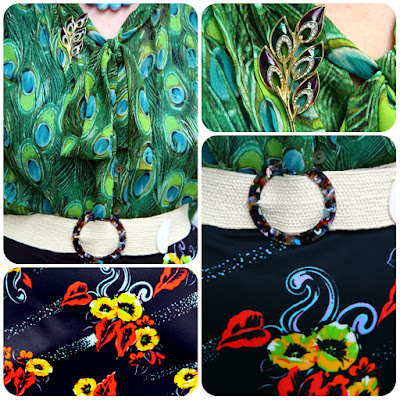 I was wearing a layering t-shirt under my gauzy peacock feather print pussy bow blouse, found at our local flea market. I added an iridescent peacock feather brooch, charity shopped in Llangollen last Summer, to keep it company.

The skirt, whose blue swirls linked with the blue in my blouse, was a Think Twice find. More blues appeared in the belt buckle and beaded necklace. 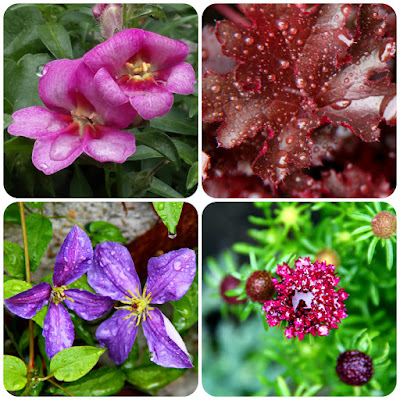 The garden was looking a bit drowned with all that rain, so wouldn't require any watering that day.

Instead, we thought we'd try out another charity shop, a large two-floored one on the outskirts of the nearby town of Mechelen.

Big mistake! First we ended up in a queue on the way up, were then seriously thwarted by the heavy traffic on the industrial estate the shop is situated on and, when we'd finally found a parking space and were waiting for a sanitized trolley, I had to admonish the man behind me who was coming too close for my liking. 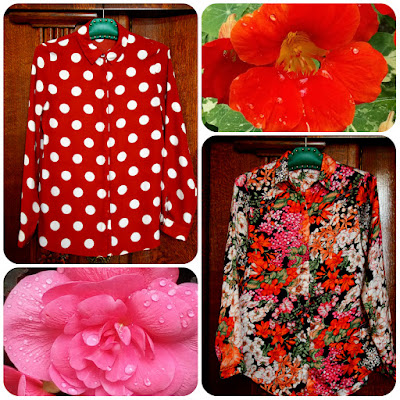 And although it wasn't overly busy in the shop itself, the confusing layout was seriously putting us off.  It was slightly better in the clothing department on the second floor, but then there was a man with a coughing fit, so we beat a hasty retreat.

I still managed to find two shirts and two skirts, but we've definitely scrapped this particular shop from our list for now. 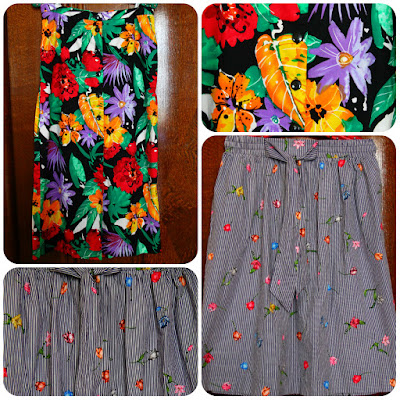 Feeling more than just a bit disgruntled, we returned home where we decided to continue with project spare room.

Hidden away in the same corner as the carpet sweeper was an old IKEA CD storage unit, which we were using to display our collection of View-Masters, most of which we picked up at charity shops and flea markets over the years. 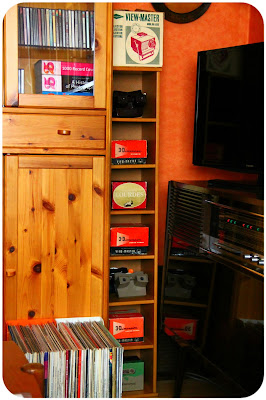 Perfect to fill the gap between the pine cabinet and our vintage radiogram doubling as a TV stand, we moved it to the sitting room where its contents will finally get the attention they deserve. 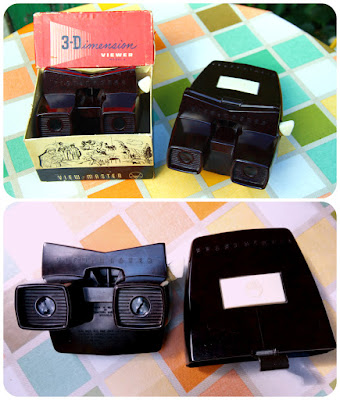 Jos's 1950s Bakelite model E View-Master, still in its original box, is on the left, while next to it, you can see the same model with a battery operated light attachment, enabling you to watch your viewmaster reels without having to take into account your environment's light conditions. 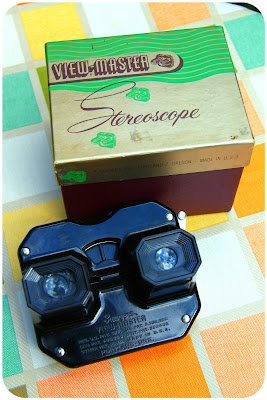 The View-Master Model C, which came in both brown and black Bakelite,was produced between 1946 and 1955 and was the first viewer to have a slot into which the reels were placed for viewing.

The older models opened up like a clam shell and I expect they are quite rare. 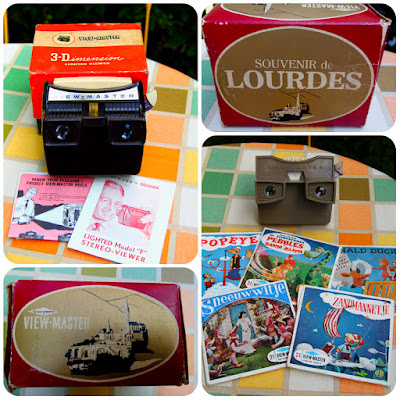 On the top right is Model F, a lighted viewer which was produced between 1959 and 1966 and the the last of the View-Masters to be made from Bakelite.

Bottom right and top left is a Lourdes souvenir viewer still in its original box and, finally, on the bottom right, you can see my very own childhood viewer. The Model G was produced between 1959 and 1977, and was made from a lightweight plastic. Although it came in many different colours over the years, mine was the original boring beige. The reels are also my original childhood ones. 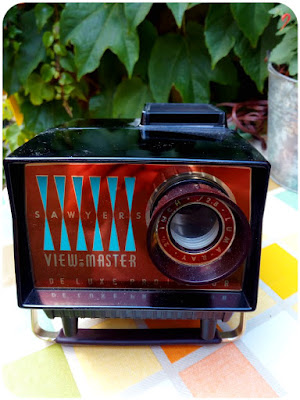 Sitting on top of the CD unit is a boxed View-Master projector, the Sawyers Deluxe - the envy of many at the time - dating from the late 1950s, early 1960s.

Found at a charity shop retro event, we had quite forgotten that the box still contained a spare bulb as well as some sets of reels, including one about Antwerp.

As we haven't finished decluttering in a long time, who knows what treasures will see the light of day.

I hope to see you again for my next episodes of adventures in a couple of days.

As always, do stay safe and fabulous!