Just like the weather these days, my mood is like a yo-yo, up one minute and down the next. My mind keeps scrambling around for bite-sized chunks of positivity to hold on to, little nuggets of gold to obscure the black thoughts hiding in its dusty corners.

I had been doing so well, congratulating myself with how I was dealing with the stress caused by the pandemic and its implications. After the initial weeks, I seemed to be taking it all in my stride, relishing the unprecedented amount of time on my hands. Keeping my news intake to the bare necessities and avoiding negativity like the plague. Or, more aptly, the virus!

And then, oh joy, we reached a plateau here in Belgium. Infections were going down day by day, and rules were relaxed left, right and centre. If initially I was skeptical about the latter, after a few weeks I was more than ready to admit I'd been wrong to have my doubts. Lately though, it seems I was right after all. For the past two weeks or so, cases in Belgium have been steadily going up again, and while my I-told-you so's are neither here nor there, I do despair at some people's selfishness and stupidity. 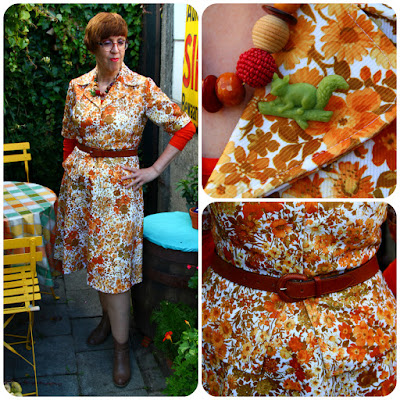 My overall mood on Friday before last matched the greyness of the morning, and it was clear that some serious colour therapy was in order to get the day off to a reasonable start.

At first sight, you might be forgiven for thinking that I'm wearing one of my trademark flower infused dresses, but looking closely you will notice it is actually a short-sleeved skirt suit. Another one of my Diolen delights, it was a last chance buy at Vintage Styling before they closed down. It had become a tiny bit too tight over the years, so I was delighted to find that both the A-line skirt and the jacket with its little peplum were once again a perfect fit.

I wore an orange long-sleeved t-shirt underneath and accessorized with a tan belt, a multi-coloured and textured beaded necklace and a green squirrel brooch. 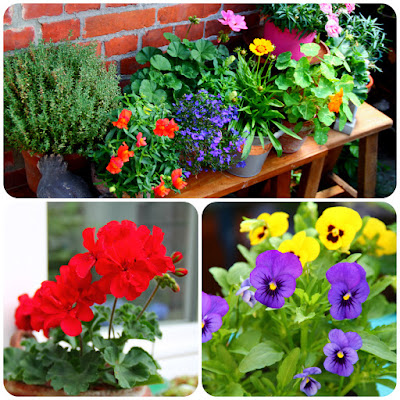 Although it remained mercifully dry all day, the sun only managed to put in an appearance by early evening, just in time for my daily watering session.

The plants on the new tables are a joy to behold and include Coreopsis 'Baby Gold', which is the one with the single yellow flower. Rescued from the plant nursery the day before, it seems to be feeling quite at home, as many more of its flower buds have burst into bloom at the time of writing. 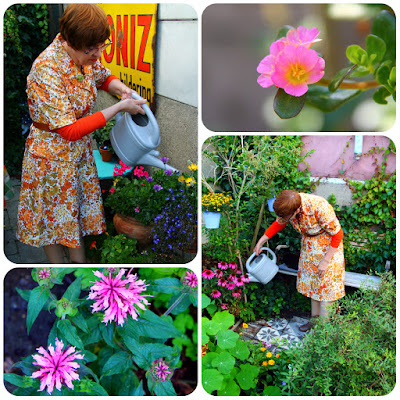 After breakfast that morning, we decided to try out another one of the charity shops which we deemed safe to visit. Again, social distancing was generally adhered to, although there were quite a few people not wearing a mask. Oh well, this would be a thing of the past from the next day onwards, when masks would become compulsory in shops. 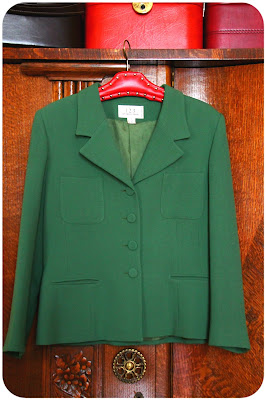 I'd been craving a Breton style top, so I was happy to come across this bright blue one. And I've always got space for a funky print shirt in my wardrobe. 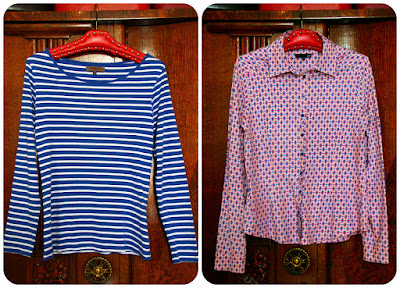 We woke up to sunshine for a change on Saturday. Sunshine and clouds kept playing a game throughout the day, however, with the odd bit of rain thrown in, while the mercury climbed to a warmish 21° Celsius.

The dress had its lining peeking out from under the hem, so I shortened it back at the tail end of May in readiness for imminent wear. But then the weather changed, and the days turned into weeks, and in the end I hung it back in my wardrobe. 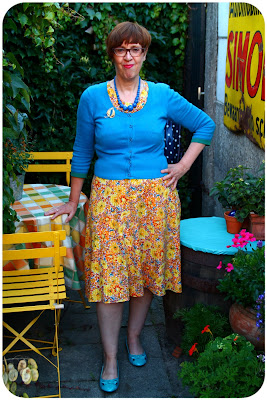 It was a charity shop find in the depths of Winter a couple of years ago, and has been making regular Summer appearances ever since. In cheerful yellow, I picked the bright blue from its print for my cardigan and necklace. To the cardigan, I pinned a gold-tone leaf with a row of tiny turquoise beads.

The blue skinny belt came with the vintage Trevira skirt I charity shopped last week, and which I will be wearing later in this post. 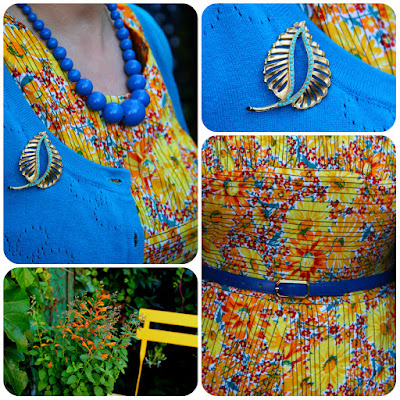 After a breakfast of omelettes with bacon and mushrooms, we went into the garden to plant out everything we'd bought on Thursday, adding several plants to the Clematis border and elsewhere. 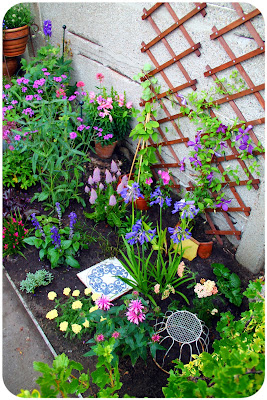 Clockwise from top left are some of our new arrivals, including Sea Holly (Eryngium), Stokesia, Malva and a peach coloured Achillea. A week on, and all are doing well, even though the Achillea has some slight slug damage. 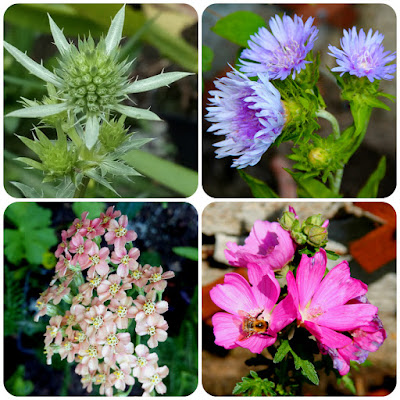 I also planted Potentilla 'Miss Willmott' in the rock garden, next to the abundantly flowering Gaillardia. It is the plant in front of the stone sun ornament and will have saucer-like pink flowers in late Summer. 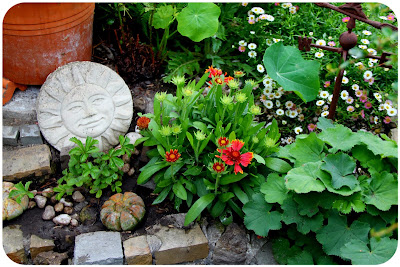 In the meantime, Jos picked a whole colander (just under 1 kg) of white currants and made another batch of jam. It started clouding over and drizzling while he was sitting outside painstakingly removing the stalks and had only just finished in time before the precipitation developed into a full-blown shower. 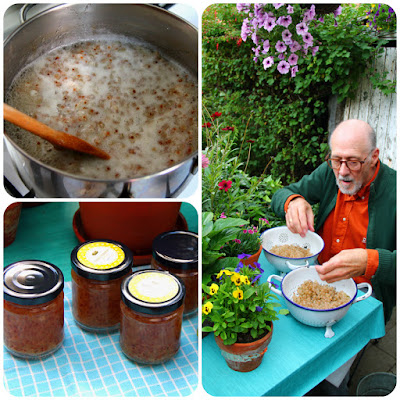 A bout of cabin fever made us venture outside Dove Cottage's confines on Sunday morning.

It was sunny with the odd patch of puffy clouds and forecasted highs in the low twenties. The perfect weather, in fact, for a stroll through one of Antwerp's most enchanting parks, which effortlessly combines art and nature: Middelheim.

If you ever find yourself in Antwerp, this certainly is a must-visit, as it is not just your run-of-the-mill park, but incorporates an open air museum of sculpture.

As it's only a 15-minute or so drive for us, we visit it regularly throughout the year, so those of you who have been following my blog for a while might remember some of my previous posts about this amazing park. 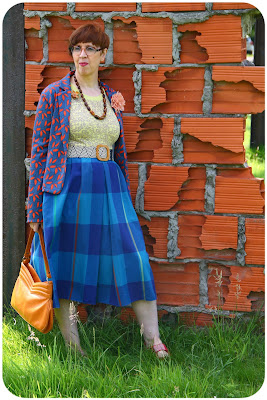 This time, we approached the park from the eastern entrance, where one of the first sights that greet you, after the iconic entrance itself (see here), is what looks like a building under construction, but is actually another work of art, The Passage of the Hours, by Portuguese artist Pedro Cabrita Reis.

One of its unfinished brick walls was perfect for showing you my outfit, which was built around the vintage Trevira skirt I found at a charity shop earlier that week. 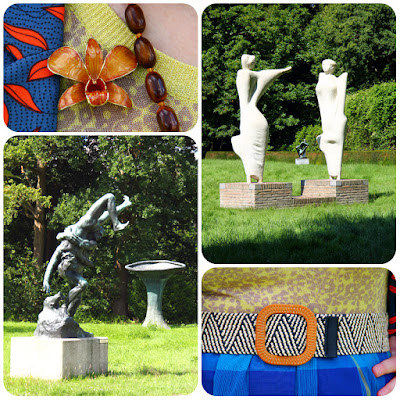 Except for the shoes - my trusted Clarks Cloudsteppers - the belt, and perhaps the flower corsage pinned to my jacket, all other elements of my outfit were second hand, and either charity shop or flea market finds.

Strange as it may sound, no sooner had we entered the park itself than we started walking into the direction of the exit. Not because we'd changed our minds, I'll have you know, we just wanted to explore a part of the park which lies on the other side of the road. 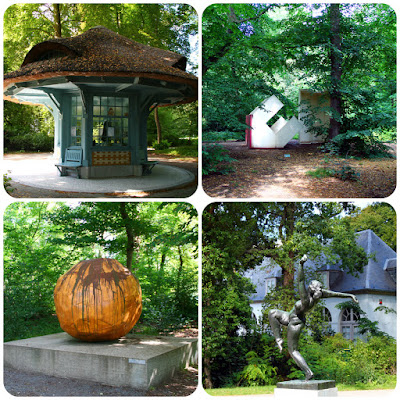 This area is called Middelheim-Laag (or Low) and constitutes the northern part of the park.

Exiting via the main entrance we crossed the leafy lane separating the two halves and entered alongside of the charming little kiosk on the top left, which goes under the romantic name of Aubette.

From there, we followed a winding lane towards and around a glimmering pool, into a part of the park where works of art seem to play tricks with your mind. 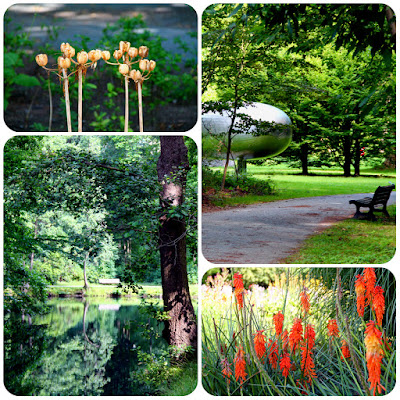 We sat down on a bench near the formal Hortiflora garden, which used to be part of the neighbouring Nachtegalen Park (Nightingale Park) and was incorporated into the Middelheim museum in 2012.

Note to self: bring trowel on your next visit and come at a quiet time to dig up one of the elusive Kniphofias! 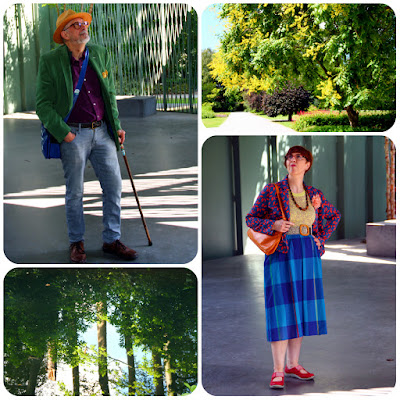 While we were having a breather on that bench, we could hear strange sounds emanating from the open-plan exhibition pavillion to our left.

Closer investigation revealed that this was a work of art called Birdcalls by artist Louise Lawler. In this work, the names of twenty-nine well-known artists have been sounded out into bird calls. Using her own voice, Lawler has transformed each artist’s first and last name into nuanced bird calls, ranging from a shrill squawk to a manic chatter. Very disconcerting, especially when you were standing inside the pavillion. 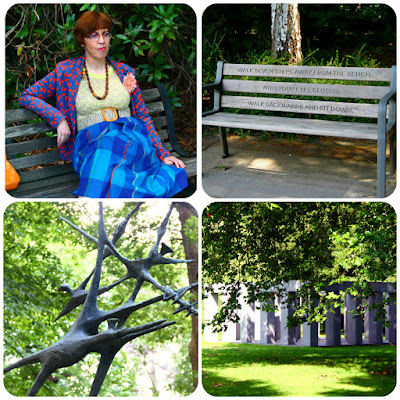 From here, we walked back to the other side of the park which we crossed once again to rejoin our car.

There were several of these benches (top right), each requiring a different number of steps to take. Jos tried one out, and it's certainly not as easy as it looks.

But then again, hardly anything is what it seems these days.