The joys of July

Oh devious July, why do you keep playing these games with us? Worse than April you are, with your fickleness and stale April showers. Are those the only tricks you have up your sleeve, I wonder. I am  craving a string of balmy Summer days, a gentle breeze carrying the scents of gardens in full bloom, and only the lightest of showers, preferably overnight. 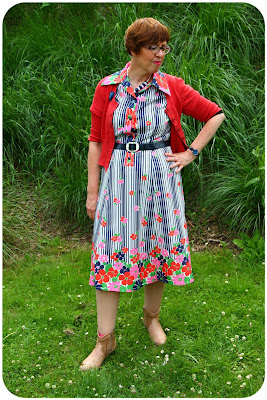 But no, as if we haven't been taunted enough by that horrible pandemic, you are adding insult to injury with your out-of-sync Autumnal weather. Enough is enough!

A sunny morning it was on Tuesday before last, but with enough of a chill to wear a cardi over my short-sleeved dress. Vertically striped in navy on white, the dress has the added bonus of a generous sprinkling of red and pink flowers. These seem to be drifting down towards the hem, where they are joined by navy ones and a layer of green leaves. 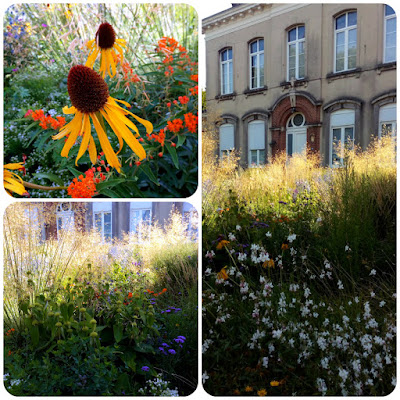 While Jos was doing the twice-weekly food shop, I walked into the village to pick up our ration of free face mask filters at the village hall. At this time of year, the village would normally be a hive of frenetic activity as a result of a fair, but as this was cancelled due to obvious reasons, all was quiet. It was quiet at the village hall too, as it turned out they were closed due to the ... non-existing fair! I wasn't the only one fuming inwardly at finding the doors firmly locked.

But I did get to admire the fabulous front garden of the vicarage. Well, we do not actually have vicars or vicarages here in Belgium, but this is its equivalent, I presume. Whatever the case, that front garden is glorious and whoever designed and planted it definitely earns my approval. 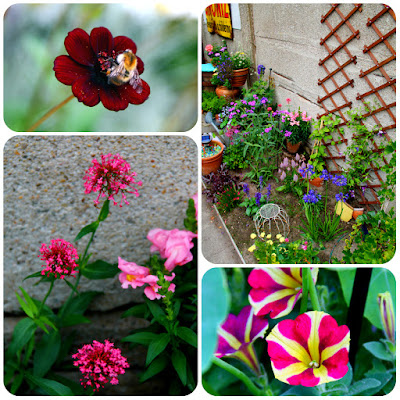 Bees were a-buzzing, both here and in our own little patch where, in spite of being spoiled for choice, they are often making a literal bee-line for one and the same flower, sometimes buzzing angrily at each other. There's more than enough for all of you, so no need to fight, you guys. Easy does it! 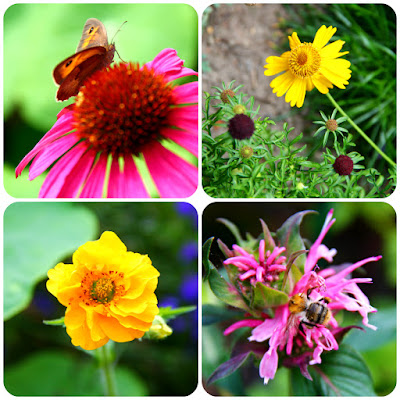 The Echinacea seems to be a magnet for all kinds of butterflies, and there must be quite a few chocoholics among the bevy of bees, as they appear to have taken a particular liking to our Chocolate Cosmos (Cosmos atrosanguineus). Monarda or Bergamot is another firm favourite with the buzzy creatures.

After lunch, I pottered around the garden while Jos was going on his second mission of the day: picking up our new car from the garage. As already hinted a week or two ago, we'd been thinking of buying a new car. Taking advantage of the huge discount offered by the car dealership on their current stock, we took the plunge and traded our faithful Ford Fiesta for a newer model. 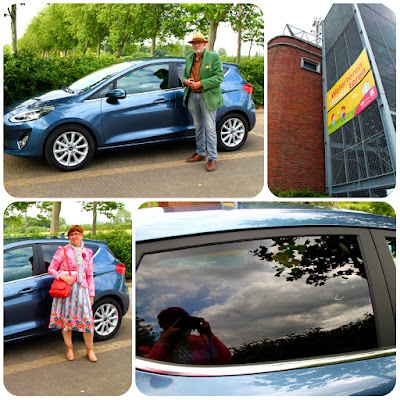 As it looked set to remain dry, we took her for a little drive to the Art Deco water tower in a neighbouring village, the perfect decor for her first state portraits.

There was nobody else around, so we climbed the scary steps inside the steel structure tacked onto the tower, towards the viewing platform on the top. 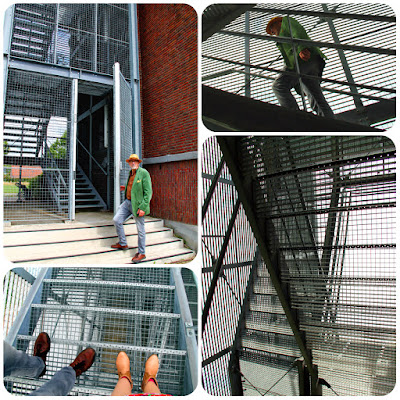 The low, squat building, which is merely ten meters in height, might seem remarkably low for a water tower. However, it was built on the highest point of the area's clay formation, forty meters above sea level, which allowed it to fully function as a water tower. 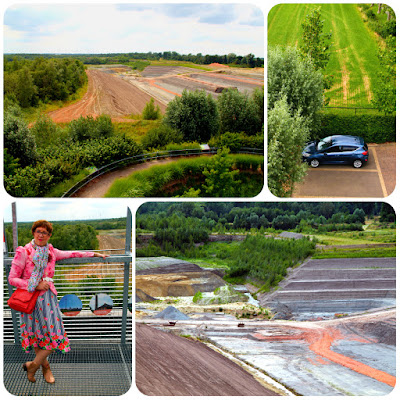 The view is breathtaking, and on a clear day, the top of the Atomium in Brussels, about 30 kilometers away, can be spotted. This day, however, wasn't one of them so, instead, we took in the surrounding landscape. Originally scarred by centuries of clay extraction, it is now slowly but surely being reclaimed by nature.

The still working clay pit immediately below is a lone survivor of the once flourishing brick making industry. 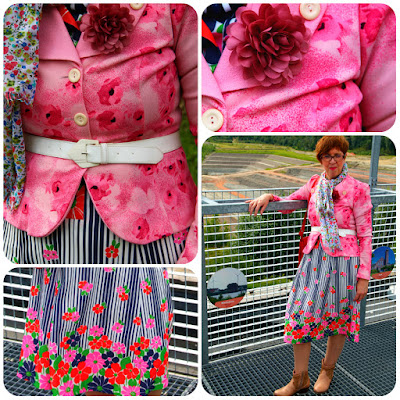 It was a blustery day, the wind chasing away the lurking rain clouds as well as attempting to make off with my lightweight floral scarf.

A vintage pink floral Trevira jacket - a gift from Vix - was added on top of the cardigan, and was accessorized with a white vinyl belt and a dusky pink flower corsage. 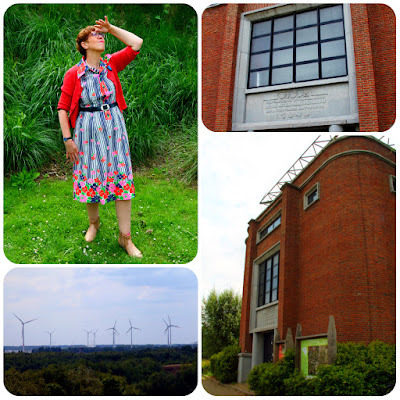 There's a small picnic garden with some benches next to the tower, with steps climbing up to a semi-circular walkway offering a view of the landscape for vertigo sufferers and those not nimble enough to climb all the way up to platform. The garden is flanked by a bank of ornamental grasses which acts as a windbreak, making it perfect for picnics and outfit photos alike. 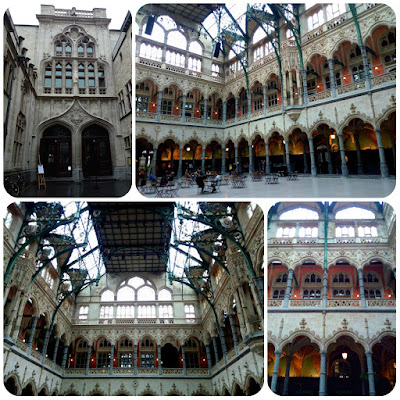 Wednesday was another office day on which heavy showers were rife. These briefly diminished to a drizzle during lunch break, which I took advantage of by paying a short visit to one of Antwerp's hidden architectural gems, which happens to be just a stone's throw from my office.

Having stood empty for 22 years, it has recently reopened after long and intensive renovations.

The main hall of the building has been turned into a covered courtyard where people can enjoy a bite to eat or stop by for a drink. The area can also be used for events. On the first floor the former trading rooms have been converted into facilities for meetings and exhibitions. 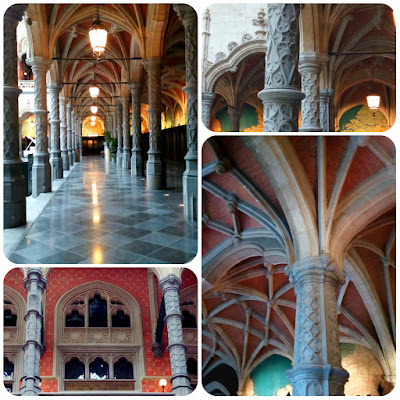 As this was a spur of the moment visit, I was unprepared and only had my phone's camera at my disposal which, frankly speaking, was inadequate to capture the grandeur of the place.

My visit brought back some happy memories, though, as I've been to more than a few gigs and parties here back in the late 70's and early '80s.

I'm planning on paying a return visit with my proper camera. Perhaps by then the first floor galleries, which were now closed to the general public for an exhibition, can be accessed. 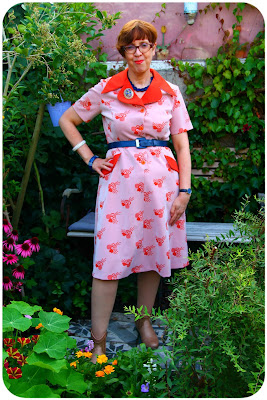 Thursday was another grey and dismal day but thankfully the rain, which had been persistent overnight, had virtually stopped by morning.

The dullness of the day needed to be lifted by a bright frock, my choice of the day being this textured polyester one which has an orange abstract print on a pale peachy background. It is further enhanced by orange buttons as well as a massive collar and fake pocket tabs. 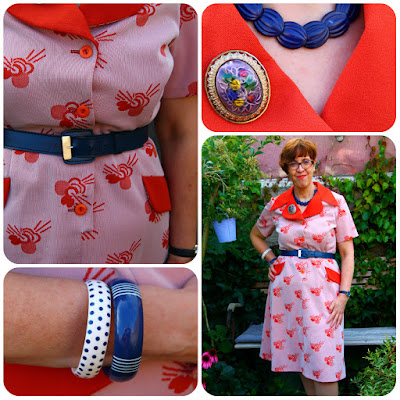 I think it came with a matching belt, but I preferred using a navy leather one from my stash. Further accessories featured navy as well: a necklace of sculpted plastic discs, spotty and stripy bangles and a floral brooch, which has navy, yellow and red flowers on a purple background. 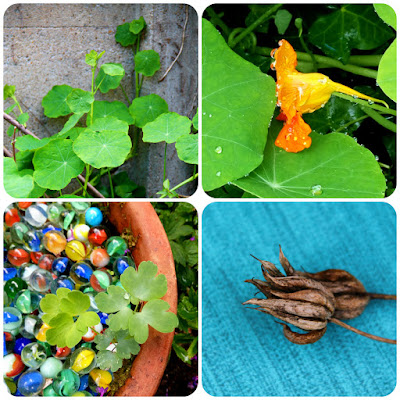 The overnight showers had studded our garden with sparkling raindrops. These were neatly caught by the saucer-like Nasturtium leaves, which have finally decided to do what I sowed them for in the first place, which is climbing the wood pile and wall next to our bench.

A baby Aquilegia had nestled itself in a marble-filled pot. Time to harvest the rest of the seed pods, which I sprinkled around liberally. As if they aren't self-seeding like mad anyway.

After lunch, we pointed our car into the direction of a local open-air plant nursery, in the hope of finding some Kniphofias a.k.a. red hot pokers, as these weren't available at our usual garden centre.

There weren't any here either, and the nursery, which we used to visit on a regular basis many years ago, was an overall disappointment. Still we took pity on a handful of sorry looking perennials which were going cheap. 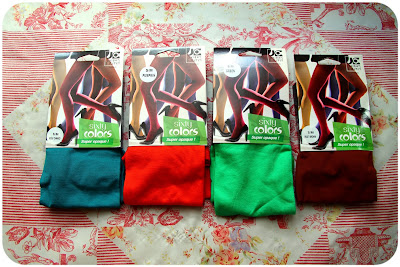 On our way back, we passed a small, out of the way charity shop, which was one of our regular haunts before lockdown. We've never known it to be busy, and this time was no exception, so we stopped for a browse.

I found an unworn vintage Trevira skirt, which will make an appearance in my next post. There was a box full of deadstock opaques in various colours, from which I made a selection. Who knows I might need them sooner than expected if Summer continues to have its wicked ways. 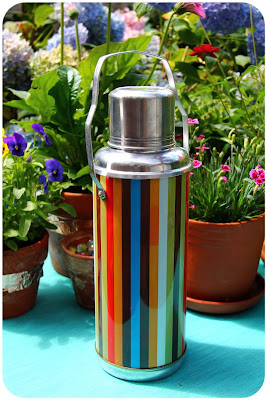 Our final purchase was this cheerfully striped Thermos flask for our collection, which I was able to photograph during a rare sunny moment in the garden.

So, that was it for now. I'll be back with the next episode in a couple of days. In the meantime, I am counting on you all to stay safe, sane and as positive as possible. I'll keep my side of the bargain, and do the same.