Hello there? How are you all doing?

Things are still going pear-shaped around here, as the number of infections continues to rise, and I'm back to limiting my news intake to the bare minimum in a bid to stay relatively sane.

Our sorry excuse for a federal government - a temporary emergency one, as they've been bumbling along trying to form a real one since the last general election over a year ago - has left any additional Covid-19 measurements to be taken into the hands of the local councils. As this largely depends on the severity of the local outbreak, as well as the often doubtful intelligence of those in charge, the result is that, for instance, where we live mask wearing is now required in the main shopping streets only, whereas in the village up the road you have to wear one the minute you step out of your front door.

And while on paper this might make perfect sense, in reality, chaos and confusion rule, creating even more of the latter in my already addled brain.

So, if you ask me how I am doing, I have to be honest and tell you that my head is all over the place and that like many of you I could do with some positive news for a change. 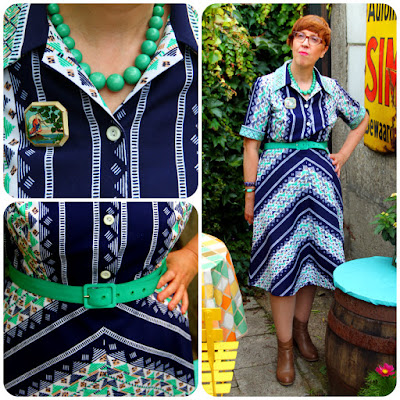 But let's have a look at what I've been up to since my last post!

If everything else seemed to be falling to pieces, the weather did start to look up on Friday before last, even if the sky still insisted on being grey for part of the day.

My choice of outfit was based around this navy, green and white vintage dress. Charity shopped back in March 2018, I love how the skirt is cut on the bias, creating a chevron effect and contrasting with the vertical stripes on the bodice.

I added a green belt which used to belong to another dress, a green beaded necklace and a wooden hexagonal brooch, painted with a pair of cranes contemplating life at the waterside. 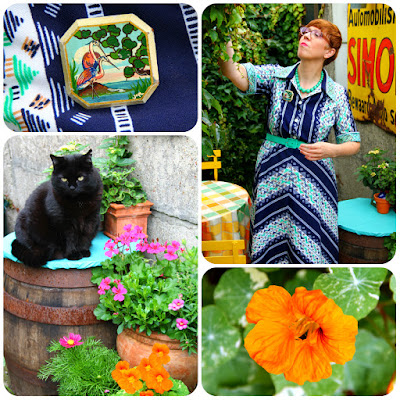 Phoebe was doing the same perched atop the plant barrel, supervising the flora and fauna in our garden.

As Jos's weather app said it might rain, we decided to pay our local charity shop another visit. Situated on the edge of our small town, it was once again a haven of quiet and discipline, and now that mask wearing had become compulsory in shops, it felt even safer than before. 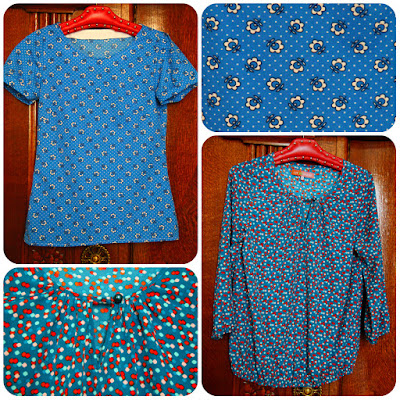 Browsing the clothing aisles, I even found some vintage in the form of the handmade blue floral short-sleeved blouse on the top left. The long-sleeved blouse is from retro label Zoë Loveborn, of which I already have various pieces in my wardrobe. 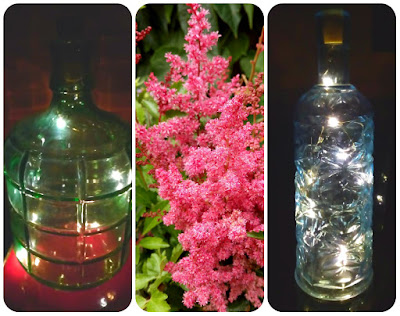 We then continued up the road to a garden centre-cum-decoration discount shop where we wandered through the outdoor plant section and were seduced by a pink Astilbe, intriguingly named 'Drum and Bass'. We also picked up some garden waste bags. The way to the checkout is through the indoor decoration part of the shop, where we found the green and blue bottles above, which have LED lights and were € 1 each. 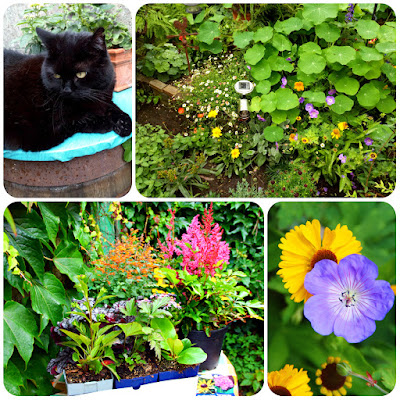 Back at home, we were discussing where to put the Astilbe, when Jos uttered his annoyance about the climbing Nasturtiums I'd sowed back in April. In all honesty, they were completely taking over the border in front of the bench and suffocating some of the other plants in the process. With much pain in my heart, I gave in and removed all but those growing along and up the wall at the other end.

This not only created space for the Astilbe, but also left quite a big gap. So, after lunch, we once again hopped in the car and drove to our usual garden centre, where we bought a variegated Heuchera, a late Summer flowering Anemone hupehensis ‘Hadspen Abundance’ and a Spring flowering Bergenia to keep the Astilbe company in its shady corner.

Noisy neighbours put us off planting them into the garden when we got home, so we decided to leave that for a quieter moment and retreated inside. 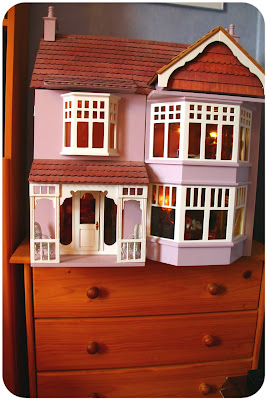 There, decluttering of the spare room continued with thoroughly going through the contents of the above drawer unit. Believe it or not, but this too is hidden away in the same corner previously shared by the carpet sweeper and the View-Masters!

We hadn't looked into those drawers for years, and it turned out to be filled with lots of videos, DVDs and CDs, most of which we'd forgotten we had. We made a selection and filled a big bag for the charity shop with the rest. There was my Dad's video recorder, which we're keeping, and a lot of assorted cables, which were relocated to the basement. 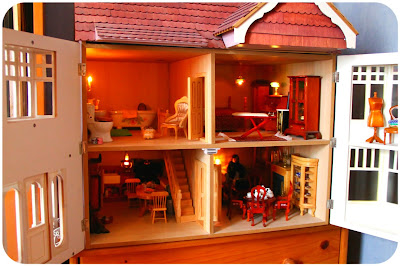 The dolls house on top of the unit was brought back from the UK in 2007. It, as well as its contents which we'd collected over the years, came from various Sue Ryder charity shops.

I'll try to make some detailed photos of each room, which at the moment is difficult to do due to the poor light conditions in its current location. As you can see, it has proper working lights! Also note the ironing board in the bedroom. Not an ironing-shirking Polyester Princess living there, I'm sure! 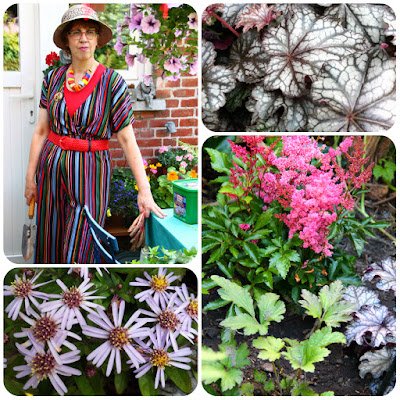 Things were definitely warming up on Saturday, and we finally got to see some sunshine. It was also peacefully quiet outside, so I donned a sun hat, grabbed my trowel and garden gloves and, after clearing the intended area of any weeds and straggling ivy, I planted out our new acquisitions.

There's a close-up of the Heuchera leaves on the top right, while on the bottom left is Kalimeris 'Nana Blue', which I added to the Clematis border.

Here, the lavender Clematis is doing well and flowering profusely, while the first of the flower globes are opening in the Armeria 'Ballerina Red' (top right). The shaggy Monarda flowers (bottom right) continue attracting bees aplenty and, while our Astrantia's flowering is well and truly over, the straw like flowers are definitely keeping their appeal. 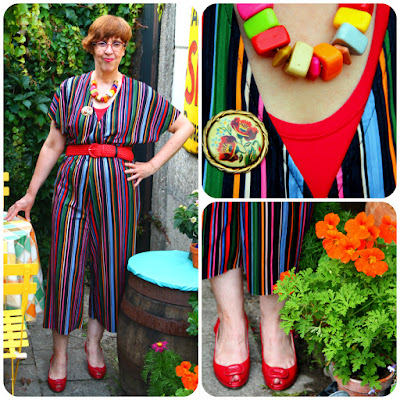 My gardening outfit consisted of a striped jumpsuit, a sales bargain from New Look, under which I layered a red top.  I added a red woven belt, a chunky multi-coloured beaded necklace and a vintage poppy brooch. Gardening done, I exchanged the ankle wellies I was initially wearing for my favourite red Clarks sling-backs. 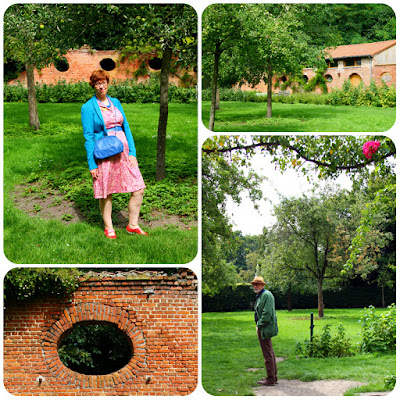 We slept late on Sunday and woke up to a fairly cloudy day in spite of a sunny forecast.

After our fruit and yoghurt breakfast, we tried to find our get-up-and-go and eventually geared ourselves for a walk in park Den Brandt. This leafy park, based around a romantic castle which was renovated in the late classical style in the 1870s, is just around the corner from the famous Middelheim sculpture park. 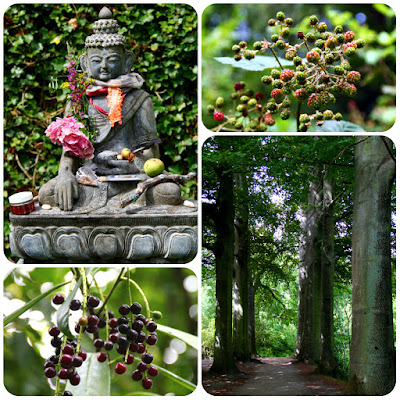 Once we'd parked our car, we were joined by the sun. We entered through the adjacent picking garden, where we marvelled at the offerings made to the Gautam Buddha. He was a gift from the Ambassador of Nepal back in 2004, as a token of friendship between Nepal and Belgium. 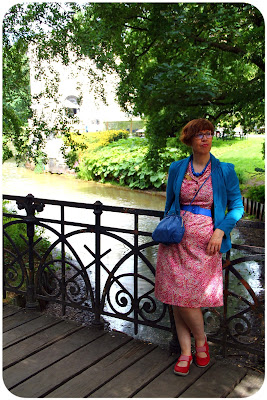 We then skirted the main part of the domain, where people were sunbathing or doing group exercises on the gently undulating lawns.

The beautiful marshy area which we found ourselves walking along was looking enchantingly wild and unkempt, and if it wasn't for the joggers who regularly crossed our path - and expecting us mere walkers to jump out of the way - we could have been in the middle of nowhere rather than at the edge of one of Belgium's largest cities. 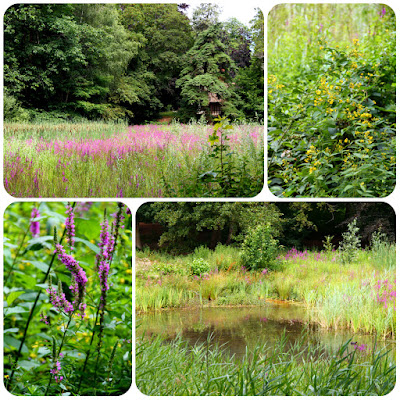 We found peace and quiet on a green lane lined with benches - all of them empty! - where we had the sandwiches we'd brought.

Continuing on our way, we walked to the outer reaches of the park and then walked a path which climbed on top of a series of a series of bunkers, part of a complex built by the Germans in 1943 as headquarters for the Atlantikwall in Belgium. 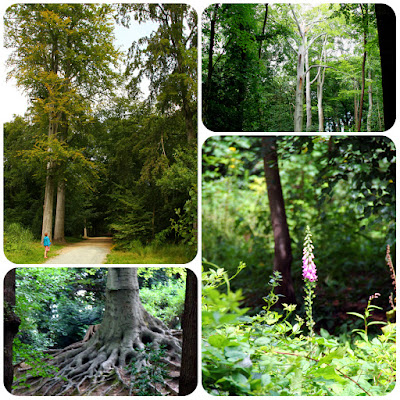 We eventually arrived at the other side of the castle, part of which has been turned into a Grand Café.

Noticing an empty row of tables outside, we made a beeline for the central one, where we ordered cappuccinos from a properly masked waiter.

Apart from that, life seemed to be going its usual way here, and we thoroughly savoured the moment. 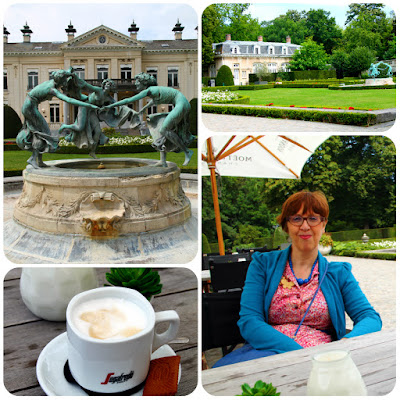 But of course life isn't going its usual way, far from it, and it's people who keep acting as though it is that are making this girl very afraid indeed.

Posted by Polyester Princess at 19:11