Away with the fairies

It was a balmy evening crowning a sun-kissed April day. The kind of blissful, life-affirming Spring day on which buds burst into flower with wild abandon.

It isn't hard to believe in flower fairies on such days and indeed I believe they have found shelter in the nooks and crannies of Dove Cottage's garden. They are dutifully staying at home, of course, and keeping their social distance, being responsible citizens of the world of magic and make believe.

I bet they are busy fashioning face masks out of the papery petals of spent Spring flowers.

The sun was dipping slowly but surely below the horizon, the intensity of her rays now veiled by wisps of clouds propelled along by a gentle breeze. 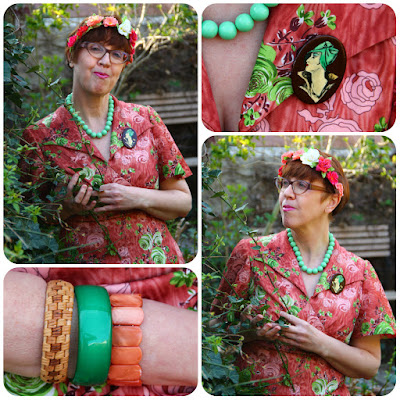 My dress, in a hard to fathom peachy brown colour, was liberally sprinkled with roses in palest pink and fantasy green. A strange combination on paper, it might seem, but quite becoming in real life, helped by the dress's wide V-neck collar and butterfly sleeves.

Accessorized with a pale green necklace and an armful of coordinating bangles and bracelets, I was nevertheless quite jealous of the green turban the lady on my brooch was wearing.

Having nothing of the sort and being hopeless at fashioning one out of one of my green scarves, I opted for a crown of flowers which would turn me into the Queen of the Garden. 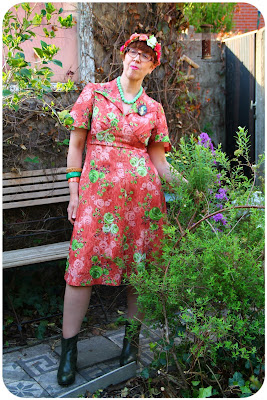 Upon spying me from their hidey-holes, those flower fairies must have been green with envy!

My crown was actually one of the hair bands I bought a couple of years ago to decorate a plain Summer hat. See here!

Phoebe is keeping watch over it all from her Little Mermaid rock. Nothing escapes her attention until she's had quite enough and settles on the bench for one of her naps. The Queen of Napping, she is! 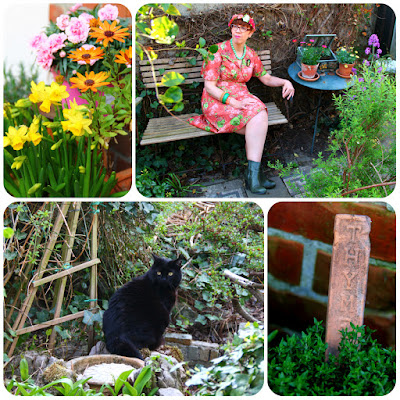 It was the Thursday before last and the start of the four-day weekend in my so-called new normal. As a rule, I am starting these extended weekends full of energy and good intentions, both of which tend to peter out as the days progress. 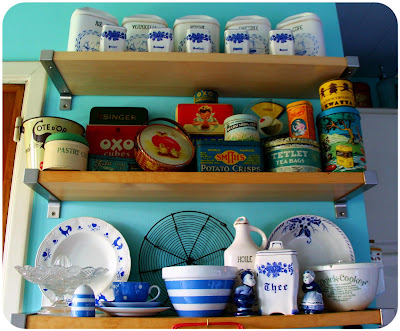 That morning, with the backdoor thrown wide open to let in the fresh Spring air, I continued with the kitchen Spring cleaning, this time tackling the shelves above the vintage cupboard  I cleaned and reorganized earlier this month.

The shelves themselves aren't very much to look at - they're from the Swedish furniture shop - but are stacked full of flea market and charity shop treasures, most of which are purely decorative. 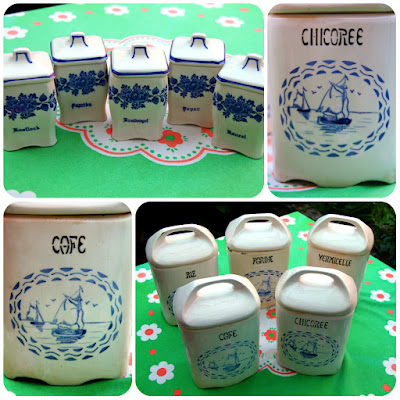 The top shelf is dedicated to two different sets of vintage ceramic canisters, both in a white and blue colour scheme.

The large ones, with their nautical scenes, are part of a set we bought from a consignment store we regularly visited in the early noughties. They mention their contents in French and also include a couple of smaller ones which are displayed elsewhere, and an oil bottle which is living on the bottom shelf.

The smaller set, mentioning their contents in Flemish, were a gift from my friend Inez. By pure coincidence, we already owned a larger tea canister in the same design. This too you can see on the bottom shelf. 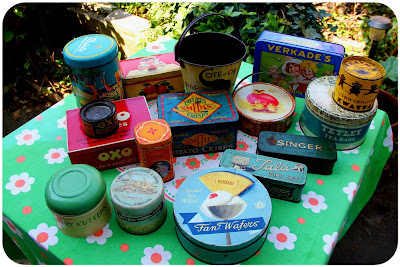 On the middle shelf is the motley crew of tins we've collected over the years. That's to say, those which are in some way kitchen related. There are more in Dove Cottage's other rooms, as you can surely imagine.

I cleared the shelf for cleaning and brought them all outside, giving them a good wipe before more or less returning them to their previous positions. 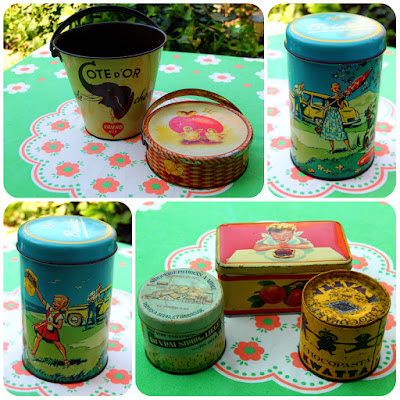 Clockwise from top left are a toy bucket advertising the famous Belgian chocolate brand Côte d'Or and a biscuit tin decorated with an Easter scene, a 1950s Dutch Brinta porridge tin, three tins which used to contain chocolate paste and syrups, and an alternative view of the colourful porridge tin. 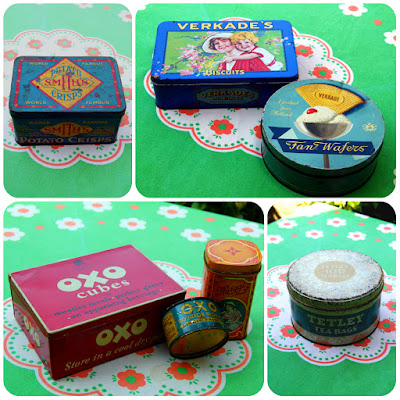 The Smiths crisps tin on the top left was bought from a delightful shop called Utter Clutter in Leominster, Herefordshire while on holiday.  Next to it are two biscuit tins including one for ice cream wafers, from the Dutch Verkade brand. The Tetley tea tin is a family heirloom, in which my Mum used to keep her shop loyalty stamps. Finally, on the bottom left, are various tins which used to contain stock or stock cubes. If I remember correctly, we found the large red OXO tin in a junk shop in Wells, Somerset, during another UK holiday. 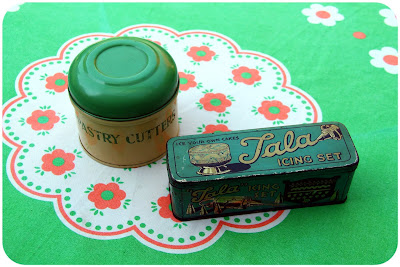 The final tins are the odd ones out, as they are not just ordinary tins! They are both from Tala, which is one of Britain's oldest baking and kitchenware brands, originating from Vix's neck of the woods, the Black Country. Both tins still have their full original contents, being pastry cutters and an icing set respectively. 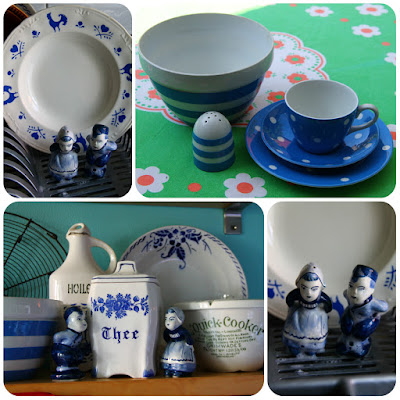 The bottom shelf has a jumble of mostly blue and white things, which has grown organically over the years. The eagle-eyed among you might have already spotted the oil bottle (huile in French) and the thee or tea canister.

On the top right is our very modest collection of T.G. Green pottery, a Cornish Ware bowl and salt shaker and a Blue Domino breakfast set for one, all picked up during our various UK holidays.

The kissing Dutch boy and girl got a good scrub with washing up liquid, but upon putting them back I decided it was best for them to practice some social distancing! 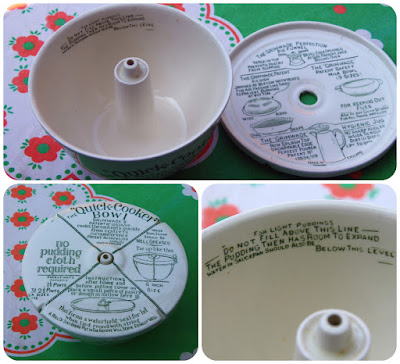 If you are intrigued by the Quick Cooker pudding bowl, here's a bit of history.

Patented by Grimwades in 1911, an internal funnel allows steam to circulate through the middle of the pudding and cook it from the inside as well as the outside. The cover is grooved to hold string so the cover and bowl can be tied closely together. It has green printed pictures and instructions for use on the lid and inside the bowl, while the inside of the lid is covered with advertising for several of their other products.

Having come across this curiosity in the kitchens of stately homes in the UK, it might come as a surprise that we found ours, which probably dates from the 1950s, at a local flea market in May 2018. 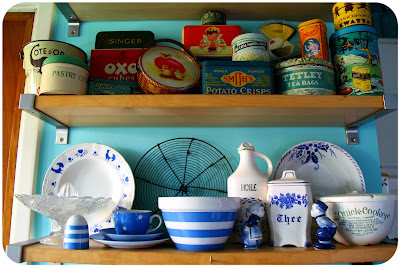 A satisfactory job, all in all, enabling me to look at our accumulated treasures with fresh eyes.

Therefore, I was determined to continue with the job at hand on Friday. Rounding the corner, I dusted the framed ads and coffee grinder hanging on the wall and then proceeded to clean the outside of the huge vintage kitchen cupboard which came with the house. 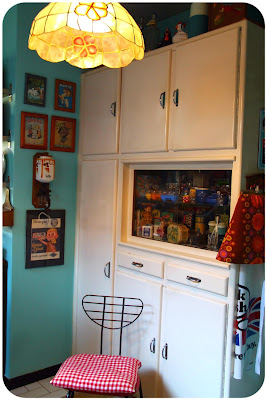 At that point I'd had quite enough of cleaning!

After lunch, we drove down to the supermarket, as Jos hadn't been able to find a couple of things during his weekly shop on Thursday. Jos waited in the car while I dashed around the shop, finding most of the things we needed as well as some self-care products for me.

The rest of the afternoon was spent reading and doing a blog catch up. 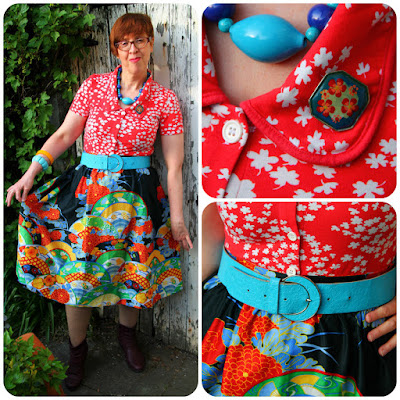 The skirt had been among my last Think Twice sales purchases back in February. As it's quite thin and unlined, it had been put aside for Spring, although I surely couldn't have imagined the circumstances we would be in when it finally got its first wear!

With a multitude of colours to choose from, I opted for a short-sleeved red blouse printed with a scattering of white flowers. From the Belgian Wow To Go label, it was a charity shop find, as were  the turquoise belt and the turquoise and navy beaded necklace.

The brooch was a flea market find, bought from the Brooch Lady back in 2016. 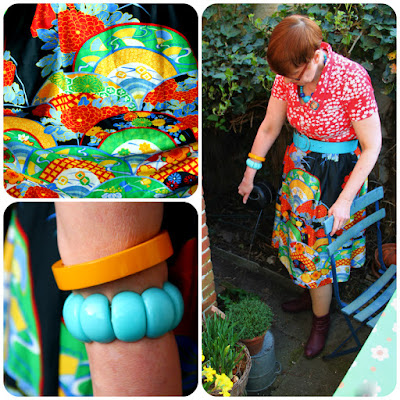 The final days of that weekend proceeded at a much slower pace. But although I didn't do very much at all, I did dress up as usual, and I'm sure I watered the plants!

But that, and more, will be for my next post!

In the meantime, do stay safe and sane, my lovelies!