Down the rabbit hole

Although the date above this post mentions Wednesday, 28 August, its subject is actually what we did more than two weeks ago, on Sunday, 11 August.

Now that I have finished my travelogue, I can finally catch up on what else has been happening in my life and - obviously - what I have been wearing. I have to be quick though, as by the end of this week it'll be September and we'll be off on a another little trip, gathering a fresh batch of stories to tell.

So, without further ado, let's dive in and see what we have been up to that Sunday! 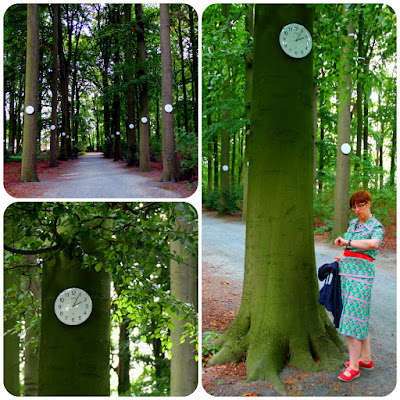 And while I wasn't about to follow the White Rabbit down the rabbit hole into Wonderland, I checked my watch before tiptoeing along this avenue of clock-sporting trees.

This particular installation is called "The sun is moving, the clock ticking, the earth sinking". The message is that nobody can escape time, not even in the woods! 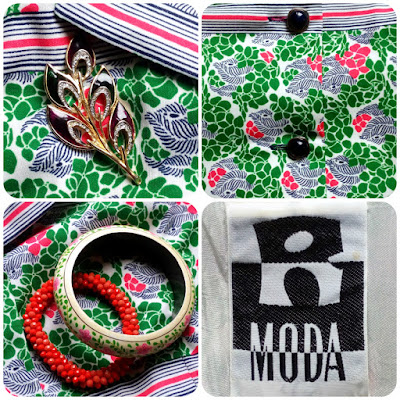 Now that is a subject that has been occupying my mind. I'm forever trying to shake off that cloak of nostalgia which like a birth mark has become part of me.

No matter how hard I keep trying to escape time, it is obvious that I never will. But I can at least look reasonably stylish while I'm doing so.

Here's a closer look at the vintage skirt suit I'm wearing and which has been a wardrobe stalwart ever since I picked it up in a charity shop in 2015. I pinned my peacock brooch from Llangollen to it and wore two bracelets to compliment the suit's colour scheme.

My outfit was completed by a red belt and my red Clarks Cloudsteppers. On my arm, my blue crocheted handbag, whch is actually made of some kind of plastic. I had also brought my flower sprinkled denim jacket, but it turned out to be too warm for it. 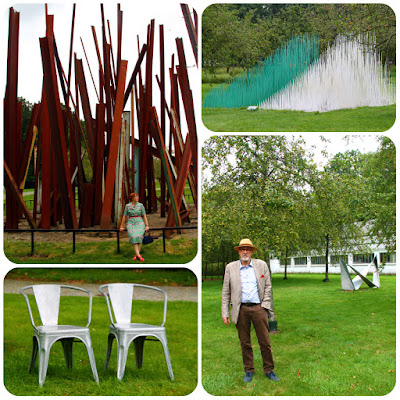 Accidentally, I already divulged our destination for the day, Middelheim, which is an amazing open-air museum of sculpture and art set within a 30-acre park on the outskirts of Antwerp.

Our visit was a last minute decision made in the early afternoon, when it was safe to surmise that the weather gods would be holding off any threat of rain for the day.

Due to the lateness of the hour, there were no nearby parking spaces available, so we had to park our car a bit further away, around the corner. Walking back towards the park, we took the first entrance we came across, which actually took us to the western reaches of the park, where the museum has gathered some of its painted metal sculptures from the 1960s and 1970s. 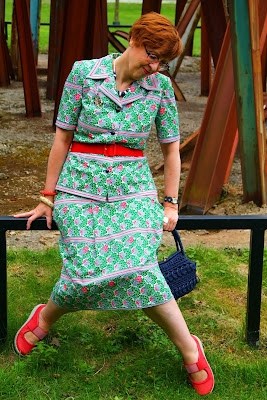 The art installation behind me is a later one, dating from 2009. It is called "Beam Drop Antwerp" and is by US performance artist Chris Burden. You can see it in full in the above collage. Apparently, it was created by pouring liquid concrete into a pit, after which 100 steel beams were dropped into the ground from a height of 45 metres using cranes and the force of gravity. 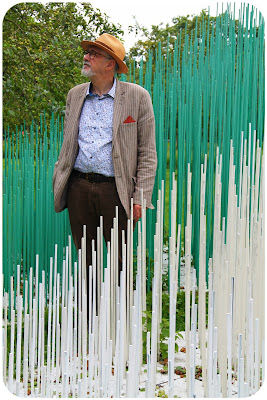 Jos looks quite at home between the two sections of "Double Progression Vert et Blanc". Dating from 1969, its creator is Venezuelan artist Jésus Rafael Soto. 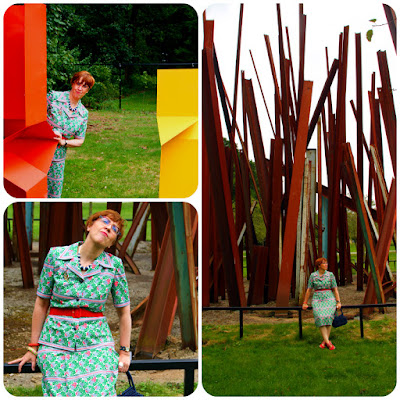 Consisting of eight separate elements in black, green, orange and yellow, this group of sculptures by Jorge Dubon (Mexico), and dating from 1971, is called Bosque Metalica (or Wood of Metal). 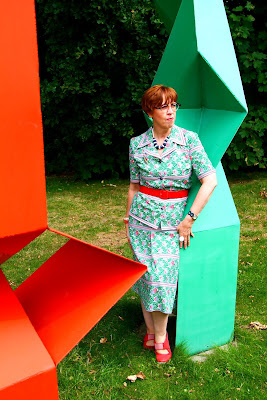 The orange and green elements matched my outfit almost exactly, so that for one moment I became part of this work of art. 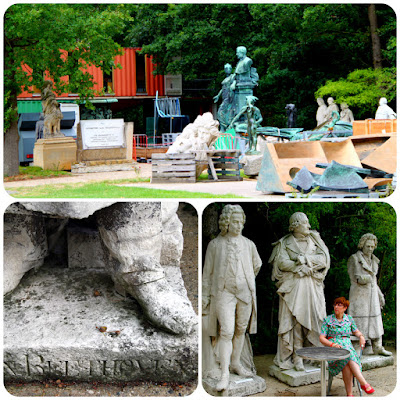 This part of the museum also houses its open-air storage, where some of the sculptures needing restorations or awaiting a new destinatiosn are on display.

Here I drew up a chair for a brief chat with Mozart, Rosetti and Beethoven, who all seemed to have some minor injuries. 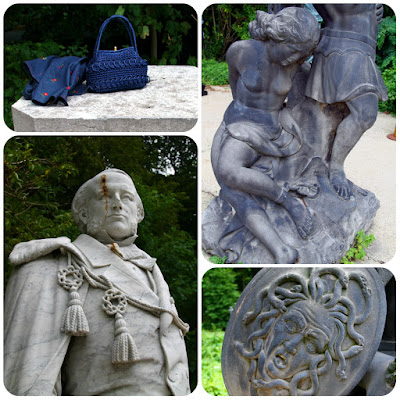 Was it a bird or a bullet which disfigured this important looking figure, whom I'm afraid I forgot to ask for his name? 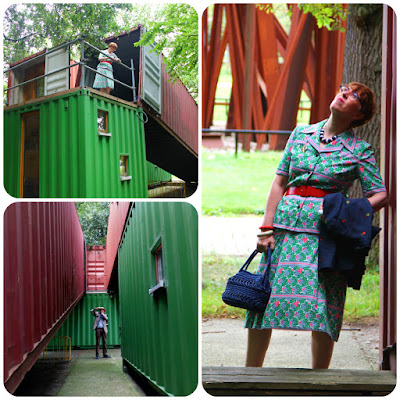 This construction is a mobile container workspace for Compagnie Marius, which has been developing theatre productions since 1991, specializing in outdoor performances. 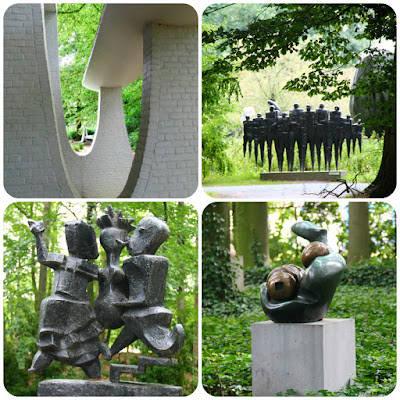 Entering the main part of the park, some of the sculptures seem to blend organically into the landscape.

Here, it felt as if I had really fallen down the rabbit hole, meeting all kinds of mad creatures and the odd enigma.

All was peaceful and quiet, apart from the eternal Pokémon hunters colonizing the park, blind for the beauty of art while singling out their virtual prey.

But then we happened to look back, our hearts skipping a beat upon spying a group of menacing figures advancing upon us through the trees. 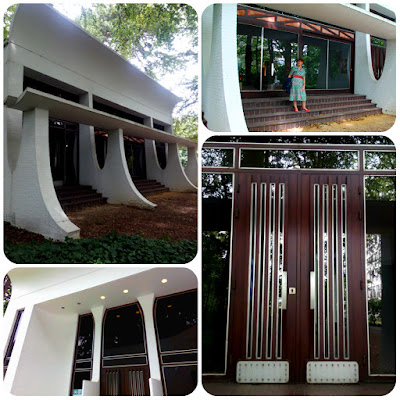 We took flight into the direction of a mirage on the horizon, the dazzling white wonder of the Braem Pavillion.

I have waxed lyrical about this stunning building, in which temporary exhibitions are being held, many times before, so I'm just letting my camera do the talking this time.

Opened in 1971, it was designed by Renaat Braem, one of Belgium’s best-known 20th century architects. 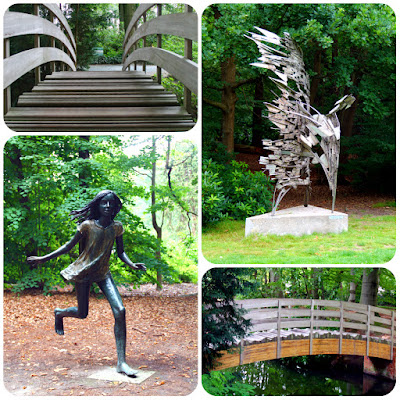 Fleeing into the same direction was this rather bewildered looking Running Girl. She seemed a little out of breath, but then again she has been running on the spot since 1977. Turned into bronze, her creator was Czech sculptor Kurt Gebauer.

I forgot to ask her name as well, but I bet she was called Alice.

Unlike the girl, we managed to escape by crossing The Bridge Without a Name, a work by Chinese artist Ai Weiwei. 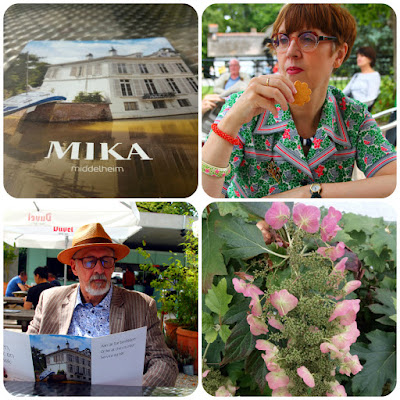 In Alice's words, it was getting curiouser and curiouser, so before continuing our journey, we took a breather on the terrace of the museum café.

Will this biscuit make me grow or shrink, that is the question. Neither, it seemed, as we crossed the road into the second part of the park unscathed and passed in front of Het Huis (The House), a second exhibition pavillion, which was opened in 2012.

The formal Hortiflora garden, which used to be part of the neighbouring Nachtegalen Park (Nightingale Park) was also incorporated into the Middelheim museum in 2012. 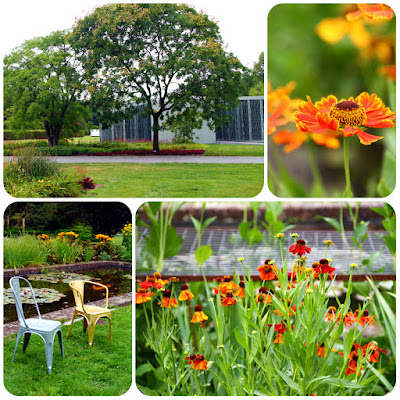 Finally finding an escape route out of the park, we ended up opposite the entrance of yet another park, Den Brandt, with its romantic castle. Although originally built in 1790, it was renovated in the late classical style in the 1870s. 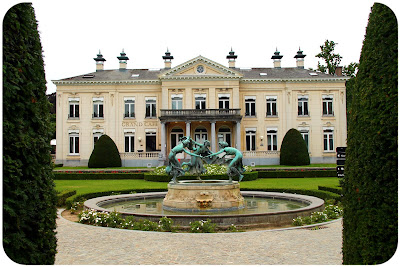 Although we've been here many times before, this must have been the first time we were able to photograph the castle, and the enchanting fountain in front of it, without groups of people milling about or a car parked in front of it.

And with that, our adventure in Wonderland had come to an end.

Posted by Polyester Princess at 19:55