Just another week in August

We've almost reached the end of August by now and September is once again breathing down our necks. For the purpose of this blog, however, I'm taking you back to the first full week of August, which actually seems much longer ago to me than just a matter of weeks.

Summer seemed to have returned but thankfully the mercury kept frolicking around the mid-twenties rather than returning to dazzling heights.

I'm still ploughing my way through my Summer wardrobe, assessing each item with a critical eye in a bid to keep only those garments that give me the greatest pleasure to wear.

For some reason, I hadn't worn this deliciously patterned Terlenka dress in at least two years. In what I can only describe as a moment of madness, I even relegated it to the flea market pile, from which it was promptly retrieved when I was sorting through my stock back in July. 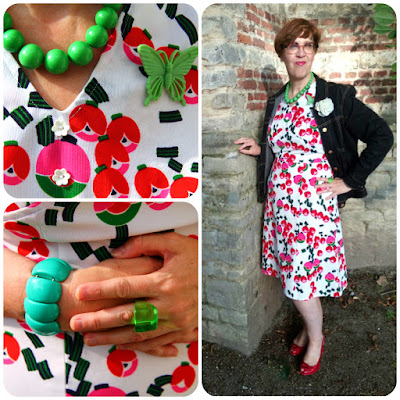 Not the best way to go about decluttering one's wardrobe, I admit, but surely this one was too good to let go of. Plus, I loved wearing it, which is ultimately what matters.

My denim jacket has been doing overtime this Summer, but I've been trying to add some variety by matching the flower corsages I pin on it to my outfits!

I'd planned to exchange the dress's buttons which, although not lacking in cuteness, somewhat disappear against the dress's white backdrop. I'd even selected some likely red candidates from my stash of buttons, but somehow it never happened. 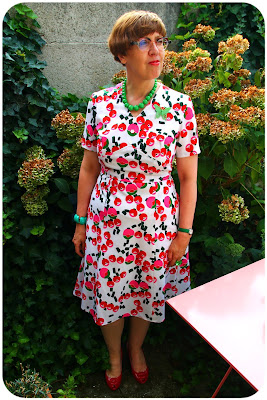 Taking my cue from the green bits in the print, I added a green necklace, butterfly brooch, ring and bracelet.

There's nothing wrong with the above photo, by the way, nor do you have to adjust your screens: the pale pink triangle is part of our garden table! 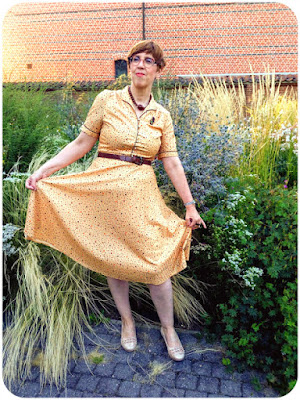 A second wear this Summer for this delightfully swooshy yellow based dress.  Found in a bargain bin for the silly price of € 1 a couple of years ago, it was missing half of its buttons. I don't remember what the original buttons looked like, but I love the pearly ones I replaced them with, which were salvaged from a blouse which had seen better days. 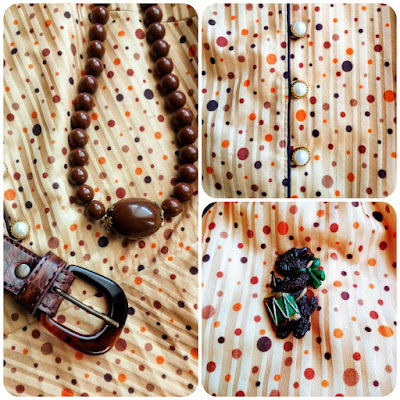 The material has a pleat-like texture to it and is sprinkled with dots in shades of orange and brown.

For contrast, my accessories were all in chocolate hues, including the vintage celluloid brooch with the drum beating Scottie dog. 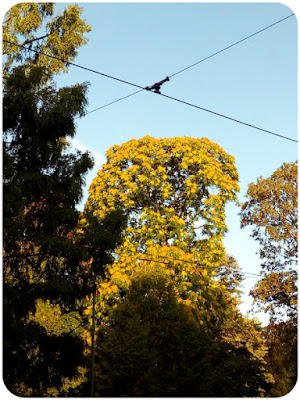 In spite of this being only early August, the mornings already had that slightly hazy late Summer quality to them and, waiting for my tram connection, I couldn't help but notice that one particular tree was already donning some of its Autumn colour. 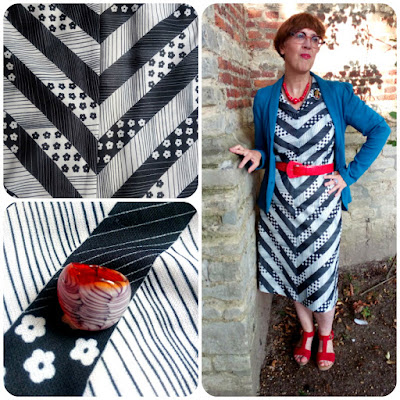 Another dress that has been patiently waiting its turn is this black and white chevron print one.

My phone's camera clearly couldn't cope with its print, which shows up as being purely geometrical, so I added a close up to show you the flowers which are hiding in there!

My accessories, sandals and charity shopped King Louie jacket lift it up with some colour. 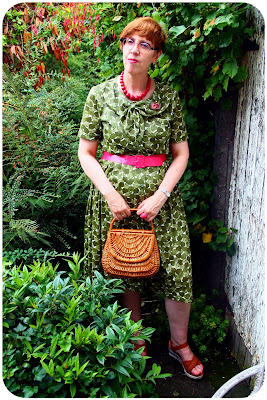 As the working week was drawing to a close, the weather returned to its usual Belgian Summer mix of sunny spells and showers on that week's Friday.

The olive green 1950s style dress I was wearing is a firm favourite, getting several outings each Summer. Its silky fabric makes this fit and flare dress an absolute joy to wear. Plus, it's got pockets! 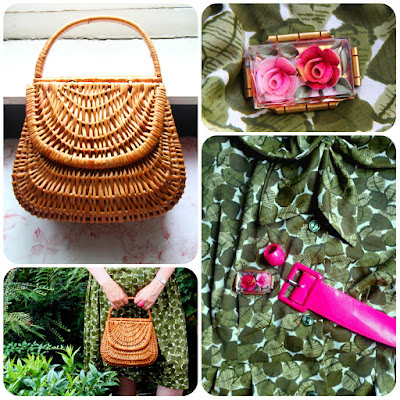 I always gravitate towards pink to accessorize this dream of a frock, and this time was no exception.

The Lucite brooch is from an antique shop in Cardigan. 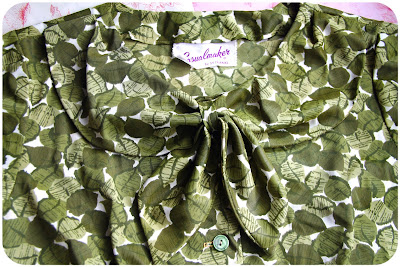 When I posted it on Instagram at the time, I got some lovely comments on its unusal collar, which prompted me to make this close-up. The collar actually consists of two separate flaps which have to be pulled through a loop. 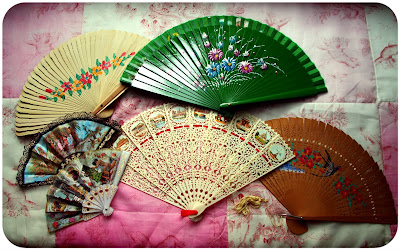 The basket also got much love on Instagram. It was a flea market find back in May 2016 and when it's not in use as a handbag, it holds my small collection of fans.

The weather dropped all pretense of being summery on Saturday which, after some initial sunshine, devoloped into a miserably grey day. The dull sky threatening rain was joined by gusts of stormy wind. 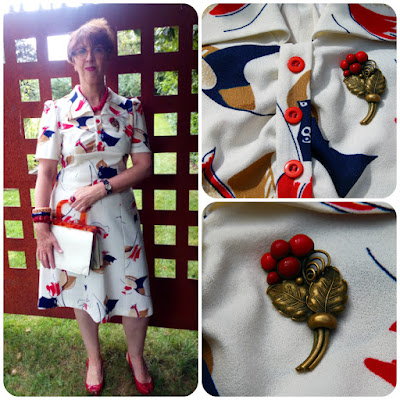 On our way for a browse at the charity shops, we stopped at a pair of fashionably rusty gates halfway down our street. These belong to an organic garden established behind the local history museum, but sadly the garden itself is only open to the general public once a year.

It's the perfect backdrop for some quick outfit photos.

In classic white, red and blue, but with a dash of café au lait, this empire waist dress was one of the very first vintage dresses I ever bought. Although its fabric and label give away its 1970s origin, it is looking deceptively older than its age. 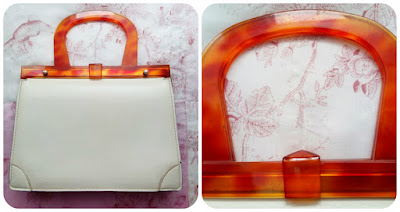 Competing with my dress for the starring role is this cream leather handbag with a Lucite handle. As it is quite delicate, it is one of those handbags that only comes out to play once in a blue moon. 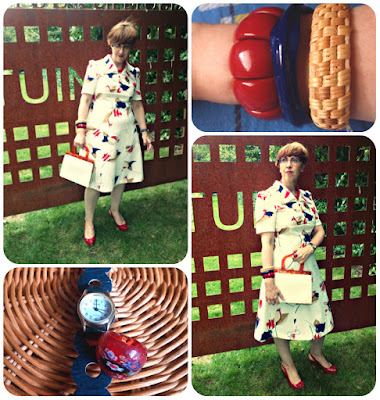 The brooch with its red berries was a flea market find from earlier this year, while my watch's original 1970s strap was part of a lot found in a charity shop several years ago. My necklace, bangles  and ring are all second hand finds too. 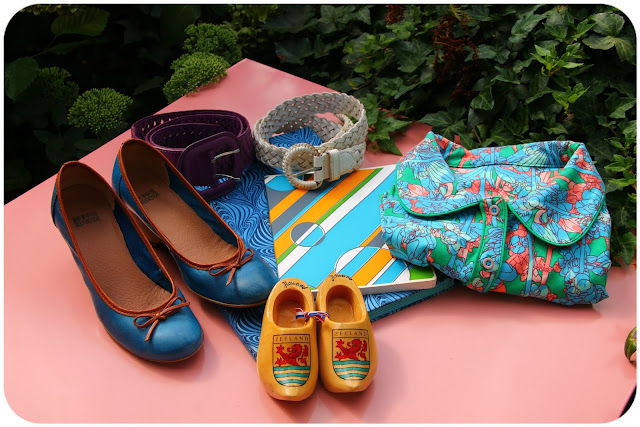 But I did mention a browse in the charity shops, so without further ado, here are my finds: a pair of wedge heeled shoes, two belts, a vintage notebook and folder, a pair of souvenir clogs from Zeeland in Holland for one of our mad collections, and a funky print top from a Belgian fashion label. 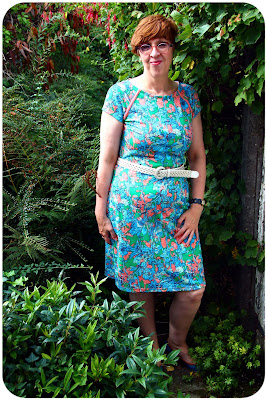 And what are the chances of finding a dress in exactly the same print on the same day, but in a different shop?

It's what Sheila would call a "jammy dress", and I'm actually wearing it as I'm writing this post.

Hope to see you later this week, when I'll be sharing another round-up of outfits.