A handful of Summer outfits

Remember those days when Summers seemed to last forever? School was out and you were feeling giddy at the thought of two months' worth of freedom to be spent doing whatever you wanted.

Looking through rose-tinted glasses, it seems we had more days of proper Summer weather too. Cloudless days segued into balmy evenings, on which we begged to stay up just that little bit longer. Rainy days were few and far between and heatwave temperatures much more bearable. At least that last bit isn't far from the truth, as those crazy +40°C we've just experienced were of record-breaking height in our moderately climed little country. 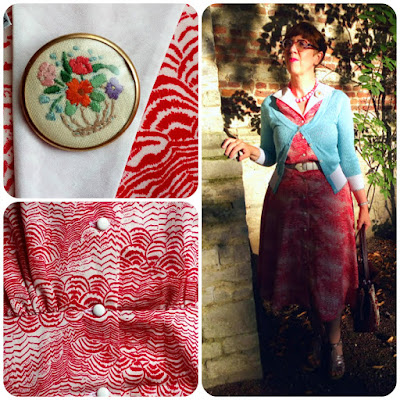 But those days are long gone and nowadays the Summer months just seem to whizz by, leaving a blurry trail of indistinguishable days, most of which I spent working. But, even if nothing very much has been happening, at least in years to come I'll know what I was wearing!

In those post-heatwave days, we were blessed with some gorgeously sunny but not too warm days.

On the Tuesday (oh my, this is two weeks ago already!) I wore one of my all-time favourite dresses. This delicously swishy 1980s does 1950s dress is such a joy to wear. It came with a belt of its own, but I prefer adding an off-white vinyl one, which is another favourite. If the brooch I pinned to it, with its vase full of embroidered flowers, looks familiar, it's one of the three I found in that Shrewsbury antiques centre. The cardigan was a recent charity shop find. 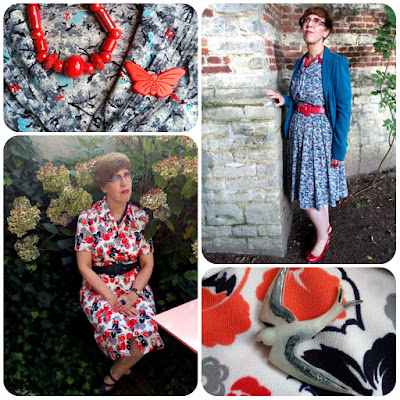 It was a bit of a stressful week, work-wise, as the bosses were visiting from Miami. I'm not sure if you remember, but earlier this year, I traded in my old boss for two new ones! On the plus side, they are the nicest guys ever, but life is always a bit more hectic when my normal office routine is being disrupted.

Another plus is that they love my vintage outfits! These are some more of the outfits I wore that week. On the bottom left, a floral Diolen dress with a plastic swallow brooch pinned to it, and worn with a navy belt. And on the top right, another 1950s style dress with an abstract print and a tie collar. I wore this one with red accessories, including a plastic butterfly brooch. 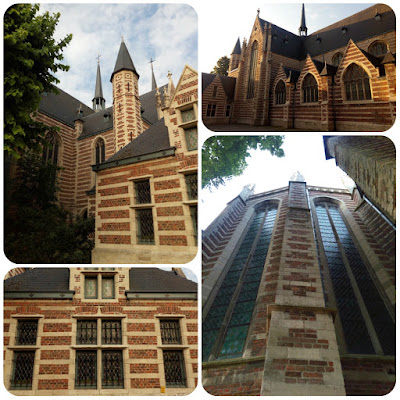 When time and weather allows, we take outfit photos in the morning, with me posing in a picturesque corner of our village church.

The church's origins are 12th century, but only the white sandstone west tower (not pictured) remains from that period. It was extended and renovated in the 16th, 18th and 19th centuries, with the latest adaptations daing from 1928-29.

After leaving me at the bus stop, Jos is going for his morning coffee and croissant. It's all right for some, isn't it? 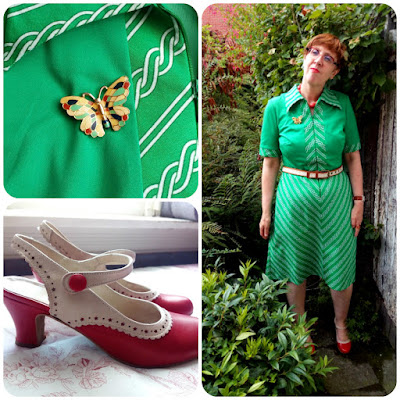 I choose green for Friday's outfit, This was actually my first wearing of this solid green and chevron print frock. Again, I replaced its plain green self-belt with one from my collection in contrasting tan with a cream lacy overlay. The lace theme was repeated in the reddish orange and cream slingbacks. 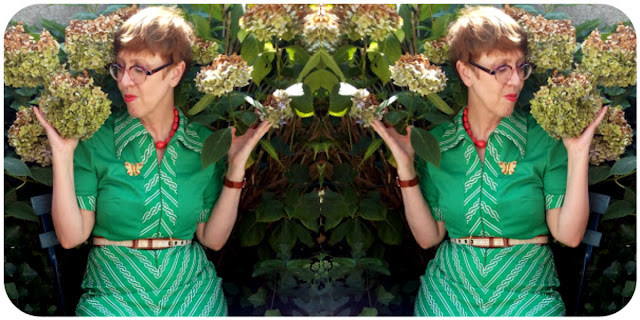 A vintage orange beaded necklace and faux mosaic butterfly brooch were my other accessories.

When I posted half of the above photograph on Instagram, Goody remarked that I looked like a garden goddess!

Speaking of Instagram, I think I am quite done with it. It was fun posting my daily outfits and reconnecting with people who are no longer blogging, but for the last week it has been giving me more trouble than it's worth, as for some reason it keeps preventing me from liking photos and making comments, giving me Action Blocked messages, as supposedly I have been doing things which are not according to their policy. Heaven knows what they are. Anyway, those of you I am following and are following me on Instagram, it's not that I don't like you anymore! 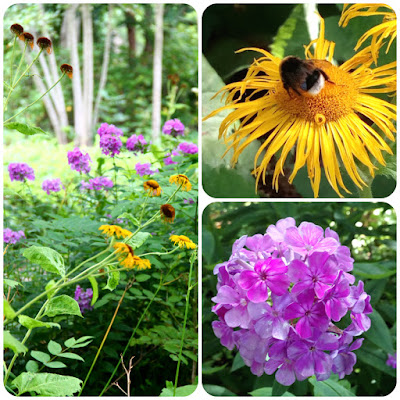 But I digress, so let's proceed with the matter at hand.

After the week I've had, I was more than happy that the weekend had arrived, even if Saturday greeted us with a blanket of grey.

Raring to get out of the house and walk off the Mid-Summer blues, we went for a stroll in the park which has the added bonus of being near one of our favourite charity shops. 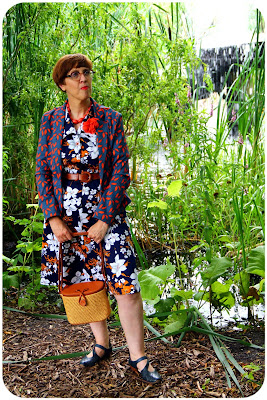 I was wearing the striking midnight blue dress with a heady white and orange flower print, which followed me home from Think Twice in my first week back at work.

On top, the blue blazer with its sprinkling of orange leaves. Charity shopped last year and hardly worn for months on end, it's been making regular appearances these last few weeks. I'm really quite surprised at the number of outfits it seems to work with.

The faux wicker bag was a naughty retail buy from well before #fastfashionseason, and it has been used so many times that I'm no longer feeling guilty about its purchase. The blue flats were a sales bargain from two Summers ago, and almost rival my Cloudsteppers in comfort. 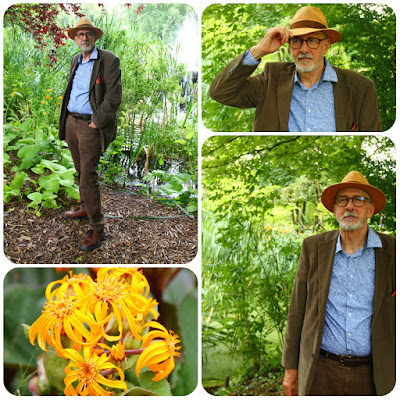 We've reversed roles here, and it seems I'm married to a natural model! The muted browns of Jos's trousers and jacket contrast beautifully with his blue floral shirt. Both the jacket and shirt were charity shop finds. And so was the belt, which he picked up in Shrewsbury! 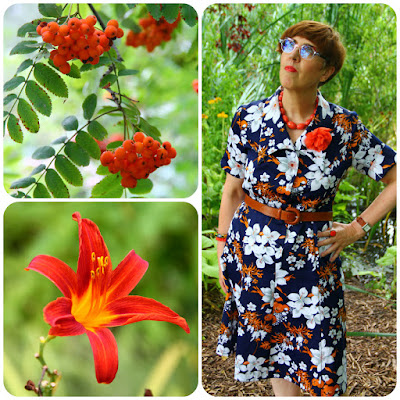 Here's a closer look at the exotic print of my dress. I added an additional orange flower for further oomph, a tan belt at my waist and the same orange beaded necklace I wore on Friday. 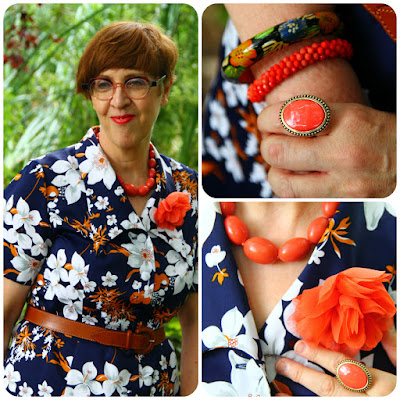 The orange enamel of the ring had a little chip, which I repaired by painting it all over with orange nail polish in a slightly different shade.

I'm making a concentrated effort to wear more bangles and bracelets. During the week, this usually falls by the wayside, as when I do wear them, they have to be removed when I'm at my desk as they hinder my typing.

But as I have more than a box full of them, not wearing them is a bit of a shame, don't you think? 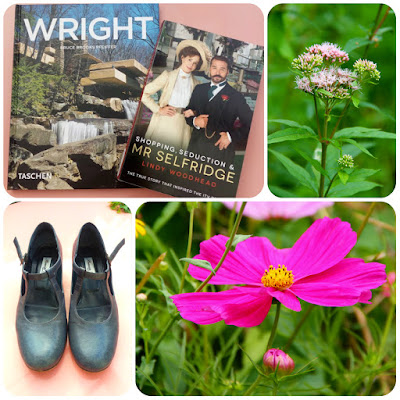 From the park, we ambled towards the charity shop, where pickings were slim but still included some books and a pair of Italian made shoes. And some bracelets, but you'll get to see those later.

On Sunday, the sun was out in full force again, presenting us with a glorious Summer's day.

It was the first Sunday of August, the day a huge flea market is being held in a nearby village. It used to be a highlight of our Summer season for many years until two years ago, when we were more than just a little disappointed with the quality of the stalls.

After giving it a miss last year, we were now prepared to give it another go. 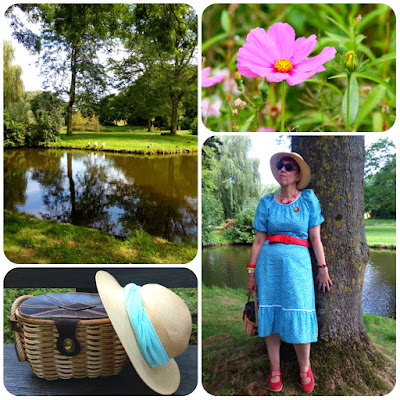 Sadly, it was another disappointment but although this became clear soon enough we stubbornly persevered, passing stall after stall selling cast-off clothing, toys and general tat under the glaring midday sun.

I was glad I was wearing a hat but forgot to bring a scarf to protect my neck, so that I was forced to buy a reasonable looking one for € 0,50. 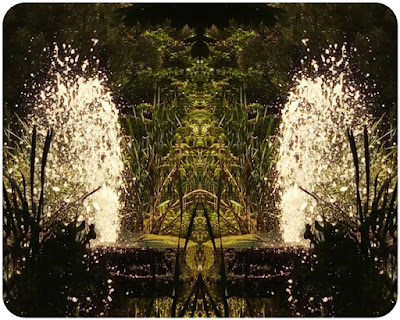 As the market wasn't too far from Saturday's park, we decided to return and sit on a bench under some trees, while listening to the gurgling of the stone fountain, which added some additional coolness.

Playing around with its mirror image, it seems there's a mythical figure hiding in the green! 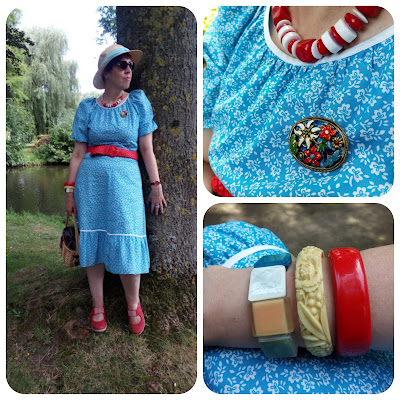 I was wearing a gloriously cool 1970s cotton Summer frock. When we left the house that morning, one of our opposite neighbours remarked that I looked very "English".

My accessories that day included a red belt, red and white beaded necklace, vintage metal flower brooch and a stack of bangles. Both the bracelet with its different coloured squares and the ivory coloured carved one were the ones I charity shopped on Saturday 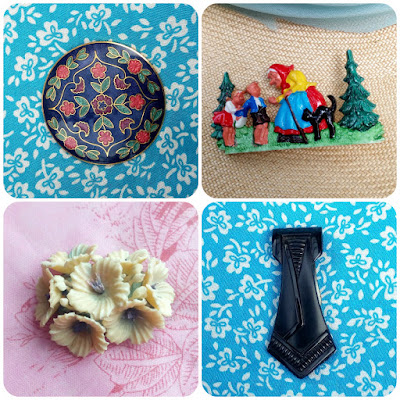 For the longest time, my only find - apart from the scarf - was the vintage plastic brooch depicting Hansel and Gretel. And Phoebe!

Then, as we were nearly at the end of the market, I found two more brooches (top and bottom left) and a Bakelite, Art-Deco style tie pin! 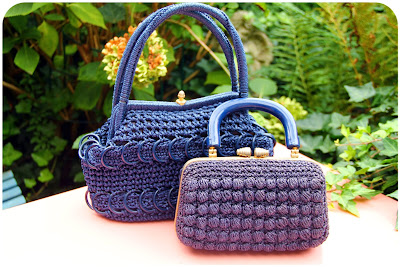 Finally, there was this little vintage crochet handbag. I've used the other handbag, which has been in my collection for a couple of years, for sizing purposes. This one is regular handbag size, so that you can see how tiny the new one is. Too tiny to carry much in it, but surely too cute to be left behind?

Posted by Polyester Princess at 20:12