In between packing our bags for our week away from it all - mopping our brows as this is sweaty business when it's nearly 30° Celsius - I'm squeezing in one more post to wrap up what's left of the month of August.

The last couple of weeks have been a bit of an emotional roller coaster for me, so roll on next week, as I desperately need to recharge my batteries.

Roll on September too, as this is by far my favourite month of all. If she deigns to bless us with some Indian Summer days, they are so much more bearable than those in July and August, as it cools down considerably overnight. And I just love the sights, sounds and smells of impending Autumn! 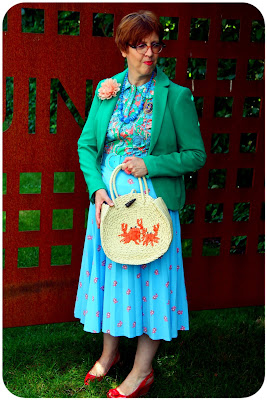 But let's not get ahead of ourselves, as there's still the rest of August to talk about.

We had a special treat in the week following our adventures in Wonderland, as the 15th of August, which fell on a Thursday this year, is a holiday in Belgium. We'd set our hearts on going for another walk, so wasn't it just our luck that the weather was damp and miserable? We just moped around the house feeling sorry for ourselves, until a brief break in the clouds finally drove us outside, making a dash for it between showers. 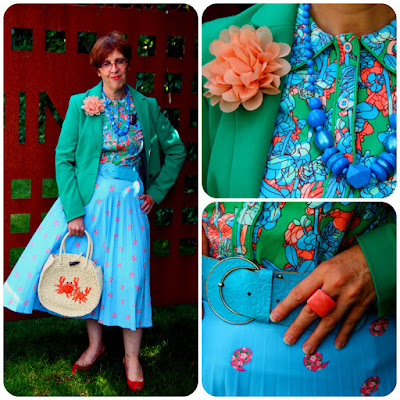 All dressed up and nowhere to go! We just went for a limb-stretching walk around the block, stopping at the rusty gates for some outfit photos.

I might have come straight from the eighties in this outfit, although it was by no means intentional. I was intent on wearing the funky print blouse I'd picked up at the charity shop the week before, and was struggling to find a skirt to wear with it when my eye was caught by this sky blue pleated skirt dotted with pink and green Paisley motifs. It was hanging with a handful of others at the side of my wardrobe as a reminder that I should wear them.

And I hadn't worn this one before, ever. The skirt was picked up at Think Twice for a mere € 1 a couple of months ago and yes, this was its first outing.

As the outfit was based around the blouse, I used all its colours for the rest of my attire. I added different shades of blue for my belt and necklace, green for my jacket and peachy pink for my ring and flower corsage. 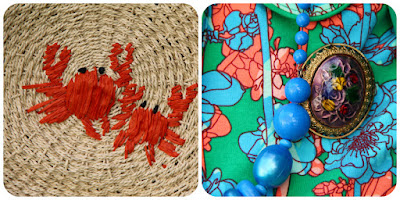 On the right, you can see a close-up of my brooch. Apart from the blouse's blue and green, it is totally off-colour scheme with its purple background and yellow and red flowers.

Yes, yes, but what about that divine basket, I can hear you think. Well, it was a lucky find in a charity shop in Antwerp during one lunch break. I'm a sucker for a wicker basket as well as a seaside theme, and I swear to you, those two crabs were waving at me from afar. It was slightly out of shape and one of the edges needed restitching, but otherwise it was in perfect condition. And cute, obviously. 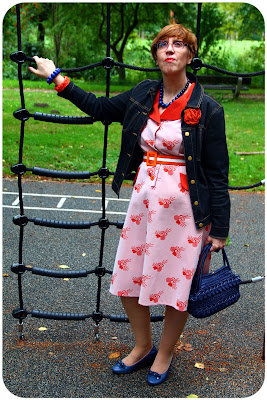 I had to be back at the office on Friday and - yes, you've guessed it - it was a sunny day! Argh!

Oh, never mind, there's always the weekend, we thought. But we must have been in the weather gods' bad books as yet again sullen skies and rain reigned on both days.

At least it stopped raining for long enough on Saturday for a stroll in the park en route to our favourite charity shop. There was even some watery sunshine to accompany us. 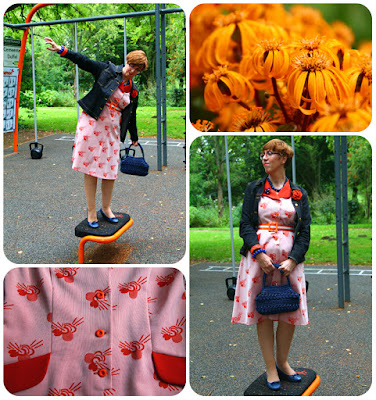 At first, not wanting to ruin my shoes by walking on the wet grass and muddy paths, we made some outfit photos at the newly installed fit-o-meter at the edge of the park.

Orange is such a pick-me-up on a dull day, isn't it? I love this polyester dress, with its orange abstract print on a pale peachy background, and solid orange buttons, collar and pocket tabs. Fake pockets, alas! 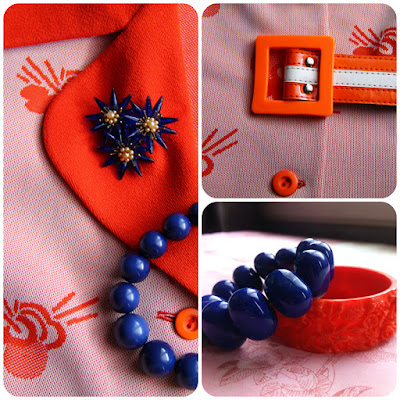 My brooch of choice is a delicate vintage one I bought from the Brooch Lady, and it doesn't often see the light of day. I'm forever worrying that one of the blue petals - which are some kind of elongated blue pearly beads - will break off, which would leave me heartbroken. But isn't it just perfect on the orange collar?

A white and orange striped vinyl belt with square buckle, bangles in blue and orange, as well as my famous blue handbag and faithful denim jacket completed my outfit. 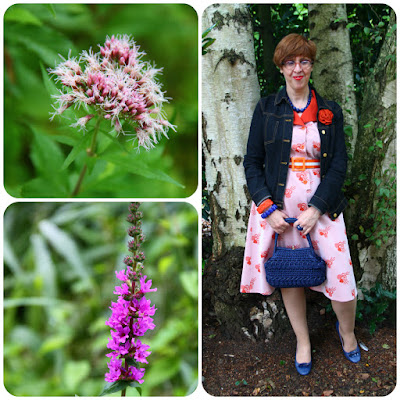 If we didn't have much luck weather-wise, I'm pleased to say that the charity shop came up trumps and delivered some delectable goodies. 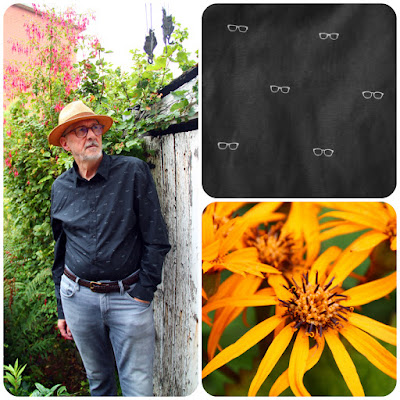 I found Jos a brand new H&M shirt, in black with a print of tiny white spectacles. Isn't it sweet? 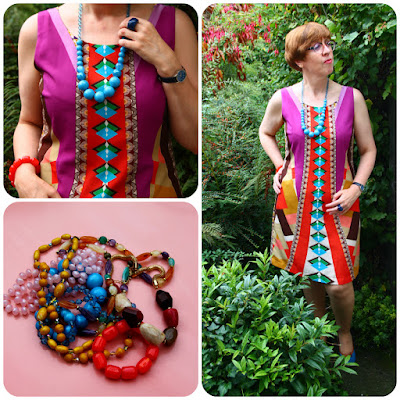 This psychedelic sleeveless shift dress caught my eye and I was delighted that it was my size too.
It's by Caroline Biss, an upmarket Belgian fashion label, and would have retailed at around € 200. I'd never be willing to spend that much on one dress, but at € 5: yes please!

There was a jewellery sale too, and I admit I went a bit overboard. 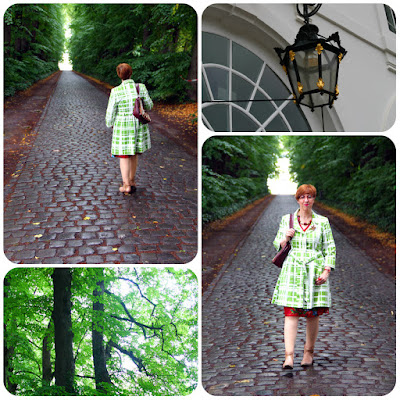 Not much luck on Sunday either. It had been raining all morning, but we had to run an errand in a neighbouring village so that in spite of the dismal weather, we had to leave Dove Cottage's cozy confines. 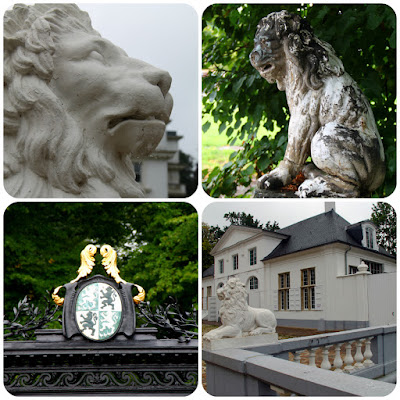 Our errand completed, we found that the rain had momentarily stopped, so we headed down the road towards Hof ter Linden, a park established on the domain surrounding a Neoclassical manor house. 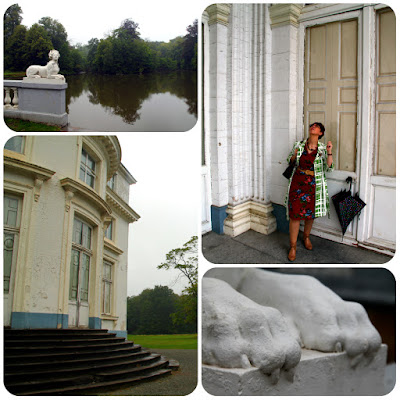 The crumbling house and its stable courtyard lie at the end of an enchanting linden avenue.

Restorations are still ongoing but one of the coach houses flanking the courtyard has now been turned into a brasserie, where we stopped for our customary cappuccinos. 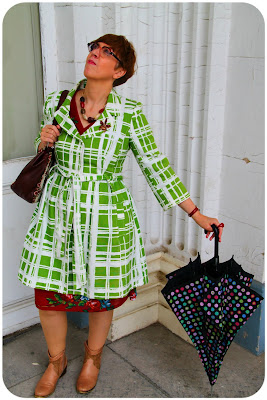 It started drizzling again soon after we continued our walk, but I'd come prepared as I was wearing the groovy raincoat I'd scored in a charity shop in Church Stretton while on holiday in Shropshire in June. We were also carrying our big spotty umbrella which Jos tells me was purchased during a long ago UK holiday.

Nevertheless, we were glad of the house's portico, so that we could shelter from the rain and take some outfit photos. 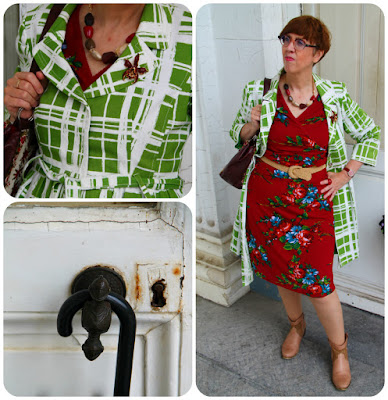 Underneath the raincoat, I was wearing a long-sleeved charity shopped King Louie frock in burgundy with a pink, blue and green blowsy flower print.

I added a hessian belt and one of the necklaces from Saturday's haul.

No sandals and bare legs that day: I was wearing nylons and my wonderful emergency booties, bought back in Spring when faced with a wardrobe malfunction while at work. They have certainly earned their keep by now and I even bought a second pair to avoid heartbreak when they eventually wear out.

Up close, the house's sorry state is all too apparent. I've read that restoration plans for the house are finally being finalized, but at the time of our visit, it had a definite air of desolation, which wasn't helped by the rain, which had by now increased in intensity. 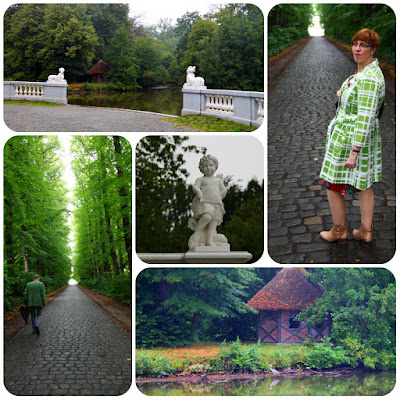 There was nothing for it but to return the way we'd come, leaving the haughty sphinxes to guard the domain.

In the two weeks that followed, Summer returned once more and we even had another heatwave to contend with.

But for now, we have come to the end of this post, so I'll have to show you the rest of my August outfits some other time.

Can't wait to start another series of adventures tomorrow. See you in a week's time!

Linking to Nancy's Fancy Friday - better late than never, as they say!