All quiet on the Western front

If only I could stop the hands of the clock, I mused, even if just for a little while.

The early September sunshine warming my face, I was standing on the steps of Poperinge's town hall, savouring the delicious feeling of having a whole week's holiday stretched out in front of me. 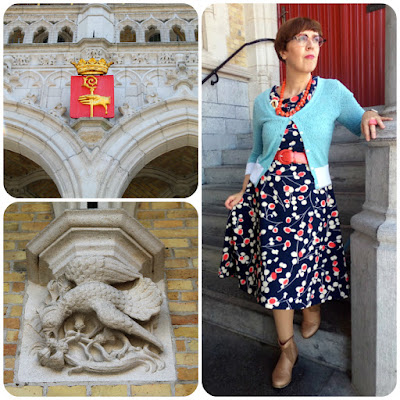 It was Monday, 2 September, and we'd arrived in Poperinge, a sleepy little backwater in Belgium's west country, in the early afternoon.

Too early for our 3 pm check-in into our cottage at the edge of town, we walked towards the town centre to reacquaint ourselves with the place which has been our base for touring the area since 2012. 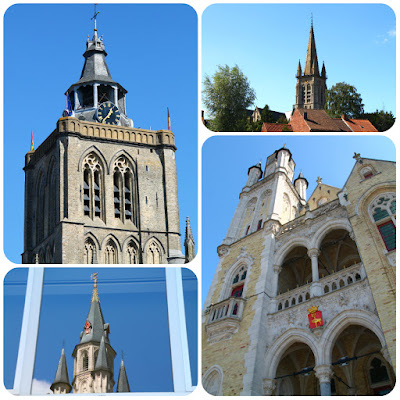 Taking pride of place on the Grote Markt (market square) is its town hall. Built in neo-Gothic style as recently as 1911, it looks considerably older than its years. Proud of its buttery bricks, its decorative arches and stone carvings, not to mention its gleaming gold weathervane, it was preening itself in the shop windows opposite.

Its tower, together with those of the town's ancient churches, the 15th Century St. Bertinus Church (top left) and the 13th Century Church of Our Lady (top right), dominates the town's skyline, which can be seen from far and wide. 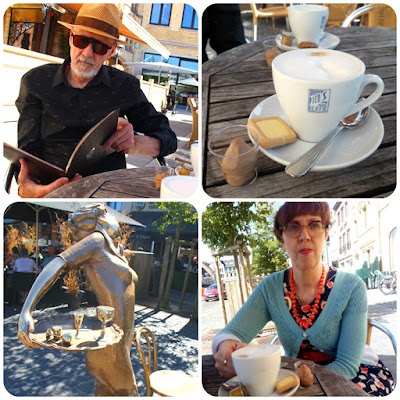 Making the most of the, according to the weathermen, short-lived sunshine, we enjoyed a cup of coffee while sitting on the terrace of one of the market square's cafés.

The gold sculpture of the girl with her serving tray belongs to another café on the square, La Poupée.

She isn't just there to attract customers, but commemorates Eliane Cossey, an attractive red-haired girl who worked at her father's café during the First World War, and was given the nickname of Ginger. Such was her fame that officers of all nationalities came from miles around to see this stunning continental beauty and her father's establishment soon became known as Ginger's instead of its French name La Poupée. 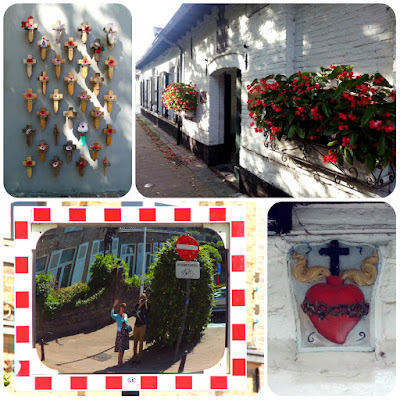 Although during the Great War, Poperinge was part of unoccupied Belgium, poignant reminders of its devastation are all around. This wall full of poppy-adorned wooden crosses (top left) can be found in the town hall's courtyard, next to the authentic execution pole. This a painful reminder of the fate which awaited many so-called ‘deserters’ during the Great War. Most of these frightened men were suffering from shell shock but, instead of receiving compassion and understanding, a terrifying example was made of them.

Our town walk then took us to a picturesque walled courtyard lined with little white-washed cottages. These were built in the late 18th Century as some kind of almshouses for poor widows. The flaming heart and cross above the entrance refers to the responsible charitable organization. 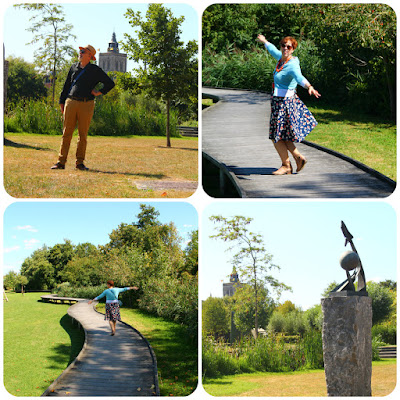 As always on the first day of our September holiday, we ended up at the local park, and the town's green lung, which was established in 2002, and named after one of Poperinge's most famous sons, Dirk Frimout who, in 1992, was the first Belgian in space. 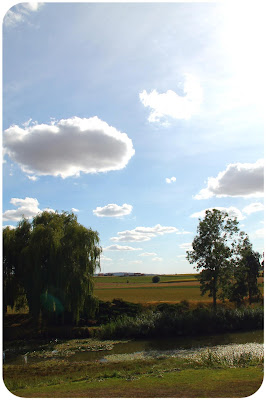 By then, it was past 3 pm, so we beat a hasty retreat to our car and, after stocking up on provisions at the local supermarket, drove down to the little cottage which would be our home for the next six days.

A little studio apartment above the owner's carport, it has everything you can possibly need, but our favourite feature is the magnificent view over the lake, which is part of the owner's domain, and towards the hills on the Flemish-French border in the distance. 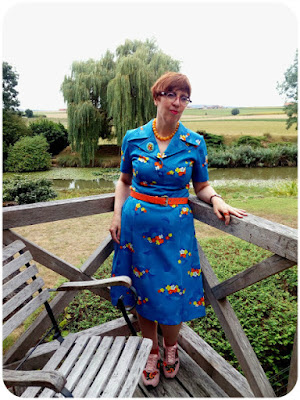 We know from past experience that, as long as the weather's dry, this is the perfect backdrop for daily outfit photos so, starting as we meant to go on, here is what I wore on Tuesday.

This sky blue Diolen dress sprinkled with clusters of orange, yellow and white flowers has a twin sister in mustard, which I actually wore during last year's September holiday (see here).

I accessorized it with an orange belt and a yellow beaded necklace. As we had some serious uphill walking in mind, my footwear of choice were the pink floral sneakers I charity shopped in Shrewsbury back in June.

As you might have noticed, Monday's blue skies had disappeared, making way for a blanket of dull grey and, even though it was still in the low twenties, this put a bit of a damper on things. Especially when we were treated to some light drizzle upon reaching our destination. 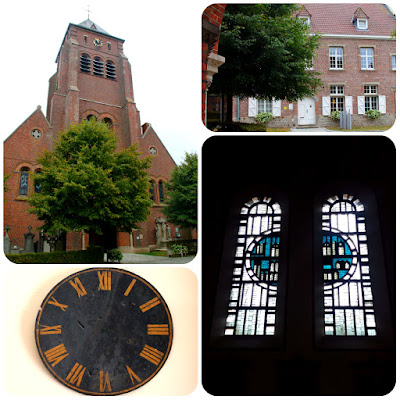 We were headed to Kemmel, a picturesque village in the hilly country south of Poperinge.

We'd planned to do the walk we would do today on the final day of last year's holiday, when unfortunately we found our plans thwarted by a cycling event which would have been a great hindrance. Not having a death wish, our plans were aborted and we did something else instead that day.

This time, we weren't to be deterred! Nipping inside the tourist office for a map of the area, we were tempted by a sign pointing into the direction of the church opposite, where an exhibition of all things sweet was being held.

So, after a visit to the church itself, where we admired the modern stained glass and were enamoured by a clock without hands which we agreed would be perfect for our time-stopping plans, we made our way to the exhibition, where I demonstrated my ice-cream scooping skills. 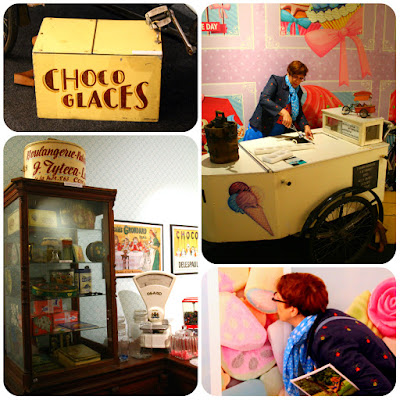 Seeing all those sweets, cakes and biscuits had made us hungry, so we went in search of lunch, after which we were ready to start our intented walk.

This would skirt and climb the hill Kemmelberg. Berg is the Dutch word for mountain and, at 156 meters, the Kemmelberg is the highest in flat Flanders! Those of you living in countries with real mountains, please refrain from laughing! 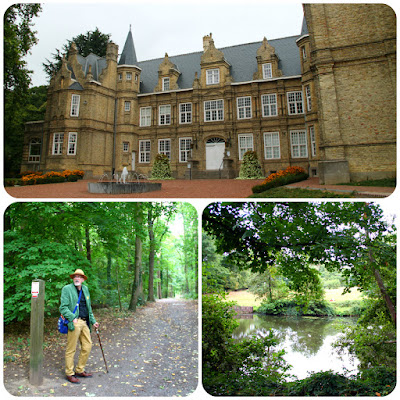 The start of our walk was in the local park, where the former castle of the Bruneel de la Warande family now houses Kemmel's town hall.

Initially, the climb was quite gentle, but once outside the park and into the provincial domain De Kemmelberg, the path starting climbing more seriously, meandering through the woods until, upon meeting a cobbled lane, a white wedding-cake building with an ornate tower could be glimpsed. 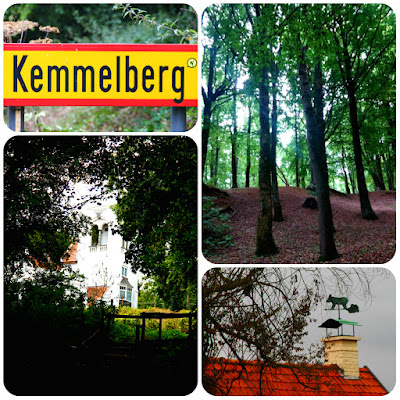 The building is a hotel and restaurant called the Belvédère, and its tower is a tourist attraction which can be climbed for a panoramic view. But as silly us only found this out after our visit, we'll have to return next year. 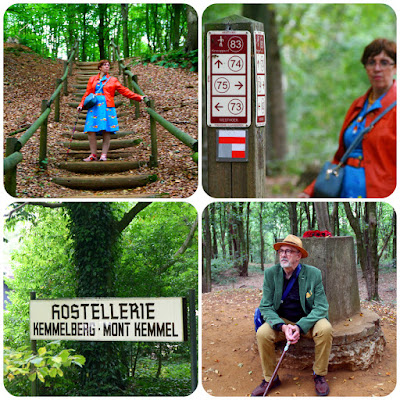 Anyway, we still had another climb ahead of us before we were at the very top, which was marked by a stone pillar. They could have been considerate and supplied a bench for weary climbers to rest upon, but no! 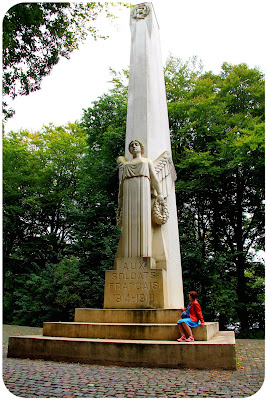 Near the summit is an impressive French memorial which commemorates the heavy fighting which took place here in April 1918.

The 18 metre-high column, popularly known as "The Angel", was erected in 1932 and looks wistfully over the battlefield where so many died. 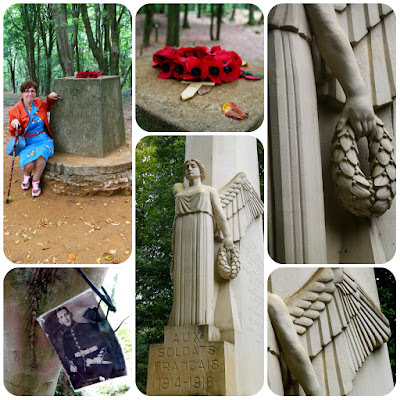 A poppy wreath had been laid out on the stone pillar, and nearby we found a laminated photo of a soldier fastened to a tree. Written on the back was the soldier's name, Patrick Gammell, of the Royal Irish Fusiliers, who died here on 18 April 1918.

Oh, these hills are alive with wartime memories! 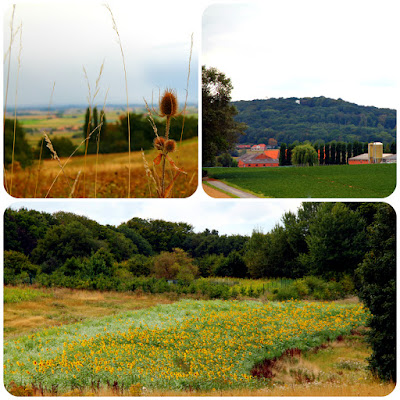 Having reached the top, all was downhill from here. There were hazy views over the countryside to enjoy, as well as a field of sunflowers nestling in the Monet-like autumnal landscape.

Eventually we reached Kemmel's village square, where our car was parked.

Driving towards our final destination for the day, a backward glance rewarded us with a view of the wooded Kemmelberg, the Belvédère tower appearing as a beacon among the trees. 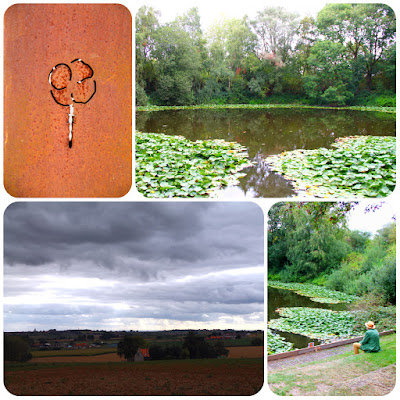 A war memorial of a different kind is the Pool of Peace near the village of Wijtschate, 4 kilometers down the road from Kemmel.

This peaceful, secluded pool, 12 meters deep and with a diameter of 129 meters, is the site of the largest of 19 mines blown by the British Army under the German lines in the early hours of the morning of the 7th of June 1917, killing as many as 10000 German soldiers.

As if on cue, the sky started darkening, with dramatically menacing clouds watching over this deceptively peaceful but war-riddled landscape.

Apart from that, it didn't look too well on the weather front. But more about that and what we did next in my next post.

Posted by Polyester Princess at 19:38