Whenever we're staying at our little getaway cottage in Belgium's beautiful west country, a day trip to the seaside is on our menu. However, as the end of our week's holiday doomed on the horizon, we still hadn't made it to the seaside as the weather gods had been conspiring against us.

Friday arrived and as we were keen to avoid the inevitable weekend crowds, this was actually our last chance.

We were in luck, as there was no mention of rain, even if the weather forecast said it would be a bit windy. Perfect for blowing away the last of the cobwebs, we thought. 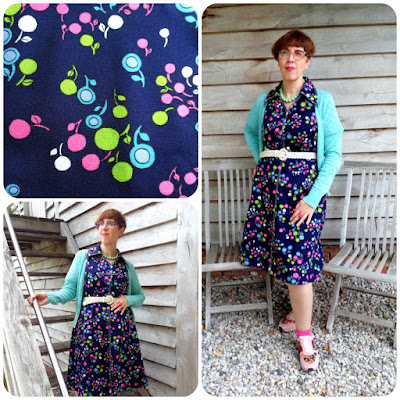 But first things first, as before we can start the day's journey, I have to show you what I was wearing.

This vintage polyester frock is another one that has been residing in my wardrobe for ages. When I posted it on Instagram, someone remarked that the print reminded them of balloons flying up into the evening sky, which I thought was rather lovely. Alas, they're not balloons but flowers. I've included a close-up, so that you can see that they have leaves sprouting from their stalks.

Once again, the dress came with its own belt, which I replaced with a recently charity shopped white woven leather one, which is a current favourite. I opted for a light blue beaded necklace and wore my King Louie cardi in the same colour on top. 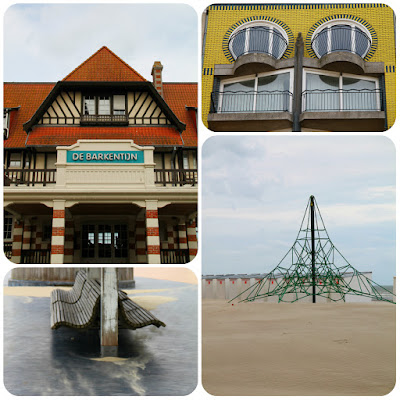 The destination we'd decided on was the coastal town of Nieuwpoort, but first we drove down to De Panne, which is the resort nearest to where we were staying. There is a free car park here, less than a hundred meters from the nearest tram stop, so it is actually a no-brainer, as you can catch the tram to anywhere along the Belgian coast from there. 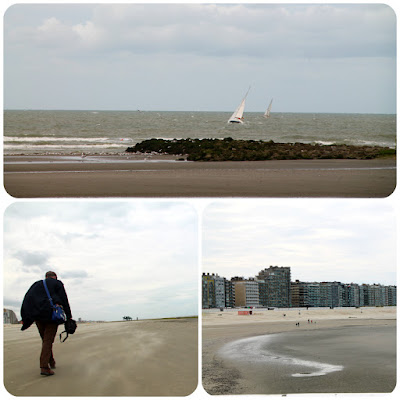 There was a gale force wind blowing, so any remaining cobwebs were soon dealt with the minute we alighted at Nieuwpoort Bad, the seaside part of the town.

After a spot of lunch, we walked along the beach, or at least we tried to, as the wind was either propelling us along at full speed or doing its best to keep us rooted at the spot while overdoing its Mr. Sandman routine if we tried to walk against it.

Looking back at the promenade, you can see the seemingly endless line of high rise apartment buildings which are an unfortunate feature of the Belgian coast. The hotel De Barkentijn, as seen on the top left in the second collage, is a a lone survivor from a bygone age, while the Art Deco style yellow-tiled building on the top right does its best to bring some cheerfulness to the overall drabness. 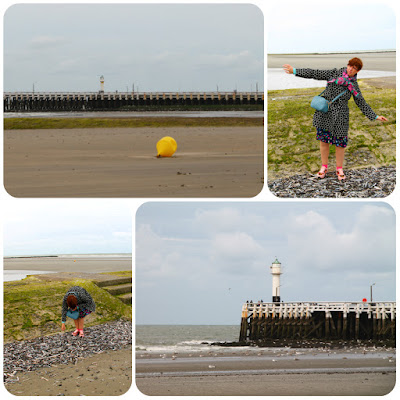 We walked into the direction of the jetty, which is actually one of a pair built in 1865. This is the western one, with a length of 490 meters. The miniature lighthouse at its head (and that of its twin) houses a signal lantern and foghorn. 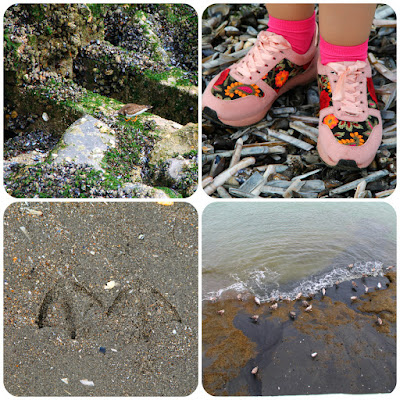 Having climbed a slippery breakwater, we were suddenly faced with a thick carpet of razor shells at the other side.

Back on the wet sand, the footprints left by my pink floral sneakers were joining those of the omnipresent squawking and wailing gulls. 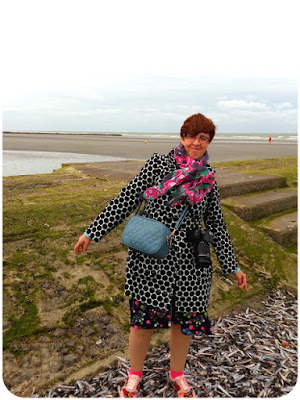 We walked briefly along the jetty, but strong gusts of wind were soon forcing us back inland.

On the rocks below, all manner of seabirds were feasting on the hapless mussels and other shellfish which were left stranded by the tide.

The eastern jetty is slightly longer, jutting 543 into the sea. The two mighty jetties are ceremoniously guiding the River IJzer into the North Sea. 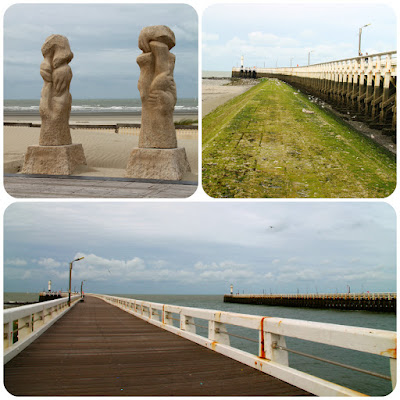 The River IJzer is unique in that it is the only Belgian river flowing directly into the sea and, at the confluence of the salty seawater and the fresh water of the river, is a nature reserve which has its own very distinctive fauna and flora. 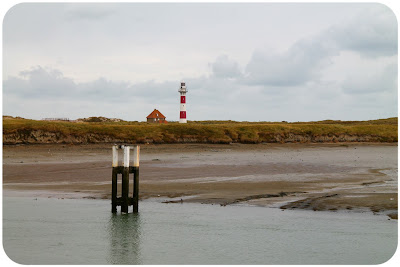 .
Due to the tidal movement a unique area of saltings and mud flats was created, an ideal breeding ground for a rich variety of worms, snails, algae, shells and crustaceans. The continuous interaction between the salt and fresh water in the IJzer estuary also created a special biotope characterized by various salt loving plants.

The nature reserve itself, which is on the right bank of the river, can only be visited with a guide, but you can walk alongside it on a path with several lookout points, a walk we did a couple of years ago. 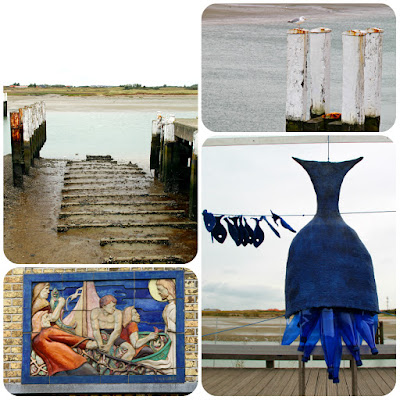 Now, we limited ourselves by walking along the 2 kilometer boardwalk promenade which follows the river from the North Sea to the marina near the inland part of the town, Nieuwpoort Stad.

Several works of art could be admired along the route. The most striking was this one, called Plastic Fish (bottom right).

Exhausted and with eyes and ears stinging from the wind, we arrived at Nieuwpoort Stad, where we admired a mosaic bas-relief plaque on the façade of the fish mine, and then took the tram back to De Panne and our car. 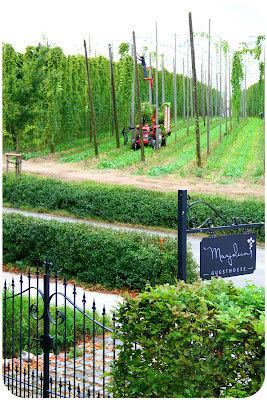 Arriving back at our cottage in Poperinge, we were delighted to see that hop picking had finally started in the hop fields across the road and we watched the vertiginous proceedings from the perch of our first floor window.

Getting up on Saturday, we were greeted by sunshine and blue skies. The blasted weather forecast, however, said it would most definitely rain later that morning and again in the afternoon.

As we'd planned a walk in the area, we were none too pleased and dithered over what to do instead. 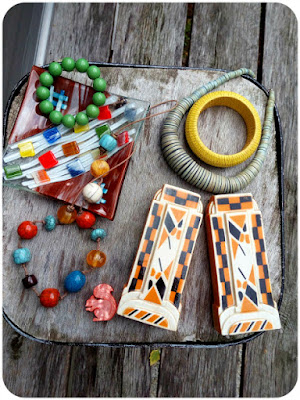 In the end, we decided to go ahead regardless, taking our raincoats and umbrellas and stopping at the local supermarket for sandwiches for our planned picnic.

We also nipped into the town's small charity shop, where our efforts were rewarded by a funky glass dish, two Art Deco vases which were in a bargain bin and priced at € 1,50 for the pair, and some jewellery. I spotted the squirrel brooch as we were about to pay at the till. 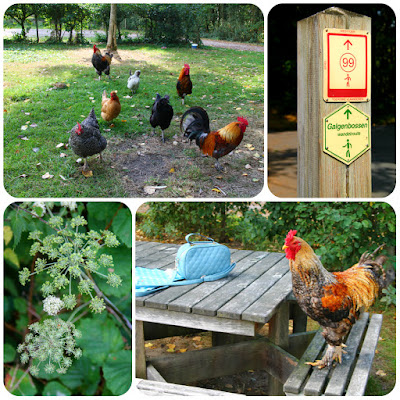 Armed with sandwiches and drinks, we made our way to a nearby nature reserve called the Galgebossen, which translates as Gallows woods. Apparently gallows stood at the edge of them until the early 18th century.

Upon arrival, we were happy to see a picnic table in a small enclosure next to the car park, so that we could comfortably eat outside instead of having a car picnic. Not quite that comfortable, it turned out, as we were immediately accosted by a gang of chickens. Not only did we have to clean their mess off the table and benches, we had to share our sandwiches with them. Believe me, there was no saying no to this formidable chap (bottom right) which seemed to be the leader of the gang. 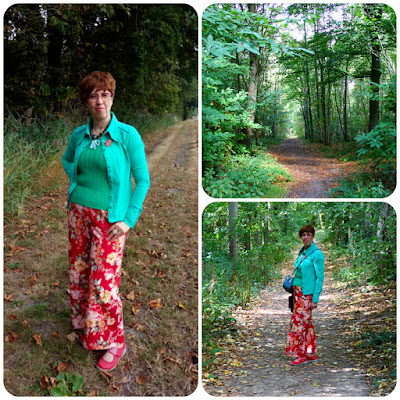 With all out dithering, we'd forgotten to take outfit photos, so we took them during our walk instead.

My second pair of trousers came out of my suitcase. This floral delight was a sales bargain from New Look last Winter, while both the sailor style short-sleeved jumper and the shirt (to which I'd pinned my new squirrel brooch) were charity shopped. Both are from the now defunct Belgian label Wow To Go.

As I was about to retrieve my raincoat from the boot of the car, I was surprised to find it missing. It turned out I'd left it behind at the cottage, another victim of that morning's dithering. 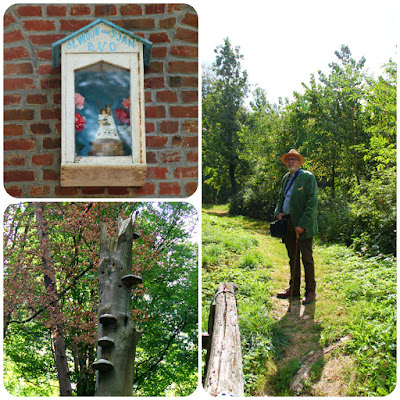 Our walk took us through a mixture of woodland and fields, at one point crossing a road where a lonely house stood complete with a tiny chapel fixed to its façade.

It might have been only the first week of September, but it definitely felt like Autumn, especially when we were walking along that leaf-strewn woodland path. 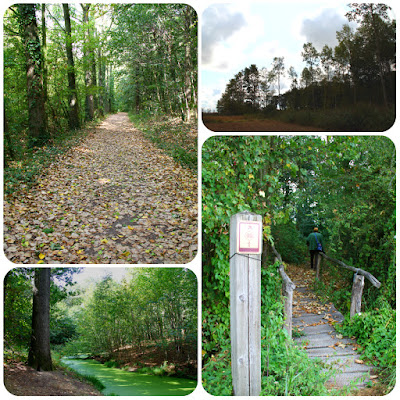 Patches of cloud and sunny spells alternated throughout our walk, but much to our relief we made it back to our car without facing even one drop of rain.

On our way back to the cottage, we stopped in Poperinge for an afternoon treat of cappuccinos and waffles. At that point, the sun was out in full force. 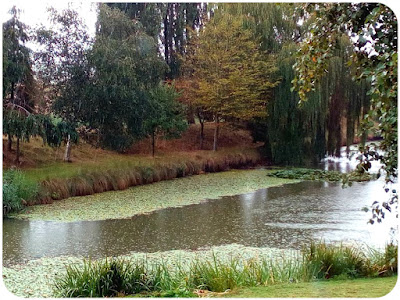 The forecasted rain finally came when we were back at the cottage, which seemed like a fitting end to our week's holiday.