I'm the first to admit I'm feeling more than just a little bereft now that I've finished my travelogue. Telling you all about our little holiday was such a pleasure and reliving it all in the process was almost like having a second holiday.

But that's it for now, it's back to earth and the order of the day. What's more, with all that travelling, I really do owe you a recap of what else has been going on in my life. 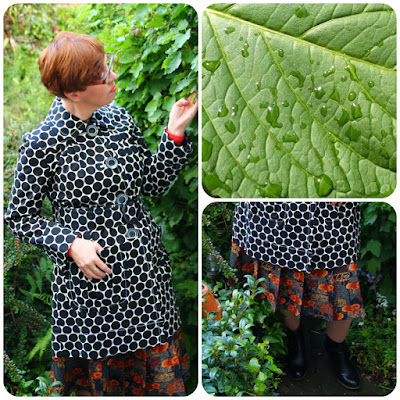 Rough winds do shake the darling buds of May
~William Shakespeare, Sonnet XVIII

And what about steady downpours, drenching showers, hailstorms and temperatures in the low single figures? That first weekend of May we were served it all, including those rough winds. Not that there weren't any sunny spells on the menu, but they were brief and I'm sure they were only thrown into the mix to taunt us.

Sick of my Winter coats, I braved that wet and chilly Saturday wearing the slightly inadequate Phase Eight raincoat I charity shopped on the first day of our Salopian (*) holiday last year. 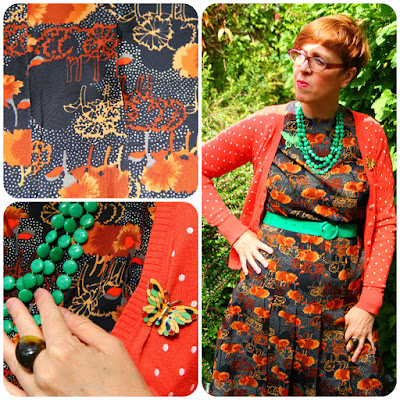 One upside of the unseasonable weather was that I was able to wear the long-sleeved frock I found while out vintage shopping with my friends on  Easter Saturday, before putting it to bed until Autumn.

The orangey tones in its print prompted the addition of an orange polka-dot cardigan, while I opted for a green belt and necklace to provide some contrast. The same shade of green appears in the brooch I chose, a multi-coloured enamelled butterfly. 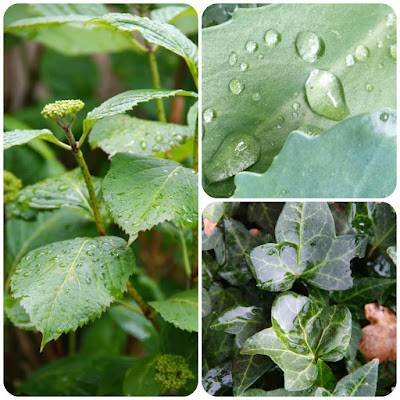 Speaking of green, our little jungle of a garden was (and still is!) looking at its lushest, as it always is this time of year, and I'm sure it was welcoming the life-giving rain-drops with open arms.

We weren't too pleased, though, as we had been looking forward to our first outdoor flea market of the year. Needless to say, the stormy weather firmly put paid to our plans so, desperate to be out of the house, we went charity shopping instead. 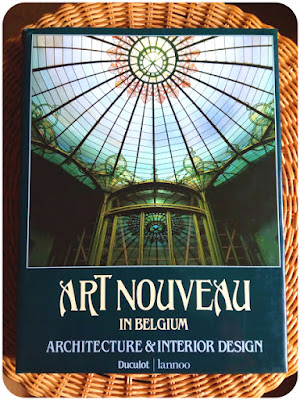 At first it looked as if we would be out of luck in that department as well, as we left the first two shops empty handed. Not wanting to give up just yet, we decided to try one more shop, and visit the one in our village before calling it a day.

And I'm glad we did, as less than a minute after walking in, I happened upon this fabulous book, a heavy and richly illustrated tome on Art Nouveau in Belgium. 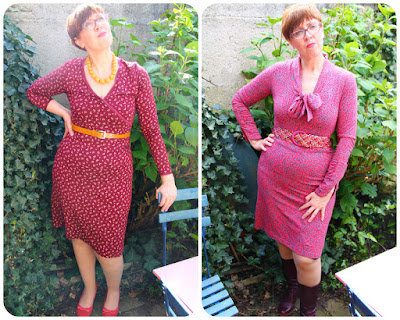 The clothing department can be a bit hit or miss here, so I was happy to find these two new-to-me dresses in similar hues. On the left, another King Louie one and on the right, a pussy-bowed frock from Belgian label Mer du Nord, which I wore to work later that week.

There was a pair of  raspberry red suede Tamaris shoes waiting for me too. I didn't really need another pair of shoes and in fact I wasn't even looking, but what can I say? They caught my eye and they were my size and at € 4 too good a bargain to be left behind. 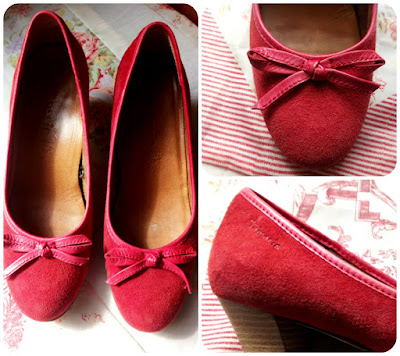 The weather gods continued to plague us on Sunday, so we stayed at home, making a start on browsing the bagful of holiday brochures and leaflets we brought back last year, and getting into the mood for our UK holiday towards the end of June.

In her comment on my previous post, Veronica asked me where exactly we were off to, which will be Shropshire and the Welsh borders, same as last year.  Less than 5 weeks to go now! 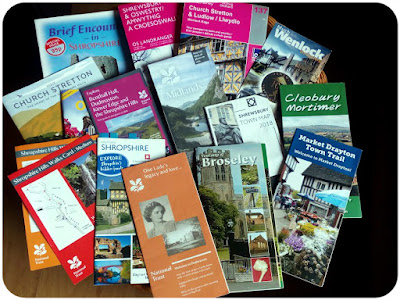 There was some improvement in the weather in the week that followed and one evening after work, I cut a posy of Lily of the Valley so that we could enjoy their intoxicating scent inside.

We've inherited the plants with the garden, but they tend to travel around a bit and, having currently taken up residence in a small patch behind our garden angel, they're not in the best position for us to properly enjoy them.

Watching the bees stocking up on nectar, darting from one tiny flower of our Cotoneaster bush to another, is quite hypnotizing and the soundtrack created by their buzzing choir is nothing if not mesmerizing. 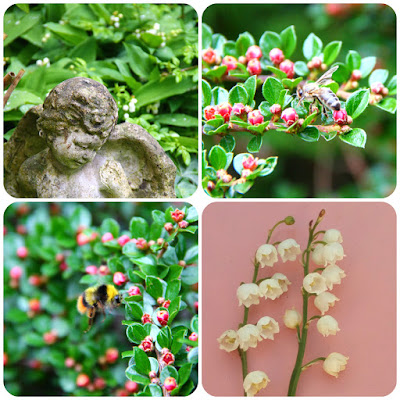 Watching the garden grow and listening to the sound of honey being made is such a privilege, soothing my frayed nerves after a particularly stressful day at work.

Modern technology is all very well, but being without internet for almost two days meant life at the office came to a grinding halt, and it certainly wasn't much fun having to catch up on a mountain of work when it was finally fixed. 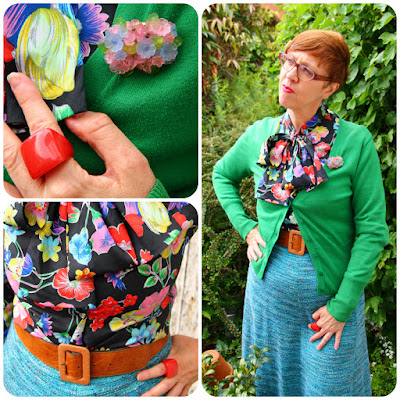 As wearing colourful clothes always makes me feel better in my skin, I opted for full-on colour by choosing a blue skirt, in a textured fabric speckled with green, cream and red, and a black pussy-bow blouse covered in blowsy multi-coloured flowers.

A wide tan belt with a rectangular buckle, a red plastic ring and a pink and blue flower brooch pinned to my green cardigan were my accessories of choice. 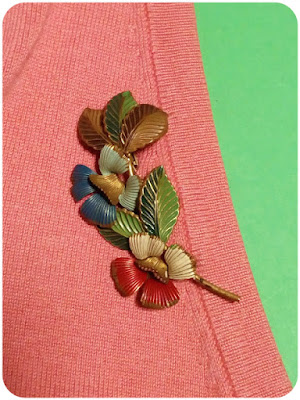 Now that we're on the subject of brooches, how gorgeous is this vintage metal flower brooch? It was a present from my friend Inez, and I'm swooning! 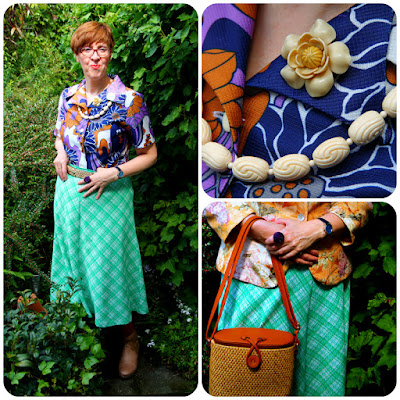 And so, another weekend rolled along, bringing with it another charity shopping trip on Saturday before last.

In spite of the chill in the air, I was determined to wear short sleeves, and planned my outfit around this groovily patterned blouse in hues of navy, lilac and orange. However, I didn't feel the solid green skirt I'd originally planned to wear with it. Casting around for a suitable substitute, I finally hit upon this green plaid midi skirt in a polyester knit fabric. 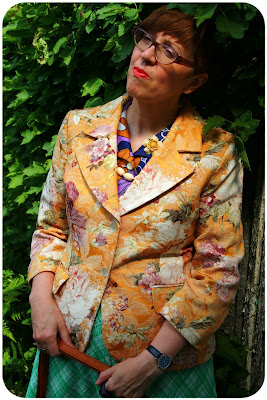 The yellow-based floral blazer, made from a light-weight tapestry fabric, wasn't nearly warm enough for what looked deceptively like a Spring day but I was determined to wear it anyway.

I was carrying the basket bag I bought in a cheap pop-up shop in Antwerp back in April and which I'm feeling slightly guilty about, especially after reading Vix's post. 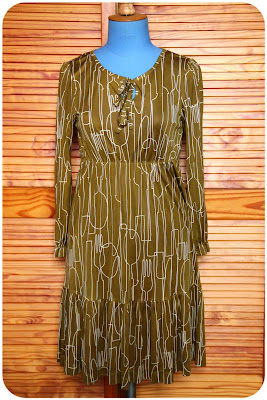 I'm ending this game of catch-up by showing you our charity shop finds of that day.

The shop we went to is a new one, opened as a pop-up only the week before, after the lease of their previous premises had ended. We never liked that rather cramped little shop and are happy to report that their new location is not only larger but much better laid out too.

The jury is still out whether the dress Angelica is wearing here is me, but I love the unusual cutlery print and the olive colour. Oh, and it's Orla Kiely! Not bad for € 4, surely? And I've never ever found any Orla Kiely in a Belgian charity shop before. 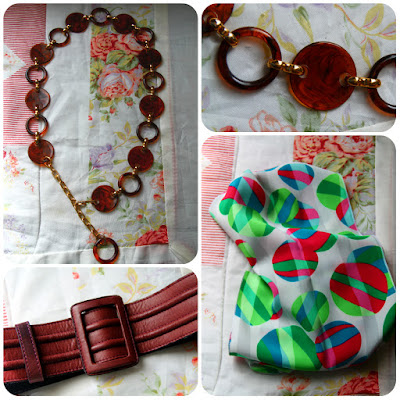 I always love having a rummage through the boxes of belts and scarves for inexpensive additions to both of my already extensive collections. In fact, the vast majority of them are second hand.

This time, my finds included a funky scarf and two very different belts. The chain and tortoiseshell plastic belt is stamped with a Made in West Germany mark, which confirms that it is vintage.

(*) relating to or characteristic of the English county of Salop, now known as Shropshire, or its inhabitants.