When April steps aside for May

I'm briefly interrupting my travelogue for an update of what else I've been doing and wearing. There might even be one or two finds to show you as well!

So, let's retrace our steps to the Easter weekend, and to Easter Day in particular.

We had been graced with the most delicious summery weather all weekend. Temperatures had soared into the mid-twenties and, while our neighbour was getting sunburnt up on his roof, we sought refuge from the ongoing sawing, hammering and drilling by going for a walk in the shade. 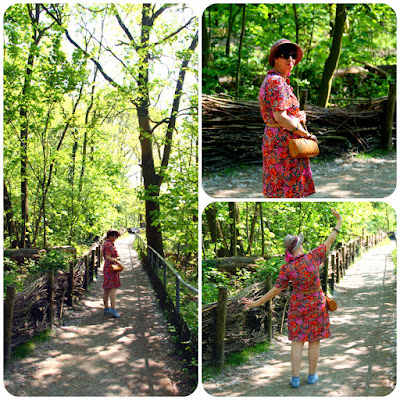 Just a short drive from Dove Cottage, in a neighbouring village, is a recreational area established at one of the chain of forts surrounding the city of Antwerp, built between 1859 and 1864.

A path alongside the old fort's moat takes you into the domain, with one or two paths leading off it and circuiting the fort. If you continue on the main path, at one point it takes you through some of the atmospheric, time-forgotten buildings. 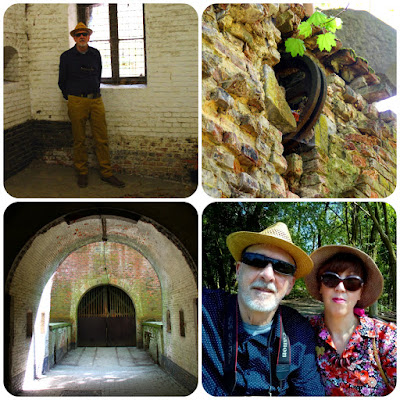 I was barelegged but not bareheaded, wearing my favourite sunhat for the first time this year, with a scarf I'd scored the day before wrapped around it. My sunglasses, with their charity shopped frames, protected my eyes from the glare of the sunlight, which seemed to have doubled in brilliance when we emerged from the semi-darkness of the fort. 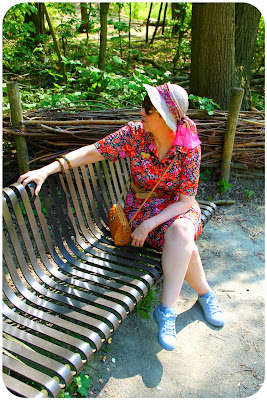 I'm sure you'll need sunglasses too when spying my glow-in-the-dark legs. Now where did I put that bottle of fake tan again?

My dress was charity shopped on my birthday in 2016, while both the woven fabric belt and the lacquered wicker bag were charity shop finds as well.

Uncharacteristically, I was wearing sneakers, a retail buy from last year. I succumbed to them as they are a rare pair which doesn't have those thick white soles, which I'm not a fan of, to put it mildly. 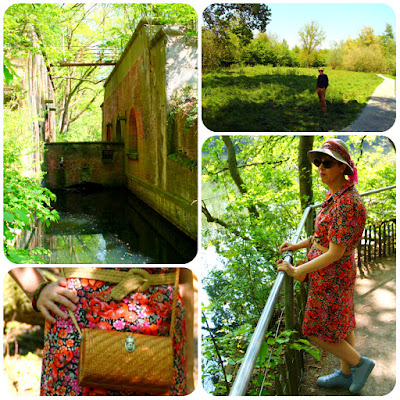 So, what else did we do that Easter weekend?

Retracing my steps even further, on Saturday I had a vintage shopping date in Antwerp with my friends Ingrid and Inez. You've already seen what I was wearing that day (here), but the question is, what - if anything - did I find?

I'm happy to say that we were all successful and went home with lots vintage and second hand treasures for next to nothing. 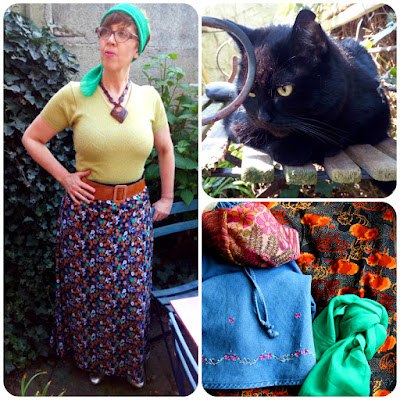 At Think Twice, where everything was € 3 that day, I found the floral maxi skirt and the lime green short-sleeved knitted top I am wearing in the above collage, as well as a lightweight denim skirt with a row of embroidered roses at the hem, which you can catch a glimpse of on the bottom right. We finished our shopping at Melting Pot, a shop selling vintage per kilo, where I picked up a long-sleeved polyester frock, black with a gorgeous orange and reddish brown print, and two scarves, one of which I'm wearing here, for a total of just over € 4.

Meanwhile, things have started stirring in Dove Cottage's wild jungle garden, watched over by Phoebe on her favourite perch. 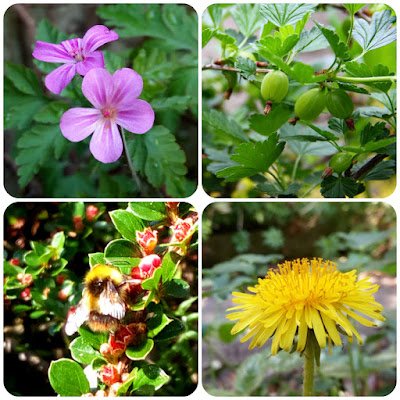 At the back of the garden, I spotted some gorgeous, tiny pink flowers, which I'm pretty sure weren't there before. Some googling revealed them to be Geranium purpureum, a wildflower commonly known as Little Robin,which probably arrived with the birdseed we scatter in Winter. How lovely they are! They can definitely stay. Dandelions are welcome in our garden too.

We will have gooseberries aplenty as well. I'm quite impressed with the size of them this early on, although it will be a while before they achieve their final, ruby red hue.

As usual this time of year, our Cotoneaster bush is a-buzz with bees of all sizes and descriptions, who seem to be exceptionally fond of its diminutive flowers, their constant buzzing providing a drowsy summer soundtrack. 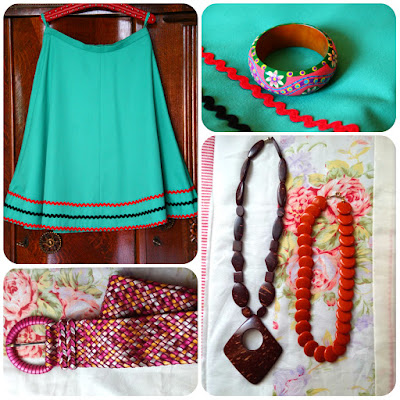 More treasures were found at the charity shops that weekend. Clockwise from top left: a handmade cotton circle skirt trimmed with rick-rack, a hand-painted wooden bangle, two necklaces - note the fabulous polished wooden one on the left, which I'm wearing with my Think Twice finds above - and a multicoloured, woven belt.

Browsing the rail of new arrivals, I discovered this gem of a Crimplene shift dress. The colours might be a little muted compared to my usual colourful attire, but surely the Paisley print more than makes up for that! 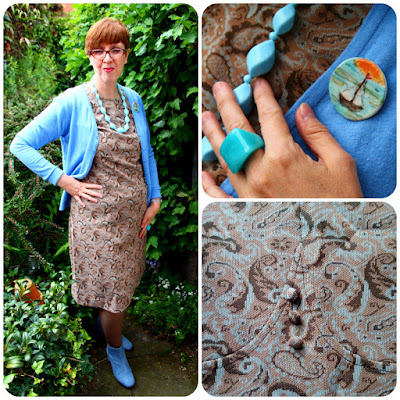 By the time I was back at work after our short holiday, all traces of summer had disappeared, leaving us with temperamental weather more suited to an average March day.

In my reluctance to break out the long-sleeved frocks again, I thought Crimplene would at least keep me warm enough, especially with an extra layer worn underneath. Taking the lead from the greyish blue notes in the dress, I chose powder blue for my cardigan and accessories. You might notice I'm wearing ankle boots in the same colour as well. They were picked up in the sales last Winter, but as they are suede, and thus a bit delicate, I haven't been wearing them much.

My ceramic brooch, with its little boat sailing off into the sunset, was a gift to myself from a craft shop in Cardigan in June 2017, and so will be forever linked to that rather washed out holiday. 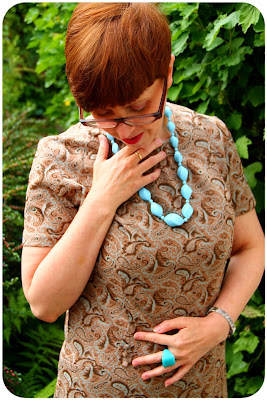 I only had two days of work to go through before our public holiday on the First of May. I can't say I minded very much.

Making use of the time on my hands, I sorted out my boots and shoes, putting away most of my Winter ones and bagging up those which didn't pass muster for charity.

Then I brought out all of my Summer shoes and sandals and sorted them by colour, adding one or two pairs to the charity bag. There were still more than enough left, though.

Those of you with minimalist tendencies, please look away! 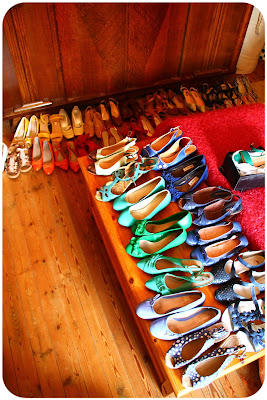 All of these have been neatly put away into my IKEA shoe boxes, which have semi-opaque flaps closing with Velcro, and which live in a tower building in our spare room, each one resting on its own pair of shelf brackets. 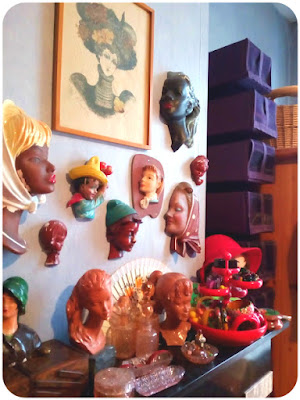 I had the brainwave of making a snapshot of each pair of shoes before putting them away, putting them into an album I can scroll through on my phone for easy reference. 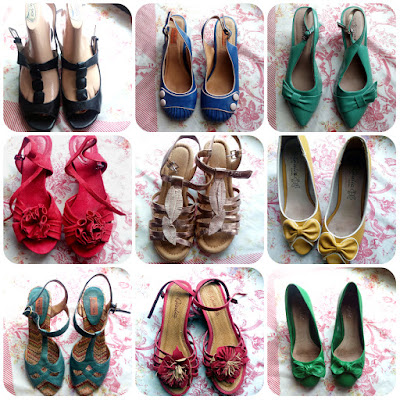 Now, which pair shall I wear today?

As at the time of writing the weather is still letting us down, I was actually wearing boots today, but never mind ... 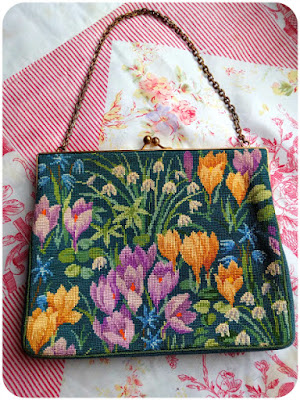 I am leaving you now with my latest find, a tapestry evening bag I happened to run into at Think Twice last Friday.

How gorgeous is that print? And how often do you come across a green tapestry bag? I'm sure you'll agree that this has my name written all over it.

There will be another episode of my travelogue in my next post. Will you join me again?