As January seamlessly segues into February, this wishy-washy Winter continues.

It hasn't yet been really cold here in Belgium, the temperature only dipping one or two degrees below zero at the very most, nor have we had any significant amount of snow.

Instead, there's been an endless string of dull grey days, more often than not accompanied by relentless, non-stop rain.

The lack of sunshine has seriously depleted my Vitamin D levels, leaving me worn out, with my energy levels at an all time low.

If you hadn't noticed yet, January and February aren't exactly my favourite months!

But once again, I am finding solace in the rainbow of colours offered by my wardrobe. 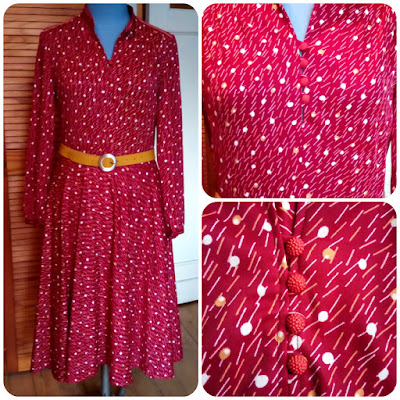 Why not wear a bit of raspberry red for a change? It was love at first sight for this gem of a dress, bought at Antwerp's Episode shop, which is part of a chain of vintage clothing shops of Dutch origin.

In spite of it being only a short walk from my office, I only frequent the shop once in a blue moon, as its prices are a bit higher than what I'm used to pay at Think Twice.  I have to admit they've got some really nice stuff, though, and the shop is spaciously laid out ever since they moved to their current premises.

I gladly made an exception for this delightful fit-and-flare frock, its print a confetti of white and yellow dots and dashes. 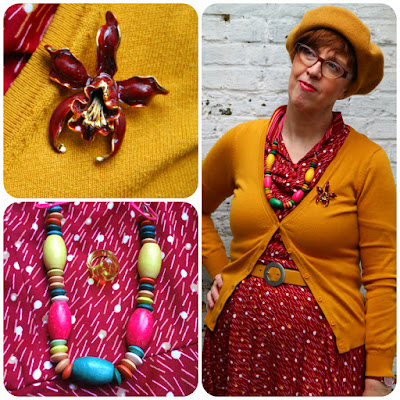 The tiny bits of yellow in the dress's print prompted the wearing of more yellow, starting with a belt with a round metal buckle.

My yellow cardigan made another appearance, yet again providing instant sunshine, while the brooch I pinned to it, a rather heavy metal orchid, ties in with the red tones of the dress. It was charity shopped in Shropshire last Summer, but I can't remember where exactly. 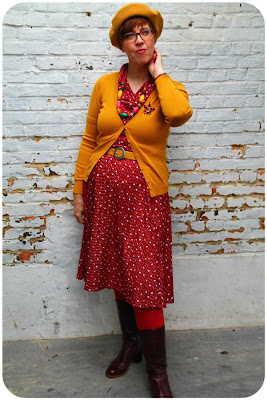 Yellow would have been the obvious choice, but I'm wearing red opaques here, and I opted for my  burgundy boots, which are both comfortable and pleasing to the eye.

When it's raining, which it has done rather a lot lately, and I have to commute, my default go-to boots are either my slightly worn slouchy boots or a pair of flat-heeled tall ones, both in a rather uninspiring shade of taupe.
I have a fear or ruining my "good" boots and shoes, so maybe I should take a leaf out of Sheila's book and carry them to work in a shoe bag. 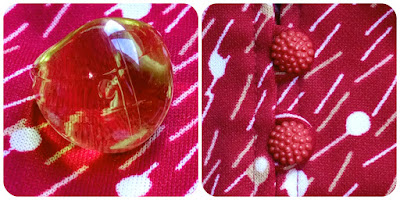 I almost forgot to mention the transparent yellow plastic ring I was wearing! And aren't those buttons the sweetest? They do look a bit like raspberries, don't you think? 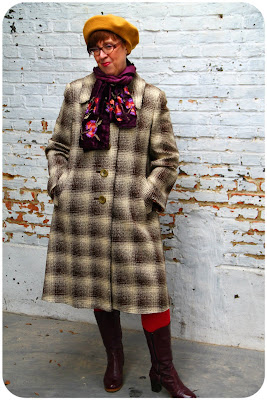 Apart from my yellow beret, my outerwear consisted of a vintage coat I found at Oxfam about 3 years ago. It's got nice deep pockets I can shove my hands in, but the lining of both is torn beyond repair. 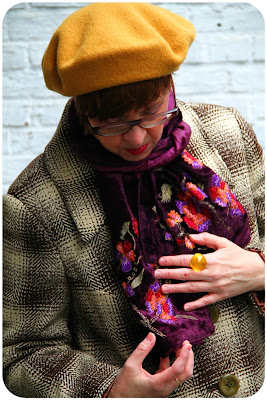 The embroidered crushed velvet scarf in a lush shade of purple was a € 0,50 flea market find.

So, this is what I wore on Saturday before last.
Now, if the weather had been dry, we would have put on our walking boots to brave the muddy paths of the nearby park. However, as it continued to rain, we had to make do with a trip to the charity shops. 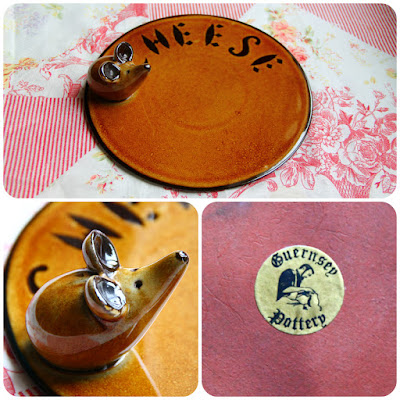 The first shop we went to was the one with the scary owl, and I have to admit that I was a tiny bit disappointed that he was no longer there. I can only hope he's gone to a good home!

This Guernsey Pottery cheese board, complete with ceramic mouse, came home with us instead. 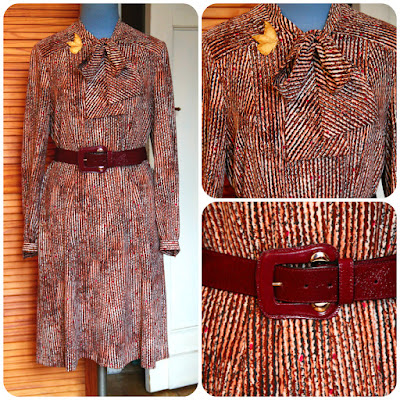 A vintage pussy bow dress with squiggly stripes in cream and brown, with a sprinkling of red, was my next buy. I already wore it work this week, but for now you'll have to make do with Angelica modelling it.

The wide burgundy patent belt, which came from the same shop, was a perfect match.

And so are these two cardigans! I was quite spoiled for choice that day. 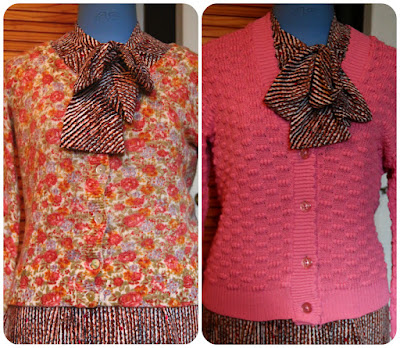 I'm always on the lookout for cardigans to add to my collection, as I do wear them on a daily basis, except during a heatwave.

These chunky knit ones are great for this time of year: a flower patterned H&M cardie and a textured pink one, which I'm guessing was someone's handiwork. 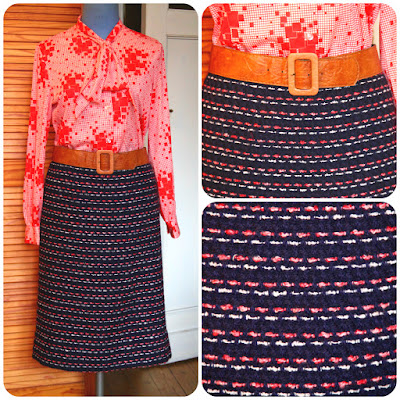 I seem to be accumulating a lot of skirts and this time I was drawn to this fabulous navy, red and white bouclé pencil skirt. Here's Angelica modelling it with a red and white pussy bow blouse which I shopped from my closet. 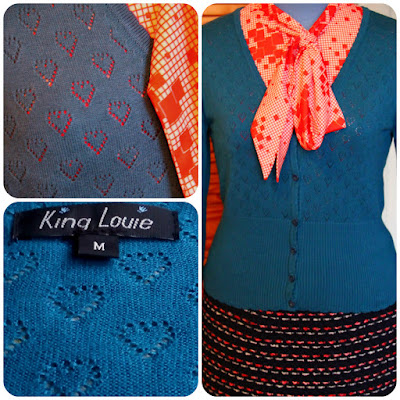 This finely knit fitted cardigan with its ajour hearts is from King Louie. I've lost track of the number of garments from this brand that I've come across in charity shops and over the years I've bought dresses, tops, cardigans and a jacket, all in perfect condition, at the fraction of the retail price.

Not that I'm complaining, but I do wonder why so much of their stuff is donated to charity. It's quite good quality and most of it seems to be hardly worn at all. And it doesn't come cheap either. 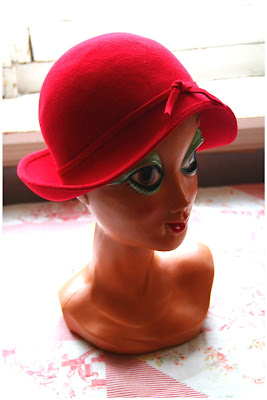 My last find of the day was this fabulous red felt hat, for which I paid a silly € 1,50, its style harking back to the 1920s. Although I think Twiggy looks quite fetching in it, I'm promising to style it for you soon.

In other news, we have finished work at my parents' house, so that we finally have our weekends back. Yay!

And last weekend, the weather cleared up long enough to go for a walk, which I will tell you all about in my next post.

Posted by Polyester Princess at 19:31