Can you believe we're already more than one month into the new year?

Admittedly, January has been a bit of a blur for me, what with work issues and our ongoing work at my parents' house.

For the better part of two months, we have been spending a huge chuck of our Sundays at the parental home, where we have been sorting, clearing and finally cleaning, in order to get the house ready to be put on the market.

As on these days we only had a couple of hours to ourselves, I didn't bother getting dressed. At least not properly, that is. Floral drawstring trousers and a jumper may not sound too shabby, but it isn't the kind of outfit you'd usually find me wearing, and certainly not one I'll be sharing on the blog anytime soon. 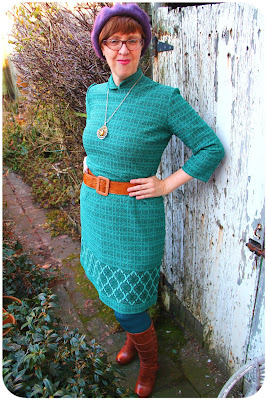 Two Sundays ago however, before changing into my work wear (jeans and an old polo neck, if you're interested), I made the effort of putting on the dress I'd found at Think Twice during the week.

It's a vintage shift dress with a high, stand-up collar, one part of which I've only just noticed wasn't standing up that day. But do you think my photographer told me? 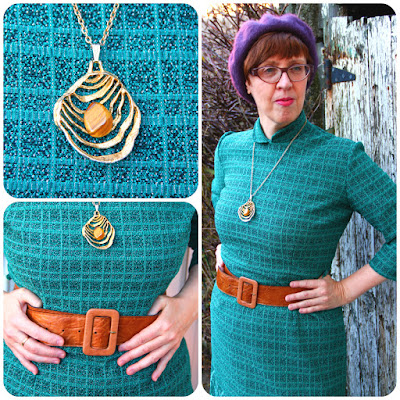 I was drawn by its gorgeous teal colour and the lurex shimmering through the fabric. The contents label, although quite faded, proclaims that it's 95% Crimplene and 5% Lurex!

Apparently, it was designed by Annette Carol of Leicester, England. Obviously, I tried googling the brand name, but no luck. 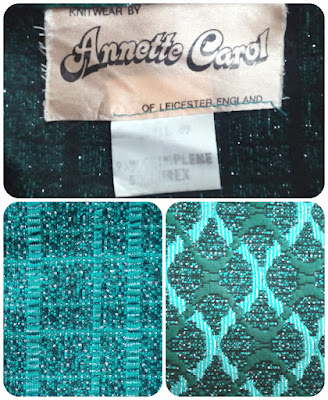 I wore it with my new Tiger's Eye pendant, a charity shopped wide tan belt, and a pair of tan boots.

Speaking of which, aren't they fabulous? They are by Miz Mooz, a sales bargain from many years ago. Unfortunately, I can't wear them for any length of time as they are rather bad for my back. Hence, they're still in perfect condition after all these years. 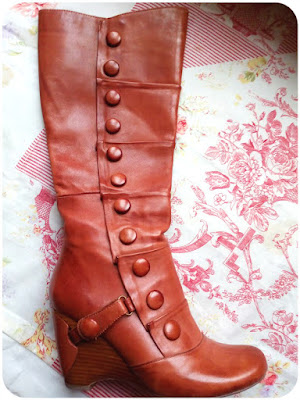 When we were clearing the house's attic, we came across a small cabinet we quite liked the look of. After taking its measurements to make sure it would fit, we brought it home and, following a good clean and polish, it is now taking pride of place in our hallway.

I'd never seen the cabinet before, and neither had my siblings, but chances are that it used to belong to either pair of grandparents. 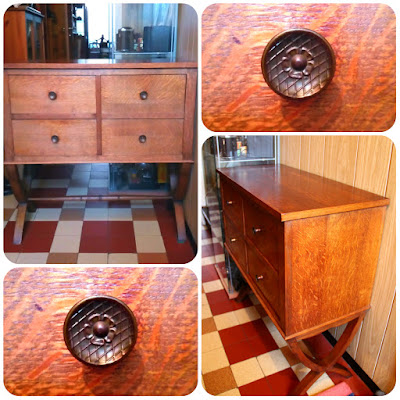 It deceptively looks as if it has four drawers, but the ones on the right are actually a pull down door.

Inside, there's plenty of space for handbags, scarves and berets and there's space underneath for a few pairs of boots so that they no longer clutter up the hallway. 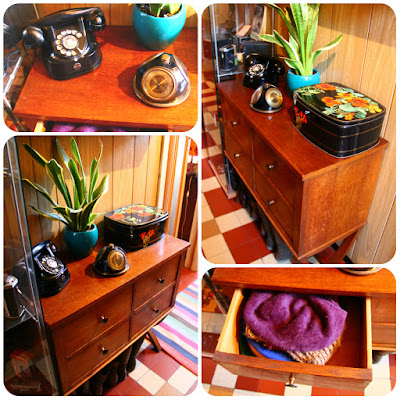 On top, there's a classic Bakelite telephone, which we've had for many years. It seems to look quite at home here!

The round object in the middle is a revolving barometer, thermometer and a hygrometer, which Jos picked up at a charity shop event in October 2017 (see here for a close-up), while the large black tin with the Nasturtiums, a charity shop find from last Summer, currently holds my collection of gloves. 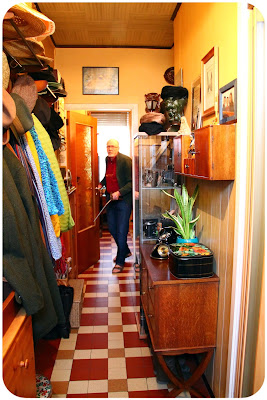 Here's a look at our hallway taken from the front door. You can just make out the edge of our IKEA shoe cabinet on the left, with our vintage coats rack with its jumble of coats, hats and caps beyond.

On the right, above the cabinet, is a small, charity shopped, hanging cupboard, which holds shoe cleaning paraphernalia, amongst other things.

Beyond the cabinet is an IKEA display unit showcasing our collection of vintage cameras.

The floor tiles are original and as you can see they continue into the room beyond, which is our dining room. 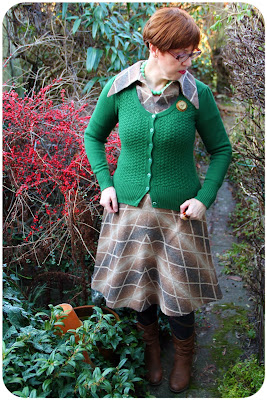 I took the afternoon off on Monday, as I needed to mentally prepare myself for some upheaval at work in the following days.

It was a cold but bright day and we took advantage of the available daylight to show you what I was wearing that day. 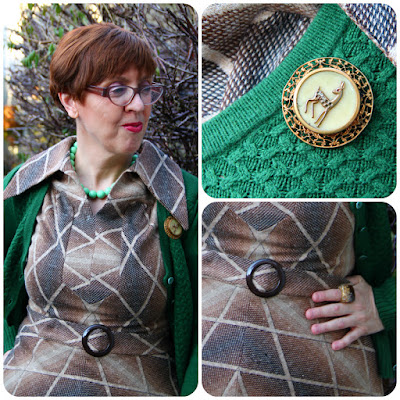 Brown and beige might not be colours you associate with me, but the dress's eye-catching print more than makes up for this. And for once, I am wearing the dress's original belt, as I love its round buckle.

This is another Crimplene dress, although in this case the polyester is joined by 20% wool, which makes it ideal for colder days.

On top, I wore a bottle green charity shopped cardigan, to which I pinned a vintage Bambi brooch, its circular shape echoing my belt buckle. 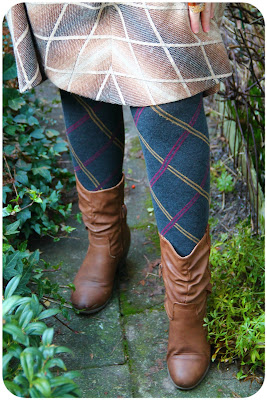 I continued the plaid theme of the dress by wearing warm woollen tights in green, with a plaid pattern in red and yellow.

It was back to work on Tuesday, and oh my goodness, what a stressful week it turned out to be.

I am office manager at a small trading company, with a head office in Miami, and we had a visit from the boss, who told us he would be retiring by the end of February. To cut a long story short, as from the 1st of March, I will have two new bosses, instead of just the one.

They joined us on Wednesday and I'm sure you can imagine my relief when they turned out to be the nicest guys ever. 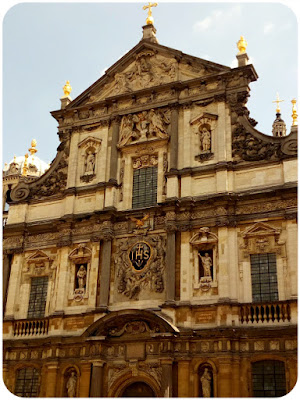 On Thursday, we had lunch together and returning to the office, I simply had to show them this gem of a church, which is located in what looks like a tranquil Italianate piazza.

This is the Sint-Carolus Borromeus church, which was commissioned and built by the Jesuit order between 1614 and 1621, and which counts as an archetype of Baroque architecture. 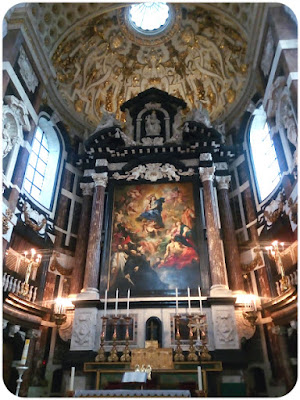 It is the Baroque church of the Low Countries and the church of Rubens, even though in 1718 a fire destroyed the 39 ceiling paintings by his hand.

As luck would have it, the church's doors stood invitingly open, allowing us to admire its stunning interior. 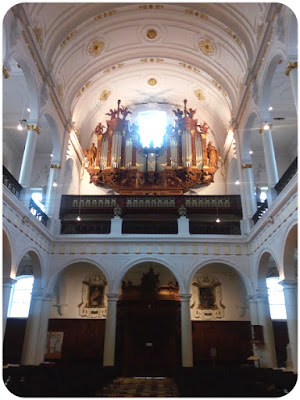 Our visit was enhanced by the mighty organ being played, which made the experience even more awe inspiring. 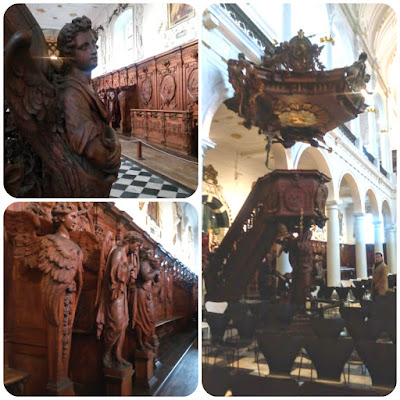 I'm sure I wasn't the only one to get shivers down my spine ...

Now I'm joining Beate, Natalia and Tina at this month's Modish Matrons, and I will be linking to Patti's Visible Monday at Not Dead Yet Style once the link is up.

And finally, I am linking up to Mica's Weekday Wear Linkup!

Posted by Polyester Princess at 19:57