A brief glimpse of Spring

Upon waking up last Sunday morning we were met by two strange phenomena. The first, being of the visual variety, was the most obvious, as it was immediately apparent upon drawing our curtains. The grey clouds had taken a day off, leaving us with a brilliant blue sky and a sunny disposition.

The second was a lightness of feeling which initially wasn't easy to put one's finger on. Then it dawned on us. For the first time in two months it was a Sunday without any obligations, free to spend whichever way we fancied.

Putting the two together, we felt truly blessed that the sun had chosen this very day to grace us with her presence. 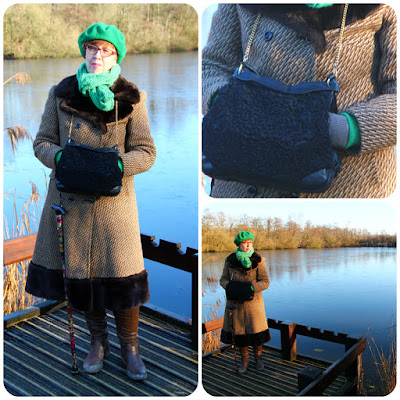 According to the weather forecast, this cloudless, sunny day would be a one-off. In fact, the weathermen said it would only last until mid-afternoon. So, we wasted no time in filling a thermos with strong hot coffee, packing a picnic and heading off for a bracing walk and some much needed fresh air.

I wore my beloved princess coat, accessorized with a green beret and scarf. My hands were kept warm by my fake astrakhan muff which cleverly doubles as a handbag! 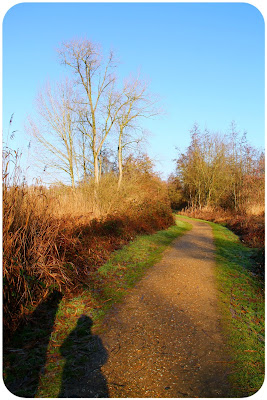 Our favourite nature reserve, Het Broek, where you have followed in my footsteps many times before, was our destination of choice.

The sun was surprisingly strong and it was good to walk and bask in its relative warmth. 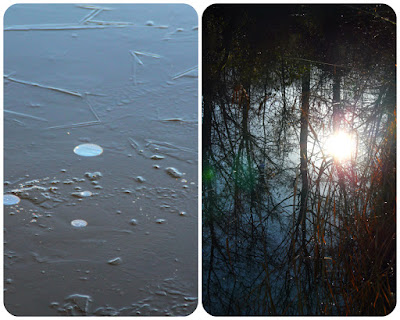 The lakes and ponds were glazed with a fine layer of ice, too thin even to hold the weight of the  resident waterfowl, who could be heard screeching and bickering across the main lake as usual. 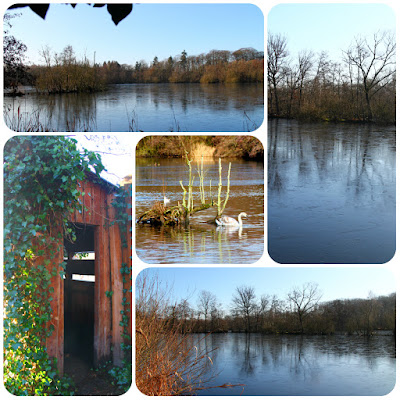 Soon we came to the bird hide, a ramshackle wooden hut looking out over the lake.

It was looking deceptively calm, as most of the birds seemed to be hiding among the reeds bordering the small islands in the far distance.

Only a young swan, still partly clad in its downy plumage, was venturing out on its own. 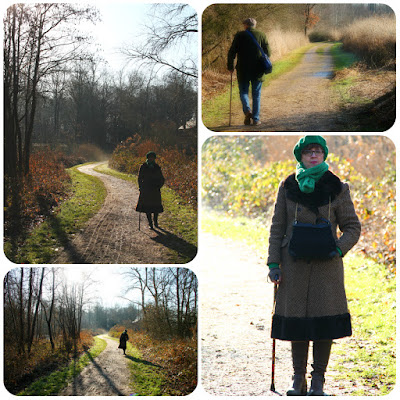 The warmth of the sun after the heavy rains of the last couple of days gave rise to a thin white mist emanating from the sodden earth, creating an ethereal, de-focused world. 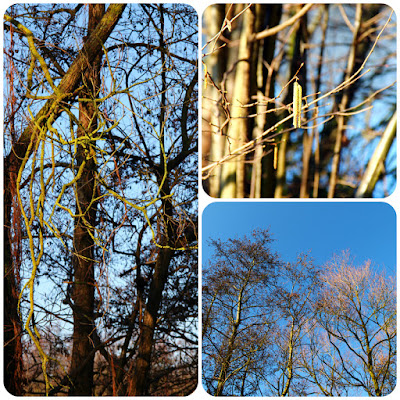 The tangled bushes, which simultaneously carried last season's growth and Spring's new beginning, and the majesty of the high, windswept trees, made my daily worries recede, so that I was only living in the moment and savouring every breath.

I was looking forward to a visit to my favourite part of the reserve, a paradisaical corner the sight of which always fills me with tranquility and a unfathomable feeling of déjà vu

But the path leading to this slice of heaven was closed off and the bridge crossing the brook had been removed. 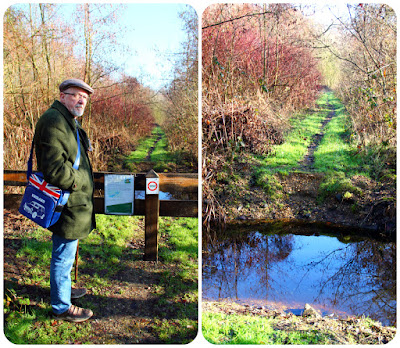 A notice on the gate said the path was permanently closed to protect the family of beavers who had taken up residence here. It is true that we did notice some beaver activity the last time we were here. Obviously, this sounds like a solid enough reason, but I was still feeling quite bereft at the thought of never seeing my favourite place again. Silly me, I'm getting all teary-eyed while typing this. 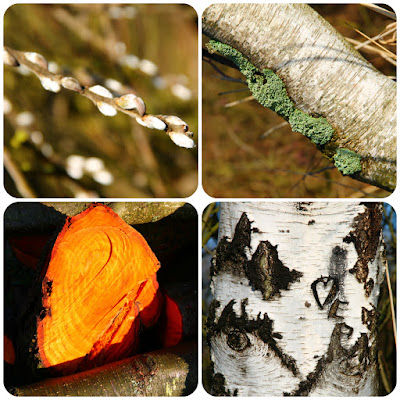 Taking another path instead wasn't nearly as satisfying, but there were still enough sights, sounds and scents to enchant us and even trick us into thinking it was an early Spring day. 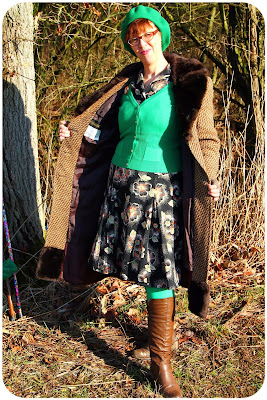 On a path sheltered by a bank of reeds, I tilted my face towards the sun, which was colouring its paleness with a blush on my cheeks while warming up my winter-heavy limbs. 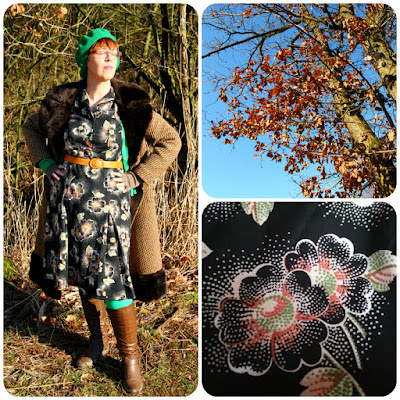 It was warm enough to show you what I was wearing underneath my coat: a black frock patterned with a firework display of flowers in white, orange and green. I wore an ochre belt at my waist and a green cardigan on top, echoing the green of my opaques.

My boots are the ancient pair I'm always wearing for walks of this ilk, and which were still carrying traces of the muddy clay we trampled in on Christmas day. 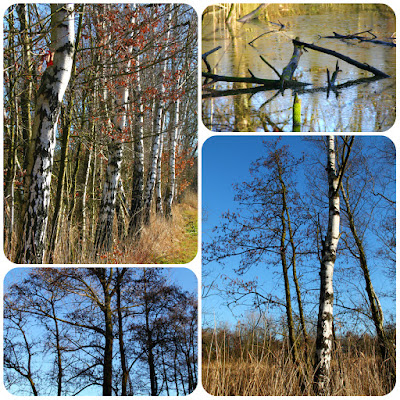 Onward we walked, through a landscape which had time to heal its peat-digging past and become a haven of fauna and flora. 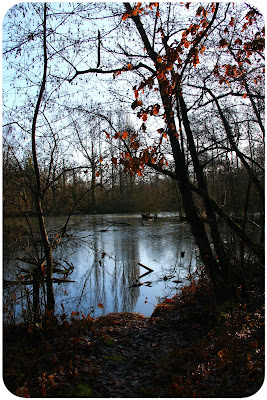 If it weren't for the occasional encounter with fellow walkers, the quiet would have been quite deafening in comparison with our daily life's hustle and bustle.

For this particular girl, however, the quietness was like medicine after the frenetic rush of the last couple of weeks. 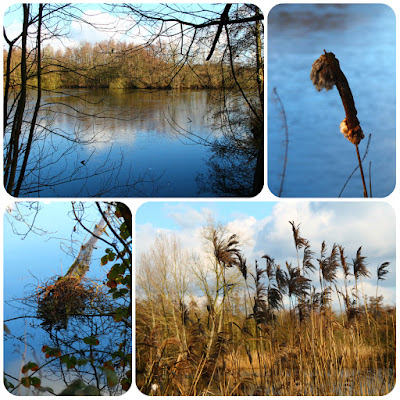 After eating our picnic sitting gingerly on a damp bench, it was time to return to our car.

It was getting busier now that it was past lunch time, and we no longer had the place mostly to ourselves. 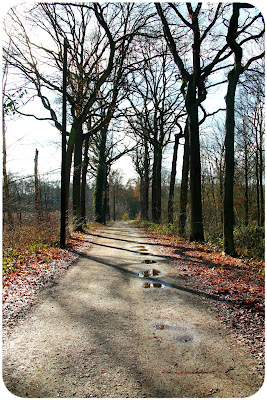 And, true to the weathermen's word, the sun started playing hide and seek with the clouds, until the blue sky we'd waken up to was blanketed once more.

Posted by Polyester Princess at 19:17