You might have noticed that I've been wearing a lot of skirts lately.  Well, I've got quite a selection of them in my wardrobe - some of them unworn! - and as I keep finding new ones at an alarming rate, I thought it was time I stopped neglecting them and give them an outing.

Remember the "curtain couture" skirt I bought back in December? It was the print which persuaded me to take it home, although I wasn't a fan of its rather shapeless cut and poor finish.

Nevertheless, I decided to give it a go last Friday. As the skirt isn't lined, I needed to wear a half slip underneath. I'm still not totally convinced, so it's currently in the naughty corner until I've made up my mind.

I shopped my wardrobe for this delightful blouse printed with orange tabby cats and then added some cat related accessories, even if the cats in question were of the bigger variety. Note the watch with its leopard print strap, and the Tiger's Eye pendant I picked up at last month's flea market. 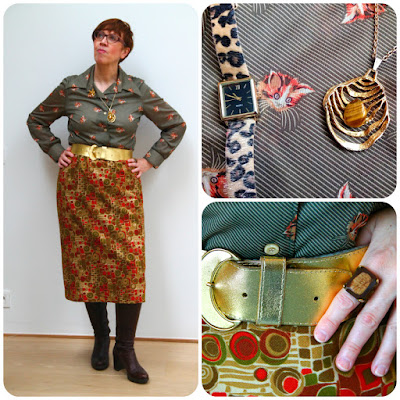 My outfit was completed with a wide golden belt and a two-tone brown ring.

In spite of the symphony - or should that be cacophony - of cats I was wearing, I was fully expecting my limelight to be eclipsed by the real thing, as we were cat-sitting Abby that day.

Abby is a British Shorthair, and her usual personnel, Jos's son and daughter-in-law, Kris and Carolien, were away for an overnight stay, leaving her on her own for the very first time. 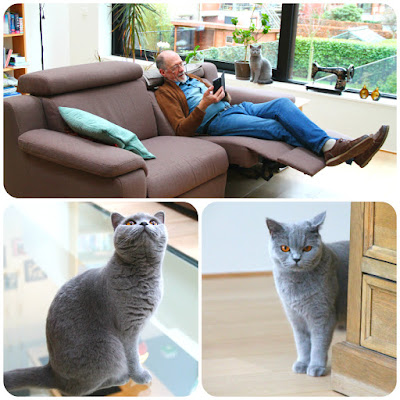 Unlike Phoebe, she loves posing and, with her dense dove grey fur and amazing orange eyes, she has star quality in abundance. But make no mistake: she is quite a diva! 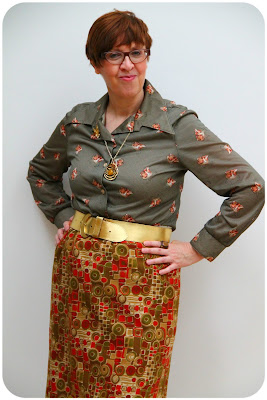 We'd planned to make use of the lofty proportions of Kris and Carolien's living room to take some outfit photos, but needless to say it turned into a full-on photo session starring the delightful Abby! 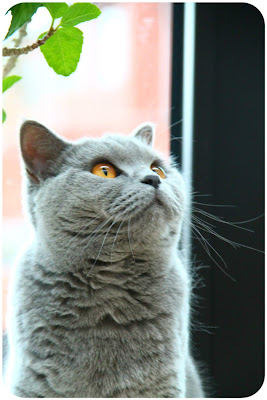 How could I possibly compete with that? 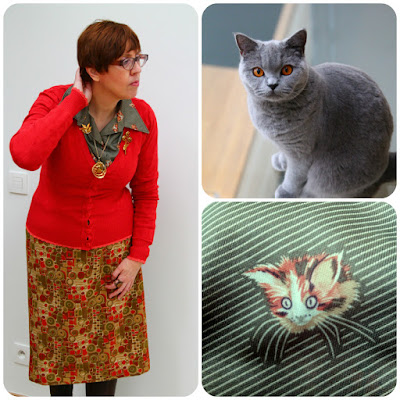 I was wearing chocolate brown boots, charity shopped last year (see close-up here) and wore a red, pink-edged, cardigan on top. I've included the brooch I pinned to it in the collage below. 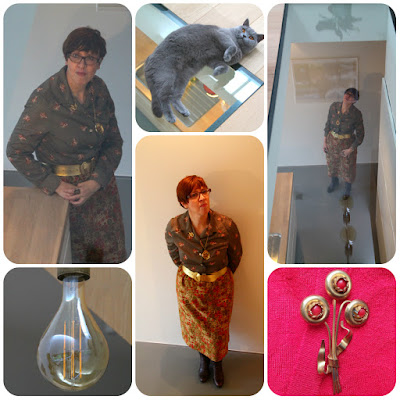 Kris and Carolien's house has the kitchen/dining area on the ground floor, with the living room immediately above it on the first floor. There's a large panel of reinforced glass on the living room floor, through which the kitchen can be glimpsed. 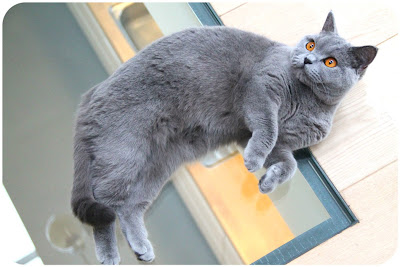 Having no head for heights, walking on the glass panel makes my legs turn to jelly, but Abby doesn't seem bothered by it in the least. 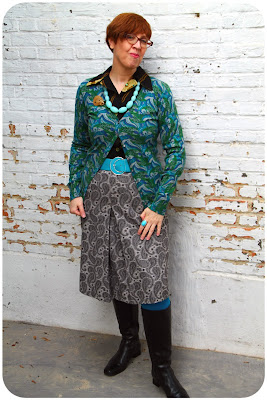 Although I haven't worn it for ages, I've had the skirt I was wearing on Saturday for many years. It's a grey wool Paisley print A-line skirt with a single front pleat. Its label mentions a shop in Vienna. 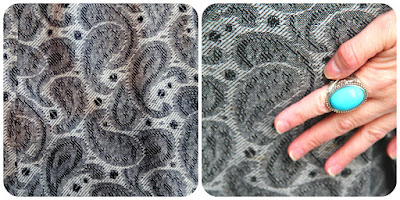 Except for the tights, everything I'm wearing here was either charity shopped or picked up at flea markets.

The ring was rescued from the bag of jewellery donated by my friend's daughter. I kept most of the rings as they are exactly my size for once. Having small hands and fingers, rings are often too big for me. 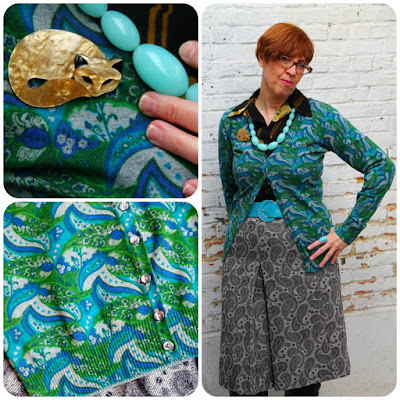 The cardigan, in confusing greens, blues and turquoises (for me, that is!), has a Paisley-esque print which I thought went well with the vibe of the skirt.

To tie in with Friday's cat theme, I added the big cat brooch which I found at December's flea market. Several people thought it was Erstwilder, and it uncannily does look like some of their designs but, not being marked, I'm pretty sure it's a rip-off. 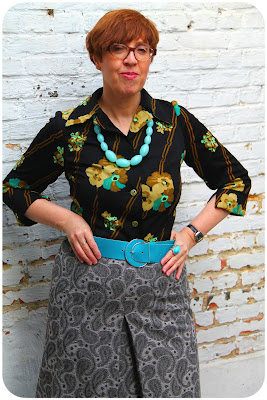 Both the wide turquoise belt belt and the beaded necklace, originally from H&M, were charity shopped.

I used to have the same necklace, bought retail many years before, but I sold it at the very first flea market we participated in, back in 2009.

Why ever I decided to get rid of it remains a mystery, but suffice to say I was glad to spot its sister on the charity shop's jewellery display a couple of months ago. 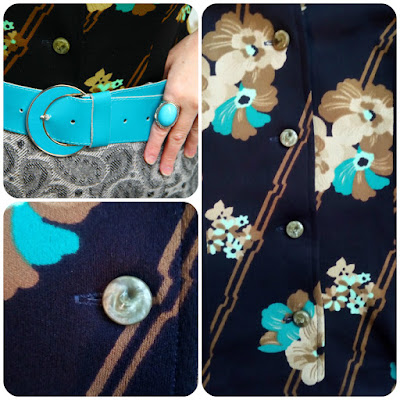 My outfit's final item is another one that's been in my wardrobe forever. This black Diolen blouse was one of my earliest Think Twice buys, and I've always been smitten with its print of stripes and flowers, which include splashes of light blue and turquoise.

Its got three-quarter length sleeves with slits at the cuffs and the most gorgeous pearly buttons which are hard to catch on camera.

This is the outfit I'm linking to Patti's Visible Monday  and Mica's Weekday Wear Linkup this week, although I was sorely tempted to link Abby!