As the weather continued to play nicely, we were determined to make the most of these probably short-lived days.

I had a mid-week holiday two weeks ago, courtesy of a general strike here in Belgium. As public transport would be erratic that day, I decided not to take any chances and take the day off.

Jos was in need of some new pairs of trousers and, as the menswear rails in the charity shops are generally pretty dire, I took him retail shopping. Being mid-week, we had the shop virtually to ourselves, and I managed to persuade him to not only buy three well-needed pairs of trousers, but two snazzy shirts and a belt on top. Result! 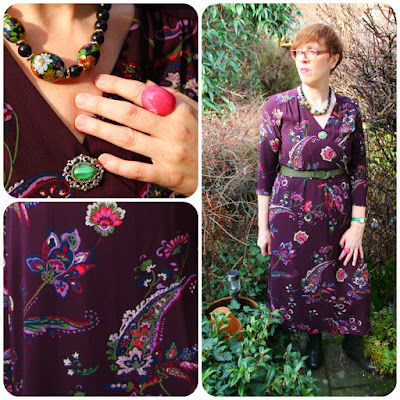 It was in no way intentional, but I was wearing retail myself that day. I'm talking about this gorgeous plum coloured midi dress, which I grabbed in the sales back in January.

It came with a tie belt but, being me, I replaced it with a moss green belt from my collection, while I pinned a brooch with a green centre to its crossover neckline. 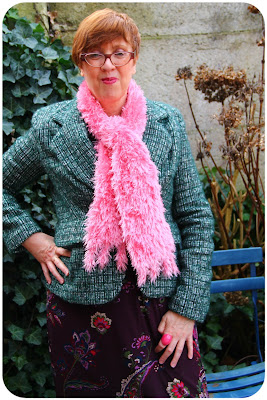 I wore the dress again for work later than week, when I replaced the Tweed jacket with one of my favourites, my vintage green wool, fur-collared jacket.

My lunch break was spent having coffee with my friend Inez, after which I accompanied her to a shoe shop where she tried on and ultimately bought a pair of pink trainers.

Meanwhile, I decided to take a nap on one of the shop's generously proportioned shoe fitting stools. 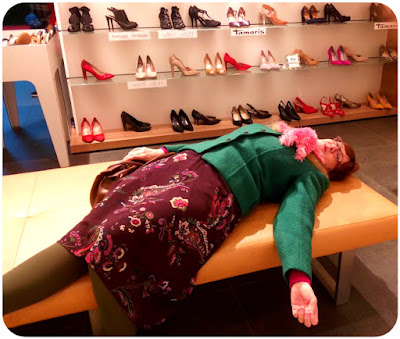 Skipping Saturday, when we went to the flea market which I already told you in my last post, I'm swiftly moving on to Sunday.

It was another gloriously sunny day which had all the characteristics of an early Spring day. 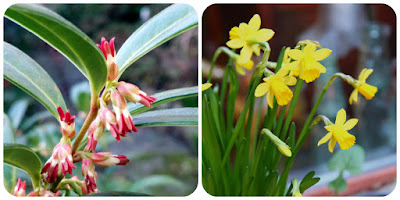 One by one, the little daffodils which have been overwintering in our window box are opening their frilly trumpeted flowers while, right outside our backdoor, the diminutive Sarcococca flowers are seducing us with their heavenly scent.

Feeling a bit lazy-limbed, we decided against a longer walk, opting for a short stroll in the park instead. 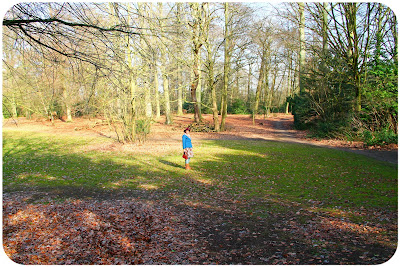 The park in question is in a neighbouring village and used to be the garden belonging to a manor house, its landscaping inspired by Capability Brown.

Teal and brown were the main colours of my outfit, but the rich burgundy of my handbag and the deep aubergine of my hat provided additional pops of colour. 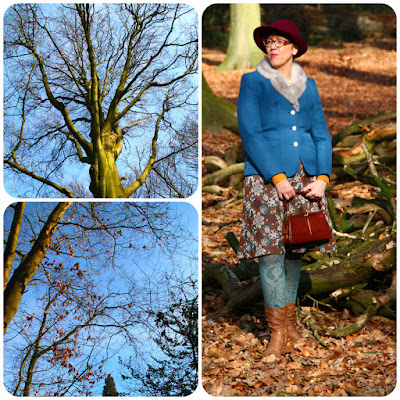 The air was rich with the fragrance of the sun-warmed layer of decaying leaves and soil, and invisible birds of various plumage could be heard rehearsing their Spring calls in the towering trees. 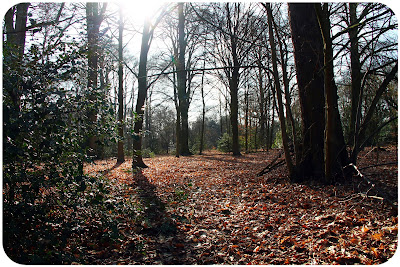 There's an old ice house with a gazebo on top, which can be reached by a narrow winding path which spirals around the mound containing the ice house, which is partly hidden behind an insulating barrier of yew hedges.

When we were last here, back in November, the thicket of yew was so dense that we could hardly make out the gazebo, which we happened upon by chance. 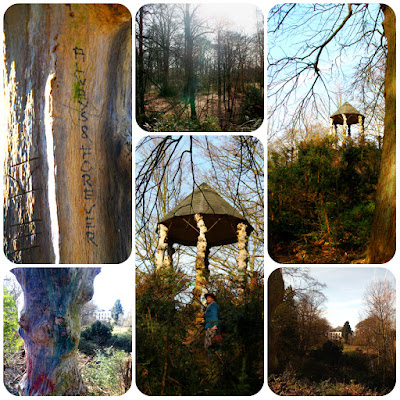 Reminding me of Sleeping Beauty's castle, it could have been the castle's last vestige before being swallowed by briar and bramble.

Even if the park isn't that large, we couldn't remember its exact location until, rounding a corner, Jos suddenly spotted the gazebo on its little knoll. 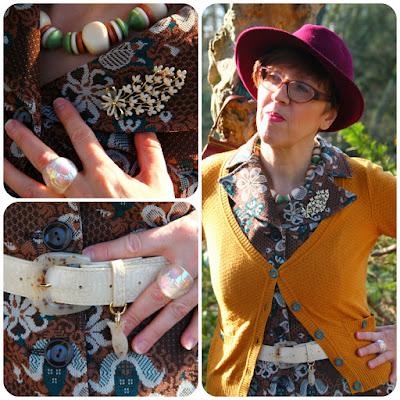 Climbing to the top, we had a bird's eye view of the park, with the white stuccoed manor house in the distance. This has been much modernized and turned into a hotel, losing much of its charm in the process.

The gazebo's gnarled and graffitied pillars were a whimsical backdrop for more outfit photos.

It was warm enough to briefly peel off layers, making use of one of the pillar's knobbly ridges to hang up my coat and subsequently my mustard coloured cardie with its teal buttons. 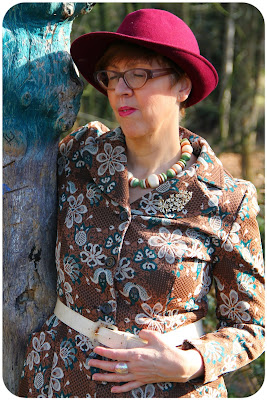 The Crimplene dress I'm wearing underneath made its first appearance here on my blog in one of my very first posts.

I wore it on a day which could almost have been a carbon copy of today's, if it weren't for the fact that it was the middle of March instead of the middle of February.

At my waist, a cream textured belt featuring a tiny dangling fish. The belt was was charity shopped, while both the beaded necklace and the brooch I pinned to my collar were flea market finds. The latter came from Carmarthen Flea Market, which we visited back in June 2015.

You might have noticed my pearly plastic ring? It actually started life as a green one, but one day the flimsy green upper layer started peeling off. Rather than binning it, I decided to finish the job and remove the layer completely, leaving a gorgeous pearly finish. 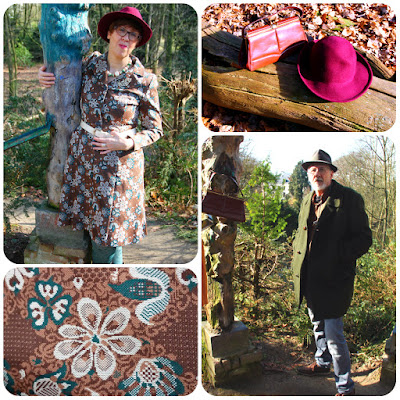 Birdsong continued to accompany us on our return walk.

Sitting down on a makeshift bench kindly provided by Mother Nature, we took time to stand, or rather, sit and stare, while soaking up the energizing rays of the sun. 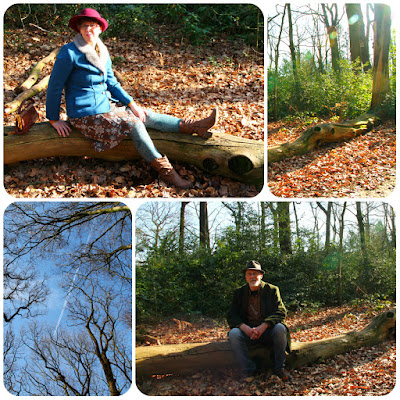 And everywhere is the promise of new growth: of fresh green shoots and leaves and pussy willows.

Soon the barren soil will burst with Spring flowers, and carpets of delicate Crocuses, hoop-skirted Winter Aconites and gently nodding daffodils will appear as if out of nowhere. 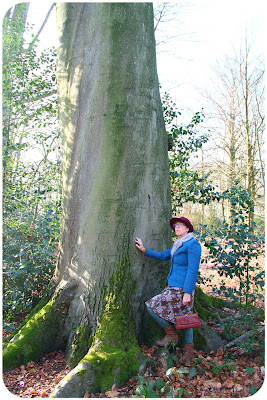 This gentle giant of a tree knows this circle of life is as ancient as time itself, a mute witness to the changing seasons, year after year. Always and forever.

I'll be joining Jacqui's Chic and Stylish linkup this week.