The weather has been behaving atrociously for the last couple of weeks and those interminable miserably grey, non-stop rainy days almost made me go out of my mind. Added to that, the fact that I've been all alone in the office and only had myself to talk to was enough to drive me up the wall!

A welcome little ray of sunshine appeared on Tuesday last week, with the arrival of a parcel from the lovely Gisela at Miss Magpie's Musings.

She'd bought two dresses at a vintage fair in Bath, but as alas they didn't fit her, she kindly send them to me! 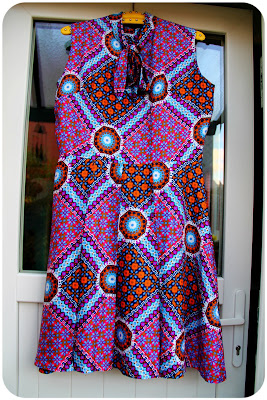 First up is this colourful Arnel pussy bow frock. As it's sleeveless it will be put aside for the warmer months, unless I come up with a suitable jumper to wear underneath. Watch this space!

There was a sparkly Scottie dog brooch too! 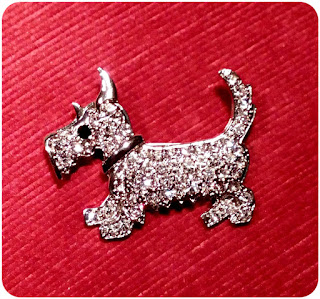 I wore the other dress on Saturday. It is handmade and fully lined, with the lining cleverly sewn in, and with its batwing sleeves - a first in my wardrobe - it seems to have come straight from the 1980s. 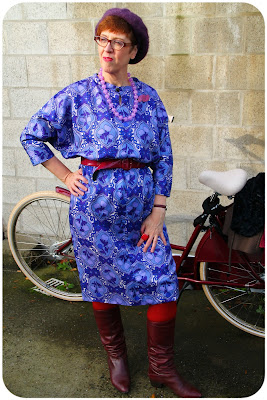 I remember having a grey batwing sweater dress back in the day, complete with the ubiquitous shoulder-pads of the era, which I wore to death, accessorized with a massive red belt. It's hard to believe now that this was my only dress!

The dress was somewhat similar to the white one shown below, tapering towards the hem, but the belt was more structured, and with an angled buckle. 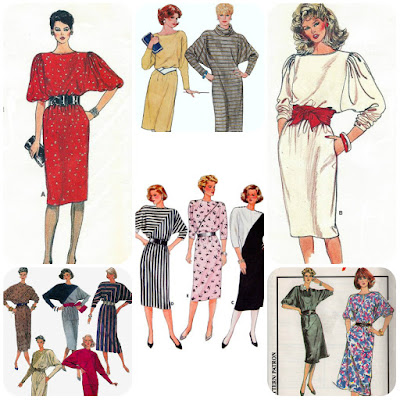 I was in my twenties in the eighties, and they were turbulant times.

In no particular order, I left home, lived in semi-squalor, was on the dole, found a job, did some serious growing up and kind of lost my way a bit both at the start and the end of the decade.


It was a happy, carefree and crazy time, but kind of bittersweet too, if only because with hindsight I know I wasn't always happy in my own skin and frightfully insecure.

For a couple of years in the early 1980s, I lived on the second floor of a house in the north of Antwerp, built in 1912, up four flights of creaking stairs. The house (the first one in the photo) hadn't moved with the times, with cracked linoleum, the most basic of mod cons and an old-fashioned coal stove by way of heating.

It was at the dead-end of a dead-end street backing onto a railway embankment, and I remember the chugging of pass-by-night freight trains lulling me to sleep. 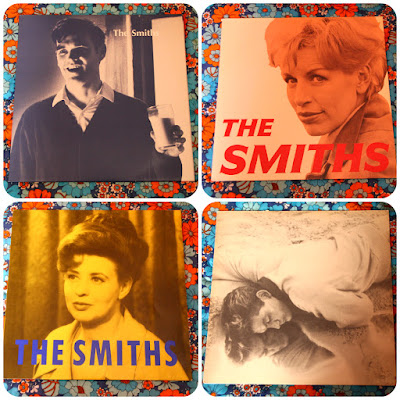 By day, the soundtrack was mostly provided by The Smiths and almost all the memories I have of that time have a Smiths song playing in the background.

But I digress. Isn't it amazing that a whole chunk of the past can be conjured up just by wearing a particular dress? 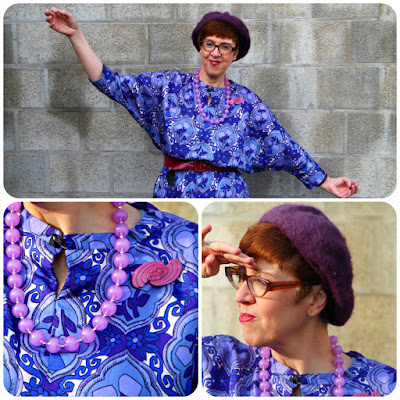 I had a whale of a time accessorizing the dress and added a burgundy belt, tights from the market stall in rusty red, lilac beads and a purple beret. The brooch I chose was an early plastic one in dusky pink, which I think went rather well with the vibe of the dress. 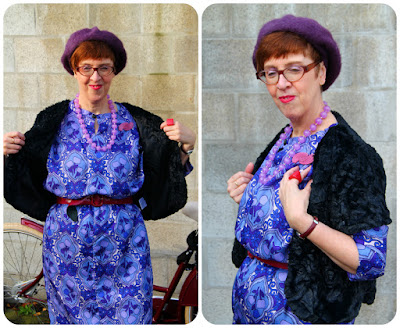 Due to the massive sleeves, a fake fur cap-sleeved vest was a better option than a cardigan. This offered the opportunity for another brooch, featuring tiny embroidered flowers in an oval frame. 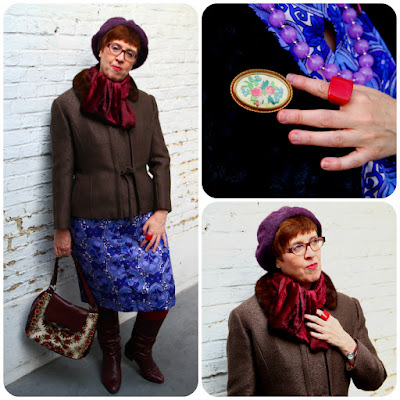 On top went my brown fake fur collared jacket, which is going into its third season, and I added a burgundy crushed velvet scarf. 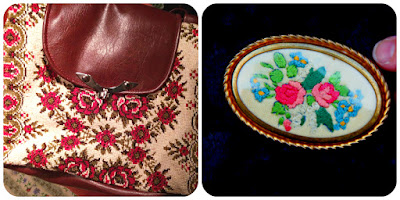 Oh, I forgot one accessory. Let me introduce you to my new bicycle! In burgundy, to complement my outfit. 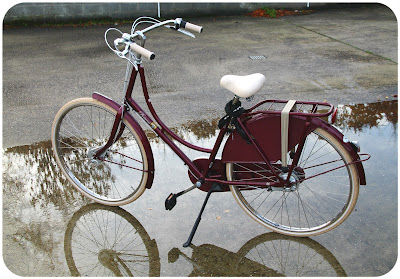 It was mostly paid for by Ecocheques, which are a kind of vouchers most employees get here in Belgium every year. With these vouchers, you can purchase energy saving devices and all kinds of environmentally friendly stuff.

Yes, you can buy stuff at the charity shops too, but it's far more satisfying to spend it on one, more expensive, piece.

As my old bike was rusty beyond belief, I opted for a new, old-fashioned style, one. 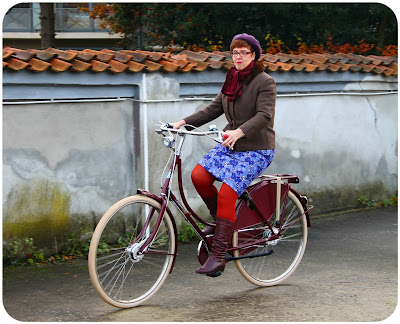 Now, my dress might be a similar design to the sweater dress I had in the 1980s, but with one big difference: the material isn't stretchy at all, so the dress's tapered shape felt a bit restricted when riding a bike.

But I did it, even if it was just for a test ride around the block.

And to show it off on my blog, obviously!

For those who are interested, thanks to Fiona, who kindly alerted me to its absence, I now have a Followers button on my blog! Not being very tech adept, it's a miracle that my blog ever made in online at all!

Feet firmly back in the here and now, I will tell you all about last weekend's finds in my next post.