In the grey of December

It was to a grey and foggy world that we woke up last Saturday, but at least it was dry after the endless rain of the week before.

We were raring to go out and have a taste of fresh air before the rain clouds would once again descend on us.

The aforementioned fresh air turned out to be quite chilly, nipping at any uncovered extremities, so we wrapped up warmly, giving me the chance to wear my latest € 4 winter coat. 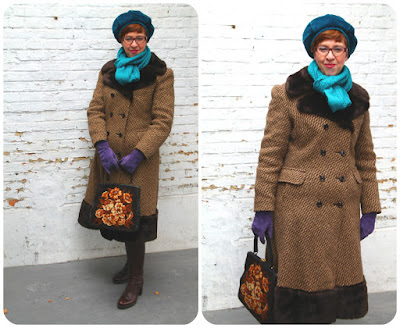 This coat is such a pleasure to wear, being warm but not too heavy as some woollen winter coats tend to be. The furry collar and especially the generous amount of fur at the hem, make me feel quite glamorous.

The extremities were covered by a teal velvet hat (slightly too large, I should have added a headband to secure it more firmly over my ears) and a pair of purple suede gloves. I added a turquoise knitted scarf for extra warmth.

My choice of handbag was a dark chocolate brown tapestry one with a floral motif. 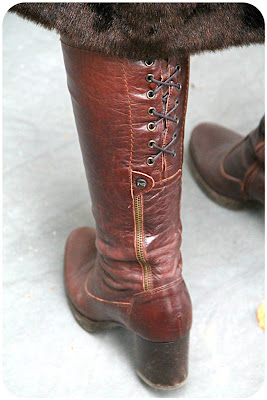 These boots are good quality leather ones charity shopped a few weeks ago. I've just realized I completely forgot to show them to you, so here they are.

They close with a side zipper, although the laces at the back can be adjusted if necesssary. 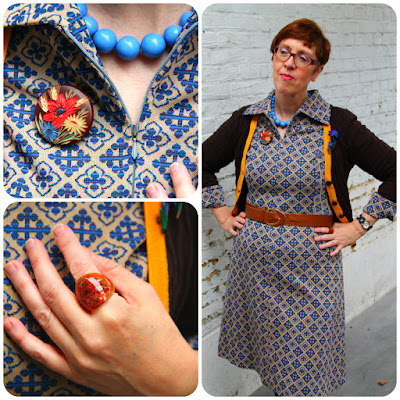 Let me show you what I'm wearing underneath!

The dress's fabric is a heavy polyester, and it has a front zipper and wide turned up cuffs.

I broke up the pattern with a caramel coloured belt and a vintage plastic brooch carved with flowers in blue, red and ivory. The beads echo the blue of the dress's pattern and I chose a plastic ring in a similar colour as the belt. 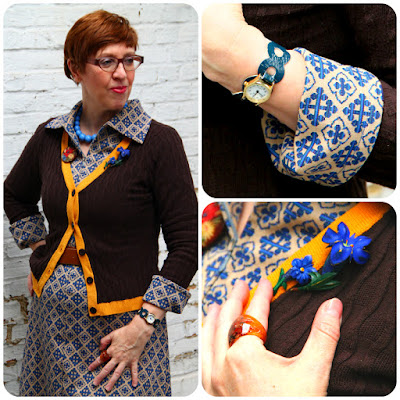 On top went a chocolate brown cardigan edged in yellow, contrasting perfectly with my two deep blue 1930s Gentian brooches. The large one came from our favourite indoor flea market while the small one was charity shopped for a pittance in Cardigan last summer. I just had to wear them together. 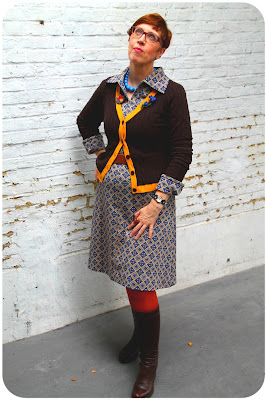 By the time we made it to the park the fog was retreating but the sky was still a dull uniform grey, the sun lacking the energy and motivation to break through the iron curtain of clouds. 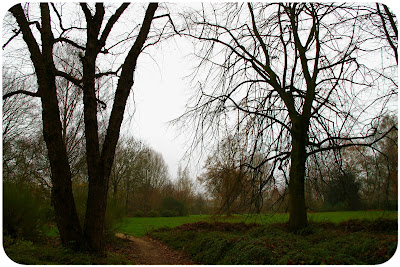 The edges of the park were blurred, the trees veiled in a light haze, the gnarled bark of their trunks a sombre brown. 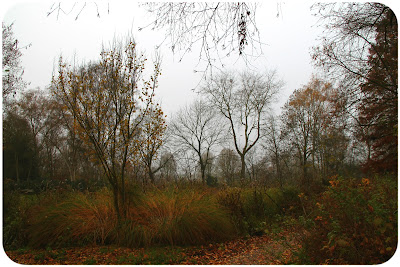 It was a typically gloomy December day on which it is quite clear that, although not yet officially Winter, nature has outgrown its Autumn mellowness. 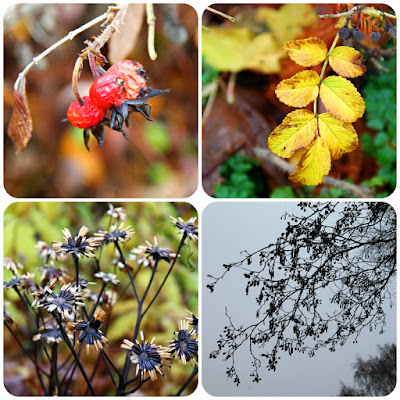 The relentless rain has made a soggy mess of the remains of the once abundant herbaceous border surrounding the park's pond. 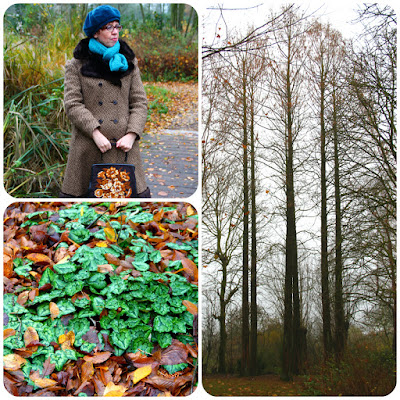 The delicate Cyclamen have finished flowering, leaving patches of patterned leaves in their wake, a welcome oasis of green amid the endless carpet of sodden brown leaves. 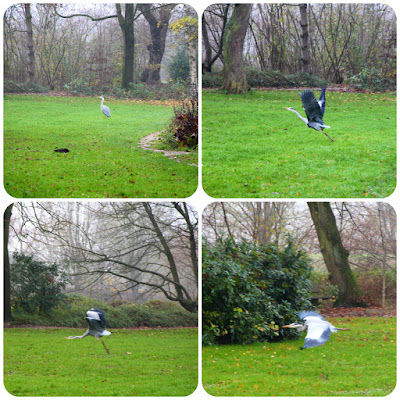 We spotted the tall, leggy figure of a heron, that most majestic of birds, almost pre-historic in appearance.

When I tried to tiptoe closer, it took flight: wings flapping and with its legs dangling, it was airborne.

I've read that the heron often keeps its neck extended when taking flight, but once in level flight coils it back in typical heron fashion, which to my surprise I caught on camera! 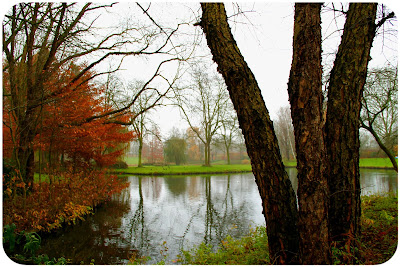 It is where Taxodium distichum, the bald cypress, grows. 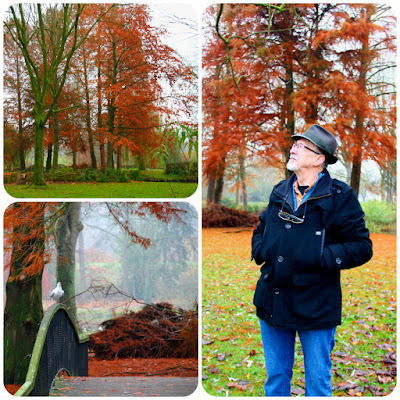 Deciduous, its feathery foliage turns this fiery colour in Autumn, then carpets the ground until it glows as if touched by a magic wand, creating an eerie world of colour, while all around seems to be leached of it. 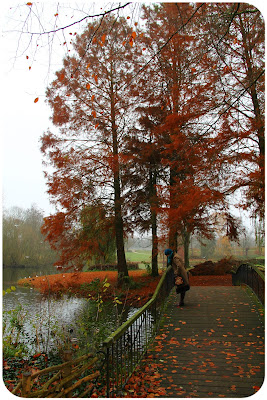 One has but to step onto the bridge to bring out the full population of the pond's waterfowl, including a handful of cleverly disguised gulls, in search of a handout. 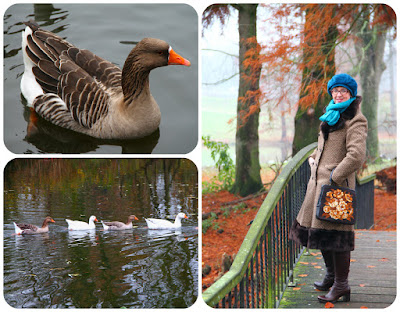 Unfortunately, we'd had our picnic in the car and ate everything to the last crumb, so they swam away disappointed, but in orderly fashion! 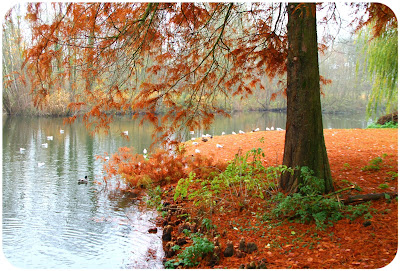 I'd taken off my gloves so that I could use my camera (making a mental note to put my pair of fingerless gloves in my handbag), so by now the cold was numbing my fingers and turning them stiff and clumsy. 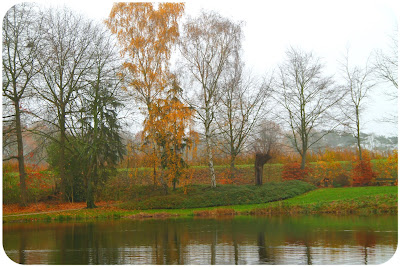 Stamping to keep warm, pulling our hats closer over our ears, it was time to return to our car and hit a couple of charity shops!

It was Saturday, after all ...

Linking once again to Patti's Visible Monday at Not Dead Yet Style!