Just the three of us

I'm breathing a sigh of relief now that Christmas has been done and dusted for another year, and we're back to some kind of normality.

Not that it wasn't enjoyable, mind you: it was spent just the way we wanted, relaxing and semi-hibernating inside Dove Cottage. 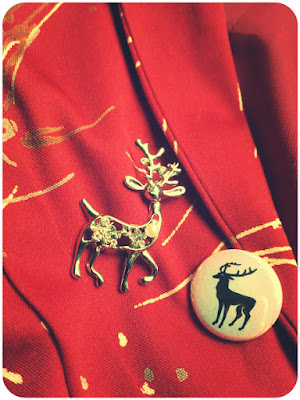 With the interminable grey weather persisting, we didn't even contemplate going outside for longer than strictly necessary. Nor did we need to, as we'd got in all our provisions on the Friday, in order to avoid the mad last minute rush. 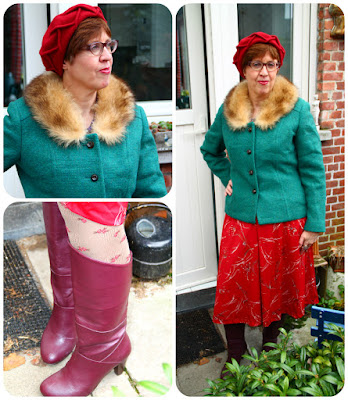 On the day of Christmas Eve, I briefly walked into town to get a loaf of bread.

In honour of the Season, I dressed in red and green. I topped my red vintage dress, bought at a flea market a couple of Summers ago, with the green fur-collared jacket I recently found at Think Twice.

You already know the red beret, which is fastly becoming a favourite, but the purple boots were charity shopped last Saturday. I added oat coloured tights sprinkled with rosebuds. 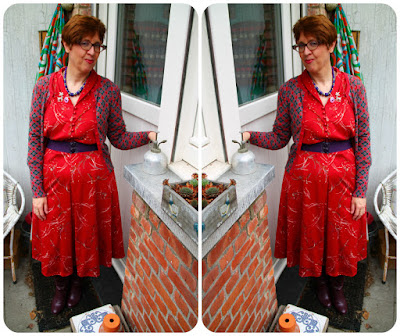 For some reason, people looked at me as if I was the ghost of Christmas past. Oh, I get it. I wasn't wearing a Christmas jumper or a Santa hat!

Oh, why does nobody bother to dress up anymore?

The dress, which is a tiny bit wide on top, was cinched in with a purple elastic belt, and I chose a purple necklace too. The charity shopped King Louie cardigan was thrown on at the last minute.


The final touches were my two Christmas brooches, as seen in this post's opening photo: a sparkly reindeer bought in a high street shop last year, and a reindeer pin designed by one of my old punk buddies now living in Berlin and trading under the name Henri Banks! 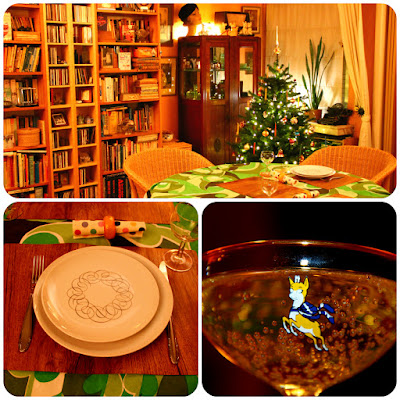 That night, we set the table with my parents' dinner service, and celebrated with just the two of us, starting off festivities as usual with non-alcoholic bubbly drank from Babycham glasses. 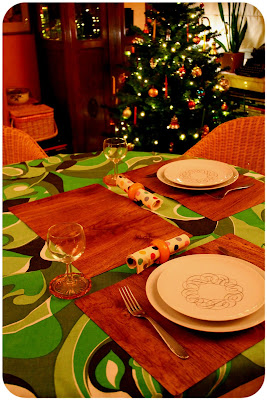 Scrap that, obviously I meant the three of us. Here's Phoebe showing who's boss! 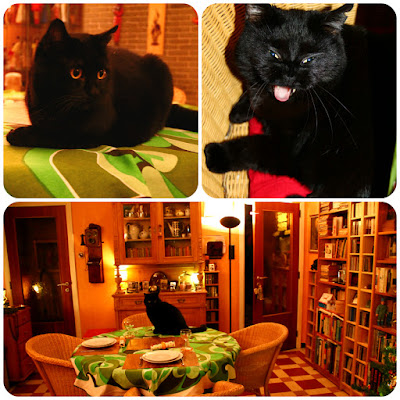 Although Christmas day itself wore a cloak of sombre grey, in our cosy little home everything was merry and bright. 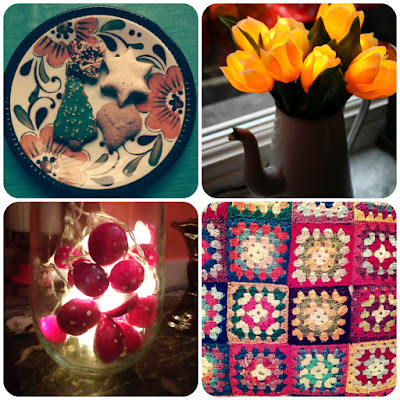 Once or twice, a pale ray of sunshine managed to pierce through the layer of clouds, so briefly, in fact, that you could easily have missed it if you didn't happen to be looking outside at that very moment. 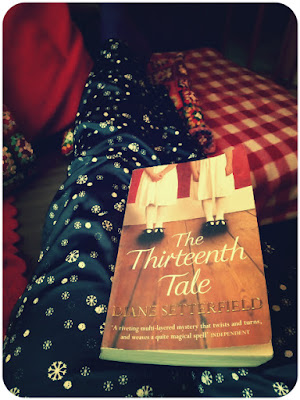 Perfect for lounging in our pyamas, curling up on the sofa with a good book.

This is a tradition of our own, started when we celebrated our first Christmas together, all of twenty three Christmases ago!

Soppy Christmas records are playing in the background, accompanied by much eye rolling and singing along out of tune with alternative, made-up, lyrics! 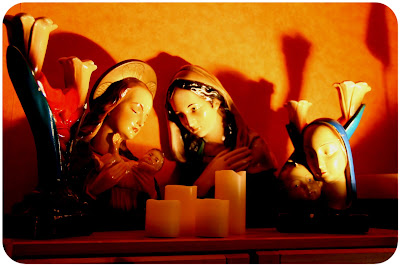 I'm not sure Dove Cottage's assortment of Marys approve!

Now if the weather had been a bit more accomodating, we would have dressed at some point and gone for a bracing walk. We would even have welcomed some snow, to be crunched through with snow booted feet and warm mittened hands.

But alas! When has Christmas ever been that Christmas card perfect in these parts, complete with robins on snow covered fences? Do they only exist in people's imagination or some half forgotten childhood memories? Are they ever fact rather than fiction? 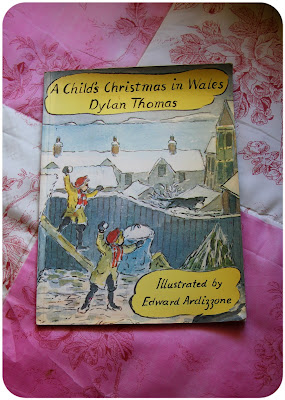 One Christmas was so much like another, in those years around the sea-town corner now and out of all sound except the distant speaking of the voices I sometimes hear a moment before sleep, that I can never remember whether it snowed for six days and six nights when I was twelve or whether it snowed for twelve days and twelve nights when I was six.
-Dylan Thomas, A Child's Christmas in Wales-

Looking through old photographs, as one is bound to do on such occasions, I came across these ones, taken in December 1969.

Quite a bit of snow to have produced such a large snowman, but a bit of googling revealed that there was no snow on Christmas day.

With that, I've counted and found that I mentioned the C word fourteen times in this post, so that'll definitely be it for another year!