Allow me to introduce you to one of my latest finds!

This macrame rope bag with bamboo handles and sturdy cotton lining is a souvenir from Madeira and was found during a quick dash to the charity shop on Friday last week.

Although probably meant as a beach bag, it's roomy enough for a day out involving a picnic, and with enough space to store any flea market or charity shop finds. 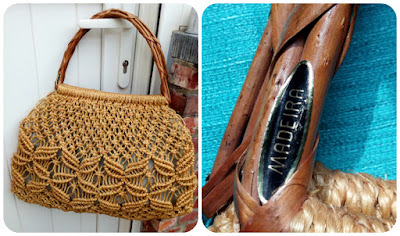 It came with us on Saturday before last, when we'd planned to go to a small flea market on the outskirts of the nearby town of Boom.

I was wearing pastel colours, by way of a Trevira dress in pale blue with textured diamonds in the palest of pinks. I love the self fabric belt with its fabric covered round buckle. 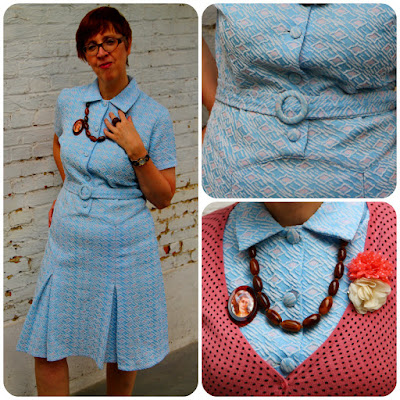 I played around with differently coloured cardies and eventually settled on this coral pink one sprinkled with black dots, and I piled on some contrasting accessories.

Although the sun was shining when we left the house, by the time we'd parked our car, menacingly dark, charcoal grey clouds heavy with rain had once again gathered, threatening to drench us any minute. Just our luck! 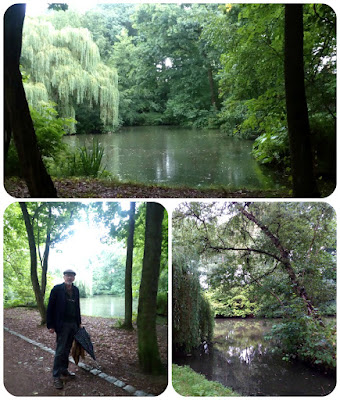 We had to cross the park to get to the flea market and were about half way when, sure enough, the heavens opened.We sheltered under the trees, watching the raindrops create a pattern of concentric circles in the park's pond.

Eventually it cleared up and we continued, although we shouldn't have bothered as there were many empty gaps where stalls should have been, and the only thing I found was a € 1 pair of shoes. 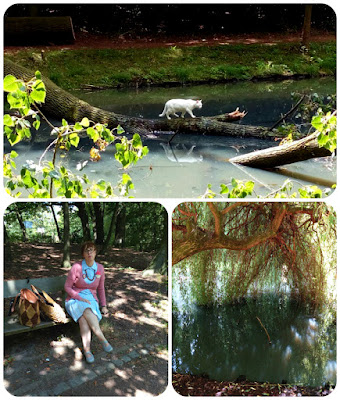 On our way back to the car, we came across an adventurous white cat, who was crossing the park's murky pond by way of a fallen tree trunk, which greatly alarmed a gaggle of moorhens which were sheltering among its branches.

We were itching to go on a proper walk on Sunday. The sun was out in full force and it would have been silly to stay inside.

So, off we went, taking the Madeira basket and a picnic. Our destination was the delightful Middelheim Park, which incorporates an open air museum of sculpture, and which I already blogged about before. Apart from the brooch, there was nothing vintage about my outfit for once.

Most of it was new to me, though. I bought the King Louie blouse for € 5,- in a charity shop, and you might recognize the yellow batwing cardie, originally from H&M, which I found a couple of weeks ago.

All the jewellery, except for the ring, was charity shopped too, and even my watch strap came from a flea market.

I've had the jeans jacket for ages, and it's a real staple of my summer wardrobe, but although it was originally from Mexx, this too was a charity shop find. 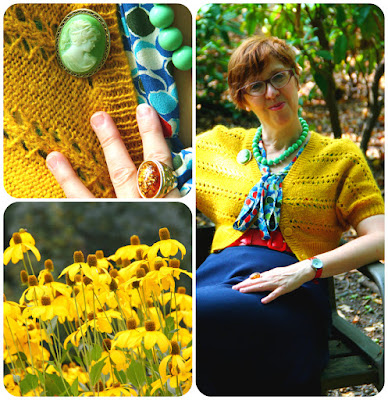 The navy skirt was bought in the sales several years back. Apparently it hadn't been very popular as there was a whole rack of them left, which kept being reduced in price. I snapped mine up at € 10, and liked it so much that I went back and bought a second one as well as one in green. Both had been reduced to € 7 by then! 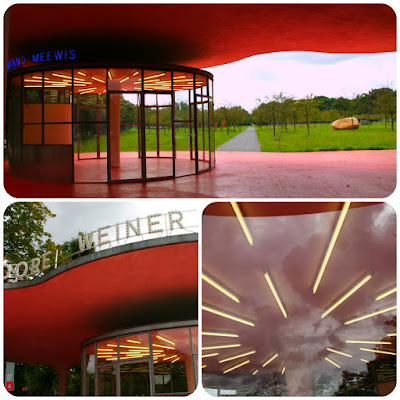 While on our way to the park, the sun once again disappeared on us, but we added an umbrella to the Madeira bag's contents and made a go of it.

In fact, the blanket of moody grey clouds, through which the sun tried to pierce from time to time, made for perfect photographic conditions.

We took a different entrance than usual: this one is actually a work of art called Artiesteningang (Artists' Entrance). It was created by Dutch artist John Körmeling, who managed to make the structure look both futuristic and retro. The names of some of the artists whose work is represented in the museum are incorporated in the canopy. 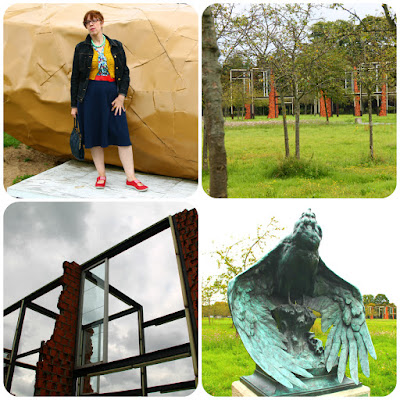 We then continued past what looked like a ruined building, but is actually also a work of art.

It is called The Passage of the Hours, and is by Portuguese artist Pedro Cabrita Reis, who used steel, brick, glass and fluorescent lamps in this construction measuring 8 x 8 x 24 metres.

The work, which inhabits the border between architecture and art refers simultaneously to a historic ruin and a recent remnant of a conflict. 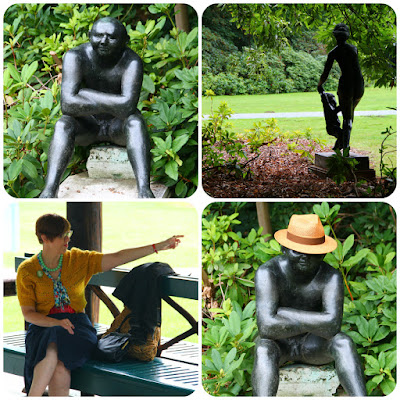 After entering the park itself, we kept away from the main paths, in order to avoid the crowds, as it was quite a busy day.

Jos took pity on this poor guy (top left) and offered him the use of his hat! 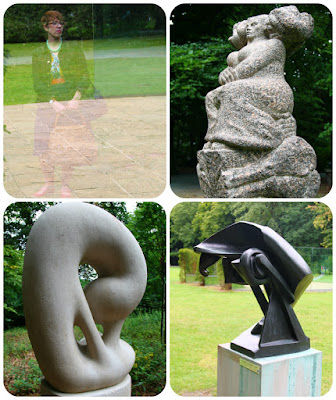 The spooky photo of me (top left) was taken inside another work of art, called Belgian Funhouse, by artist Dan Graham (USA), who creates outdoor pavilions containing  reflective plates of glass in which a viewer sees a reflection of himself and his environment.

By 1 o'clock we were getting hungry and looked for the perfect picnic place, which we found off a barely used path close to the water's edge. 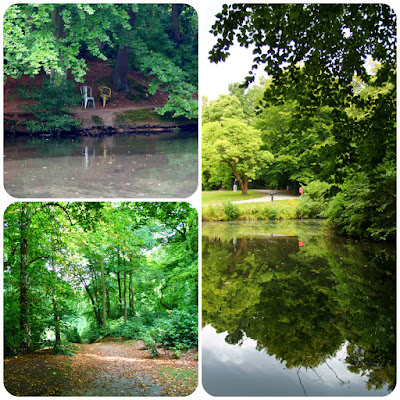 Here, we had a view of the lake, with the open parkland beyond. Seating came in the form of gold and silver painted chairs, which can be found all over the park for people to use and enjoy the sculptures at leisure.

As usual, we gravitated towards the utterly fabulous Braem Pavilion, designed by Belgian architect Renaat Braem (1910-2001), a former apprentice of Le Corbusier, and inaugurated in 1971.

The flying saucer in front of it (bottom right) is by legendary Belgian artist Panamarenko. 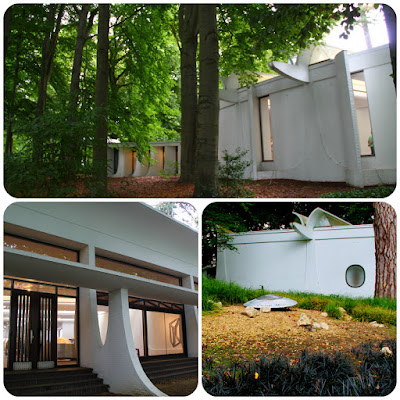 We had a look at some of the works by Welsh artist Richard Deacon, who has a solo exhibition, called Some Time, running from May until September. 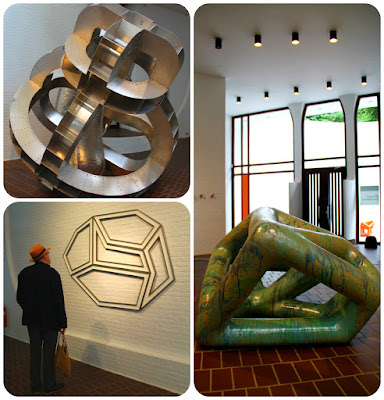 The works exhibited inside the Braem Pavilion include, clockwise from top left, Body of Thought # 2, Like You Know and Alphabet Y.

The exhibition is made up of some 31 works, both monumental works and smaller pieces, which apart from the Braem Pavillion, are on display in different parts of the museum park. 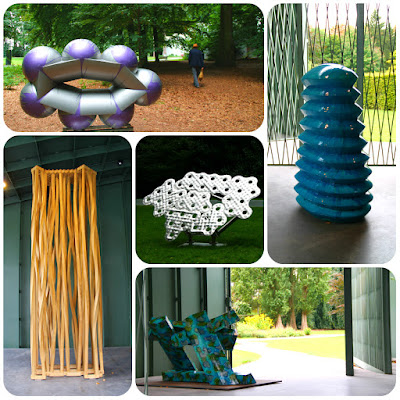 I'm always intrigued by the names of works of art, which I think are an integral part of them, and I'm always let down when one turns out to be untitled. 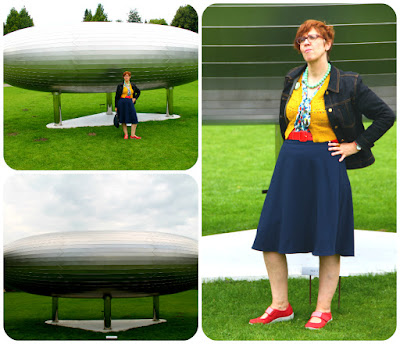 This sculpture, called Never Mind, is central to the exhibition. It is a key piece from the museum collection and was acquired in 1993. Originally coated in wooden strips, it has been restored and re-coated in stainless steel strips especially for this exhibition.

There were two girls doing a photo session in front of it, so we had to wait our turn and, as lots of people were milling around the sculpture, there was the added difficulty of trying to capture it without people's legs peeping out from under it. 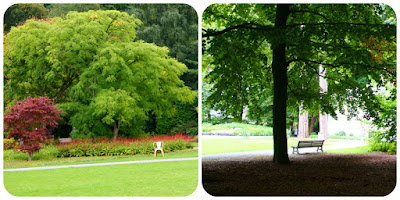 We finished our visit by sitting on a bench contemplating nature's slow but sure transition into Autumn.

Linking up with Patti's Visible Monday at Not Dead Yet Style.