After Mr. S. and Phoebe, my wardrobe is the love of my life, but still there are mornings I am stood in front of my full to bursting wardrobe not knowing what to wear.

I blame this on circumstances beyond my control, such as the weather. Mainly the weather.

The main culprit, of course, is that I've got so much choice, and so little time to wear it all. 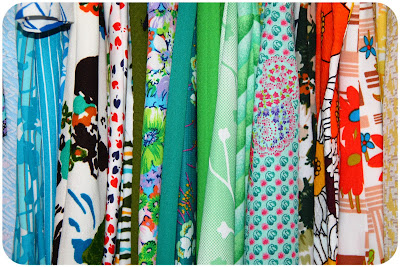 This is especially true in Summer, let's say from May to early October (if we're lucky). One way or another, the summer season, as in warm enough to wear frivolous summer frocks, is far too short. We can fake it a little, by wearing tights and a cardigan (both of which I therefore have in abundance) but all too soon the day will come when the summer stuff has to be put away in favour of one's winter wardrobe.

So, there is no time to lose as, even in the best circumstances there will still be lots of unworn stuff by the end of Summer.

I am making a concentrated effort to wear those things which haven't been worn for a while. These can be things I'm not or no longer sure are me or that for one reason or another have slightly gone out of favour. I think I owe them at least another wear before making any drastic decisions. 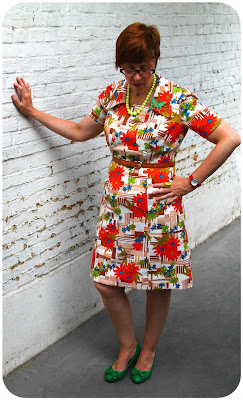 Take this Diolen dress, picked up at the much missed Blender Vintage Shop a couple of years ago. I like the print, its cut and especially its collar. But it is lined, making it too thick for a hot day, and I think it's a tiny bit too short on me. 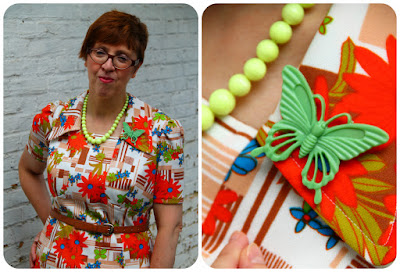 Out it came anyway, on Saturday before last, and at first I was sure it would be a goner. I added a belt: better.  A butterfly brooch on the collar, to keep the flowers company. A lime green necklace and ditto ring: not too bad. Still, I wasn't totally convinced ... 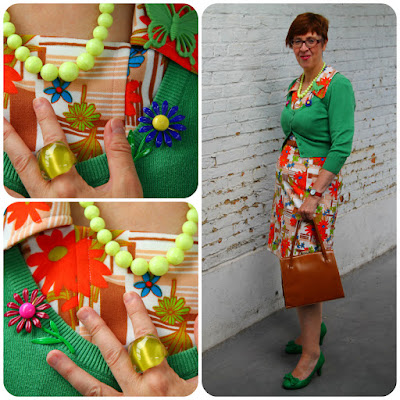 It was too chilly outside to go it alone,  so I needed to add a cardie. As the dress is rather short, none of my cardigans looked right, and believe me: I tried a lot of them. Then I pulled this green cropped cardigan out of the wardrobe, charity shopped and completely forgotten about. Problem solved!  I added not one but two flower brooches which seem to grow naturally along the cardie's neckline. My favourite green shoes and a tan handbag bought in Wales, and I was ready for some charity shopping. What else?

Wonder if the charity shop gods were good to us again? 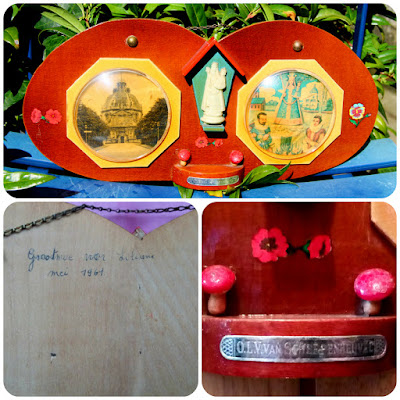 This kitschy souvenir is from Scherpenheuvel, a famous Belgian place of pilgrimage, which we visited last November. Someone has written the date on the back, May 1961, and it says it was a gift from a grandmother to someone called Liliane. I find such things quite poignant and cannot help but embroider some story, ending with the sad fact that in all probability Liliane isn't around anymore and that her relatives saw no worth in keeping in what essentially is just a piece of varnished and decorated plywood. 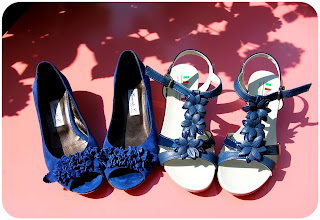 I also found two pairs of blue shoes, a pair of peep-toes and a pair of sandals. As lately I'd been lamenting the lack of decent blue shoes, they were lucky finds, really!

Then there were these two bags. 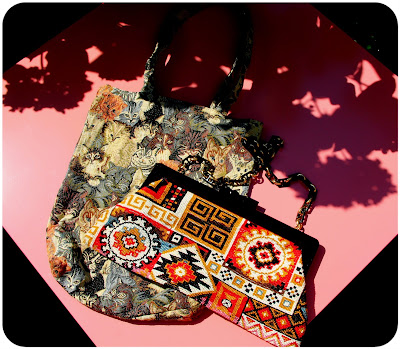 Other buys were a yellow batwing cardigan, originally from H&M, and two belts. 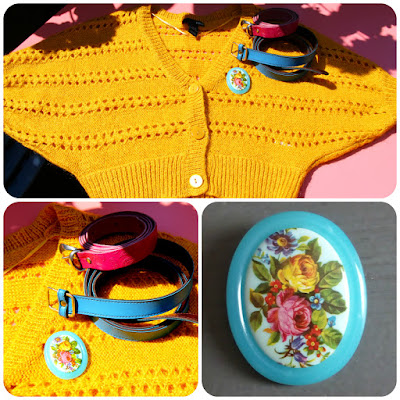 While we were queuing at the till, I spotted this gorgeous plastic vintage brooch among a jumble of stuff in a display case.

On our way home, we passed the Art Deco water tower which is a favourite place for a picnic. We had the place to ourselves and sat enjoying our sandwiches and a cup of coffee in the sunshine, which had briefly appeared out of nowhere. While I was taking photographs, I saw dark clouds gathering in the distance. Minutes later, we had to flee to our car, dodging the first drops of rain. 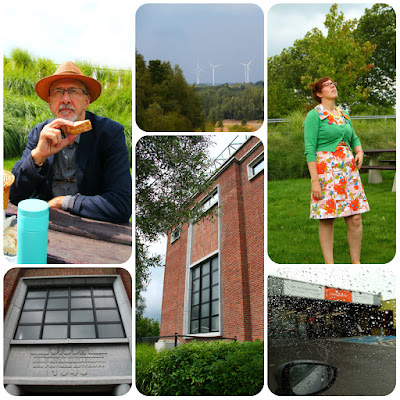 We even had to wait out the worst of it in the car, while parked in front of our second charity shop of the day. A wasted trip, I should add, as there was nothing remotely interesting to be found.

Summer returned briefly on Sunday and what's more, we had a flea market to go to.

After some deliberation, I chose this dress, which came from Vintage Styling, another shop that is no more. It is, in effect, a black dress with a print, but the flower pattern, in reds and pinks, is so abundant that I tend to forget the black. It's got a tie as well as a self fabric belt, and it's one of those frocks I feel totally at ease in. 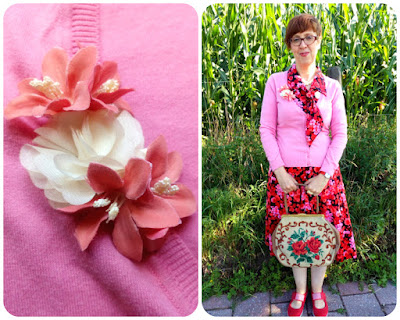 To start with, I was wearing a pink cardigan but it soon became too hot for it. I got my sunglasses with me, but wasn't wearing a hat, whereas Jos was wearing a hat but had left his sunglasses behind in the car, so that the first purchases we made were of a practical nature. 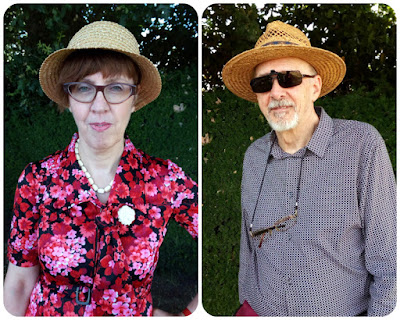 This simple straw hat served its purpose and can always be jazzed up with one of my flower hairbands.

Jos's solution was buying clip-on sunglasses, which were buy one, get one free.

In spite of a profusion of stalls, pickings were meagre, with stall after stall selling toys, children's clothes and retired household goods, so that we were more than bored by the time we reached the end. 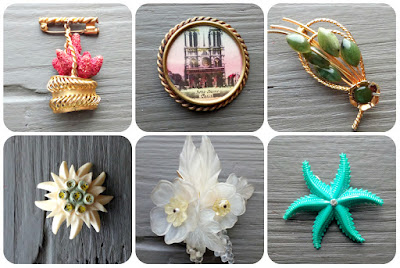 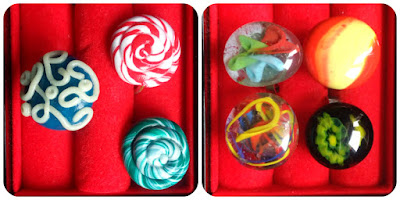 To combat the feeling of defeat brought on by the uninspiring market, we finished the day by going for a little walk. 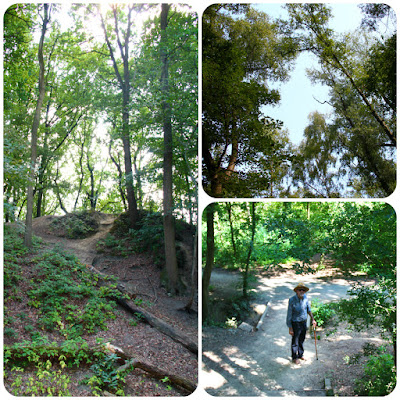 Nothing too strenuous, as my knee is still playing up. I really shouldn't have climbed up there ... 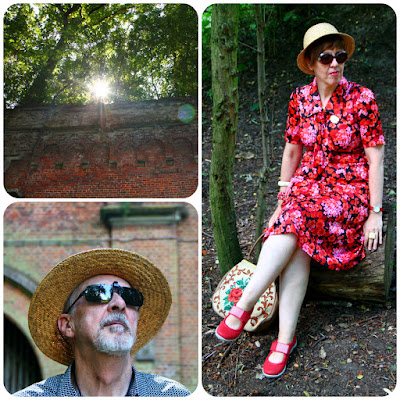 It's a good thing there were some conveniently placed tree stumps to rest the weary legs!