Living in a country like Belgium, a girl just cannot have enough raincoats.

At my last count, I had no less than five of them in my wardrobe.

There's the chocolate brown vintage one, bought on my first ever visit to Blender Vintage Shop back in October 2013.

It was a warm and sunny day, but I still insisted posing in it. The bag and gloves were bought at the same time. 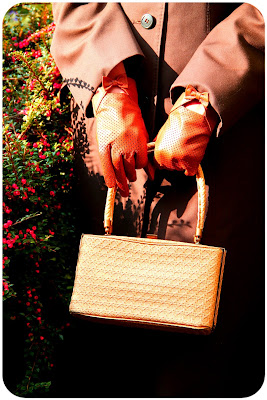 Next up is a pale beige vintage trench, which I picked up in a charity shop. I don't wear it often, as it makes me feel a bit washed out, but it's such a classic!

It was only after I'd worn it a couple of times that I noticed that the buttons on the cuff and shoulder straps are beige, while all the others are green! 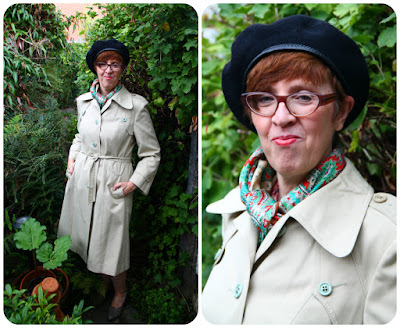 Although there are many examples of glamorous ladies wearing a similar trench coat (Marlene Dietrich, Jackie O, Catherine Deneuve, to name but a few), the one which instantly pops into my mind - and I will say this only once! - is 'Allo 'Allo's Michelle Dubois! 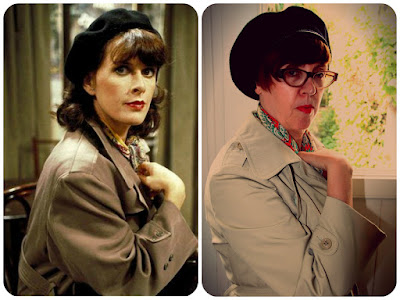 Oh well, I guess I'll unearth my black beret then!

Both the chocolate brown and the beige coats are made from Tergal fabric and have a Rainsafe label, a brand I could unfortunately find little or no information about. 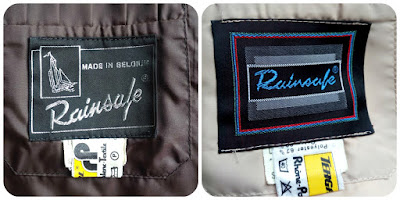 I've got a short green raincoat one as well, also charity shopped, but new-to-me rather than vintage. You've already seen me in it, as it's the one I'm always taking to Wales to wear with my jeans. 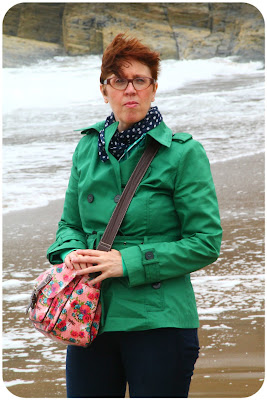 It was at Think Twice that I found this vintage raincoat, in an almost pinkish beige sprinkled with tiny white polka dots. 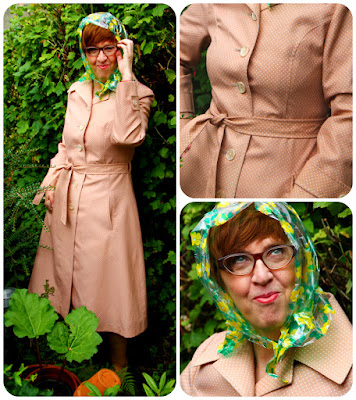 Although I have no idea of its age, I think it's quite 1950s in shape. 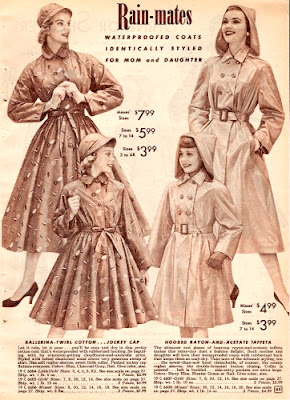 Posing in the rain presented the perfect opportunity to break out one of my vintage rain bonnets.

They came in these cute little doll-sized suitcases and treasure chests, which I came across at a flea market last Autumn. Obviously, I had to buy them in all available colours! 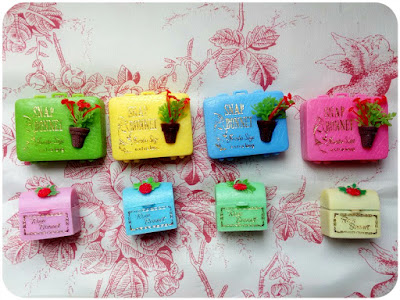 Having been packed tightly inside one of the little suitcases since the 1960s, it wasn't easy to unfold the bonnet itself, as the plastic was sticking together. And surely, one little gust of wind would dislodge it, as it didn't fit snugly at all.

I remember my Mum making me wear a rain bonnet on several occasions, which I absolutely hated. 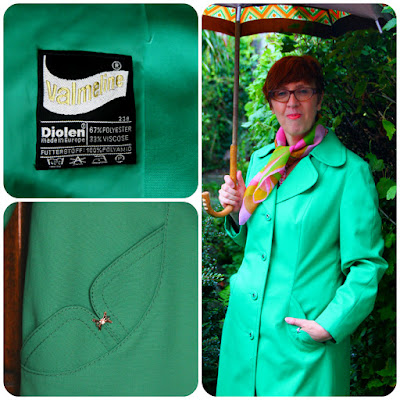 Then, earlier this year, I came across the raincoat of my dreams, a deadstock 1960s one, in exactly the right shade of green I'd been looking for.

The green is a very hard shade to photograph, and in the photos taken outside it turns out much lighter than it actually is. The actual shade is more like that of the green coat in the vintage pattern below. 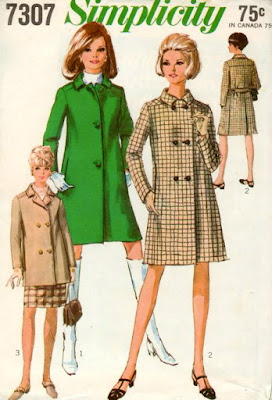 The only problem is that it is just a tiny bit too wide, which you can't see in the photo, as I'd nipped in the half belt at the back with a clothes peg. I'm trying to find a more permanent way of taking it in, preferably one I can do myself. 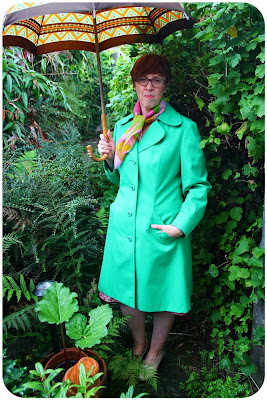 A couple of weeks ago, I was sat at my desk in the office, when it started raining heavily, with wind-driven raindrops splattering the windows, Antwerp's main shopping street strangely deserted and generally looking as if the biblical deluge was imminent.

In other words, a typical summer's day in Belgium! 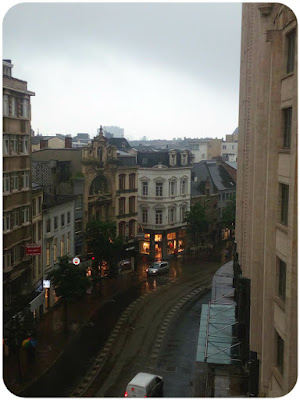 In spite of having that many raincoats to choose from, I'd left the house in a jeans jacket, having listened to the weather forecast and been assured that it would remain dry. Having come to my age, I should have known better!

Staying inside during lunch break was no option, as it was at the end of Think Twice's sales, when everything goes for the silly price of € 1. It is surprising what can be picked up on such a day, if you are prepared to wade through mountains of tangled and often grubby stuff. 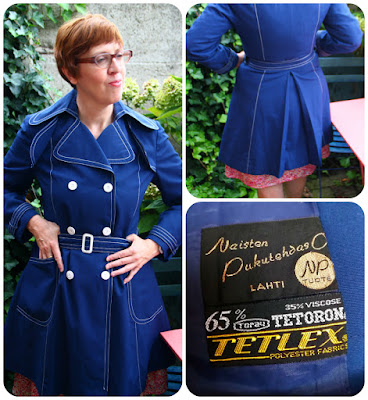 So, I clutched my umbrella and made a run for it ...

And there it was, beckoning me from among a jumble of shapeless and crumpled items: a royal blue raincoat, mid-length, trimmed with white stitching, with white buttons and belt buckle, and with a little split at the back. Serendipity! 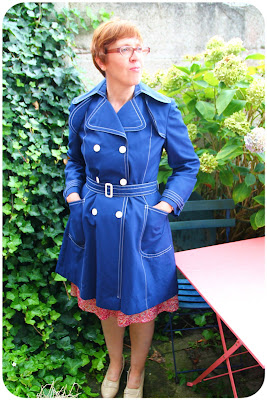 I wasted no time grabbing it and as I made my way to the till, having picked up a couple of other items along the way, I realized I had no idea what size it was, nor had I tried it on. At € 1,- I decided to take a gamble, but I needn't have worried as it fits like a glove!

Now there's a little demon at the back of my mind whispering I should have a red one as well ... 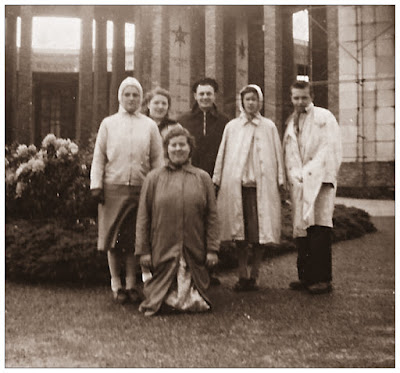 I am finishing this rainy post with a photo showing a group of friends back in the early 1950s, posing in the rain on a visit to Bouillon in Belgium.

My Mum and Dad are on the far right, both wearing beige raincoats, and I could swear my Mum is wearing a rain bonnet!

Linking up with Tina's Pink Friday!