A tale of two walks

We were at the end of the first week of our holiday by now, and the glorious weather of only a couple of days before seemed a long way off.

The sky on Sunday morning was still a dull grey, but it least it was dry, so we wasted no time in doing a walk which had been on our list for a long time. But first, let's have a look at what I was wearing. I dug one of my vintage tops out of my suitcase to compliment my hard-wearing dark denim trousers. It's got a pink, yellow, blue and green print on a white background, green pearly buttons and slightly puffy sleeves. Look at my hair flower, which compliments the roses scrambling up our cottage's walls!

For the walk itself, I added a green cardie, and later my boring Gore-Tex jacket as it was quite windy.

The start of the walk was just across the estuary, in Cardigan, and the walk itself would take us in a loop around and then down to St. Dogmaels, our village, and back. 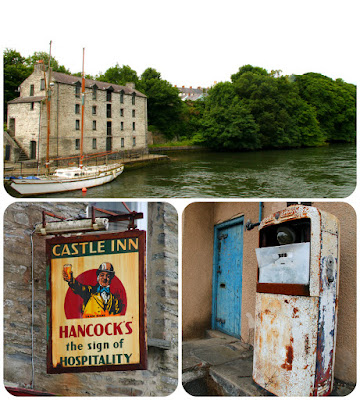 Right before veering off the main road to St. Dogmaels onto a bridle path, I took the opportunity to photograph a slightly rusty pub sign (the building it's attached to has been converted to housing, but I love it that they kept the sign!) and a derelict petrol pump we'd been passing each day on our way to and from the cottage. 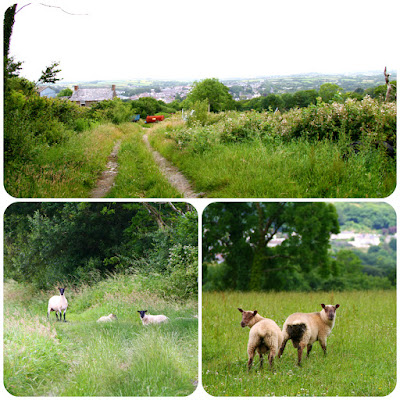 The bridle path took us to an abandoned farm where, after a slight diversion, we passed a flock of persistingly bleating sheep who were alarmed at the sight of us. Behind them, a panoramic view to the estuary and Poppit Sands opened up.

We could even spot our cottage's roof and chimney in the far distance. 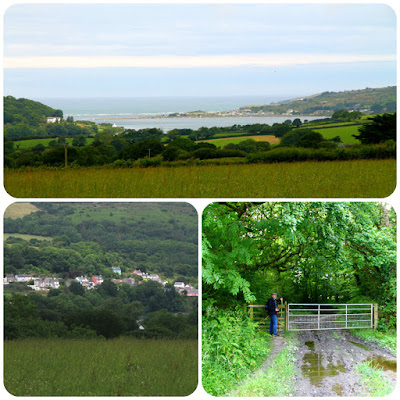 The path, which became muddy for a while, ended at a tarmacked lane leading into St. Dogmaels.

We were supposed to take another path leading off this lane, but as we were searching for it, we got talking to the owners of a lovely yellow painted house, the lady of which turned out to be Dutch. She directed us to a more scenic path, which ran enclosed between banks of trees, eventually ending up at Blaenwaun Baptist Chapel, which is where we were headed. 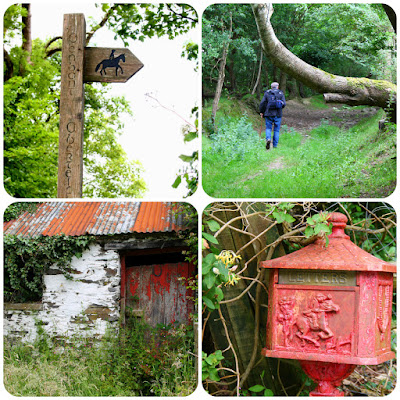 The chapel is a stark, forbidding looking building squatting in an overgrown churchyard, its graves entangled in brambles and adorned with wildflowers. It must be very bleak here in winter, the starkness of the chapel on top of the hill enough to put the fear of God into you. 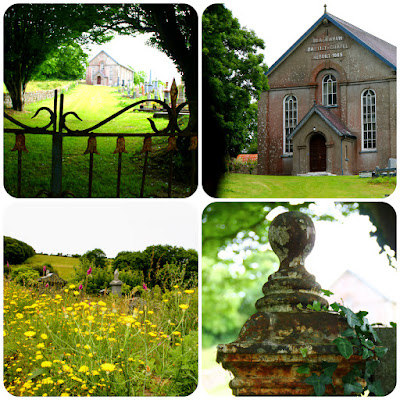 We continued on a quiet country lane and eventually ended up on a footpath running next to Cwm Degwel, a wooded ravine, to St. Dogmaels, where we had a cup of coffee at The Coach House, 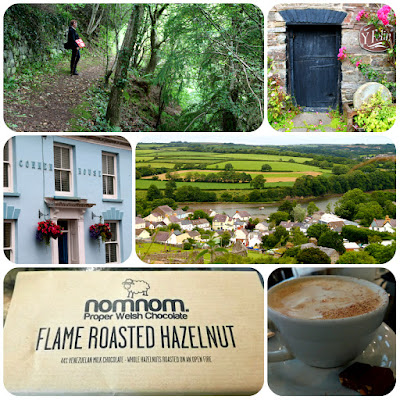 Fortified by a bar of delicious Welsh chocolate, we returned, by way of fields and stiles to Cardigan. 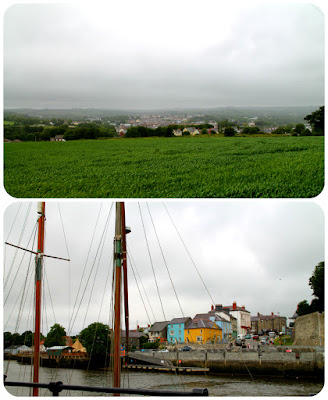 Much to our surprise, we got a bonus sunny day on Monday. We decided to strike the iron while it was hot, and tick off another walk on our list.

For this one, we had to drive all the way to Whitesands, near St. Davids, a large sandy beach with easy access to the Coast Path.

The walk up to St. Davids Head is a popular one and, in fact, we have attempted to do it before. It was on an equally sunny day, but soon after heading off we were surprised by a stubborn sea mist, forcing us to return before the walk was completed. 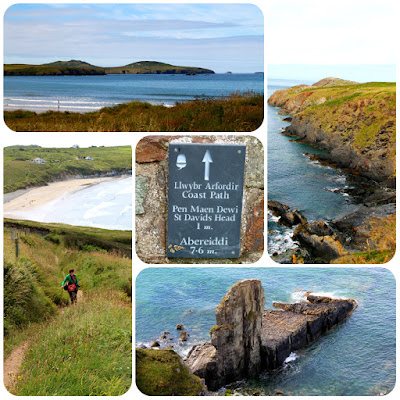 In contrast, now it was the clearest of days, with far reaching views across an island-dotted seascape.

With the sun slightly filtered by wisps of clouds, the light wasn't too harsh and therefore perfect for photographs.

The footpath runs up and down but remains close to the coast, passing the beach at Porth Lleuog separated from Whitesands Bay by the rocky promontory of Trwynhwrddyn. 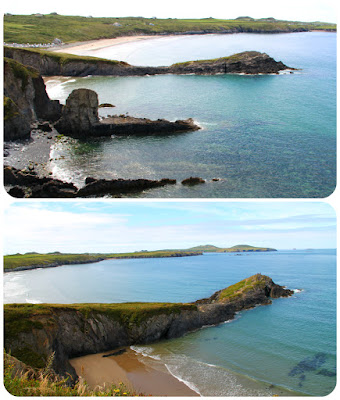 At the crest of a hill Coetan Arthur, a 4000-year-old Neolithic burial chamber, can be seen silhouetted against the sky. 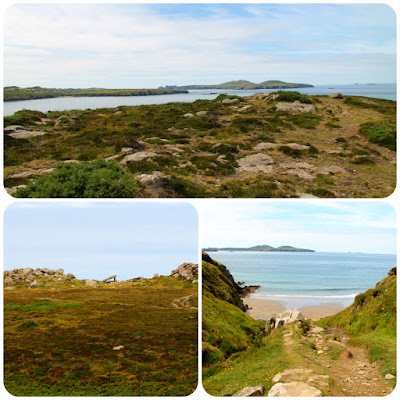 Then the path descends into a valley via broad steps to a spring above the tiny cove of Porth Melgan. 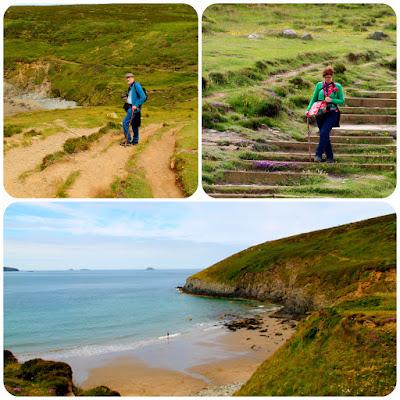 We scrambled up to St. Davids Head itself, taking in the all around view, with Carn Llidi towering behind us trying but not quite succeeding to keep the clouds at bay, and Ramsey Island out to sea. 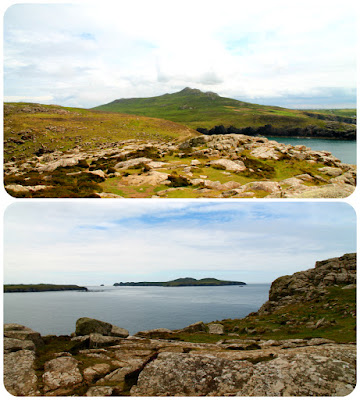 Then we went in search of Coetan Arthur on the plateau leading off from St. Davids Head, a wild, rugged landscape full of rocky outcrops. 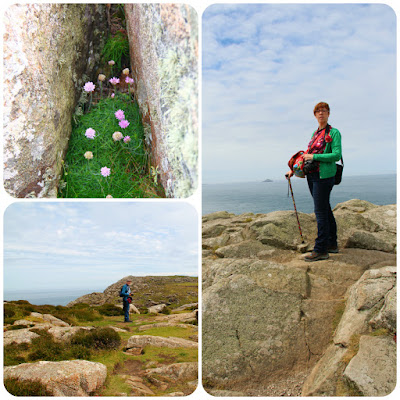 The burial chamber was surprisingly hard to find among the profusion of rocks littering the plateau, but finally Jos spotted it on the ridge to our left.

The massive capstone measures approximately 6 metres by 2,5 metres and its support is 1,5 metres in height. Nevertheless, until you are actually standing next to it, it looks deceptively small. 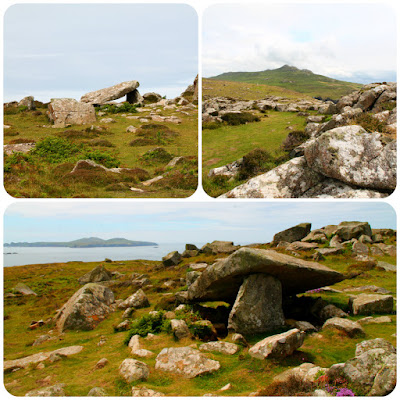 From there, we searched out a path zig-zagging down to the main coast path, and returned to Whitesands the way we'd come.

Driving back inland, where a thick blanket of grey clouds had gathered in the meantime, we looked back one more time at the receding blue sky near the coast.

Little did we know that this would be the last bit of sunshine and blue sky we'd see during our holiday ...