Friday the 21st of July was Belgium's National Holiday, so I had the day off, making it a very welcome extended weekend.

Much to our delight there was a flea market about a 20 minute drive from Dove Cottage, and as we woke up to sunshine and blue skies, we didn't waste any time getting there.

I was wearing the maxi skirt I didn't show you in a previous post, made up of two layers, a gauzy upper layer with a yellow, orange, lilac and green floral print and a solid yellow underskirt.

I racked my brains on which top to wear it with, as I have a chronic lack of interesting plain tops (sounds familiar, Goody?) and none of my printed ones did it justice. 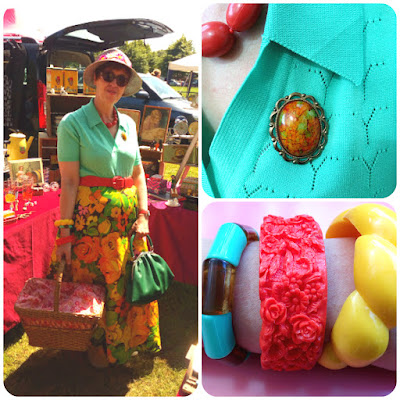 In the end, I settled for a pale green open collared Tricel top. The brooch I chose was bought at our local flea market, and has a mottled stone in greens and oranges, complementing the predominant colours of the skirt. An orange belt, beads and ring, and green, orange and yellow bangles, completed my outfit.

On my feet, a comfortable pair of flat canvas shoes, which has seen me through many a walk in Wales. In the heat of the sun, my hat proved not to be just an accessory but a bare necessity!

We browsed and admired and soon made our first purchases: a hand made crocheted purse and its baby sister, meant to be attached to your handbag to hold a supermarket cart token. Cute and clever! 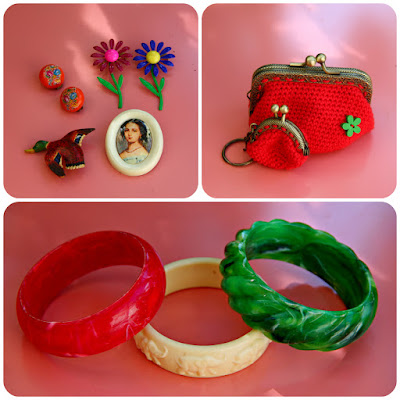 Always on the lookout for cheap 'n cheerful costume jewellery, I found several brooches and bangles.

We ran into Jos's youngest daughter, who inherited the collecting and flea market gene from her Dad! 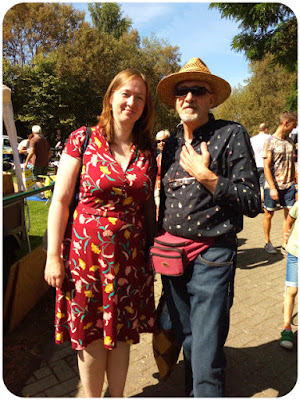 I love the dress she is wearing.

The market was a good one, with endless stalls lining the playing fields, but of course, as usual, I forgot to take photos.

This Art Deco Bakelite ashtray was cheap as chips, so couldn't be left behind, even if we aren't smokers, and it wasn't in the best of conditions.

Speaking of Bakelite, we also found this object (right), which Jos remembered from his early working days. But does anyone know what it was used for? 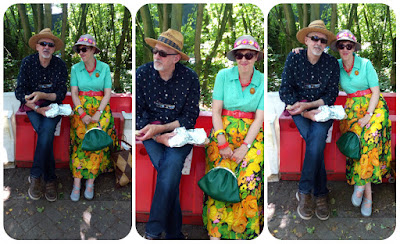 We kept picking up little odds and ends until we got hungry and settled down in a shady spot to eat our picnic. There, we were spotted once again by Jos's daughter. One thing's for sure: there's no hiding when you are dressed in colour. 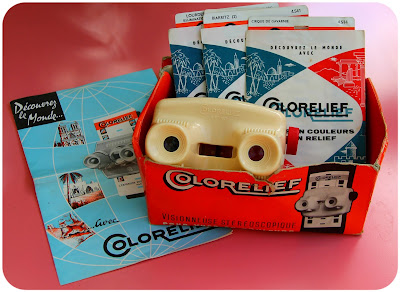 Fortified, we continued our treasure hunt, picking up this French stereoscope viewer, dating from 1956. 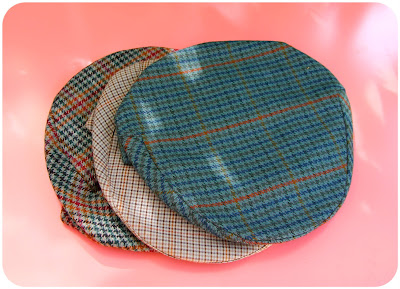 Shortly afterwards, I found this gorgeous lined basket, which I will be using as my mending basket, and which came in handy for carrying all our stuff. 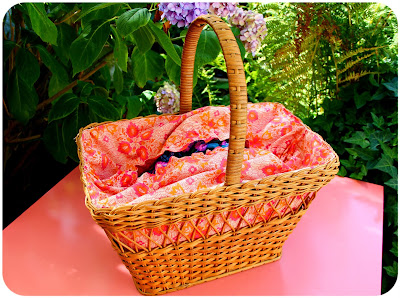 Rounding a corner, we came across a delightful stall full of temptingly displayed vintage goodies. As we were commenting on its loveliness, it dawned on us that we knew the owner, Ilona.

It's her stall I am posing in front of in the first collage.

Of course, we bought a couple of things from her! 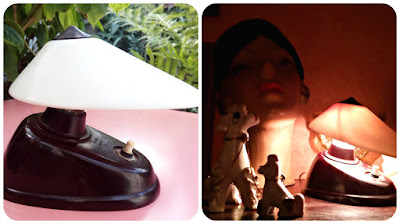 There was a small Bakelite lamp, which is now throwing some light on the objects displayed on top of our 1930s cabinet. 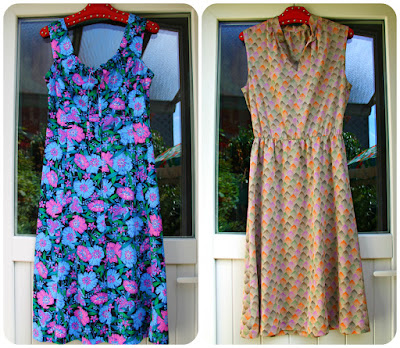 This summer dress (left) is joining my collection (the dress on the right was bought earlier at another stall) and as there was a whole box of vintage buttons, which I can never resist, I bought several packets of them. 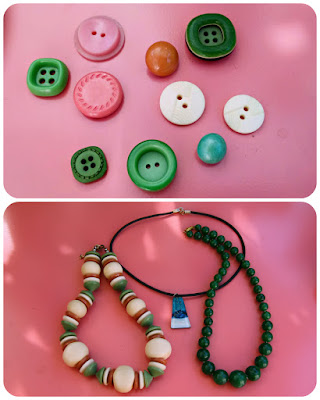 I also fell for a green, tan and cream necklace, which Ilona threw in for free! Thank you Ilona, if you are reading this! The others necklaces were found earlier at different stalls.

The dress I wore on Saturday is one of the first vintage dresses I ever bought and a firm favourite.
Actually,  I'm quite surprised that it didn't feature on my blog yet. 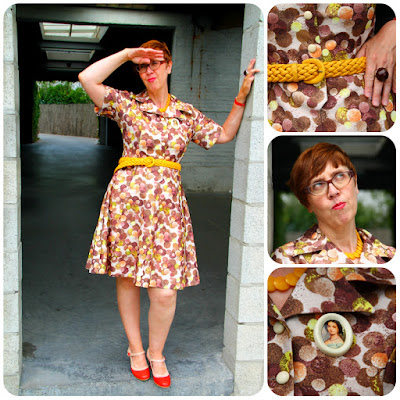 It's a fit and flare frock with a buttoned bodice and a notched collar. The print has a riot of differently sized circles in brown, orange and yellow.

Circles also feature in my yellow necklace and the round buckle of my yellow woven belt. If you look carefully, you can see I am wearing one of the brooches I bought the day before! 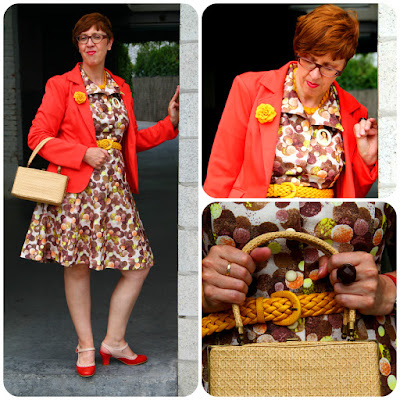 I added an orange red jacket (charity shopped) to which I'd pinned a yellow felt flower and sling backs in almost the same orange red, which were a sales bargain from a couple of years ago.

My plastic, wicker-look handbag was bought at Blender Vintage Shop back in 2013.

It should come as no surprise that we were off to the charity shops, although like Lynn I definitely do not need more stuff, as I already have more dresses than I can count.

Well, it's no use going charity shopping and not buying anything, is it?

This Kitsch Kitchen bag was € 21. If you rightly think that's quite expensive, then I should add that it includes the contents as well. 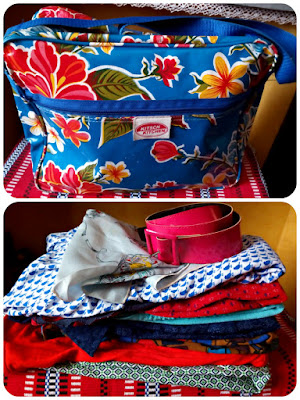 There was a shirt with a funky print for Jos, a couple of summery tops for me, and a pink belt.

Oh, and this gorgeous French silk scarf, which I'm quite a fan of! 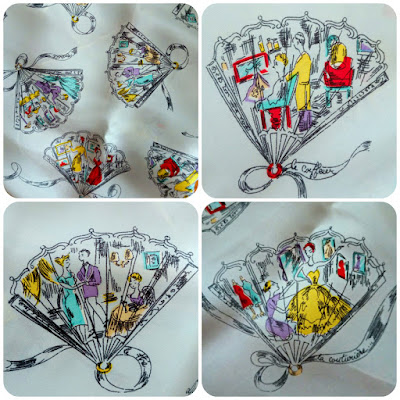 That's it for now but do stay tuned here for the penultimate episode of my Welsh travelogue ...

Posted by Polyester Princess at 19:17