There beneath the blue suburban skies

This post was going to be all about last weekend's adventures and finds but alas! it wasn't to be.
With only a couple of things found at Blender Vintage Shop to show you, and Jos having caught a kind of summer flu and thus scuppering the weekend's charity shopping and flea market plans, I was a bit at a loss for this post's theme. 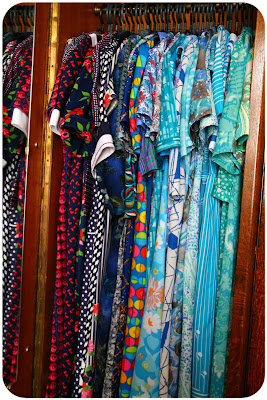 As I was having the blues, I stood in front of my open wardrobe just to look at my dresses, which usually is the best therapy in the world!

Although I profess not to have a favourite colour, I was nevertheless struck by the amount of blue my wardrobe contains. In fact, a whole section of it is dedicated to nothing but blue, ranging from delicate powder blue to navy.

I am often told that blue suits me and compliments the colour of my eyes and when I see photos of myself wearing blue, I must admit that there is some truth in this.

Blue was my favourite colour as a child and I remember having a blue swimsuit and winter coat. I actually have pictures of me wearing both, but as they are in black and white, they are quite useless for the purpose of this post! 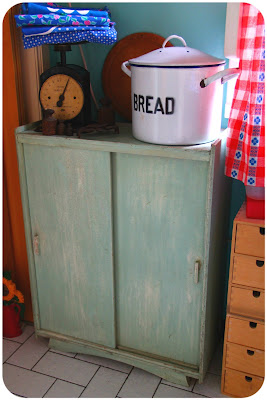 When I was three, my dad, who was a carpenter, made me a doll's wardrobe and bed, which he painted light blue. After I was done with them, they were inherited by my sister, who is ten years younger, and eventually the little wardrobe ended up in her own daughter's room.
When my niece outgrew it, I was able to rescue it from the dump just in the nick of time. It is now living in our kitchen and it is just the right size for all those small kitchen odds and ends.


The blue paint has rubbed off in places, but I just love having this chunk of childhood memory in my everyday life!

When I was six and in first grade, I had a blue dress with flower trim at the collar. This dress was made by my grandmother, Angelica the dressmaker's daughter, as indeed were most of my clothes at the time. 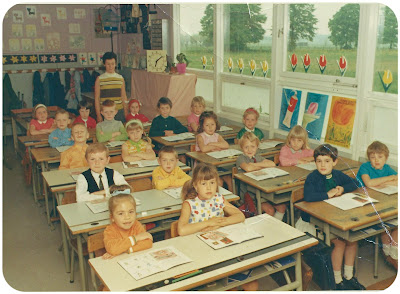 Hurray for school photographers, as here's a class photograph in full colour, taken in first grade, in which I am wearing the dress in question. As I'm the only girl in blue, I'm sure you will be able to pick me out immediately!

In honour of the blue theme there seemed to be going on by now, I wore blue dresses on both Saturday and Sunday.

Saturday's dress was a turquoise short-sleeved one, with a tie at the neck.

Now, turquoise is a colour I am often drawn to. However, being slightly colour blind, manifesting itself in a problem differentiating between certain shades of green and blue, turquoise is a particularly tricky one for me. 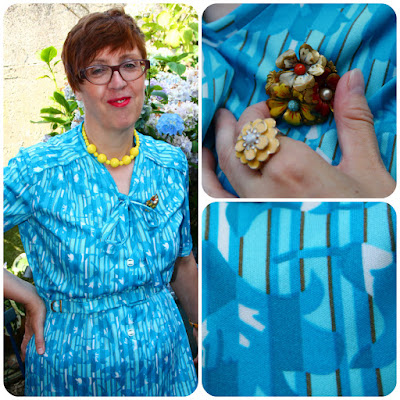 In colloquial Flemish, the colour is sometimes called apppelblauw-zeegroen, which translates as "apple blue, sea green", which in fact sums up the whole problem for me!

Sunday's dress was a sleeveless midi navy one with light blue and white spots and a pleated skirt. 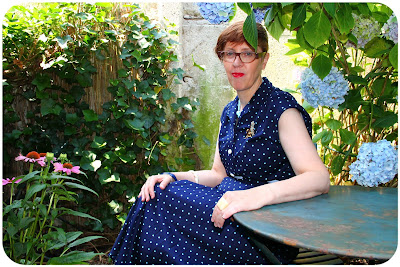 I shied away from navy for many years, as it reminded me of school uniforms, which in Belgium are quite often navy blue. And I didn't even have to wear uniform at my school!

When we had new windows fitted in our kitchen two years ago, after long deliberation and many paint test pots, we chose a turquoise-y blue (see, I'm being very careful here) as the new colour for our kitchen walls. 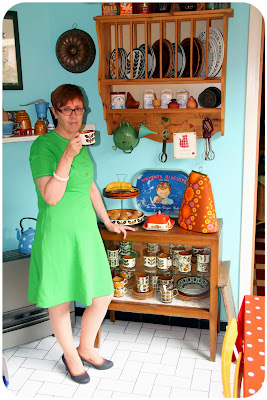 After it was finished, I posted this photo on Facebook with the caption "Kitchen Blues".
One of my friends commented it looked more like kitchen greens. But it is blue, isn't it?

I guess he meant the dress ...

Apart from the walls, there are quite a few blue items on display in our kitchen, collected from flea markets and charity shops over the years. 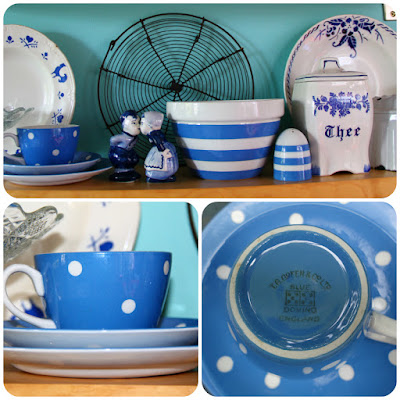 There's a shelf containing white and blue ceramics, including a Cornishware bowl and salt shaker as well as a Blue Domino breakfast set. 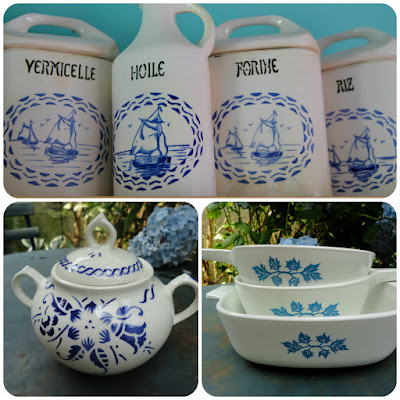 The top shelf of the same unit contains a set of blue and white canisters identifying their contents in French.  On the bottom left is a Boch sugar bowl, made in Belgium, and on the right a set of vintage Pyroflam dishes, made in the Netherlands. 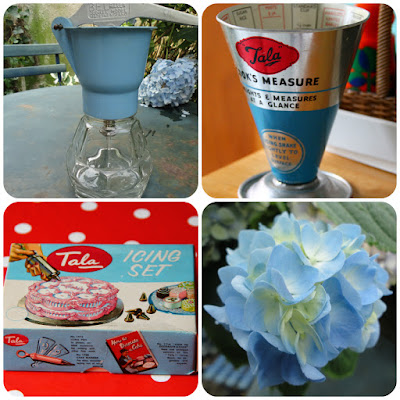 Dotted around the kitchen are an English-made BEL cream maker, and some vintage Tala items like this cook's measure and icing set. 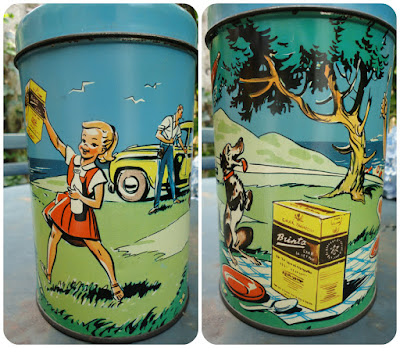 This gorgeously decorated tin was used for storing Brinta, a Dutch brand of breakfast porridge. 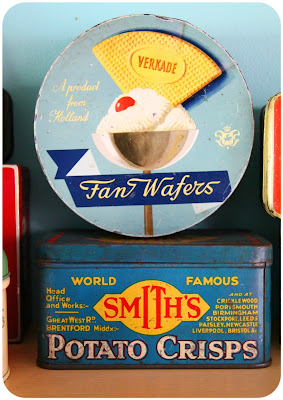 Further tins include one from Dutch brand Verkade, which used to contain ice cream wafers and a rare Smith's Potato Crisps one.

This tin tray advertising Wright's Biscuits and picturing their famous mascot, Mischief, is a favourite, in spite of it being a little worse for wear. 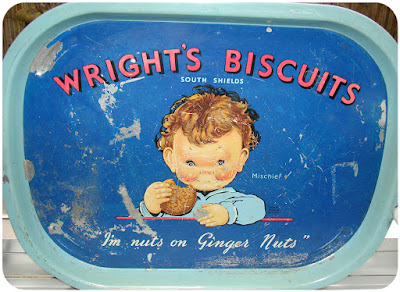 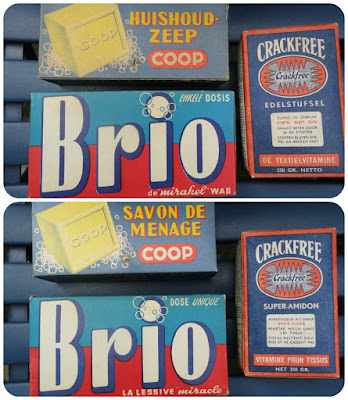 I love vintage packaging and these packets of soaps and starch are part of another little collection.
Typically for Belgium, their contents are mentioned in both Flemish and French.


Finally, another blue favourite which lives in a display cabinet in our dining room. 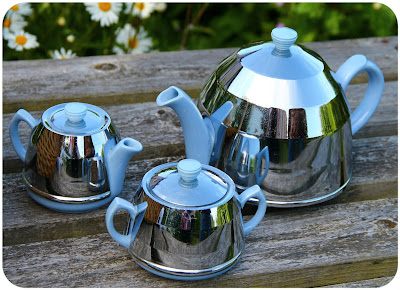 This Heatmaster tea set, probably dating from the late 1940s or early 1950s, was bought in a charity shop in Aberaeron last year. We'd spotted it on a Saturday but didn't buy it, which we regretted by Sunday. We were lucky that it was still there when we went back for it on Monday!

Now I'm ready for a more action packed weekend, starting with a round of the charity shops tomorrow ...
Posted by Polyester Princess at 19:36