Three swallows do not make a spring

Last weekend, temperatures plummeted to an almost wintry level. Ok, I know that was what the weather forecast said, but somehow I always hope that they were wrong.  But no, on Saturday we woke up to a chilly day and dark clouds soon chased the initial sun away.

Same scenario on Sunday, except that it was even colder and even more of the wet and wintry stuff came down. Ugh. I even had to dig out one of my winter coats. 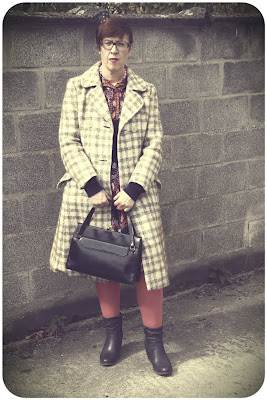 I am so bored with that coat that I applied a special effect to make it look a little different. Same old coat, though.

Of course, nothing could deter us from going on our usual treasure hunt. 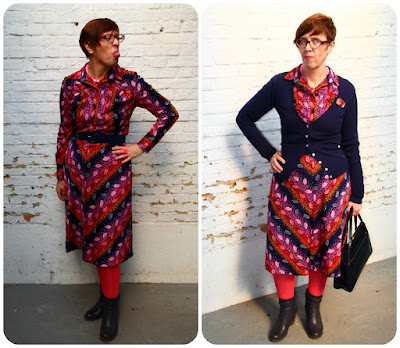 You will probably have noticed the brick wall with the peeling white paint which is the backdrop for most of my outfit pictures? Well, this wall is part of the complex where we rent a space for our car. While our garage box is a modern addition, our photo wall is part of the main complex, which is an old lemonade factory.  Although it houses several cars and bicycles, it is usually quiet so that we can take photos undisturbed. On Saturday though, we had one interruption after another, and I was starting to get really annoyed, which you can probably tell from some of the photos. 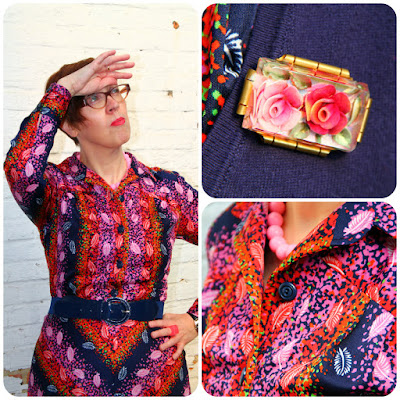 The dress I am wearing is a riot of colour, with a leafy pattern in reds and pinks (and even the odd splash of green) on a navy blue background.  I was going to wear red opaque tights with it, when I suddenly remembered these pink ones (the colour on the packaging said Raspberry). To continue with the pink theme, I chose a pink string of beads and a pink plastic ring. My first choice, a pink cardigan, made me feel all sugary, so I swapped it for a navy blue one, to which I pinned a brooch featuring two roses encased in perspex. Short navy blue boots completed the outfit. 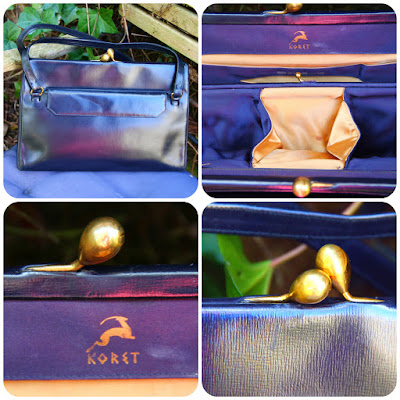 The Koret handbag has some nice details and was bought for € 4 last year. 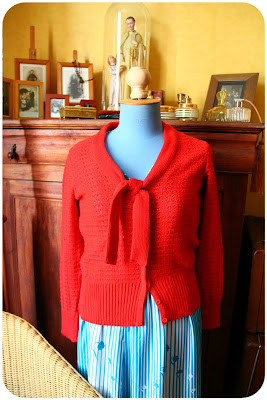 Saturday’s charity shopping trip did not yield much treasure. After visiting two shops, the only thing I’d found was a new-to-me red cardigan from Belgian label Wow To Go. I paid € 3, which is not bad if you know their cardigans retail for about € 65.


We decided to visit one more shop, which was a good thing, as it was there that we finally struck gold. Look at the wonderful colours in this vintage newspaper/letter wall rack. 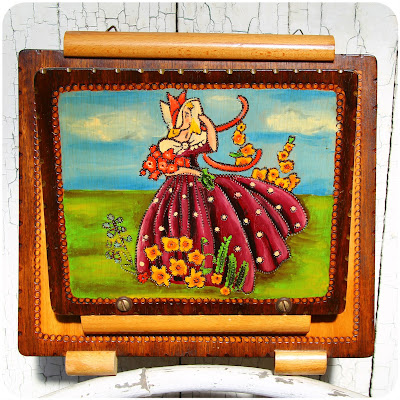 We have several of these, only one of which is actually being used for storing newspapers and magazines, but this is the loveliest by far. It will be used in our kitchen to hold recipes and the like. 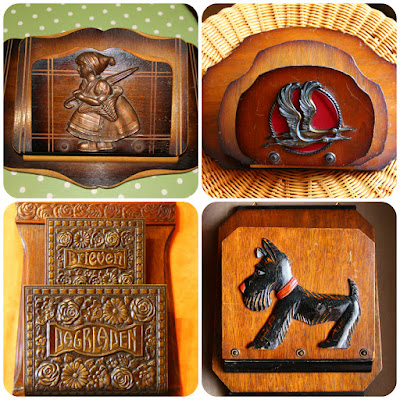 On Sunday there was another indoor flea market to visit, in the nearby town of Mechelen, which is about half way between Antwerp and Brussels. This market too is being held on a monthly basis, except in July and August.

It is a much better flea market than the one in Antwerp as its stalls are generally of a higher quality with lots of vintage stuff. There was no sign of any end-of-season slump: no gaps between stalls and lots of punters.

We were very frugal and didn’t spend much money, but we did find some nice things. 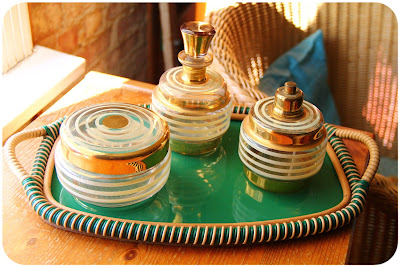 This little green wicker and glass tray cost just € 3,50 and is perfect for displaying the vanity set my parents got as a wedding present in 1956.

Look at the opalescent jade green colour of this Fire King cup! We do not collect this set at all, but we pick up pieces now and again when we find them at too ridiculous a price to leave them behind (milk jug for € 0.25 anyone?). We now have two milk jugs, and a cup and saucer. 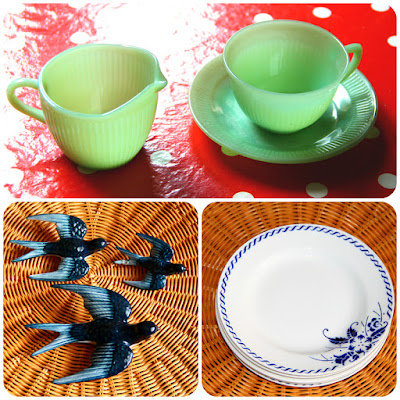 A set of three 1960s flying swallows set us back a total of € 1. We have several locations for them in mind, but we need to find a good way to wall-mount them, as they keep flying upwards instead of sideways.

We also found a stack of pristine Boch breakfast plates. Now we just need the cups and saucers, but it seems they are a rare thing. From experience we know that we will be rewarded for our patience and that one day we will stumble across them. 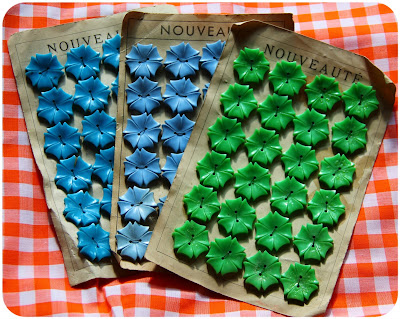 To add to my endless stash of vintage buttons: three sets of flower-shaped ones, still on their original cards.

The most expensive find, though, was not a vintage one. The flea market always has a huge stall of books on collectibles.  If money was no objection, I could happily buy dozens of books from them. As it is, we only bought one, on European record players from 1945-1975. 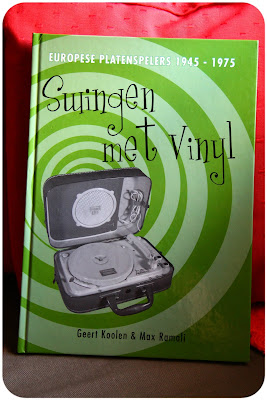 Portable record players are one of my husband’s collections, which unfortunately has to be reined in due to lack of space. He is especially interested in Philips ones, as he used to work at Philips in the late 1960s/early 1970s.

Another week has flown by and I am ready for another weekend.

Have you got any exciting plans for the weekend? If you're in the UK: have a great Bank Holiday weekend!