Oh, I could definitely get used to the warmer spring weather we’ve been having last week, but it wasn’t to be, as the forecast for the weekend was rather grim and temperatures were expected to drop quite dramatically.

Sure enough, it was rather chilly on Saturday and although the sun made regular appearances between the showers, there was an arctic wind, making me regret that I’d just put away my winter woollies. 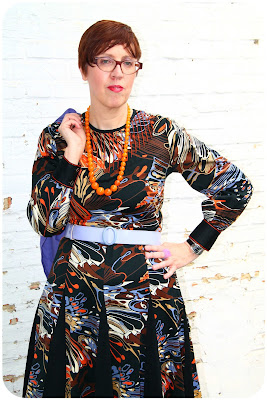 This is what I wore for our weekly charity shopping trip on Saturday.

I rather defied the weather in this long-sleeved kaleidoscope print dress, as its cottony fabric, although lined, is quite thin.  The bodice is fitted and embellished by orange stitching. The skirt has alternate panels of printed and plain black fabric.


I bought the dress at Episode, which is a Dutch chain of vintage shops. After having been absent from Antwerp for several years, they re-opened a branch here last summer. I must say that I’m not a great fan of the shop. Not only are they more expensive than my usual vintage haunts, there’s a lot of focus on the 1980s and 1990s, as well as recycled pieces, which are not really my thing. There are still some nice things to be found, though, like this dress, which was too good to resist. 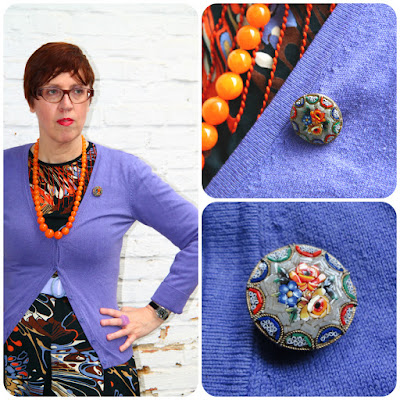 The obvious choice would have been my orange cardigan, but I went for a lavender blue one, picking up the blue in the dress’s print.  I added a belt in pale lilac.

The beautiful micro-mosaic brooch I’m wearing features both lilac and orange and was bought at Carmarthen Flea Market last June. 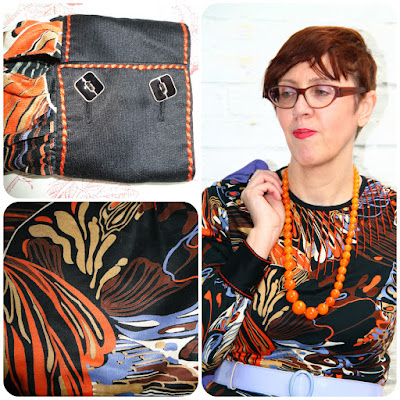 I didn’t want to neglect the orange in the dress, so I chose to wear a long string of orange beads.

As it was cold, I wore one of my favourite between-seasons coats, in a gorgeous blue colour. The woollen scarves all being stashed away,  I had to make do with a sheer ochre yellow one featuring white polka dots, which contrasts really well with the blue. 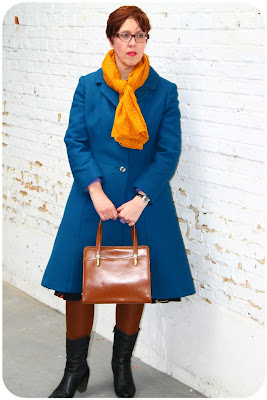 As for Saturday’s charity shopping, we came back with nothing, which was a bit disappointing to say the least.

Since we were home early, I spent my time doing repairs on a dress I bought a couple of weeks ago. There were some split seams and the red buttons were rather faded as well as boring, so I replaced them with white vintage ones from my stash. 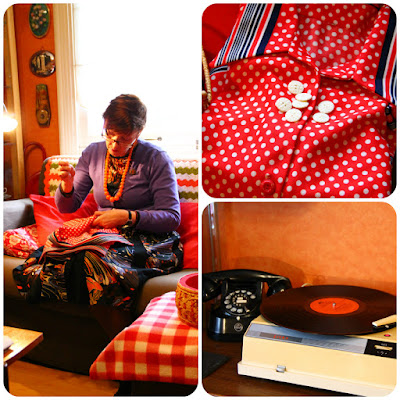 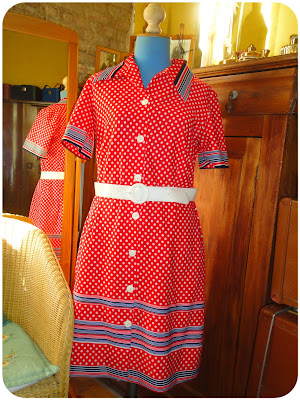 
There was also time to catch up on some reading. These are the books I currently have on the go. 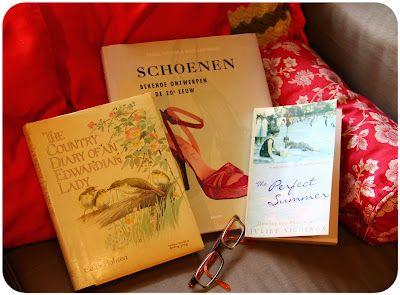 As you will probably guess: “schoenen” is the word for “shoes” in Flemish.  It’s a translation of the book “A Century of Shoes – Icons of Style in the 20th Century” by Angela Pattison and Nigel Cawthorne. The book deals with the socio-cultural history of footwear in the 20th century, as well as highlighting iconic shoe designs and famous designers, old and new. 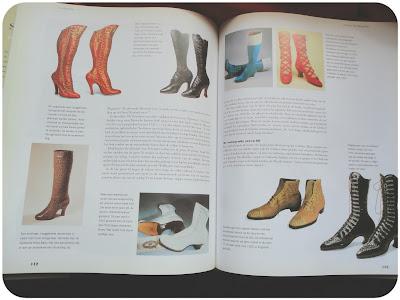 The Diary of an Edwardian lady was picked up in a charity shop for less than € 1 and contains nature notes and beautiful drawings made by the author, Edith Holden, in 1906. It is a book to dip into now and again. 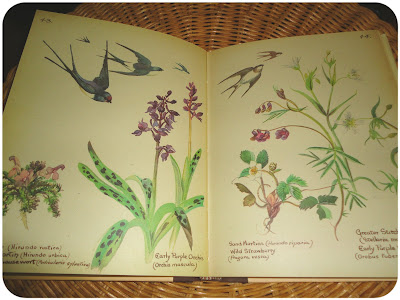 The Perfect Summer: Dancing into Shadow in 1911, is a fascinating read, describing the events taking place in England in the glorious summer of 1911, just before the world was to be changed forever. 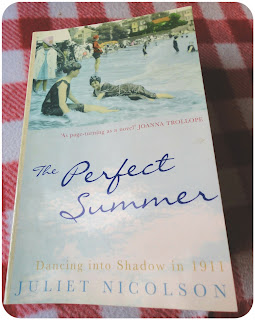 The book is written by Juliet Nicolson, who is Vita Sackville-West’s granddaughter.


Her latest book, A House Full of Daughters, a family memoir, will be released in June, and as this is a book I’m particularly interested in, I will be on the lookout for it when I’m next in the UK, which incidentally will be in June.

Have you read any good books lately?

And is there anyone else who has several books on the go at once?