With just one more week's worth of November days ahead of us, Saturday the 5th November seems like an eternity ago. That day, we were served a menu of sunshine and clouds and highs of 12°C, which feels like the height of luxury in hindsight, now that true Autumn has finally arrived on our doorsteps.
Nevertheless, I thought the weather had cooled down sufficiently for one of my long-sleeved Diolen frocks. Found in a charity shop in January 2017, it's one of my all-time favourites. Obviously, its bottle green colour meant that it was love at first sight, but it's the dress's white, cream, yellow and burnt orange geometric pattern which adds a ray of sunshine even on those days when the sun isn't much in evidence. 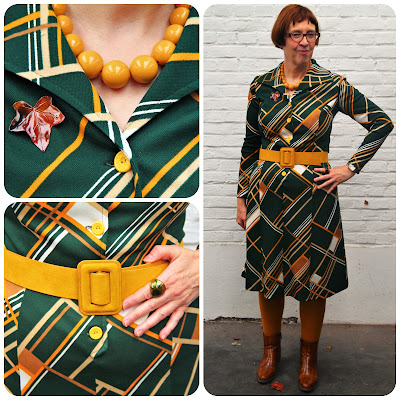 My yellow beaded necklace and suede belt, the latter a recent bargain for an outlet shop, helped to give the waning sun a run for her money.  A shiny Autumn leaf brooch was added as a nod to the reigning season.
Although they always show up as more of burnt orange in photos, the opaques I'm wearing actually match my necklace and belt almost exactly.
The warm woollen jacket with its symphony of sage greens was charity shopped in the Autumn of 2018, when I was lucky enough to find two blazers in my holy grail colour of green in quick succession. To its lapel, I pinned an orange felt flower corsage. 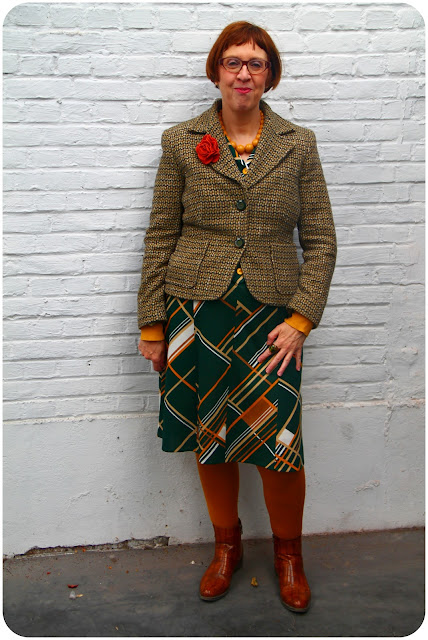 Flush with Friday's thrifting success, we packed a picnic after breakfast, and went for another round of rummaging at two of our favourite charity shops.
Our first port of call was the shop on the industrial estate in Mechelen. If due to various reasons it had somewhat fallen out of favour during the pandemic, there has been a definite improvement in the last couple of months. In fact, it has been quite a while since we left the shop empty handed.
This was, after all, the shop where I found the green checked Tommy Hilfiger skirt and the zig-zag twin set I showcased in a previous post! 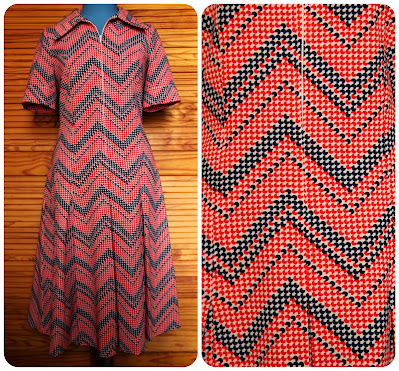 In fact, my first find that Saturday featured yet more zig-zags in this red, blue and white short-sleeved and front zippered vintage frock. It's from Penney, which was the label sold by the well-known Belgian department store Sarma (1928-2004). They were taken over by the American chain J. C. Penney at the end of the 1960s, hence the label's name. 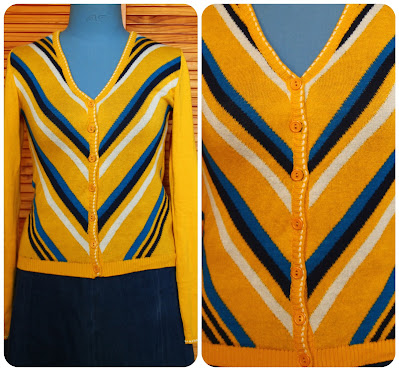 The cheerful yellow cardigan with its blue and white chevron pattern was an obvious no-brainer. It was new with tags from the former Belgian label Who's That Girl. They had a second label called Wow To Go, which I might have mentioned on the blog once or twice. They were the label which made me fall in love with dresses again after I snapped up a gorgeous green one at a bargain price in a trendy boutique in Antwerp. Subsequently, I bought lots of their stuff, most notably at one of the label's sample sales. Once, I even won a € 100 voucher to be spent at one of their shops by entering a competition on Facebook. 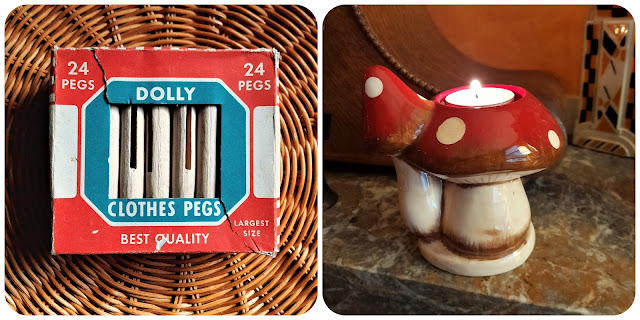 Further finds were a box of old-fashioned dolly clothes pegs, which has joined our kitchen cabinet of curiosities and a ceramic toadstool tealight holder, which was simply too cute to resist.
From here, we continued to the shop in Duffel near the park where, as the weather had become too blustery to comfortably sit on a bench, we had a car picnic before continuing our rummaging.
Imagine my delight when the first item I set eyes on was a dress by the aforementioned Wow To Go. How fabulous is that pink and brown checked fabric? The collar, cuffs and wide round buckled belt are in a soft fine rib corduroy. 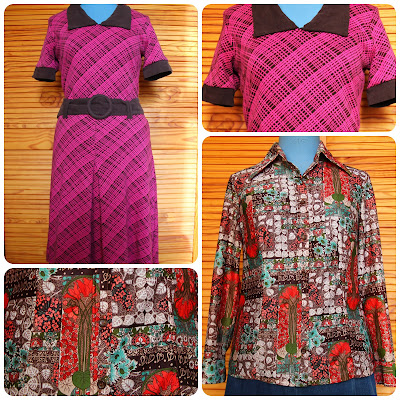 I also fell for the riotous pattern - with some clear Art Nouveau influences - of this vintage blouse, and the lime green midi skirt with its stylish black and white flowers. The latter is from a label called Collection Catarina, which I Googled but couldn't find anything about. Someone had made a clumsy attempt at taking in the skirt so that it was initially too tight for me. As it looked fairly easy to undo, I decided to take a chance. 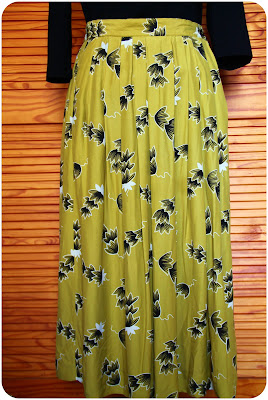 Too dismal a day, with rain from late morning onwards, Sunday was the perfect day to tackle such a job.  After I'd unpicked the unsightly stitches, a previously unnoticed feature in the form of two side pockets came to light! Then it was just a question of moving the button to its rightful position and hey presto: a perfectly fitting skirt with pockets!
The weather didn't allow for going outside for outfit photos, so your guess is as good as mine as to what I was wearing that day. 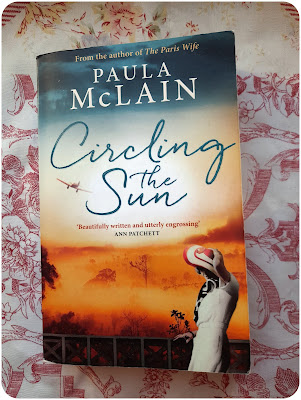 My journal tells me that I finished my latest read, Circling the Sun by Paula McLain, a fictional account of the early life of Beryl Markham who, in 1936, was the first person to fly solo, non-stop across the Atlantic from Britain to North America. I loved this book, and it has certainly whetted my appetite for reading her memoir, West with the Night, which was published in 1942. 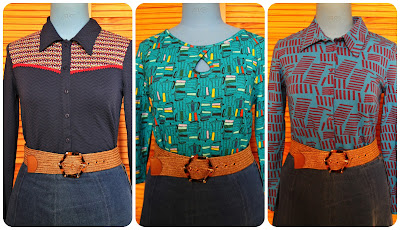 Monday and Tuesday brought the typical mix of sunshine, clouds and showers, the latter usually occurring during my commute or lunch break.
It was nothing but a relief to have the sun accompany us through Wednesday, so that I could soothe my pre-move jitters by going for a walk and what Sheila would call a wee mental health shop. Although Think Twice was a disappointment, I found some funky tops by - yet again - Who's That Girl and Wow To Go, in an outlet shop across the street. It was only when I was photographing them that I noticed the pattern of the middle one are coffee pots! 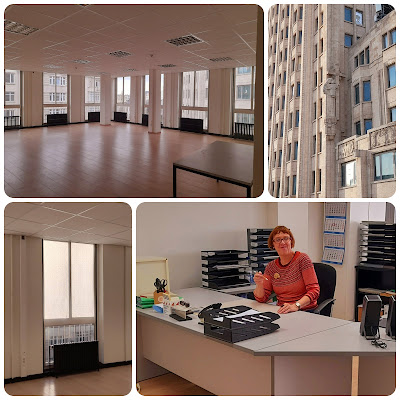 Thursday the 10th was moving day which, as already mentioned in an earlier post, went surprisingly well. After the moving guys had finished, it was the turn of the IT guy to make sure that we were connected, and so it was mid-afternoon when we could finally switch on our PCs and catch up with work.
We fooled everyone with our makeshift blinds (above, bottom left) which were temporary ones we'd fashioned from a roll of disposable paper tablecloth. After all, we will only be staying here until January, when we'll move back to our renovated premises. 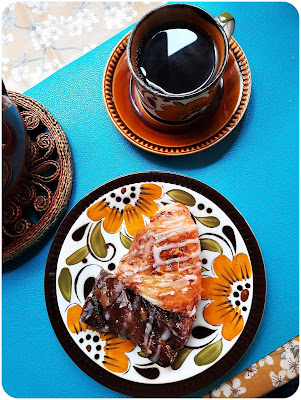 But first, a well-deserved day off!
Friday the 11th being Armistice Day is a public holiday in Belgium. We had a lie-in, then after breakfast I washed my hair and photographed my latest finds. By then it was time for lunch, consisting of free pastries leftover from our office move and coffee made from ground coffee beans Jos got for free with his purchases at the organic village shop. 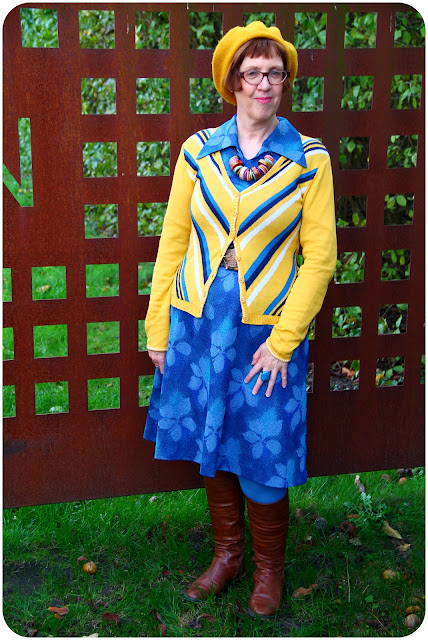 As the sun was still keeping us company, it would have been downright silly to spend the rest of the day inside. As we hadn't been to Middelheim Sculpture Park for a while, that was our destination for the afternoon settled. 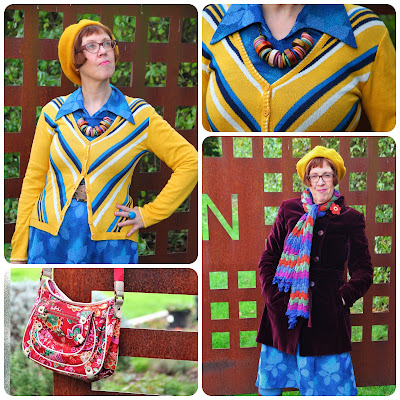 The temperature remained in the low double digits, so this long-sleeved yet lightweight blue vintage dress from Think Twice was enough to keep the chills at bay. Especially when topped with my recently thrifted yellow cardigan, not to mention the burgundy velvet vintage C&A coat I charity shopped last Autumn.
Note the wooden poppy I pinned to my coat. It was that time of year after all.
A yellow beret and multi-coloured knit scarf completed my outerwear and I carried essentials in my Oilily weekend bag. 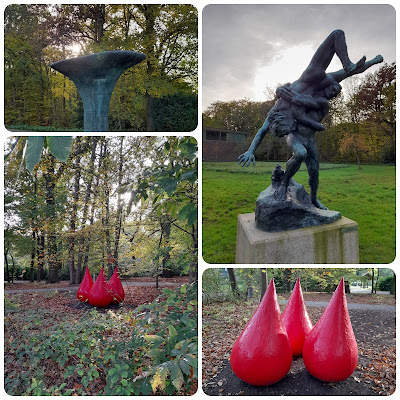 Apparently, changes are ahead in the sculpture park. There will be a reshuffle of the sculptures and no less than thirty new ones will be added. The arrangement will be thematic with the relationship between (wo)man and nature as the central theme. A new open-air depot will allow the collection to rotate more smoothly. The park will also become greener with the planting of sixty trees and two thousand shrubs.
While all of this is expected to be finished by the end of 2023, things were still mostly the same at the time of our visit. 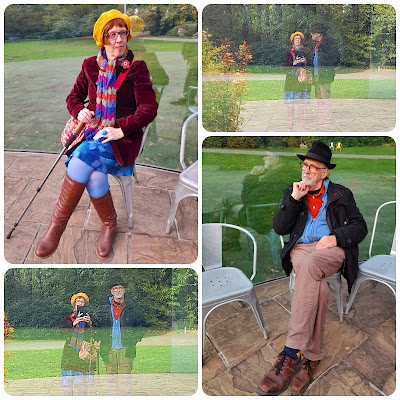 We caught our ghostly reflections in the glass panels of the recently restored Belgian Funhouse by the American artist Dan Graham (1940-2022). Graham was an all-around artist who not only sculpted but was also a photographer, film-maker and performance artist. He played an integral role in beginnings of Conceptual Art during the 1960s.
Reflection was an essential component in Graham’s work, and he was best known for his his outdoor pavilions containing glistening reflective plates of glass like Belgian Funhouse. Dating from 2004, it was originally created for a square in Antwerp but moved to Middelheim after suffering damage. 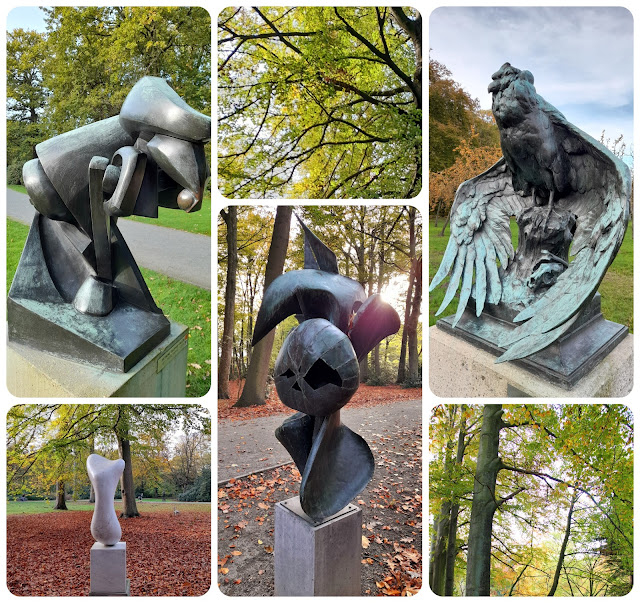 We just wandered around without any particular itinerary but delighting in the organic mix of art and nature which continues to make the park an all-seasons favourite.
We wondered and sometimes sniggered at the names the works of art have been given by their creators, shaking our heads at those with the unimaginative Untitled moniker.
First prize goes to the work on the bottom centre, which is called Les Murs ont des Oreilles que la Raison ne Connait pas. It's by the Belgian sculptor Reinhoud d'Haese (1928-2007) and dates from 1958. 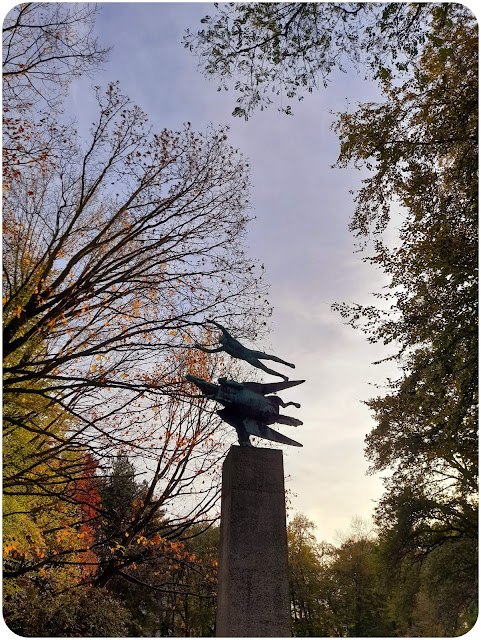 This particular visit's favourite photo, however, is this one, of the sculpture called Pegasus. Dating from 1949, its creator is the Swedish sculptor Carl Milles (1875-1955). In Spring and Summer, exuberant foliage somewhat obscures its magnificence, which was now enhanced by the glow of  the low-slung Autumn afternoon sunshine.
Posted by Polyester Princess at 18:56