In the place of fallen leaves

Now that the dust had settled on the first installment of the office move, it was finally time to relax.

And what better way to do so than by enjoying a 3-day weekend, starting with a public holiday on Armistice Day. As I already regaled you with that day's adventures in the sculpture park in a previous post, let's move swiftly to the rest of the weekend.

With everything being closed on Friday, there was nothing for it but to indulge our rummaging urges on Saturday the 12th when, as usual, we visited two shops, with a car picnic in between. Rather unusually though, there wasn't anything which even remotely tickled our fancy.

As those of you who have been following my blog for a while will have gathered by now, this doesn't happen all too often. I can only surmise that it was just one of those days on which the charity shop goddesses must have been lavishing their attention elsewhere! 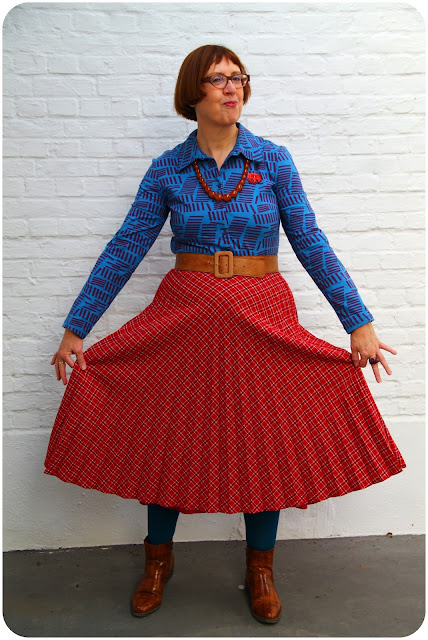 Perhaps it peeved them that, apart from my belt and necklace, most of what I was wearing that day didn't find its origins in a charity shop.
Take the blouse, for instance, which I actually bought brand new, snapped up in an Outlet shop during one of my lunch breaks the other week. My matching opaques and favourite mock croc ankle boots were retail buys too, as was the ring which I picked up from fast fashion shop Forever 21 back in the mists of time. 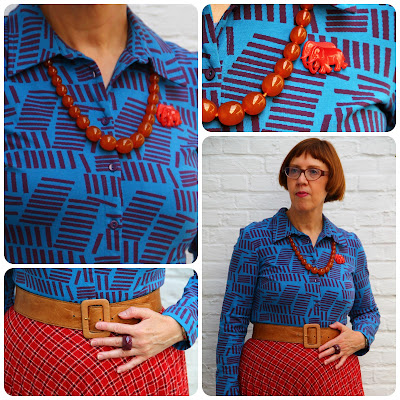 While not charity shopped, at least both the skirt and the elephant brooch are vintage. My red plaid and pleated skirt, which much to my surprise I hadn't worn since January 2018, came from Think Twice, while the brooch was a flea market find.
Contrary to the charity shop deities, those in charge of the weather kept being on their best behaviour. When we woke up to lashings of sunshine and forecasted highs of 15°C on Sunday, we were adamant to make the most of our good fortune by going for a walk. Particularly since the forecast for the week ahead was looking pretty dire! 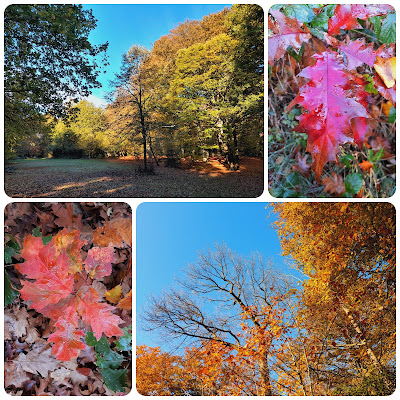 We'd set our hearts on a stroll in a park established on the pleasure grounds of an old castle estate called Solhof, in the neighbouring village of Aartselaar
This was one of the parks we'd attempted to visit but couldn't reach back in October. Confident that the roadworks which had thwarted our plans would have been completed by now, we hopped into our car for the 12 minute drive it would take us to get there. Imagine our dismay when the street leading towards the park's entrance turned out to be still under construction.  As one or two cars - probably belonging to the street's unfortunate residents - were turning into the bumpy, unsurfaced road, we followed suit and were rewarded with a parking spot in a side street. 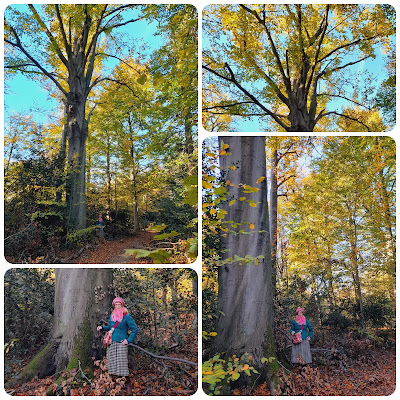 The park, designed in English landscape style inspired by Capability Brown, is now a semi-wild woodland traversed by a warren of meandering paths, and is home to a number of monumental 100 to 150 year old trees. I'm always in awe of these mighty giants who, I'm sure, must have a few tales to tell if only they could speak our language.
They do put me in a reflective mood, reminding me of our insignificance and putting those little day-to-day woes into perspective. 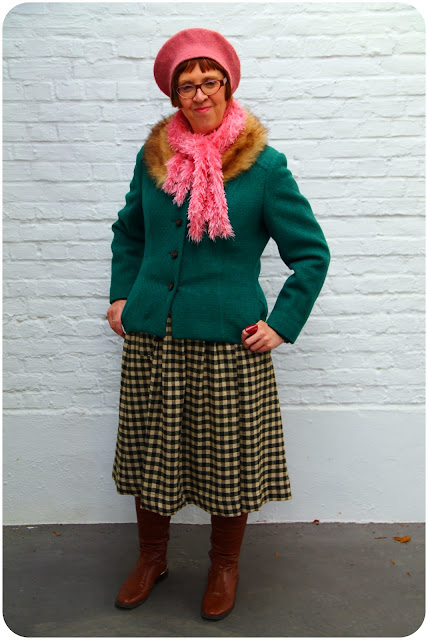 Trying to get back into the charity shop goddesses' favour, I was wearing some of my recent finds, starting with the off-white and bottle green checked wool-blend Tommy Hilfiger skirt I found back in October.
I always look forward to wearing my green wool jacket with its furry collar again. It's vintage and I paid full price for it at Think Twice about five years ago. As it was the jacket of my dreams, there was no way I was going to take the risk of waiting for it to be reduced in the shop's next sales!
The feathery pink scarf was charity shopped in 2018 and is among my most worn ones, while the matching beret was an old retail buy which has definitely proved its worth over the years. 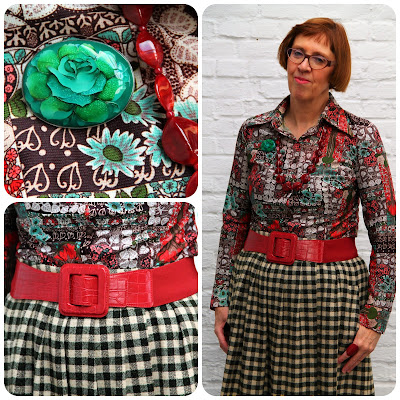 A mix of retail, charity shop and flea market finds made up the rest of my outfit, most notably the Art Nouveau inspired vintage blouse found during a charity shop rummage earlier this month.
I'm at my happiest when I'm able to indulge in a leaf-kicking session, delight in the symphony of colours provided by the turning leaves and have the scintillating mix of Autumn scents tickle my nostrils. 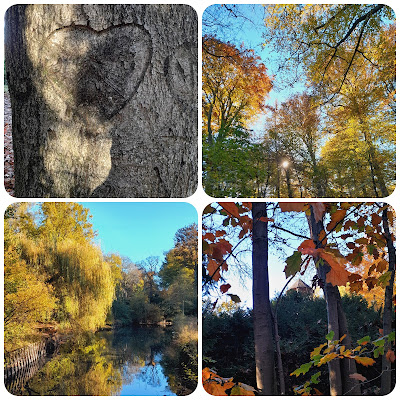 There were vistas to delight us around every corner: a time-worn heart carved in a tree trunk, the Autumn-hued canopy above us, a golden-clad weeping willow preening itself in the moat, and the top of the gazebo peeking out from a frame of evergreen yew hedge and russet leaves. 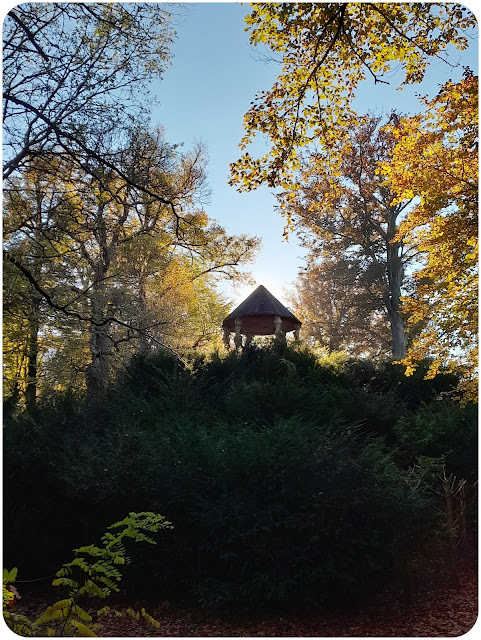 The gazebo, which crowns an earthen mound insulated by ancient yew hedges cleverly concealing an ice house, can be reached by a narrow path spiralling up the mound. We weren't feeling too adventurous that day and refrained from climbing to the top. After all, the view from up there isn't on a par with the  magical one of the gazebo on its mound, the seemingly impenetrable wall of yews conjuring up an image of Sleeping Beauty's castle. 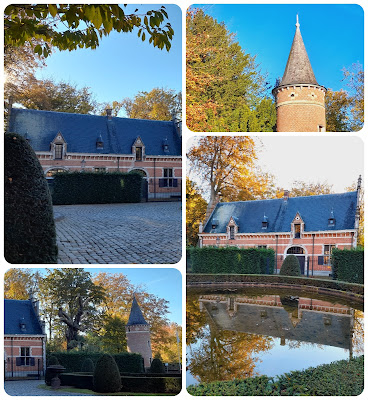 The late 19th century castle has been much modernized and turned into a fancy hotel and for all its air and graces isn't much to look at.
Taking the path skirting the castle and its moat took us to its entrance on the busy main road through the village. Our effort was rewarded with a view of the picturesque courtyard flanked by the former coach house and caretaker's house. Surprisingly these only date from the early 20th century. Only the two watchtowers dating from around 1550 and standing sentinel on either side of the entrance, have stood the test of time. 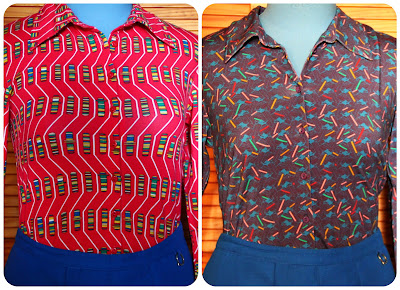 Although the sun was still in evidence on Monday the 14the of November, there was a significant drop in temperature with highs between 7 and 10°C. That morning, I actually wore gloves for first time this season!
It was my first day at the temporary office, and as my colleague had the day off, I was all on my own. I felt a bit weird and out of sorts all day, as if I had lost all sense of direction. On top of that, building work had started in our proper office next door, at times accompanied by lots of noise, making all efforts to concentrate on my work fruitless.
I made my escape during lunch break and walked to the outlet shop where I'd bought the three blouses the previous week, finding an additional two. Again, both are from the defunct Who's That Girl/Wow To Go labels. 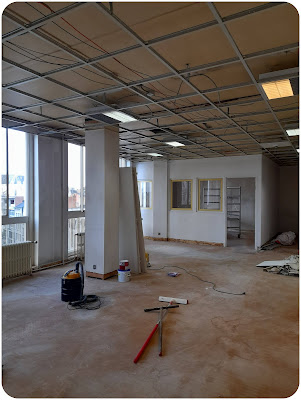 Apart from some hammering and shouting - why do these builders always have to shout, I wonder - the noise was bearable for the rest of the week, and when my colleague and I went to have a peek on Wednesday, they'd already removed the nasty old carpet and the ceiling tiles and they were in the process of painting the walls and woodwork. 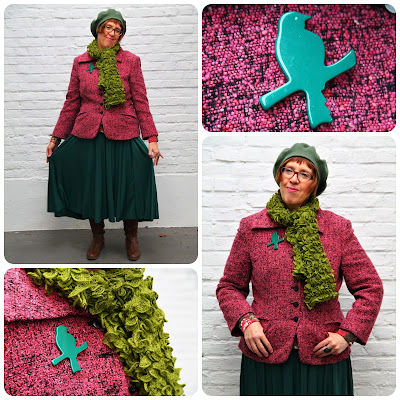 My working week was another short one as I once again took Friday off.
It had been a wet and windy couple of days, so we were glad to wake up to a dry morning, with some timid sunshine thrown in. It didn't last long, though, as it started raining again before the morning was over, with hardly any let up all day. It was quite chilly as well, the mercury climbing to 9°C at the very utmost.
This called for a first wearing for the Italian made pink Tweed jacket with its gorgeous floral lining I charity shopped at the end of October. I can't remember where or when I bought the large green bird-on-a-branch brooch I pinned to the jacket. More shades of green were added with my scarf - last Winter's charity shop find - and beret, which is the twin of the pink one worn above. 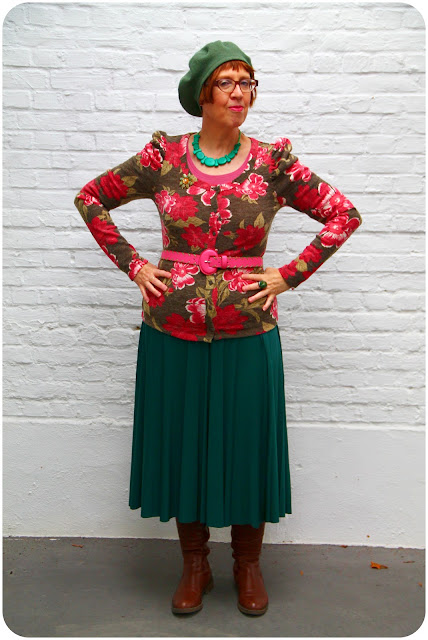 The forest green pleated skirt - a naughty retail buy in between Lockdowns in 2020 - wasn't the best choice for the day's temperature. Its fabric is rather thin and even with a half-slip worn underneath as well as a pair of opaques and my tall mock croc boots, my bottom half was freezing!
My pink and green belt was bought in this year's Mango Summer sales, but the floral cardigan-worn-as-a-jumper, the brooch I pinned to it, the green wooden necklace from the Belgian Les Cordes label, and my ring with its green and pink stone, were all charity shopped at one time or another. 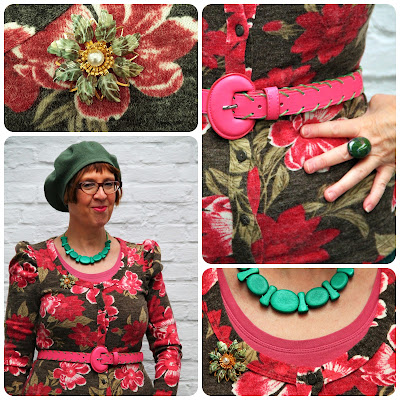 And talking of charity shopping, well yes, it was time for another round of rummaging, which this time was rather more successful.
As luck would have it, there were a lot of deadstock Who's That Girl and Wow To Go items on the rails of the first shop we visited. The lady at the till, who recognized the label, congratulated me on my finds, which would have cost me at least a tenfold of the € 25 I paid for the lot if I'd bought them brand new. 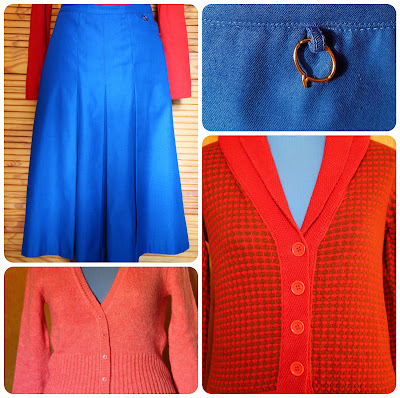 There was a blue box-pleated cotton-blend midi skirt adorned with the label's speech bubble logo, an orange and olive green check shawl-collared cardigan and a pink woollen jumper masquerading as a cardigan. I was properly fooled by the latter as I only discovered it wasn't actually a cardigan after I got it home. 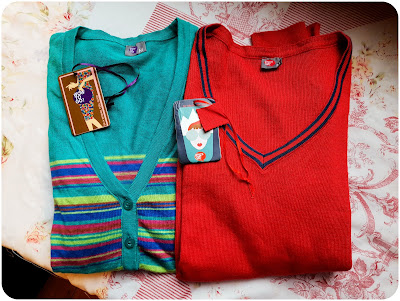 Finally, there was a green rainbow striped cropped cardigan and a classic red V-neck jumper trimmed with a double row of navy stripes. I've included the ribbon-tied tags in the photo. Both garments also came with a tiny zip-lock bag containing alternative fabric samples, indicating that the garments were initially meant as samples and would have eventually been sold at one of the label's sample sales. They both mentioned their sample sale prices of around € 25 ... which if you remember was what I paid for the lot!
I'll be back with more outfits and bargains in my next post. Hope to see you again in a couple of days!
Posted by Polyester Princess at 19:09