On April's final Friday, we woke up to a cloudy and overcast day, which somewhat put a damper on our plans. The sun would manage to make an appearance mid-afternoon, but unfortunately didn't succeed in making the 15°C the mercury eventually climbed to feel any warmer.

After our customary fruit & yoghurt breakfast, I washed my hair and got dressed while Jos walked into the village to get a newspaper. For many years now, he has been in the habit of bringing back one for an elderly neighbour as well. Lately,though, his morning walk has become just a little longer now that the lady in question has moved to service flat a bit further along.

Upon his return, he slapped together a couple of sandwiches to take on our customary charity shop trawl. Our first stop that day, however, was at his son and daughter-in-law's house as we were looking after their cat Abby that week. 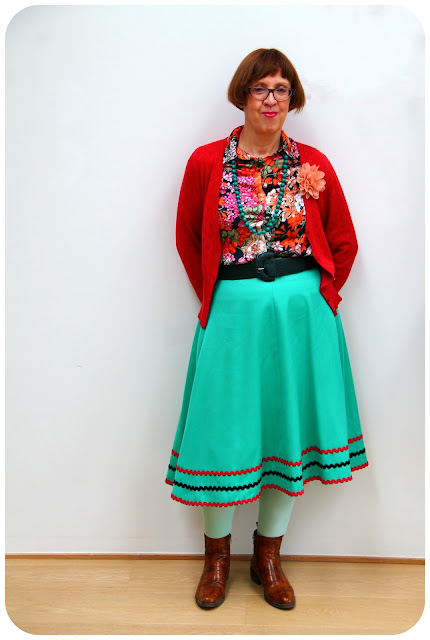 Once there, we took advantage of the lofty proportions and blank expanse of white painted wall of their living room to take a batch of outfit photos.
Tired of my Winter skirts but still too chilly to wear my flimsier Spring and Summer ones, I plucked this pale green circle skirt, which is made of a sturdy cotton, from my wardrobe. Charity shopped in April 2019, I'm sure you won't be surprised if I tell you that it were the rows red and black rick-rack which cinched the deal. 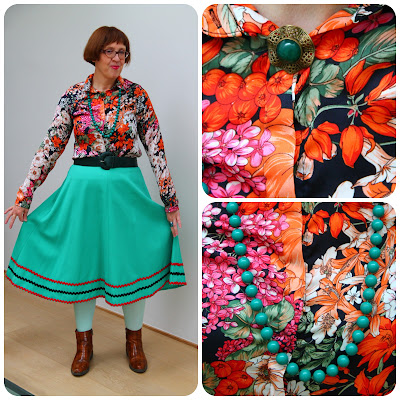 The skirt didn't feature in my original plan, though. I already had the blouse with its full-on flowers and berries pattern in mind but it didn't work with the skirt I'd initially earmarked for it.
The blouse, which is charity shopped Zara, is very slippery and  kept trying to escape from my skirt  even after I'd tucked it into the waistband of the pale green opaques I was wearing.
I secured its floppy collar with a green hearted brooch, added a string of green beads and completed my outfit with a dark green mock croc belt. 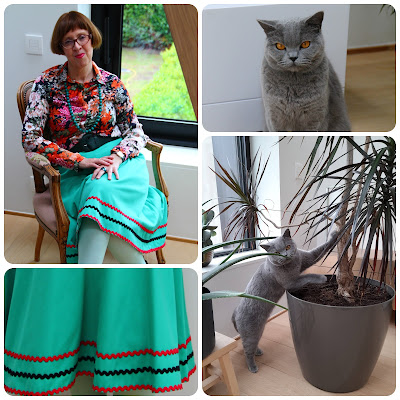 We fed and watered Abby - a.k.a. The Lady of the House - and hung around for a while until the attention seeking madam started attacking a houseplant. Not wanting to be implicated in any further acts of vandalism, we beat a hasty retreat! 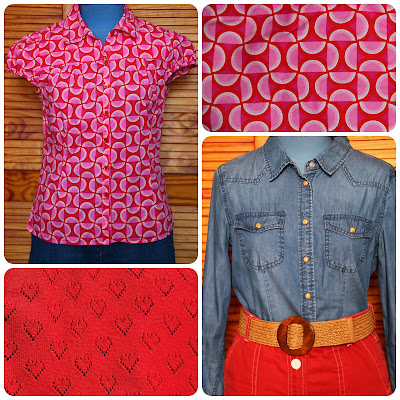 My charity shop finds that day included an orange and pink patterned cotton top by Belgian label Mer du Nord and a denim shirt which had been on my list for the longest time.
Oh, and another King Louie heart patterned cardigan. I already have a red one - in fact, I was wearing it that very day - but at € 4,90 I wasn't going to leave it behind. They differentiate between labels in this particular shop, and King Louie items are usually on the rail of posh labels, where its price tag would have been € 13,90. Clearly someone hadn't be doing their job properly :-) 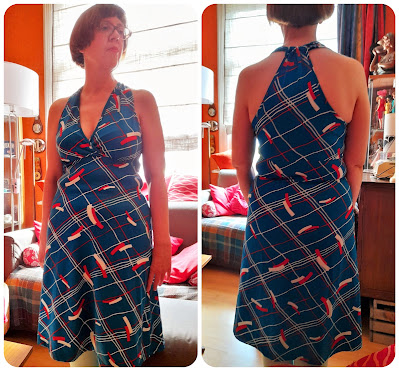 I also snapped up this King Louie sundress which came with a cheap price tag as well, as it was probably priced by the same person.
Rather than have Angelica doing the honours, I insisted on modelling it myself! 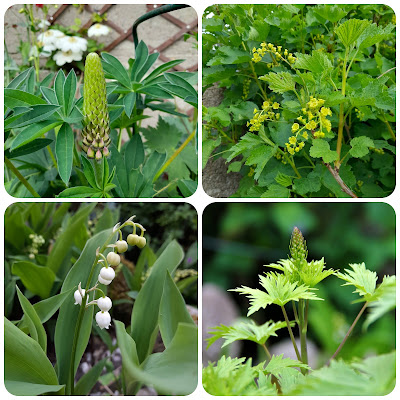 Back at home, I gave all the old pots in the garden a generous helping of organic feed, inspecting the garden's progress while I was out.
The first of the Lupines - a success story from last year - were showing some colour (top left) while there were plenty of promising flower spikes in our Delphinium (bottom right). There will be a glut of white currants (top right) as usual, although I suspect they will be at their best while we're on holiday and will therefore get eaten by the greedy wood pigeons.
We inherited a patch of Lily-of-the-Valley with the garden and it seems to be a good year for them.
They are called Meiklokjes (transl. May bells) in Flemish, and it's a tradition here (and in France) to give a small posy to someone you love on the 1st of May.  Apparently, the French King Charles IX was given a bouquet of these highly scented flowers on the 1st of May 1561 to wish him luck and prosperity in the coming year. He is said to have been so taken with the idea that he made it a custom to give all the ladies at his court a bouquet of Muguets, to give them their French name, on the 1st of May of each year. 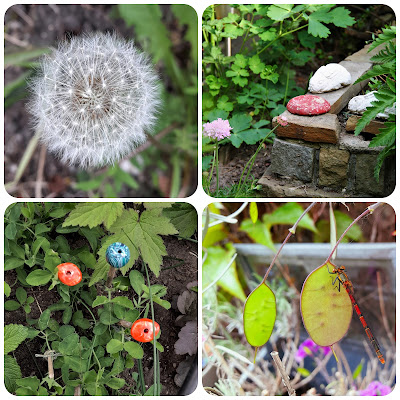 As you can see from the photo on the top left, No Weed May is a great success!
I'd planted out some Sweet Peas the other week, but as they weren't tall enough to tie them to the obelisk they are meant to grow up, I gave them a helping hand with some wooden sticks, which for safety's sake I topped with beads saved from broken necklaces.
Oh, and look: our Honesty seed heads have got a visitor, who was kind enough to pose for me! 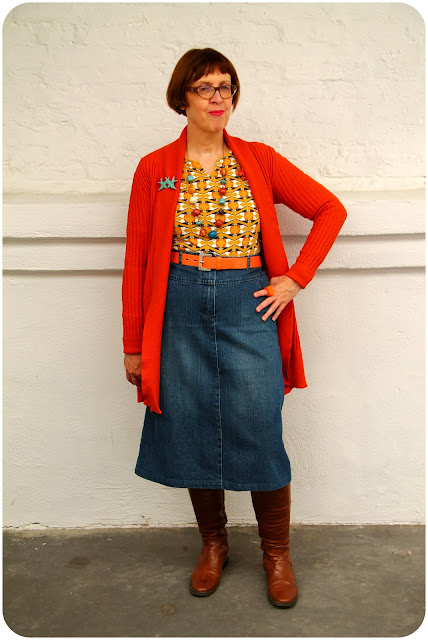 Saturday's weather was another mixed bag of sunny spells and clouds, the latter promising but never delivering a well-needed shower.
At 13°C, it was actually chilly enough to exchange the lightweight cardigan I was originally wearing for this chunky knit orange one.
As I wanted to participate in the May issue of Nancy's  Good buy/Good-bye Book and the month's theme will be bird prints, I dug out this charity shopped long-sleeved top as my contribution. I will update the link to the correct post once it's up. 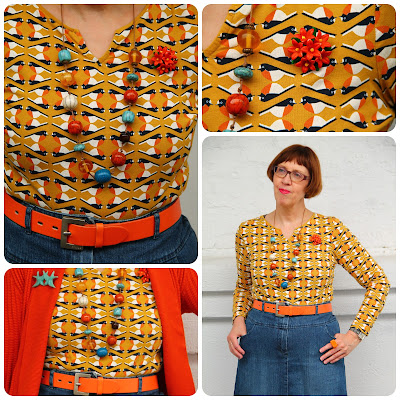 At first sight, you could be forgiven for thinking that it's some kind of psychedelic geometrical pattern you're looking at, but look again from up close, and there they are! Isn't it clever?
I wore the top with the denim midi skirt, another holy grail I finally found at Oxfam in October 2020, and added plenty of orange to tie in with the orange-breasted birds. For good measure, I added more birds by pinning one of my beloved birds-in-flight brooches to my cardigan. 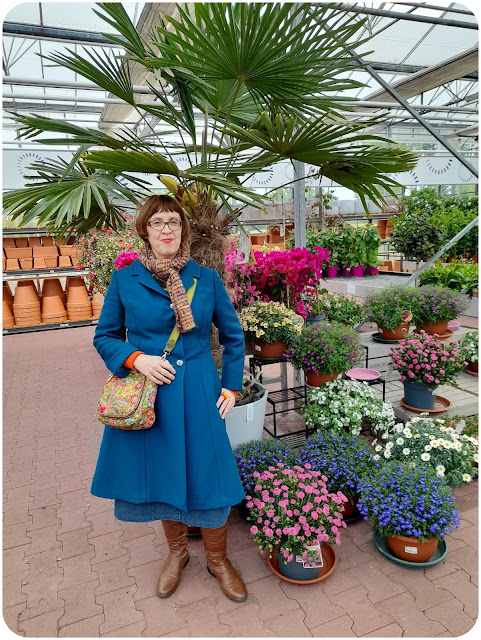 After lunch, we paid the gardening centre another visit and bought some shade-loving perennials for the window box in the passageway and a Clematis tangutica, which has yellow nodding bell shaped flowers from July to October, followed by fantastic seed heads, to replace the deceased Honeysuckle at the end of the courtyard.
A couple of pots of annuals surreptitiously ended up in our trolley as well.
Sunday morning saw me finishing the main part of my wardrobe changeover, with Jos helping me vacuum the bags of Winter clothes and put them in his grandparents' linen chest. Only the coats and the shoes to do now! 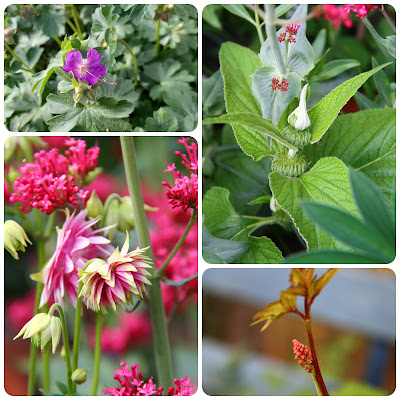 It was a gorgeously sunny day, so I was out in the garden in the afternoon, doing some chores and generally taking stock, with the sun warming my back. It definitely felt warmer than the 15°C indicated by the thermometer and in our sheltered garden it probably was.
Same as seeing my old favourites emerge when I'm doing my wardrobe switch, it's always a delight to see the garden stalwarts burst into bloom once more.
Small magenta flowers are dotted among the foliage of our ground-covering Geranium sanguineum (top left) and the first of the petticoated Aquilegias "Nora Barlow"are competing successfully with the Red Valerian it is sharing space with. We've had these pretty frilly flowers for almost twenty years and they keep popping up in the most unexpected of places. It seems to be a good year for them as well.
One of the potted Astilbes in the passageway (bottom right) has produced a tiny flower spike and the as yet to flower Phlomis russeliana (top right) I planted two years ago has finally been spurred into action. 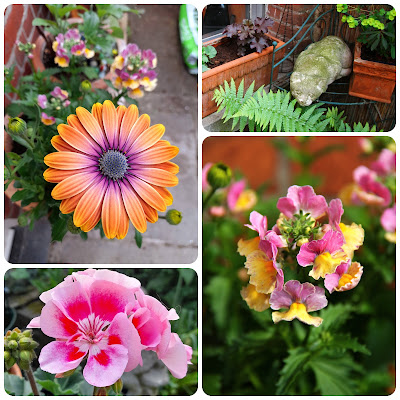 I planted up everything we brought back from the garden centre except for the Clematis, whose recently vacated designated space needs some prep before we can do so. As you can see in the below photo, it is already getting used to its future spot.
Apart from the ubiquitous Pelargoniums, we brought back pots of Osteospermum "Purple Sun" (top left and Nemesia "Banana Swirl" (bottom right), which are now living in perfect harmony in a big terracotta pot on our plant table under the awning. 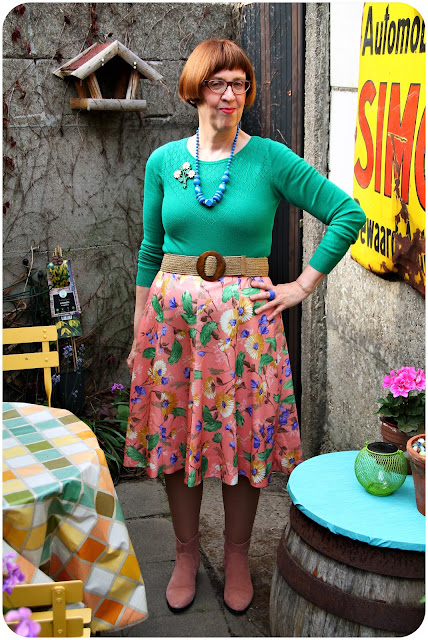 And yes, I was wearing a skirt for three days in a row. This time, it was the turn of this peachy pink one scattered with yellow, blue and green flowers, found at Think Twice many moons ago.
The green thin knit jumper with its diamond patterned yoke was a charity shop find almost exactly a year ago. My brooch, a posy of pale pink flowers, is modern and bought from a small independent shop near my office in Antwerp. I wore one of my stretchy belts, and added a blue beaded necklace and ring.
My peachy pink suede ankle boots are from New Look, bought at their closing down sale in Antwerp a couple of years ago. 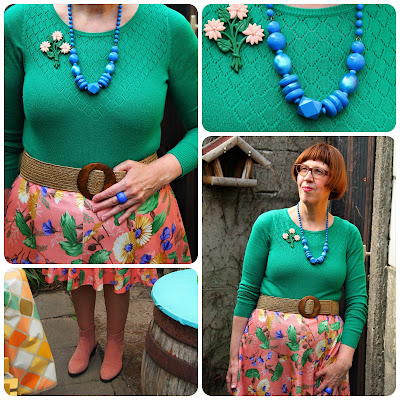 I'm leaving you now with a view of Dove Cottage's handkerchief sized garden taken from just outside the back door.
The sense of height is provided by the fact that I was standing on a chair to water the pots of pansies and strawberries hanging from the awning.
There's a tiny pond  in the foreground and behind the unruly Cotoneaster with its nondescript flowers beloved by bees of all kinds, is a small sunken area. Behind that is a border which goes all the way up to the paved area in front of the bench. That's our Spirea shrub, sorely in need of a haircut, partially hiding the bench from sight. 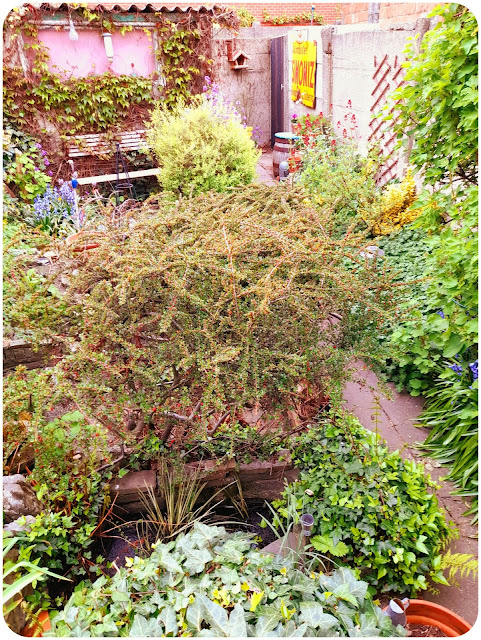 On the bottom right side of the path you can just catch a glimpse of our giant white currant bush, with the ground-covering geranium sanguineum behind it, followed by a mixed border now ruled over by Red Valerian, Lupines and Aquilegia "Nora Barlow". Behind that is our tiny but grandly named courtyard.
Obviously, this just captures a moment in time, and the garden is looking quite a bit different now, less than two weeks later.
And that's it from Dove Cottage for now! Hope to see you again soon!
Posted by Polyester Princess at 19:23