May definitely put her glad rags on in her second week, with temperatures in the low twenties and lots of sunny spells. The mild mornings even prompted me to leave the house bare-legged, ditching the  nude nylons, scorned by many, for the first time this year.

Work had been rather slow so I lingered a bit longer during my lunch break wanderings. I might even have made a couple of naughty purchases. Naughty, as in new rather than second hand. Not feeling too guilty though as the vast majority of my wardrobe remains either vintage or second hand. Sometimes needs must, though, especially as Think Twice has been a bit of a disappointment lately. But more about my purchases later! 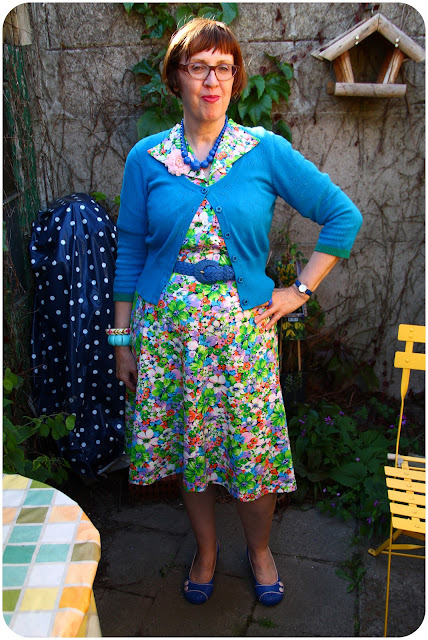 Although the temperature would eventually reach 20°C on Friday the 13th, it was overcast and a bit blustery when we set off on our weekly charity shop trawl after breakfast. I'd been quite optimistic and left the house wearing just this blue cropped cardigan as an extra layer. I soon regretted not wearing a coat, particularly when we were in the second shop we visited, which had its warehouse doors open for ventilation, creating a goosebump inducing draught. 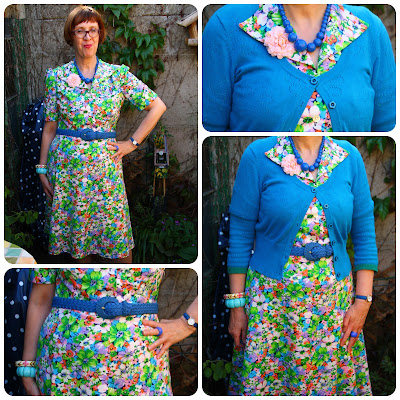 As I've been wearing a lot of skirts lately, my collection of vintage dresses has been somewhat neglected, the rail of cheerfully patterned frocks giving me reproachful looks whenever I open my wardrobe. So, here's a classic Ann outfit, based around one of my favourites, this 1970s does 1940s floral delight.
From its multiple colours, I picked blue for the rest of my outfit and accessories, including the aforementioned cardigan. Apart from the pink flower corsage I pinned to the latter, as well as my blue ring, everything was charity shopped or found on various flea markets. Yes, the blue slingbacks, which are by Miz Mooz, are second hand as well. They were a very lucky € 4 charity shop find back in September 2018! 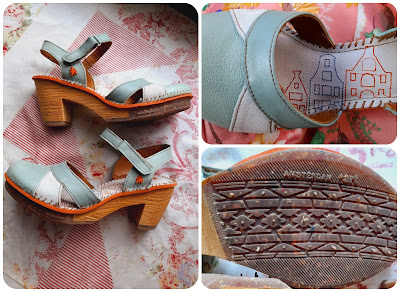 Our rummaging fix at Oxfam and our most local charity shop yielded a couple of Summer tops, some books and a cute little lamp, as well as another item I can't divulge here as the person it is supposed to be a gift for might well be reading my blog.
But before I show you my finds, here's the first of that week's naughty buys.
Recently an outlet shop selling shoes at greatly reduced prices has popped up in the small shopping centre near my office. I often take a shortcut through there and, on Tuesday, having some time to spare before I had to return to the office, I thought I'd suss things out. Well, what can I say but that I was unable to resist these quirky wooden soled beauties! They are by the Spanish ART label, and the model in question is called Amsterdam, with a row of typical Amsterdam houses stitched on the insole. They originally retailed at € 125 but they were mine for € 55.
What's more, they are ridiculously comfortable, as I wore them to the office and for a wander during lunch break the very next day without any problems whatsoever! 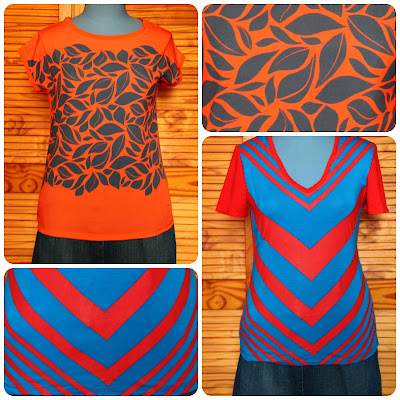 Now, back to the charity shops we go, and here's a roundup of the tops I found.
Both the orange one with its blue leafy pattern (above), and the burgundy and greyish green button through blouse (below) are by Liberty Island, a brand sold in a Belgian high street shop.
The red and blue chevron T-shirt (above) is by Belgian label Who's That Girl, while the red and white polka dot top (below) is from River Woods. 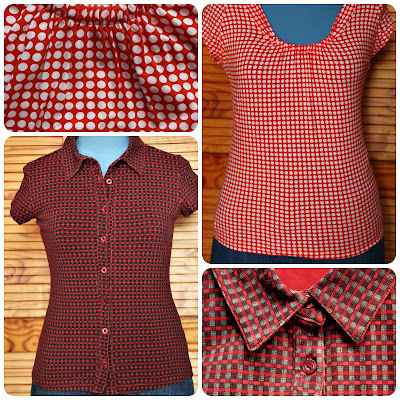 The day's star buy, however, was this little owl lamp. Standing only 16 cm tall, it was missing a light bulb, a replacement of which proved to be impossible to find due to its diminutive size. There was nothing for it but to replace its socket so that we could use a slightly larger lamp, by which time we'd spent more on replacement parts than we had on the lamp itself. No regrets though. He's super cute and his eyes are quite mesmerizing! 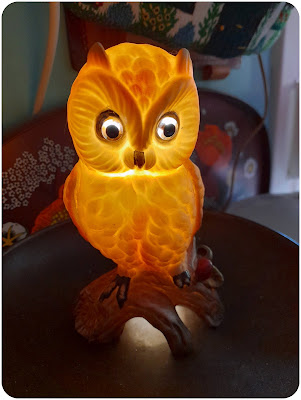 We were home in time for lunch, after which we drove to our local branch of  C&A, as Jos was in need of some new pairs of trousers. Mission accomplished, I spotted this fuchsia pink organic cotton blouse with the most exquisite embroidery on its balloon sleeves.
The perfect match for my second naughty lunch break buy, an organic cotton floral maxi skirt with two fuchsia pink crocheted lace strips at the hem. 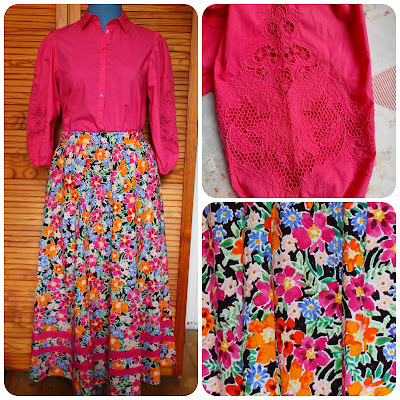 Wearing this, I would definitely blend in with this glorious pink corner of our garden, where Lupines, Red Valerian and Aquilegias are competing for First Prize.
Sadly, the Lupine's foliage is suffering from powdery mildew, which often happens as a result of a long spell of dry weather with infrequent watering. Apart from those plants who spend their lives in pots, or any new arrivals to the garden, I'm not in the habit of watering unless perhaps once in a while during a heatwave. Surely, water is far too precious to be used with abandon! 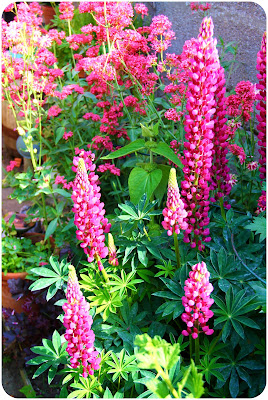 At the very least, the dry spell seemed to be keeping the slugs and snails at bay for the moment, although I was none too pleased to see a naughty pair of scarlet lily beetles on the remains of one of our precious Snakeshead Fritillaries!
The local population of bees, on the other hand, seem to relish a change of diet, and often dart over from the Cotoneaster bush for their fill of Lupine nectar. 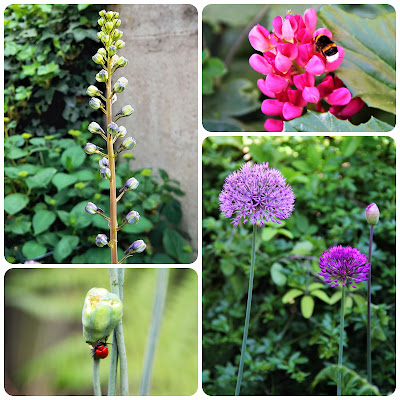 I started Saturday by doing a shoe changeover, putting away most of my boots in favour of Summer shoes and sandals. At the same time, I took the opportunity to do a major cull of all those shoes my feet no longer agreed with, filling a total of three bags to be taken to the charity shops. 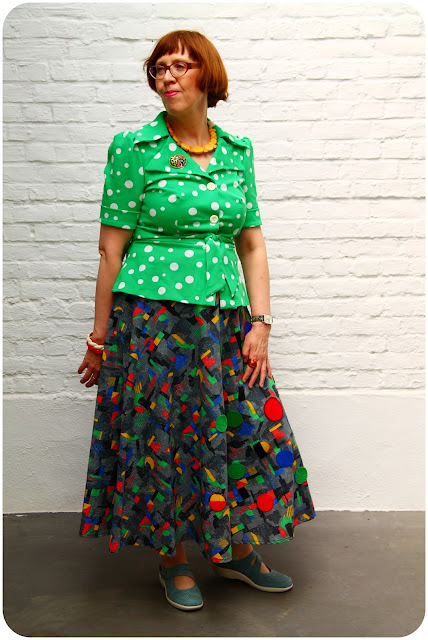 The weather gods treated us to another sunny day and, with Friday's wind having taken a backseat, the 22°C shown on the thermometer felt deliciously warm.
Charity shopped in December 2019, the skirt is somebody's quirky handiwork, with a visible red side zipper and featuring random felt circles and patches of visible stitching. With its sturdy cotton fabric and its midi length it is an absolutely joy to wear, making me crave more skirts in the same vein. 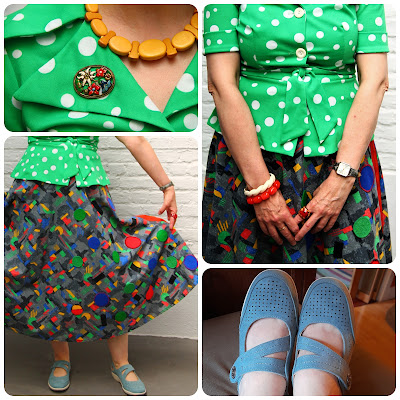 Its companion that day was a vintagegeen and white polka dot blouse with a peplum and attached tie belt. A vintage Edelweiss, Poppy and Cornflower brooch, charity shopped yellow wooden Les Cordes necklace, ivory coloured bangle and red bracelet and ring were the accessories of the day.
Oh, and I might have found an alternative to my red Clarks Cloudsteppers in these blue shoes from a comfort shoe brand called Ladyflex. 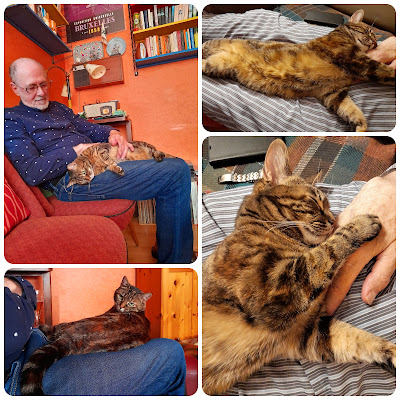 Saturday afternoon saw us driving down to the garden centre for some annuals and to the DIY store for replacement parts to fix the owl lamp.
Then, while Jos was lavishing some TLC on the owl, I took an armful of wrinkled clothes downstairs to do a much needed spot of ironing. Annoyingly, my steam generator iron seemed to have run out of steam and refused service so that I  had to use my old enemy, the steam iron, instead.
Meanwhile, Bess has taken another big step and now loves climbing onto Jos's lap at every opportunity. She's been trying out my lap as well, but I guess I'm too fidgety for her liking. 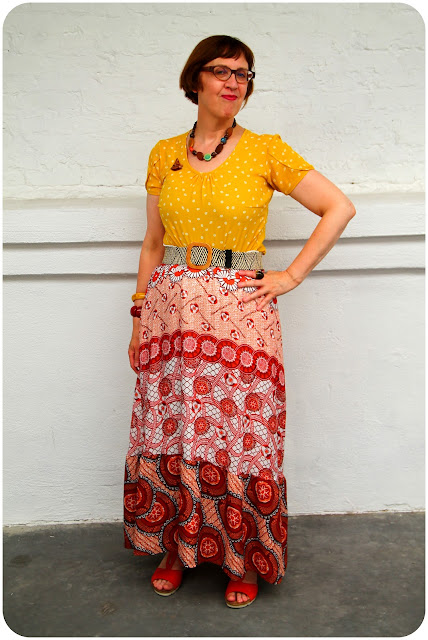 The mercury gleefully climbed to 26°C on Sunday and although the sun definitely didn't need a helping hand I dressed in sunny yellows and oranges.
Both the groovilicious tiered maxi skirt and the yellow blouse with its tiny leaf print were last year's charity shop finds. One of my stretchy chevron patterned belts came out to play as well. Both the necklace and the boat brooch were flea market finds, while the charity shops provided the red bracelet and yellow Bakelite bangle. My tomato red sandals were a sales bargain in the Summer of 2020. 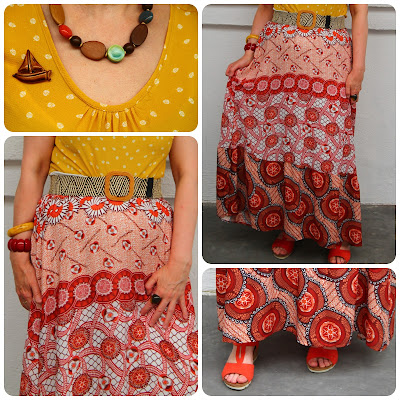 After breakfast, I put on my gardening apron and gloves and went into the garden to plant up the annuals we'd brought back from the garden centre.
These included some pink Argyranthemums (top right) as well as a selection of Calibrachoa (Million Bells) and cheerful yellow Sanvitalia to make up a hanging basket. 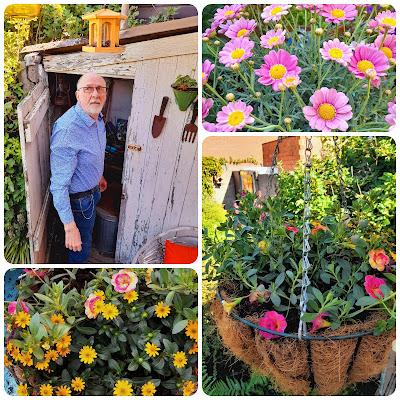 That's our rickety potting shed on the top left, with Jos not wearing his pink shirt for once.
We also added to the passageway jungle with a couple of pots of shade-tolerant Lobelias.
It's such a lush green space out there and a lovely sight to greet us whenever we look out of the kitchen window. 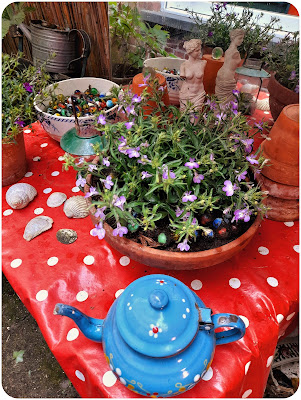 So, that's another weekend done and dusted. Do join me again for more of May's pleasures - guilty or otherwise - in a couple of days!