Lately, my procrastination habits have been getting the better of me, as even with only a 4-day working week followed by a 3-day weekend, things only get ticked off from my to-do list at a snail's pace.

It isn't the first time that I'm left wondering how I ever fit both fun things and the inevitable chores into a 2-day weekend and have time for blogging on a regular basis too.

Never mind that my blog is lagging behind real life as usual, this time I only just started writing this post, its subject matter dating from over a week ago, as yet another weekend was drawing to its close. It's nothing short of a miracle that I managed to finish and publish it on Monday! 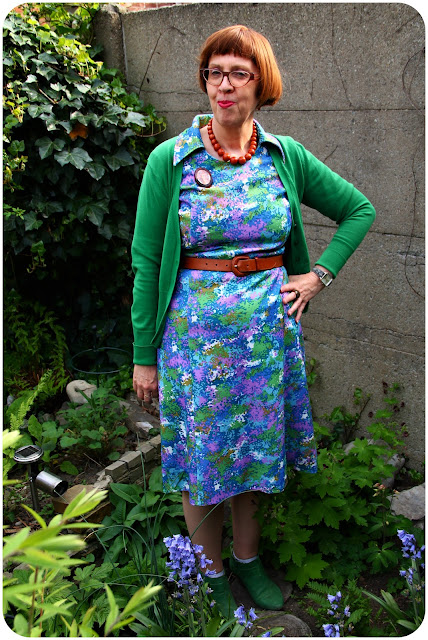 So, let's get our skates on and step into that time machine once more, alighting on Thursday the 5th of May at the end of another sun-drenched day.
It had been a busy one at the office, so forgive me if I'm looking a bit dishevelled, but I was determined to show you the outfit I was wearing that day.
This short-sleeved vintage frock, with its Springlike green, blue, lilac and pink watercolour print, round neckline and dagger collar, definitely isn't making its debut here. 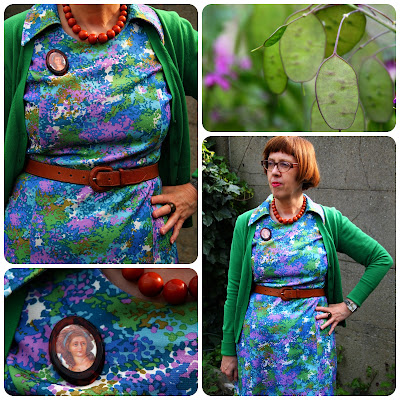 Apparently, it didn't leave my wardrobe at all last year, but funnily enough, the last time it did, almost exactly two years ago to the date, I was wearing it with the same belt, a favourite tan leather one.
At least, and much to my relief, the rest of my accessories were different this time: I added a beaded necklace in the same colour as the belt and a faux-tortoiseshell rimmed brooch framing the portrait of a red-haired lady. With the temperature stuck in the mid-teens, I wore a green cardigan on top and took the opportunity to wear my beloved green suede ankle boots again, with my socklets playing peek-a-boo! 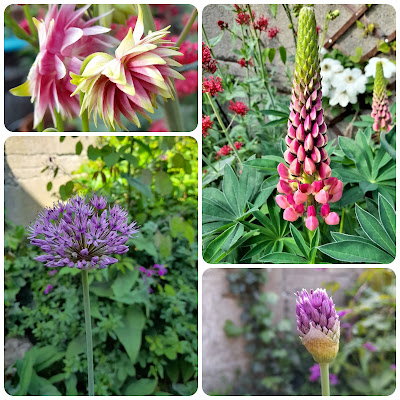 Pinks and lilacs galore in our little plot as well, the first represented by my beloved Aquilegias "Nora Barlow", which are popping up all over the place, and the developing two-tone pink flower spikes of Lupinus "My Castle".
As always, it's a delight to see the lilac globes of Allium "Purple Sensation" burst out of their skins, which they seem to be doing with gusto! 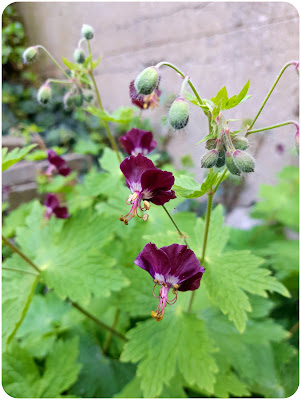 I tend to ooh and aah over many a flower, but in the end it are often the less showy ones which steal my heart. Case in point are the flowers beloning to Geranium phaeum.  Also known as dusky crane's-bill, mourning widow or black widow, its crinkly edged dusky purple petals turn backwards to show its conspicuous projecting stamens and style.
We have a small self-seeded one which had made a crack in the paving its home, but we planted a new specimen last year (see below, bottom right) which seems to be in fine fettle. 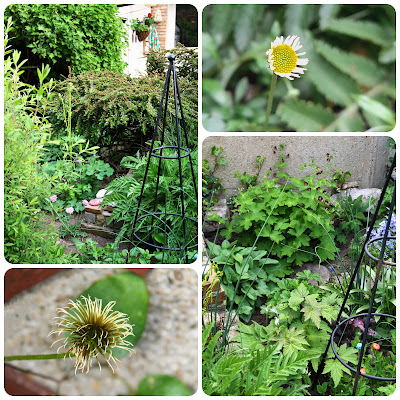 And all the time, flowers come and go, in a seemingly never-ending cycle.
We waved goodbye to our Clematis "Guernsey Cream" blooms, which have now all turned into gorgeous seed-heads, and said hello to the first of the little daisy-like flowers of Erigeron 'karvinskianus', better known as Mexican fleabane (top right). 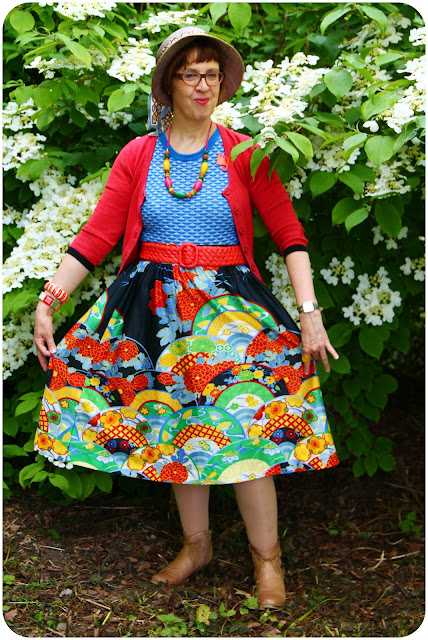 Initially overcast and slightly foggy, it started clearing up by midday on Friday the 6th of May, the mercury eventually climbing to 21°C.
After breakfast, we made sandwiches before embarking on our usual Friday charity shop trawl.
In between shops, we stopped off at the park in Duffel for a picnic, returning to the park for a stroll after our rummage at the second shop. 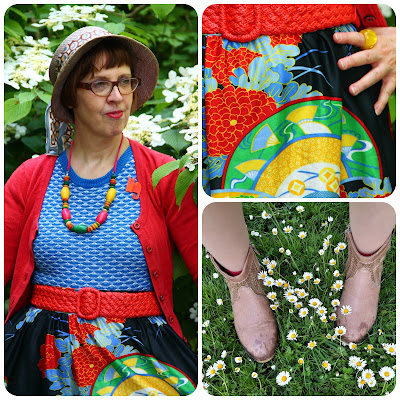 My skirt, a Think Twice find in February 2020, is another item which hadn't seen the light of day since that fateful year's first lockdown. It has the most glorious pattern, once likened by someone to a display of colourful plates. With plenty of colours to choose from, I went for blue for my short-sleeved cotton jumper and red for my woven belt, cat brooch and three-quarter sleeved cropped cardigan.
My wooden beaded necklace has all the colours, plus pink, and I was wearing a yellow perspex ring.
To trample among the carpet of daisies, I was wearing my old oatmeal wicker panelled ankle boots. They have seen better times, but I simply cannot say goodbye to them, so I'm letting them live out their lives by wearing them for Spring and early Summer walks in the park. Ah, isn't this a sight for sore eyes? All those fresh Spring greens, a lawn full of daisies and a cloudless blue sky. 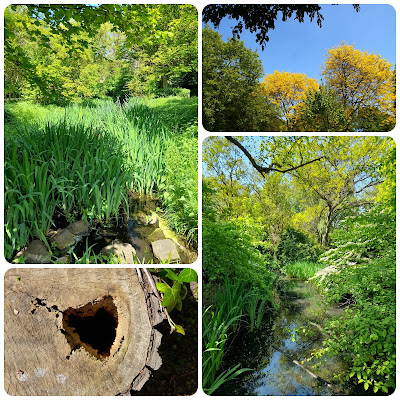 The brook was bordered by dense and lush vegetation, which was almost obliterating it from view. By the looks of it, there will be plenty of yellow flag Irises soon, their gently nodding heads thought to be the inspiration for the fleur-de-lis symbol.
And oh look! I loved how that tree stump had developed a heart shaped hole!
Frogs could be heard but not seen, then stopped their croaking once I stepped onto the wooden bridge crossing the brook. 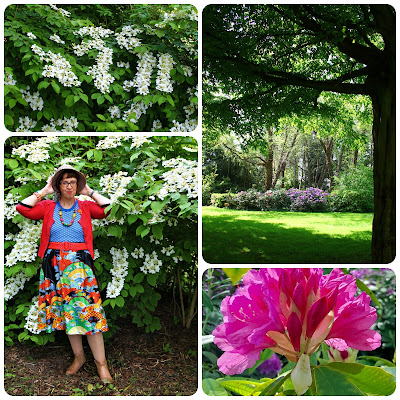 The white lacecap flowers of Viburnum plicatum were providing the perfect backdrop for my outfit. If they were trying to steal the show, they were outnumbered and defeated by the banks of differently coloured Rhododendrons which are the park's major attraction this time of year. 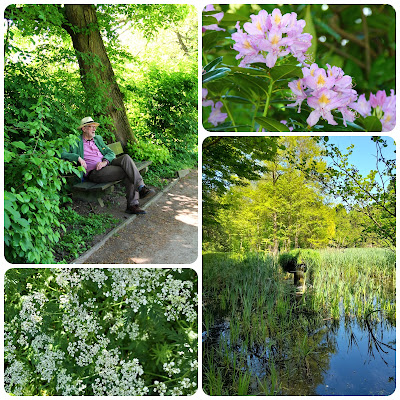 While Jos rested his feet and sat contemplating life on a bench, I continued my explorations, meeting flowering Elderbery bushes and pale pink Rhododendron blooms.
The tinkling stone fountain too can be heard rather than seen as yet another season's layer of lush growth is putting in its two pennies worth in hiding it from view (bottom right).
For those who are wondering, Jos does have other shirts than the pink Chambray one, it just happens to be his current favourite :-)
Another frog chorus erupted from the pond which is hidden behind the undergrowth. At least these ones had the decency not to stop their ribitting upon my approach! 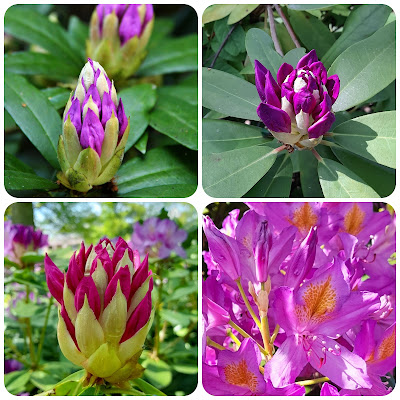 I took the time to stand and stare at nature's bounty, and the various stages of the developing Rhododendron flower buds in particular, their tips dipped into the brightest of paints.
These majestic shrubs with their spectacular flowers always make me think of the Rhododendrons which stood fifty feet high along the abandoned drive to Manderley in Daphne du Maurier's Rebecca. One of my favourite books which I think is long overdue a reread. 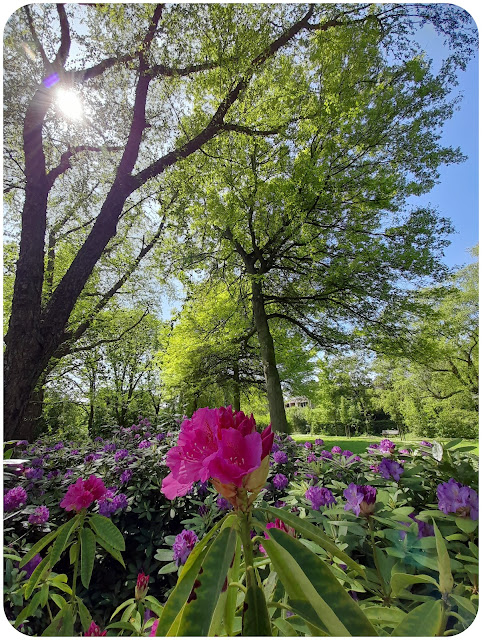 Fifty feet high they may not be here in this humble park. No, they are firmly kept in check, allowed to spread horizontally rather than climb to such unimaginable heights.
At one point I was faced with a sea of fuchsia pink and lavender blooms growing in dappled shade, the prima ballerina at the front spotlighted by a ray of sunshine which had managed to pierce itself through the canopy. 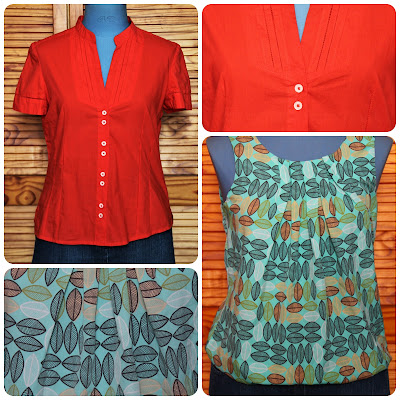 Now, without further ado, let me show you my bounty, the majority of which was found in the shop near the park.
This time of year makes me scour the rails for breezy Summer tops. The orange cotton one is by Gigue, while the aqua leaf-patterned one is by the Belgian Vila Joy label, and both are welcome additions to my Summer wardrobe. 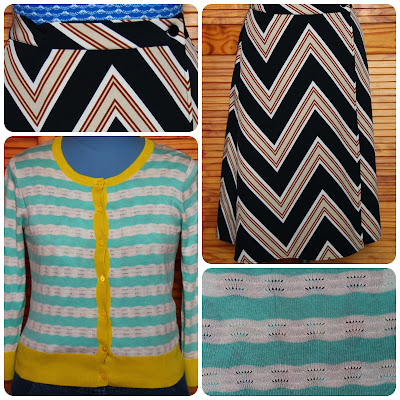 I fell head over heels for the chevron patterned wrap skirt, which originates from JBC, a Belgian high street shop, while the aqua and white striped and yellow bordered cardigan is bound to become a Summer staple. 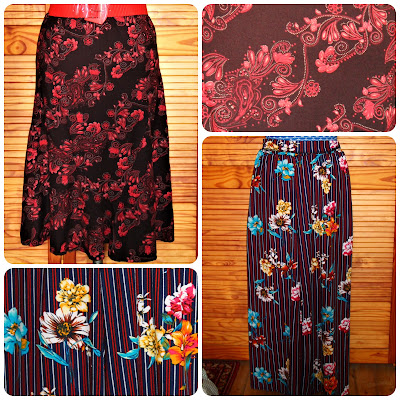 I initially dithered over the brown skirt with its Paisley-esque pattern in shades of coral and orange, until I took it to the fitting rooms and loved how it looked on me. Due to its strong Autumnal vibes, however, I don't think you will see me wearing it on the blog anytime soon.
Finally, the striped and floral pair of palazzos, which was my only find in the first shop we visited. For once, they are the perfect length on me, so that there's no need to add hemming them  to my to-do list!
See you again soon!
Posted by Polyester Princess at 19:14