All is quiet on New Year's Day

New Year's Day dawned and it was eerily quiet outside. As we had been up past midnight, just to sit out the fireworks going off left, right and centre, we'd slept a bit later than usual, but otherwise it was just an ordinary Saturday for us.

We tiptoed downstairs for fear of waking up the sleeping world. Nevertheless, we put on the radio and loaded the washing machine just like we always do on a Saturday morning. After all, nothing had changed since we'd closed our eyes and drifted off. The world hadn't been magically transformed into a virus-free one overnight. At least, they didn't mention it on the news!

For once, though, we didn't need our daylight therapy lamp to tide us over breakfast. As we'd tentatively lifted a corner of our bedroom curtains, a pale blue sky floating with marshmallow clouds had greeted us. Drawing them wide, we could even detect the rays of a waking sun. 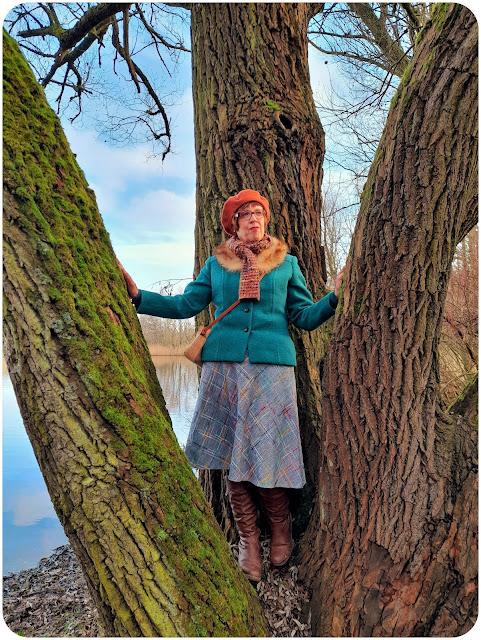 We'd been making attempts to go for a longer walk in one of our favourite nature reserves all week but all had been thwarted by the weather. In fact, it looked as if this day would be the first one in a long time when those godforsaken weather gods didn't have rain in store for us. Plus, at 15°C, it was so mild that it might as well have been an early Spring day.
I didn't even need that many layers. The green jacket, in spite of its faux fur collar, is only a moderately warm one, and so is my thin knit brown speckled scarf. I could have gone bareheaded, but wore my charity shopped Burberry beret as I'm a creature of habit.
My only concession to the relative wildness of our destination was my old pair of fleece-lined brown boots to tackle the undoubtedly muddy paths. 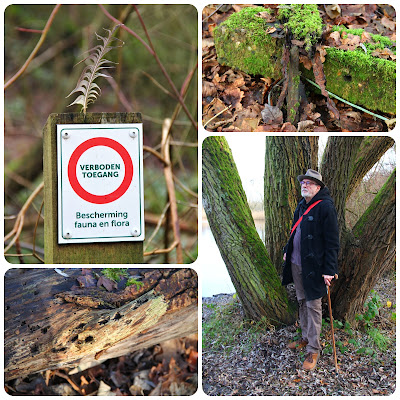 Those of you who have been reading my blog for a while might remember this particular nature reserve from previous visits. In fact, I've mentioned it in no less than 7 blog posts since having rediscovered the area in the Summer of 2020.
At a mere 20-minute drive from Dove Cottage, the reserve, which goes by the name of Walenhoek, is the perfect choice for sampling some fresh air and the delights of nature whatever the season. 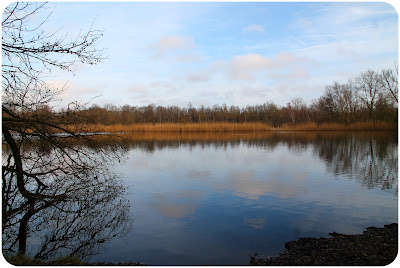 There were only two other cars in the car park, both apparently belonging to dog walkers making use of the adjacent, fenced off dog area.While dogs are obviously allowed in the reserve itself, they have to be kept on a lead at all times to protect the resident wildlife.
Apart from a handful of early birds like us we had the place virtually to ourselves so that we could immerse ourselves in its soul soothing solitude, the quietness only pierced by bird calls and the hypnotic, distant  rumbling of a train passing by on the track just beyond the domain. 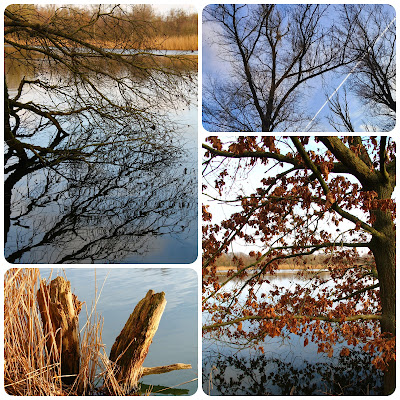 There used to be clay pits here belonging to one of the area's many brickmaking factories. After the industry collapsed in the 1970s, it was reclaimed by nature and the traces of centuries of exploitation by man all but erased by its almighty force.
Today, the reserve comprises 60 hectares and offers a delightfully varied landscape of large ponds and pools bordered by reed beds and dense thickets through which a myriad of footpaths wind their way. 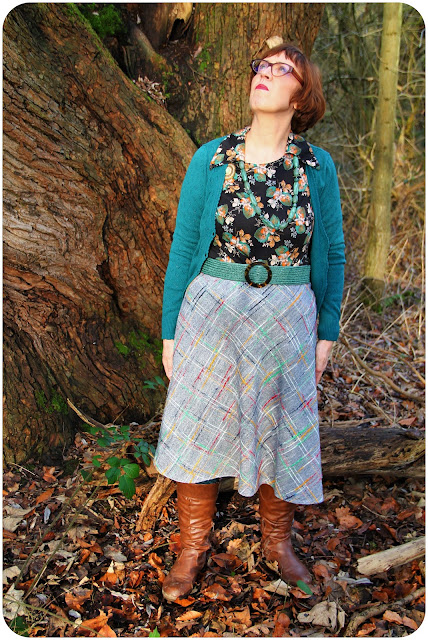 It was balmy enough to remove my jacket and show you what I was wearing underneath.
You've already caught a glimpse of my grey woollen skirt criss crossed with woven diagonals in red, green, yellow, black and white, which has been gracing my wardrobe for many years.
The blouse is another one which I reclaimed from the bottom of one of my flea market boxes and no, I honestly haven't got a clue what it was doing there. It was a delight to wear, so it's not going anywhere anytime soon. My teal cardigan is one of my charity shopped heart patterned King Louie's. 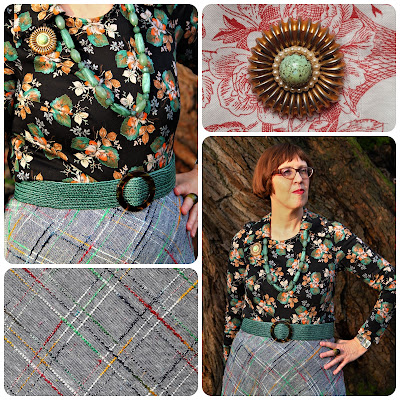 Both the green stretchy belt and the green beaded necklace were retail buys which have earned their place in my wardrobe over time.
The brooch, with its green mottled stone set in a circle of tiny pearls, was bought from the Brooch Lady at an antiques fair in April 2017. 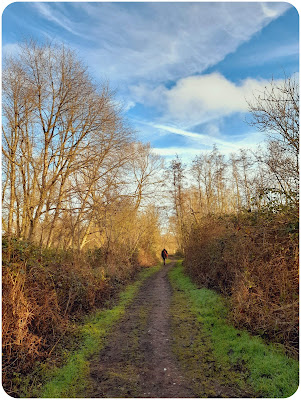 Although we'd walked this path countless of times, we only noticed the battery of bird feeders offering a plethora of delicacies last April, when it was being raided by a pair of cheeky squirrels.
Sure enough, there was one of the bushy tailed creatures squirreling away its fill of nuts as we passed by. What's more, he or she didn't even bat en eyelid when I tiptoed ever closer to take its picture! 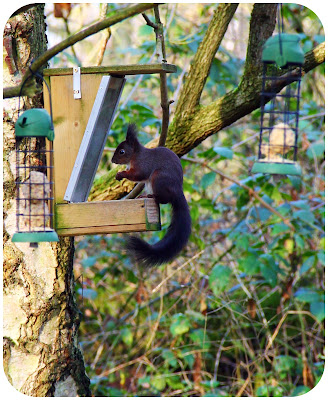 The reserve is dotted with the crumbling remnants of the former brickmaking factory, such as the old electricity cabin (below, top right), its former use given away by a danger of death warning sign.
It's almost beyond belief that less than half a century ago this place was a bustling hive of activity. 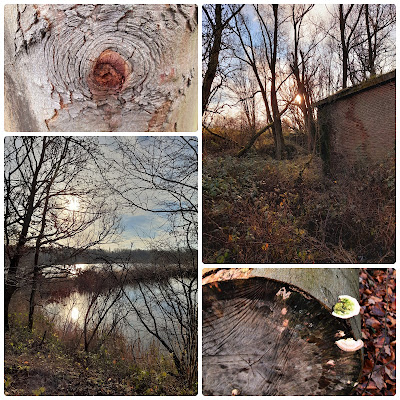 We'd brought a picnic, as we often do, and took some time looking for a suitable sun-drenched bench, eventually deciding on one with a view across the largest of the ponds.
Here, we were dazzled by the low Winter sun which had joined forces with its reflection.
I was just in time to grab my camera and catch one of the trains whizzing by, an elongated, quick-as-lightning blur of red and white (below, bottom right). 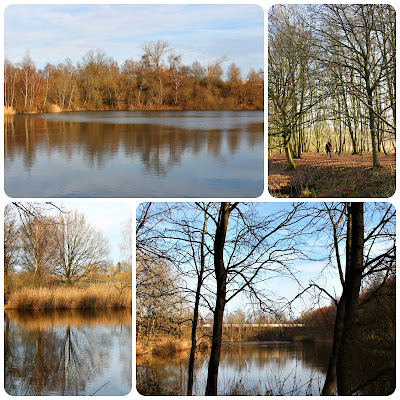 Hunger pangs satisfied, we continued on our way when, just before taking a final turn to the tree-lined path which would take us back to the car park, we spotted the slats of a wooden garden chair among the trees.
Gingerly making our way towards it without being tripped up by treacherous brambles, we noticed that it wasn't a case of fly-tipping. In fact, it was a rather fancy one in perfect condition, which was tied to a tree trunk with a piece of rope. Clearly, this was someone's secret hideaway. Not so secret now, obviously, but I suppose it would be completely hidden by an exuberance of foliage in Summer. 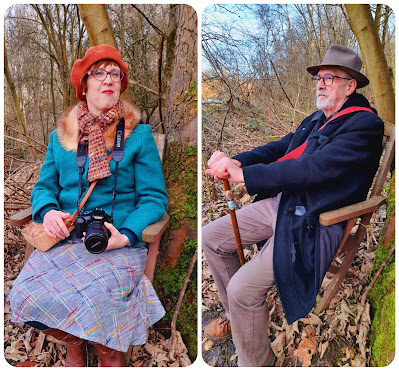 With a view like that, I can imagine sitting and staring here for hours! 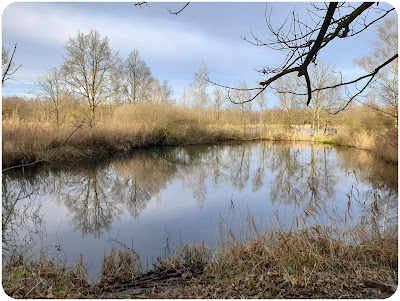 My depleted energy levels somewhat recharged, I decided to strike the iron while it was hot when we got home. I finally ventured into the garden and removed the slimy remains of the Nasturtiums, which hadn't yet been cleared as they'd been producing flowers only a couple of weeks ago.
What with all the wetness, and sunny days occurring almost exclusively while I am stuck at the office,  the garden has been somewhat neglected, which means I'll have my work cut out come Spring! 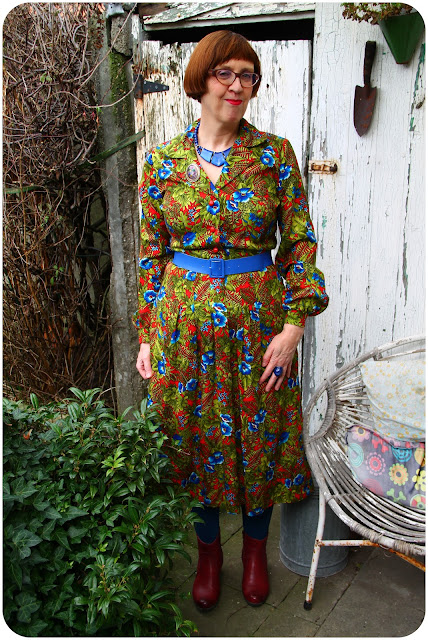 The sun had upped and left us again on Sunday, the grey sky reflecting my mood. To say that I wasn't looking forward to going back to the office on Monday is quite an understatement.
Nevertheless, I tried to cheer myself up by wearing colour, and lots of it. I thought it was time this dress got another outing. A sales bargain from Think Twice in the Autumn of 2019, I fell head over heels for its jungly flower and foliage pattern. However, it initially took me a while to wear it because of its plethora of split seams and its zipper, which needed to be fixed. 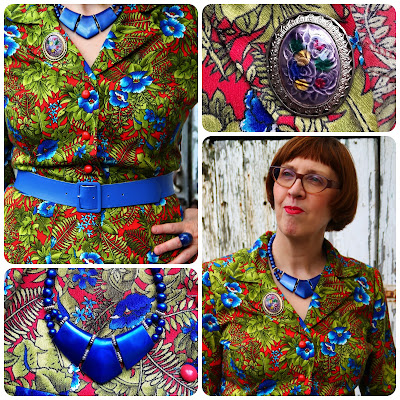 Taking the lead from the cobalt blue flowers, I added a belt, necklace and ring in the same colour.
Although picked up at a flea market ages ago, it was the necklace's first wear. I've certainly been discovering hidden treasures now that I've culled my tangled jumble of necklaces!
My final accessory was the brooch with its bouquet of sparkly flowers - the odd cobalt blue one among them - on a purple background.
The Christmas break now being well and truly over, it will be business as usual in my next post. Please make sure to stay safe until then!
Posted by Polyester Princess at 19:06