Hello, and welcome to the second episode of this year's West country travelogue.

It was Monday the 6th of September and, after a restful night, we'd woken up to the first proper day of our little holiday. Another blue-skied and sunny day had been forecasted, with temperatures which were expected to climb steadily towards the high twenties.

Drawing the curtains of Marjolein's French windows leading to its balcony, the sight that greeted us was as magical as ever, the view across the lake and the patchwork of fields gently rolling towards the French-Flemish hills still managing to delight us after all those years. 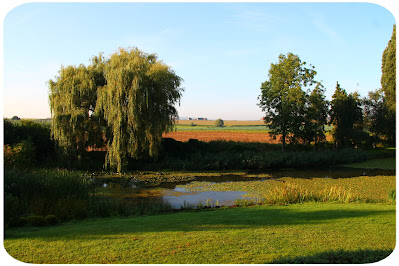 We'd brought essentials such as bread, butter and eggs with us, as well as the remaining perishables from our fridge at home, but in our haste we'd left the contents of our fruit basket behind. Therefore, instead of our usual fruit and yoghurt breakfast, we had a starter of berries with a dollop of yoghurt, followed by one of Jos's delicious omelettes and slices of bread and butter. Washed down with cups of strong coffee, obviously. 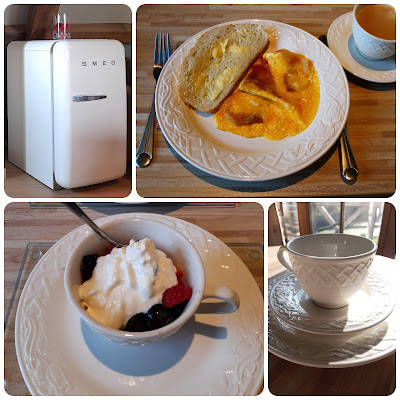 We hadn't made any definite plans for our holiday, letting our moods and the weather be the deciding factors each day instead. That morning, we got it in our heads to go abroad for the first time since the pandemic. This isn't in any way as far fetched as it seems, as the French border is less than six kilometer from our cottage! France, here we come!
So, we set the controls of Truus, our satnav, towards the charming little town of Cassel, a journey of less than half an hour. This wasn't exactly new territory for us, as we first visited the town back in 2017. But while Marie-Jeanne, our old satnav, took us along winding country lanes through tiny hamlets and fields ripe for harvest, Truus seemed to prefer busy main roads. These we followed until we passed the ghostly empty shell of the former border control building followed by the sight of an unusual church tower which halted us in our tracks. 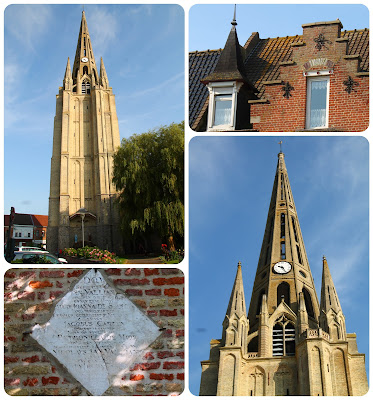 As we'd just passed a village sign, we knew we were in a little town called Steenvoorde which, in spite of being just across the French border, is a decidedly Flemish sounding name. And no wonder, as this area of present-day France was once part of the historical County of Flanders.

We decided to investigate, so we parked our car and walked into the direction of the church dedicated to St. Peter, its 92 meter spire guiding us like a beacon.

The church, whose origins date back to the 12th century, has had quite a turbulent history. It fell victim to Iconoclasm - in fact, it was here that the Dutch Revolt started in 1566 - and after being burned down and destroyed in the 16th and 17th centuries, it was rebuilt in the late Gothic style between 1660 and 1664. The tower is from 1712 and the spire was added in the late 19th century. After being badly damaged again in May 1940, the church was finally restored in 1950. 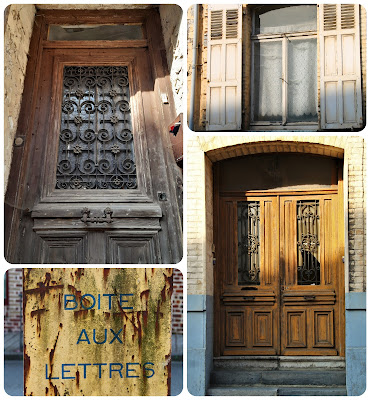 Making our way to what appeared to be the town's market square in search of a boulangerie in order to buy a baguette and some brioches, I was drawn like a moth to a flame to a rusty post box and a row of houses which appeared to be in a serious state of disrepair. This kind of delightful dilapidation seems to be par for the course in these parts. 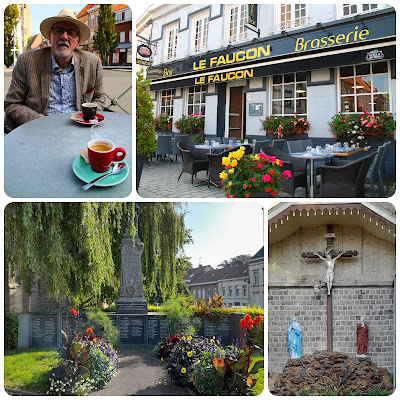 A friendly waitress was laying tables on the terrace of Brasserie Le Faucon, and after successfully scanning our Pass Sanitaire (vaccination certificate) we were allowed to sit down and enjoy un petit café before continuing our journey to Cassel. 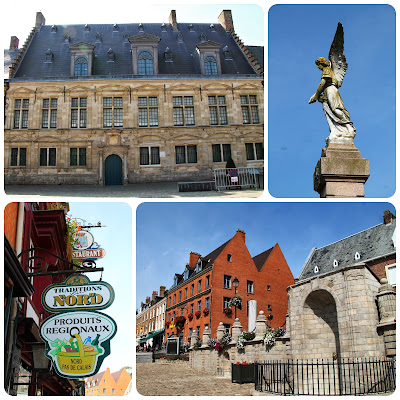 Lunchtime was approaching when we reached the town and by the time we'd parked our car in the last available spot in the free car park near the Grand' Place I remembered from our previous visit, our stomachs announced they could do with some fortification.

Spotting a couple of inviting terraces further along the Grand' Place we strolled into their direction and, after perusing the menus, selected Café-Brasserie A l'Hôtel de Ville. Judging from the office workers who joined us shortly afterwards, it was a local favourite. 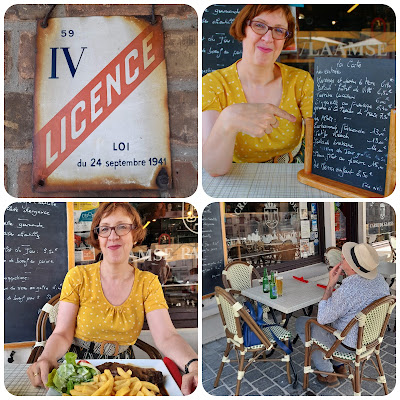 Again, our vaccination certificates were successfully scanned, after which we both ordered faux filet au poivre, which came accompanied by a salad and what I'm reluctantly calling French fries (as opposed to the correct Belgian fries) since we were in France.

We might have been drinking our usual alcohol free beers, but a rusty plaque announced that the place was granted the licence to sell alcohol and spirits in September 1940! 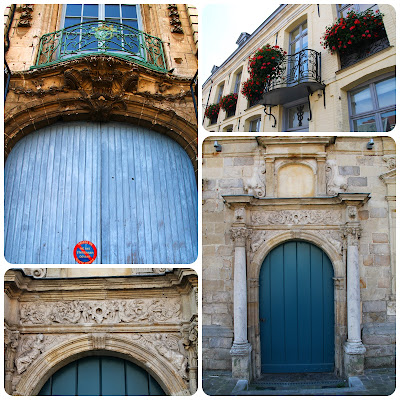 Hunger pangs satisfied, we briefly returned to our car as I'd forgotten my hat, after which we decided to once again attempt the town walk we did back in 2017.

The walk, which is waymarked by copper studs (below, bottom right) starts almost opposite the restaurant, in front of the Musée de Flandre, details of which you can admire in the above collage, bottom left and right. A photo of the stunning 17th century Flemish building can be seen in the first Cassel collage on the top left. 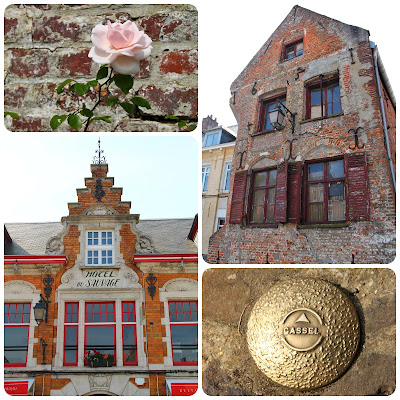 Originally established by the Romans on top of the 176 meter hill now known as Mont Cassel,  overlooking the lush rolling pastures of French Flanders, the small town is considered one of the most picturesque in the area. In fact, it was voted one of France's favourite village (Village Préferé des Français) in 2018.

From the Grand' Place, the walk climbs to the top of the hill by way of the Rue du Château, passing under the Porte du Château, or Castle Gate, a replica of the 17th century original.

However, Mr. and Mrs. Know-it-all preferred to take a different route. After all, we'd been here before. Never mind that we got a bit lost at the time ... 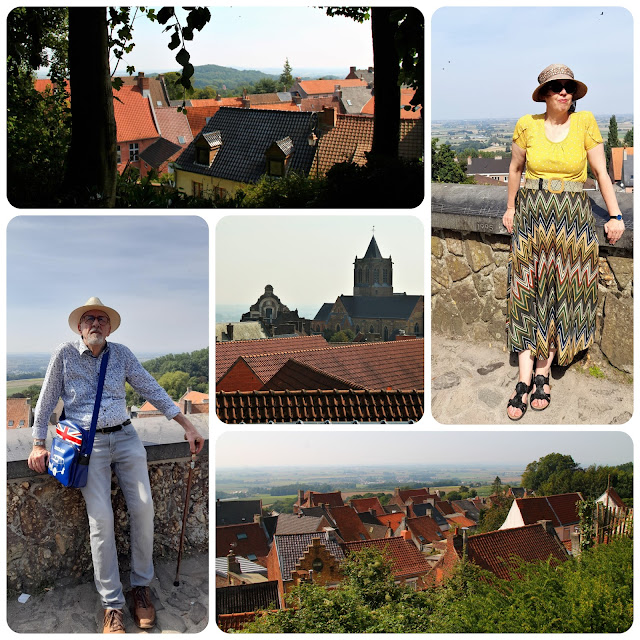 After a stiff climb upon a winding cobbled path, we eventually arrived on the summit, where a magnificent panorama of the town and surrounding countryside awaited us.

There's the Jesuit Chapel with the town's main church, Collégiale Notre Dame de la Crypte, on its right in the collage's central picture. We visited the church last time we were here. Now, it was partly covered in scaffolding, which I conveniently cropped out of the frame here. 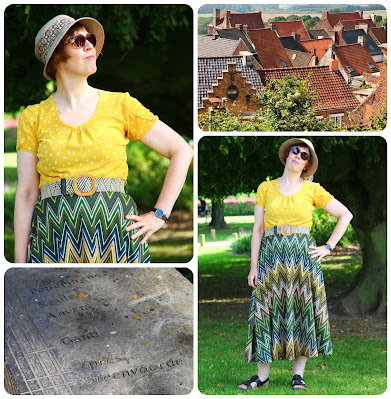 There are several viewpoints with orientation tables, this one pointing us not only into the direction of Steenvoorde, where we had our morning coffee, and Poperinge, but our hometown of Antwerp as well.

My outfit of the day was built around the recently charity shopped zig-zag patterned skirt which I combined with another recent charity shop find, a lightweight yellow top with a delicate leaf pattern, which had its origins in a high street shop. Both the belt - one of my beloved stretchy ones - and the sandals were retail buys, the latter picked up in the Clarks sales in a Shropshire town in June 2018. 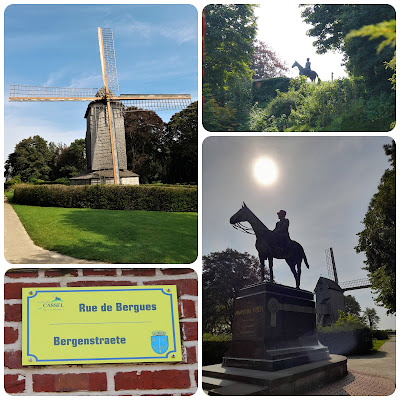 After admiring the attractions of Mont Cassel, the Casteelmeulen (Castle Mill, top left) and the equestrian monument of Marshall Foch (bottom right), who had his headquarters here during the Battle of Ypres, we took a path downhill to arrive on the sleepy Rue de Bergues. As you can see, the street signs are all bilingual, Bergenstraete being the local Flemish dialect. In the Flemish spoken by us at the other side of the border it would be Bergenstraat. 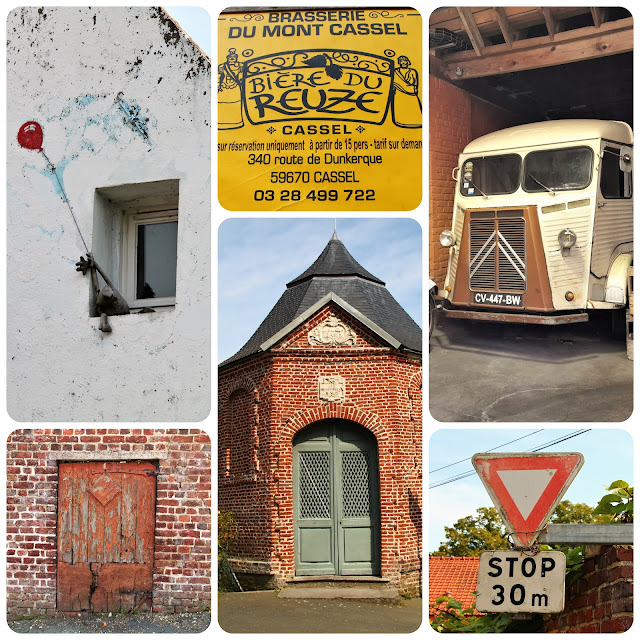 Just after the octagonal Horne Chapel we turned left and walked into the direction of the Rue de Dunkerque, where an open garage door allowed us a peek into the premises of the Mont Cassel brewery with its vintage Citroën delivery van.

At that point, it was only a matter of passing through the Porte de Dunkerque to arrive back at the car park, where we had a welcome break and another alcohol free beer on the terrace of the café on the corner. On our first visit, we'd parked our car directly opposite the café and had a coffee to get our bearings. At that time, we were both mesmerized and horrified by the old-fashioned sticky fly paper full of hapless victims hanging from one of the café's lighting fixtures. Admittedly, we were quite disappointed to see that this part of the decor had gone. 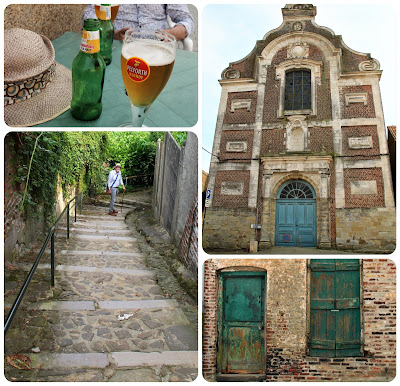 We might have been back at the car park, but that didn't mean our walk was finished. Suitably refreshed, we continued following the copper studs, pointing us into the direction of the Jesuit Chapel - and other cases of delightful dilapidation - and the Chemin du Chapitre, with its steps taking us down another level. 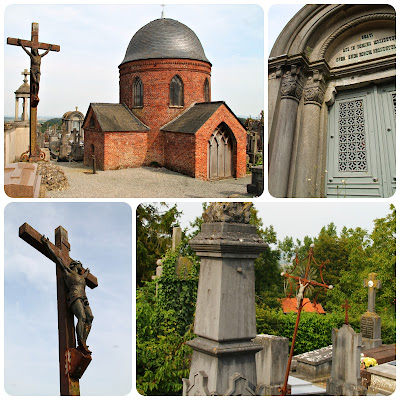 At its bottom an atmospheric old cemetery awaited. The sun had momentarily dipped behind a veil of clouds, turning the delightfully dilapidated jumble of graves quite spooky. Especially since I was all alone there, with Jos resting his weary feet on a bench at the roadside. 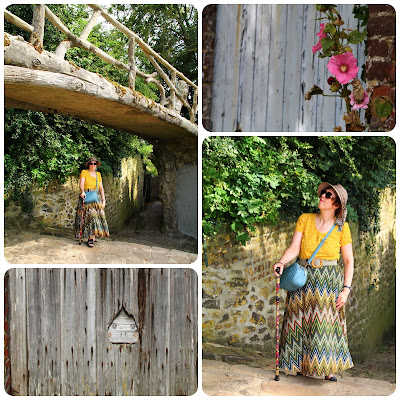 The final part of the walk took us along the Chemin des Remparts, a footpath running parallel with the Grand' Place, offering yet more panoramic views.

Having walked roughly half of the path's length, we decided to cut our walk short by taking a street passing under another town gate, the Porte d'Aire, leading straight back to the Grand' Place.

We had both grown quite tired by now, which wasn't helped by the temperature, which had easily reached the predicted high twenties. 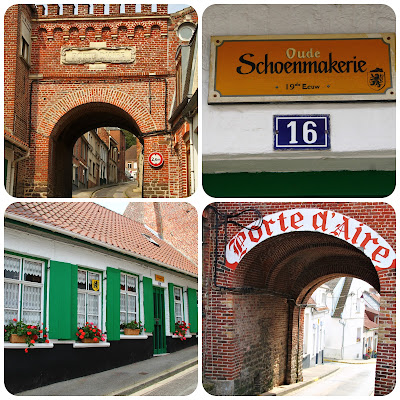 Finding a shady bench, we sat and stared for a while before returning to our car, which obviously had turned into a hot oven by now.

With the airconditioning on full blast, we started the bumpy ride down the winding, pot-holed road leading us to the bottom of Mont Cassel, towards Poperinge and our lovely little cottage. 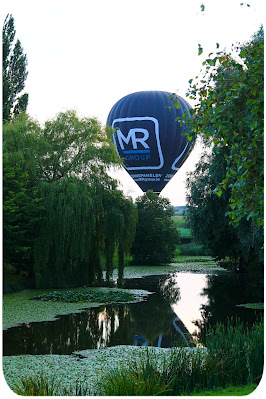 But that didn't mean the excitement was over for the day!

I was just stepping out of the shower that evening, when Jos told me to hurry up and have a look outside. Apparently, a hot air balloon had only just avoided having to make an emergency landing in the field beyond the lake!