Goodness me, time has really been slipping through my fingers lately! Happily churning out the episodes of my travelogue, recreating those short-lived holiday vibes in the process, I almost literally lost track of time so that I now have the mother of all catch-ups on my to-do list. I have to hurry up too, as in just over a week's time we will be going on another adventure!

Let's not waste any further time then, and see what I've been up to since we came back from our little trip. Although, in hindsight, I haven't been up to very much at all in this second month of the Summer that never was.

After our return on Thursday the 5th of August, we had a late lunch, after which I watered the thirstiest of the patio pots and baskets and made a start with unpacking with Bess following me around and demanding cuddles. What with uploading photos and catching up with blogland being next on the agenda, I was glad I'd had the foresight of taking Friday off as well. 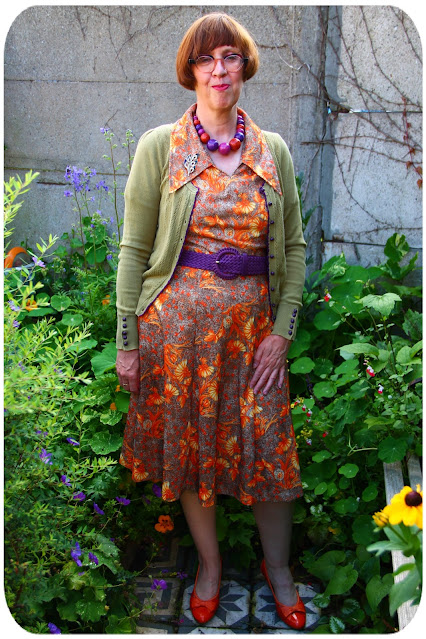 So, this was what I was wearing on Friday. This orange and brown Diolen delight with its lethal dagger collar was found at - you've guessed it - Think Twice several years ago.
It was Monica and the fabulous orange and purple outfit (see here) she recently posted that made me break the habit of accessorizing this dress with blue and use purple instead. I added a purple woven belt, purple, pink and orange wooden beads and an iridescent purple and emerald green peacock feather brooch. All of these were charity shop finds, the brooch picked up on a flying visit to Llangollen in 2019. 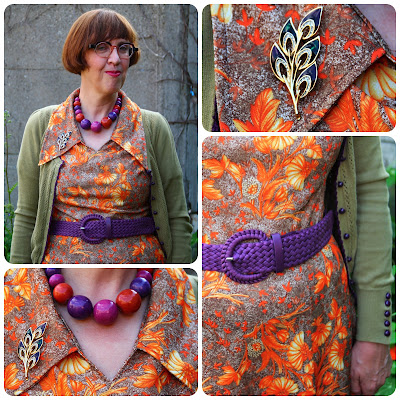 Even the tiny buttons on my chartreuse cardigan were a matching purple! The cardigan, being an XS, is slightly too tight in the bust area, hence its initial relegation to the giveaway and donation pile, from where I dug it out again. A regret-me-not, as Sheila would say. 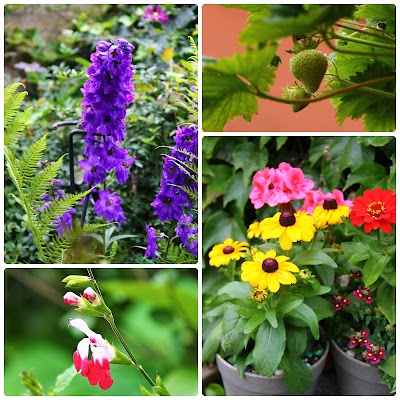 I was matching the purple of the Delphiniums too! In their second flush, they were looking lush and magnificent, although overnight showers had made the tallest of the flower spikes top heavy with water so that it was in danger of toppling over. A rummage through the potting shed was rewarded with the discovery of two sturdy cast iron spikes, originally intended as garden candle holders. They turned out to be just perfect for the job!
The strawberries in their hanging bucket, which I'd given a good feed in the week before we left, was rewarding my efforts with a second flush of slowly ripening fruits. 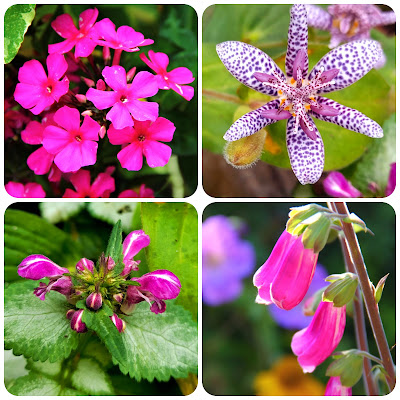 Phlox and Foxgloves are still vying for attention wearing their brightest pink frocks. There were a couple of surprises too: the first of the Toad Lily (Tricyrtis hirta, top right) flowers had opened - and would be followed by many more - and tiny magenta flowers had appeared among the silvery carpet of foliage supplied by Lamium maculatum 'Beacon Silver' (bottom left).
We'd slept late-ish that day, with Bess keeping us company for almost the entire night.
Initially sunny, it soon clouded over, with scattered showers later in the day and highs of 22°C.
After our usual fruit & yogurt breakfast, Jos went food shopping, while I lavished some well needed TLC on the garden, deadheading and cutting back the Malva which has been growing too big for its allotted space. 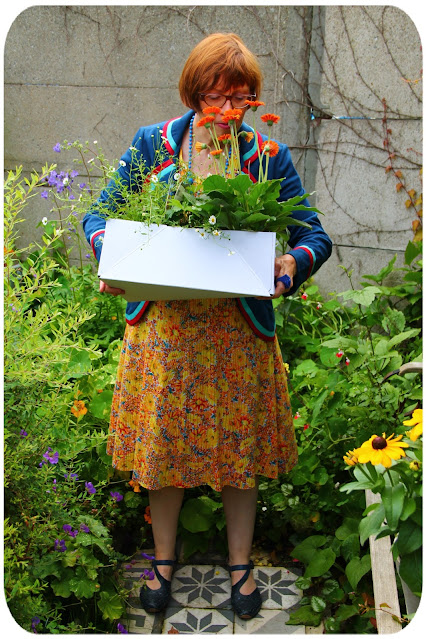 Saturday saw a repeat of Friday’s weather and, in spite of its 22°C, it felt more like an Autumn day than a Summer one.
After a morning of aimless pottering, we decided on a visit to the garden centre, where it was even quieter than the last time we were there and sadly quite empty of interesting seasonal plants.
Still, a couple of plants managed to make their way into our trolley, including an orange Garvinea to brighten up the plant tables outside our back door. We had a pink one last year which lasted well into Autumn last year, so expectations were high. 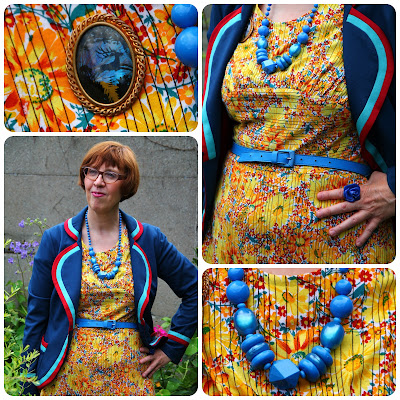 As for my outfit, I still needed to squeeze in at least one wearing of this vintage flower infused yellow dress, so that's the one I went for. It was a charity shop find in December 2017.
Matching the mood I was in, I went for blues all the way, using the colour for all my accessories, including the delicate butterfly wing brooch (this post explains it all!) found on one of our last pre-Covid indoor flea markets in January 2020.
The jacket, from the Spanish Kling label, was charity shopped around the same time. 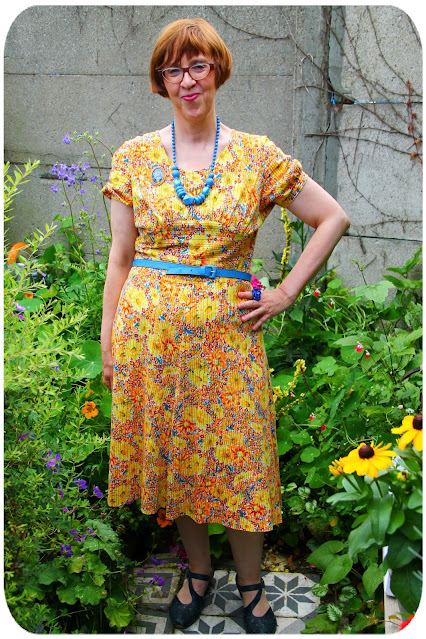 We also bought two Erigeron or Mexican flea bane plants, which I planted in the half basket under the awning outside our back door, to replace the very leggy Petunia and its companion I don’t remember the name of, as both were looking well past their best.
Finally, Aster ‘Alice Haslam’ and Anemone sylvestris came home with us. I planted them together in a pot at the back of the garden, where they will hopefully provide us with some Autumn and early Spring cheer respectively. 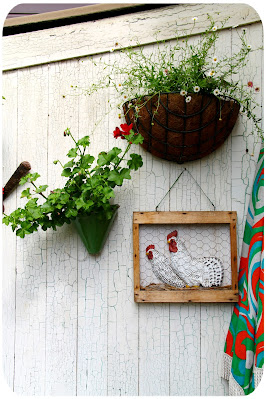 Meanwhile, the Nasturtiums are still going strong, popping up in the most unexpected of places and doing their best to take over the garden.

And look at that splash of fiery orange supplied by Crocosmia 'Carmine Brilliant' (top left)! I'd almost given up on seeing burst into flower this year. 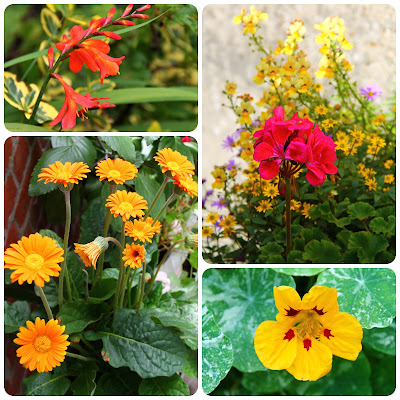 Sunday was yet another cloudy day, with the temperature dropping to just 20°C.

Keeping myself busy in a bid to keep the back-to-work blues at bay, I swept the front room, hallway, staircase and dining room, after which I called it a day on the cleaning front, as it's not exactly my favourite activity.

Instead, I finally finished my book, Julia Glass's debut novel Three Junes. Started several weeks ago, I hadn't been making much progress until we went on our break. Not that I didn't enjoy the book, far from it, but there just didn't seem to be enough hours in the day for reading apart from at bed time, when I kept falling asleep after only a couple of pages. 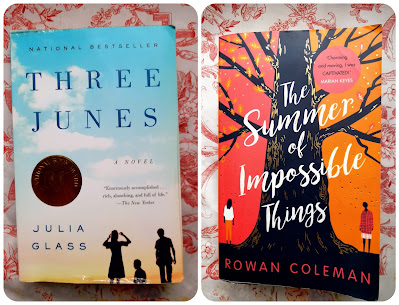 Then I started my current read, The Summer of Impossible Things by Rowan Coleman which seems to be faring a bit better as it's quite unputdownable.

My outfit of the day consisted of one of my rare black floral Summer dresses, its blue, pink and russet flower print joined by a blue butterfly brooch. I added a magenta beaded necklace and wood and purple mother of pearl bracelet, both of which were charity shopped. 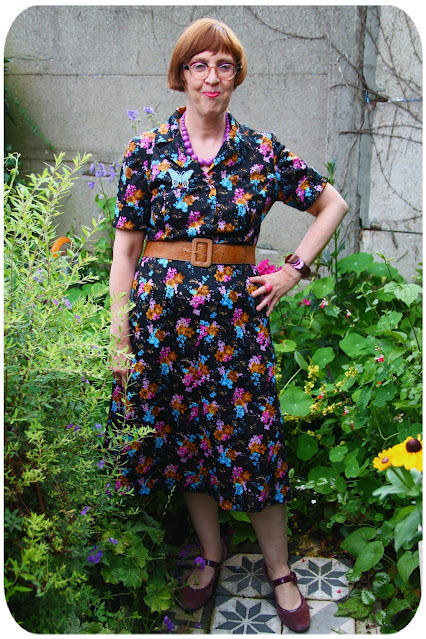 The tan faux leather belt with its rectangular faux leather buckle was charity shopped as well, while I stumbled across the plum coloured suede Hotter shoes on a flea market back in May 2018, where I bought them for the silly price of € 2. 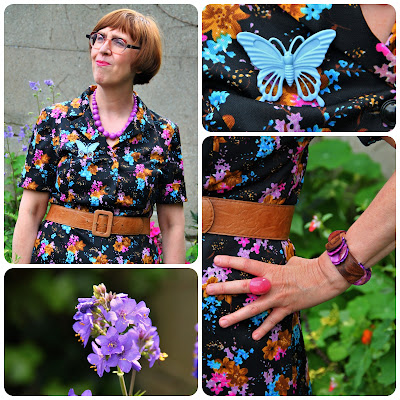 In preparation for the working week ahead, Sunday afternoon called for a little nap, followed by reading in bed. I was joined by Bess, who made sure I had to stay where I was by putting her paws on my leg. As I had my phone with me, I caught the moment on camera, then sent out an S.O.S. to Jos, who was downstairs.
She's the Queen of Cuddling, and in fact we've had more cuddles with her in the six months she's been with us than we had in our twelve years with Phoebe. 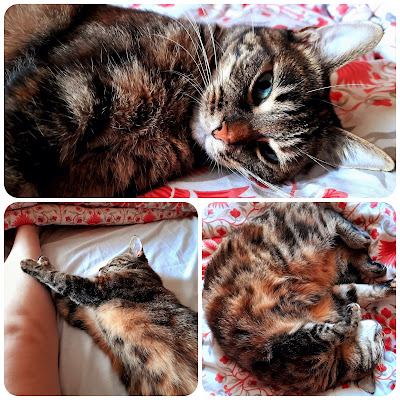 My first week back at the office passed in a blur. After a busy Monday trying to catch up with work, we arrived home only to discover a dent in the back our car. Apparently some nitwit had bumped into it while it was parked out front and of course whoever it was had driven off without leaving a note. Needless to say, we were both shell-shocked. The car's only just over a year old, for goodness sake! As luck would have it, though, we'd just extended our full-coverage insurance, so that repairs would be virtually painless. Chaos continued to reign at work, and it actually took two days without a lunch break to fully catch up and deal with the printer failure which had popped up in the meantime.

I wasn't in the mood for outfit photos on those days, and I can't for the life of me remember what I was wearing. However, this is what I wore on Wednesday.

First wearing of the Nathalie Vleeschouwer skirt I was lucky enough to find in a charity shop in March. The outfit was one I'd assembled weeks ago, but hadn't got around to wearing yet. The short-sleeved salmon pink openwork jumper with its bow collar is vintage, and matches the waterlilies in the skirt's pattern almost exactly. 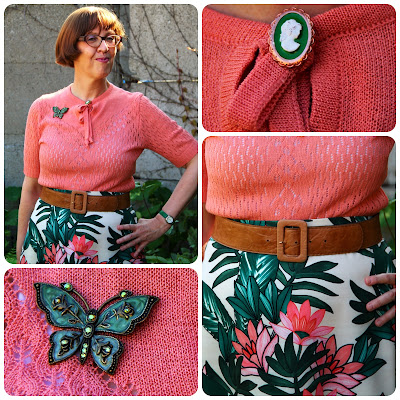 I'm wearing the same belt as I did in the previous outfit, while the butterfly brooch of the day was a green enamelled one. The jumper's bow was kept in check with a second brooch, a tiny green Cameo.
If in the photo on the top left I'm looking like the cat that got the cream, it's because I had finally been able to go out during lunch that day. What's more, the sales at Think Twice - which of course is where I was headed - were in full flow, and down to € 4. 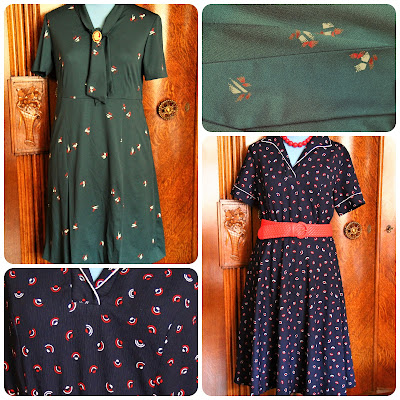 Both the bottle green - and very hard to photograph - dress and the navy based one are label-less, so I expect they were both someone's handiwork. The green one is a bit shorter than my usual length and with its darker colour I'm thinking of wearing it with a burnt orange long-sleeved top and ditto opaques come Autumn. 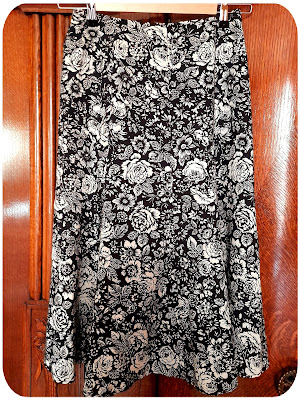 This black and white midi skirt is Finnish vintage and with its wool and polyester blend will be perfect for Autumn too.

Finally, there's this gorgeous sleeveless midi Summer dress with pleated skirt and bow collar. Its exotic flower pattern in yellow, lilac and white on a blue background made me fall in love with it on the spot. 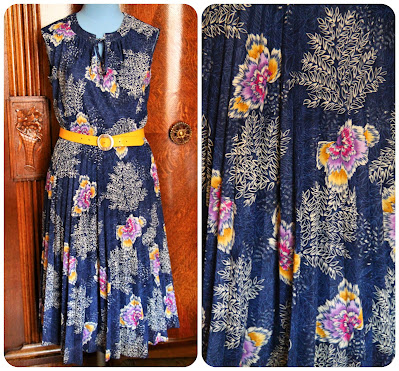 Little did I know that this would be just the tip of the iceberg of vintage and charity shop finds, as I'm definitely finding myself on a roll in that department. But that, my dears, will be for next time!

Posted by Polyester Princess at 16:15