On such a Winter's day

"There’s a certain slant of light,
On winter afternoons,
That oppresses, like the weight
Of cathedral tunes."
~ Emily Dickinson, #82 (1924)

Nearly a century has passed since Ms. Dickinson wrote these words, but they hit home nonetheless.

Winter afternoons, especially those of the granite grey variety, have the tendency to oppress, as if a heavy weight is holding you down, making your limbs feel leaden and a fog descend inside your head. We've been having far too many of such days lately, grey and wet affairs, but not nearly cold enough to be classified as true Winter's days.

And then you wake up one morning with the sun piercing through the layer of clouds, and it's as if a curtain opens up inside you, lifting your mood almost instantly. 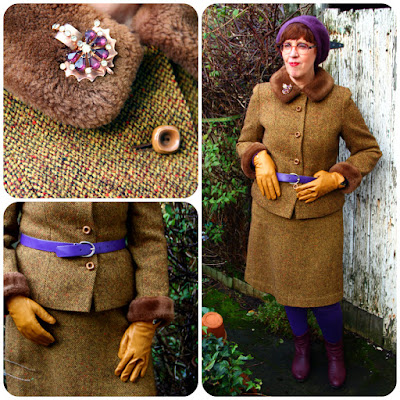 We had the pleasure of making the acquaintance of such a day on the Sunday before last, when plans were afoot for going to our monthly indoor flea market.

Some minor, overnight frost had cooled down the temperature considerably, warranting the wearing of some long neglected Winter woollies.
And why not wear my faithful old tweed suit? It had been quite a while since I wore it as a whole, rather than just the jacket which, as it happens, I last wore on a walk during the Christmas holidays.

When I found it on the rails at Think Twice many years ago, I didn't actually think twice and snapped it up without any hesitation. I fell in love with its classic shape, its mustard colour speckled with red and brown, its caramel buttons and, of course, its furry collar and cuffs. 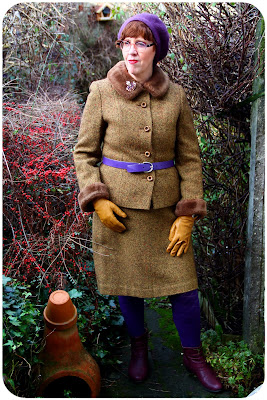 The jacket's belt loops bear evidence of the fact that it was once accompanied by a belt, now long lost in the mists of time. This allows me to use one of my own choosing, and in keeping with the rest of my outfit, I opted for a purple one.

The jacket's collar was the perfect canvas for trying out the fur clip my bosses were kind enough to give me.  Copper and more purple, could it get any better than that? 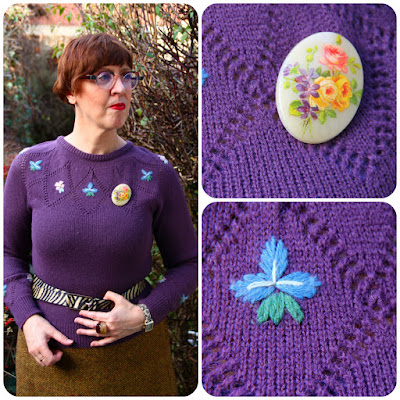 At first, I wasn't sure what to wear with the skirt and I tried several blouses and jumpers, none of which looked right. I was about to give up and wear something else entirely, when I saw this purple vintage jumper winking at me from the top shelf. Initially, I thought it would be too warm, but then I remembered it can be quite chilly in the cavernous flea market venue.

I love the diamond pattern at the yoke, each containing an embroidered flower. Admittedly, I did hide one of these with my floral brooch. 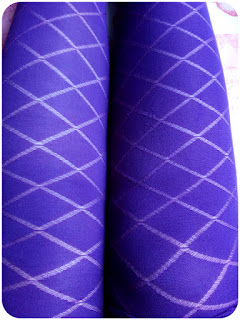 The zebra print belt added a whimsical touch, as did the diamond patterned purple tights, which were a gift from Kezzie. 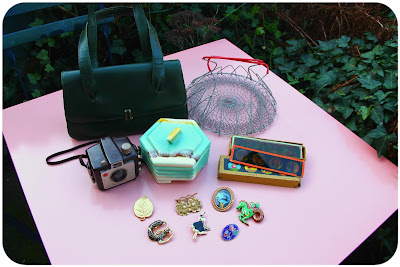 After our initial disappointment as there seemed to be less stalls than usual, we soon got into the swing of things, especially when I found a brooch less than a minute after walking in. It was the green Merhorse on the bottom right and you will be getting a much better view of it later in this post. 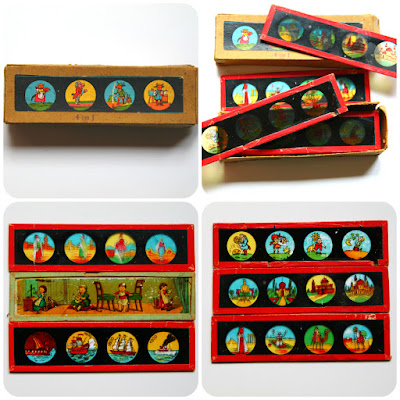 Childhood nostalgia for Jos, who fell for this rectangular carton box full of magic lantern slides.

Our friend Tania's stall always yields one or two treasures, this time in the form of a vintage collapsible wirework egg basket. Here it is among the other kitchenalia in Dove Cottage's kitchen, ready to provide the eggs for one of Jos's famous English breakfasts. 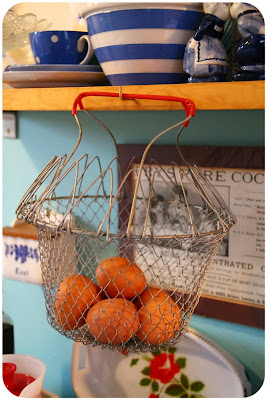 At the end of the very last aisle, we spied this Kodak Brownie camera on a stall presided over by a couple who lives in our village.

It's a Kodak Brownie "Holiday Flash", a popular camera with a moulded brown and tan Bakelite body, which was produced between 1953 and 1962.

It did not come with its flash, but for the sake of this blog, we attached the flash of another Brownie camera from our collection. 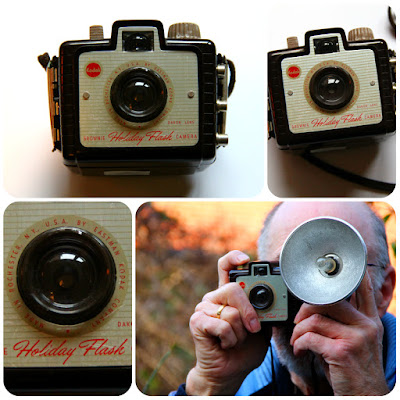 There are quite a few Kodak Brownie cameras among our modest collection. The flash belongs to a 1950s Brownie Starlet camera, which Jos found, complete and still in its box, in the waste disposal unit of the block of flats we used to live in back in the 1990s. 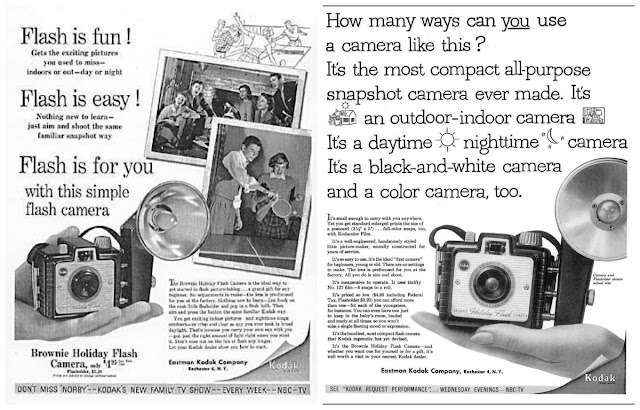 Tania's friend Rita's stall tempted us with this stunning Art Deco style bonbonnière, which has found its rightful place on the 1930s side-table in our sitting room, where it is being kept company by our 1950s Bakelite radio. 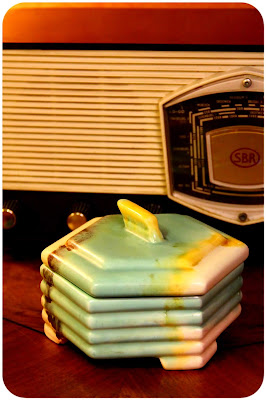 No more handbags, I told myself, but did I listen? You bet I didn't, as how could I possibly not fall for this fabulous bottle green bag?

Well, I was always going to allow myself the exception of out of the ordinary ones like this. It has got a quality seal inside which says that it was made in Belgium. 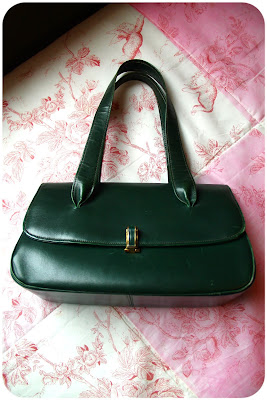 I've already mentioned the Merhorse brooch, but I found more. Here they are all grouped together for you to pick a favourite. 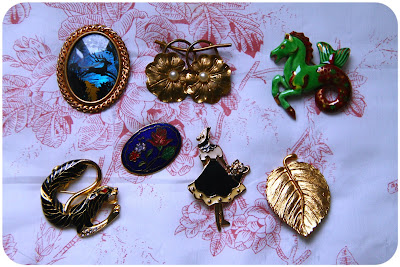 Let's have a closer look.

One of my star finds is the oval brooch on the top left, with its leaping stag. It turns out that the shimmering blue background is made from ... butterfly wings! This kind of jewellery, usually made from the South American Morpho butterfly, was popular from the Art Deco period up to the 1960s.

Apparently, butterfly wing jewellery is still being made today, using butterflies from butterfly farms. If this sounds cruel, then note that these farms are considered as a form of environmental protection of endangered rain forest, allowing more eggs to hatch than when left in the wild. The butterflies then die naturally of old age, which is around 130 days, after which their wings are used to create this amazing jewellery. 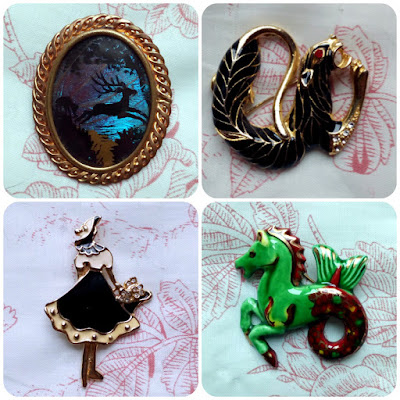 The Merhorse is made from ceramic, and is definitely one of my favourites, not in the least because of his gorgeous green colour. Isn't he fabulous? And definitely vintage, judging from his trombone clasp.

While both the butterfly brooch and the Merhorse were separate finds, all the others were picked up from the same jewellery heaped stall, one of our regular stops, for a silly total of € 12.

There was a fearsome cross between a big cat and some kind of mythical beast (top right) and a fabulously dressed and behatted lady carrying a bouquet of flowers (bottom left). 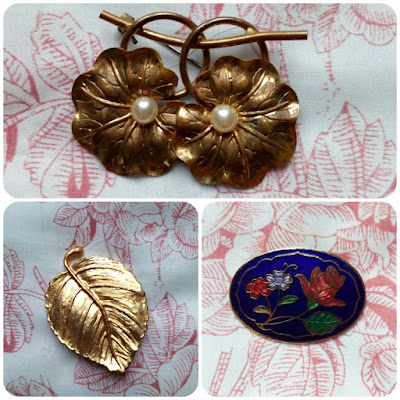 The coppery duo of delicate, slightly tarnished, pearl-hearted flowers is my particular favourite, and might very well be the oldest one of the bunch, while the heavy gold leaf and the blue enamelled floral one are both more recent.

Well, that's all I have time for now.

There will be one more January catch-up from me in February. Until then we will be off on a short break next week, so no need to send out a search party if you don't hear from me for a couple of days!

See you on the other side!