How I love those quiet in-between days bridging the excitements of Christmas and New Year's Eve and offering a welcome pause for body and soul.

This is the only holiday longer than the odd extended weekend when we are not swanning off elsewhere, and having a handful of empty diary pages is pure bliss to me.

Sleeping just that little bit longer, enjoying leisurely breakfasts, spending a couple of hours happily pottering around the house or reading during the daytime: they are all little nuggets of luxury for me. Those little things that make me the happiest. 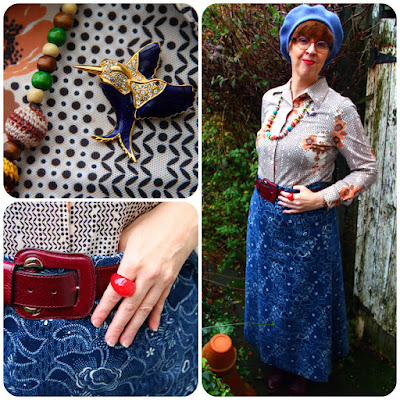 Having the time to go through my wardrobe and endlessly try out outfits is another such luxury I cannot afford myself during my busy working weeks.

Originally, I had this blue velvet skirt earmarked for our Boxing Day walk, but it didn't look right at all with the psychedelic print blouse I'd picked out, so I ended up wearing it with another skirt.

On Friday - the final one of the year - I gave it another shot, digging out this vintage Karelia blouse to accompany it instead. Both the skirt, which is handmade and mercifully lined, and the blouse were Think Twice finds, but with a quite a few years between them, the skirt found only a couple of months back. 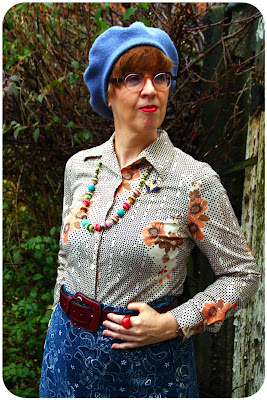 The burgundy leather belt with its massive buckle, and the partially textured necklace (some of the beads seem to be wearing woolly jumpers!) were charity shopped, while the brooch, a blue bird in flight with a sparkly head and wings, was a flea market find.

Speaking of charity shops, these in-between days are just perfect for a spot of shopping too, as at this time of year they are considerably less crowded than usual.

We decided to stay local that day, visiting a small shop in a neighbouring village and then the larger one in our own. 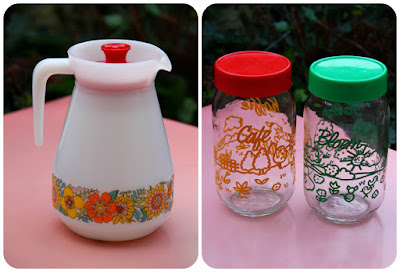 Our rummage in the first shop yielded a white vintage Pyrex jug with a cheerful border of flowers near its bottom and a red plastic lid.

It has already been roped in as a water jug, as we have recently stopped buying bottled water, using tap water to which we add a so-called EM ceramic chip, which is treated with effective microorganisms, to purify it and improve its taste.

We also found two glass vintage canisters. As they are printed with the name Kraft, we suppose they must have originally contained foodstuffs, especially since the plastic lids have ordinary metal screw-on ones inside. The red one is for storing coffee while the the green one is meant to hold flour. Being bilingual Belgium, the contents are displayed in both languages, Flemish and French. 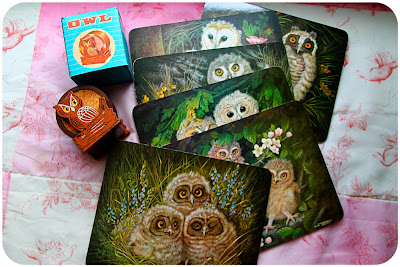 While rummaging in our hometown's shop, we came across a set of coasters in an owl holder, still in its original carton, as well as a set of owl decorated placemats. We bought these as a present for our friends Ingrid and Maurice, who were hosting New Year's Eve this year. As Ingrid loves owls and has a quite a collection of owl related ornaments, we couldn't have picked a better present. 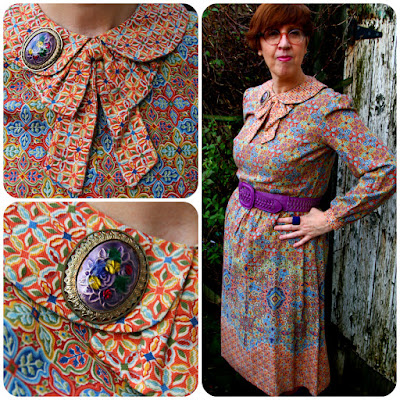 Saturday saw some improvement in the weather, with a couple of welcome sunny spells at last.

The perfect weather, in fact, to combine another charity shopping trip with a stroll in the park. The somewhat chillier temperatures prompted me to wear a vintage Viyella dress I bought from the lovely Diane at Ashmans Antiques & Old Lace in Welshpool last June.

I was completely bowled over by its spectacular print and amazing collar, but now that it was finally getting its first outing, I discovered its drawbacks. First of all, the dress's waist is awkwardly low, sitting just above my hips and making them seem even curvier than they already are. This meant that I couldn't use the self-fabric belt it came with, replacing it with a wide purple woven leather belt instead.

On top of that, the dress is unlined, and the fabric kept bunching up, even if I was wearing a full slip underneath. 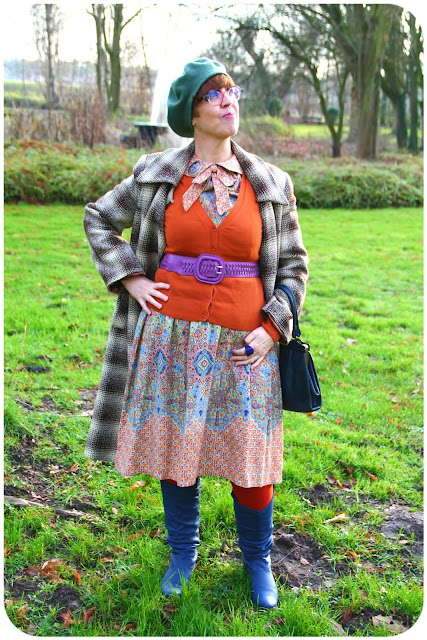 I then had the brainwave to belt my cardigan over the dress, which considerably improved the proportions. The dress is still on the naughty bench until I decide its fate. Quite a few people chuckled when I mentioned this on Instagram, but that's what happens with misbehaving items of clothing!

I'd almost forgotten about these blue boots, which were a charity shop find about two years ago. They're no longer in the best of shapes, but good enough for what we had in mind.

The burnt orange opaques were a gift from Kezzie, who sent them to me last year together with several other pairs she was no longer wearing. 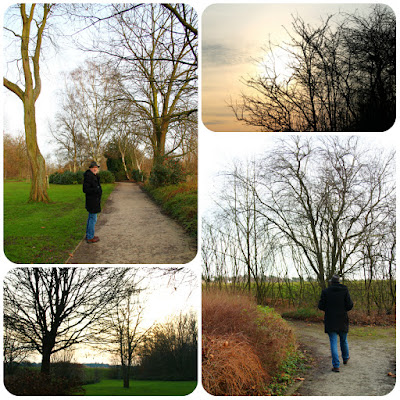 We hadn't been to this park near the big charity shop in Duffel since November, and most of the trees were quite bare by now, with just the odd leaf still foolhardy enough not to give in to its inevitable fate, audacious hangers-on to seasons past.

It was only mid-afternoon, but the light was fading already, painting the horizon with pastel shades against which the trees' silhouettes provided a stark contrast. 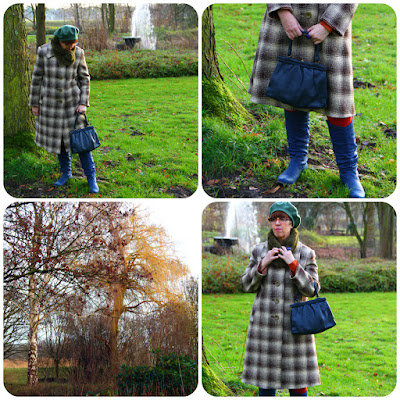 My outerwear consisted of my 1960s swing coat, a lucky find in Oxfam, my sage green beret and my moss green furry supermarket scarf. Oh, and I'd picked out a blue vintage handbag to go with the boots. 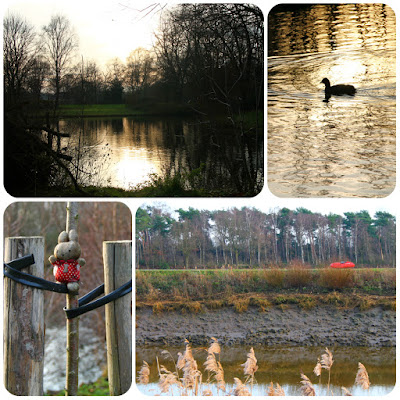 We made our way past the sun-dipped, moorhen filled pond and briefly walked along the river's towpath adjacent to the park.

This poor little toy rabbit was quite dirty faced and must have gone feral having to fend for itself.

Then we noticed this strange red cigar-shaped vehicle racing across the towpath at the opposite side of the river. The wonders of this park never cease to amaze us! 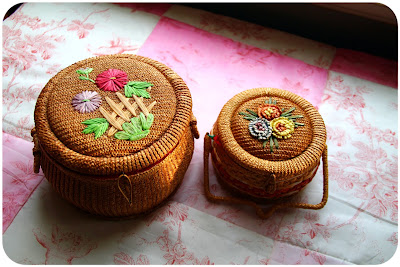 Nor do the wonderful things we keep unearthing in the charity shops, like the small wicker sewing basket on the right. I photographed it next to a regular sized one so that its diminutive size can be fully grasped. I already have several sewing baskets (all but one being used for other purposes), but this one was far too cute to be left behind. 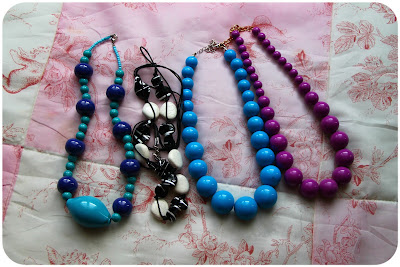 I struck gold in the jewellery department as well, with no less than four necklaces.

There's always space for another cardigan or three, isn't there? The furry one on the left has no label, but has already been worn twice. The middle one is from a Belgian high street brand, while the pink and purple houndstooth one is by McGregor. 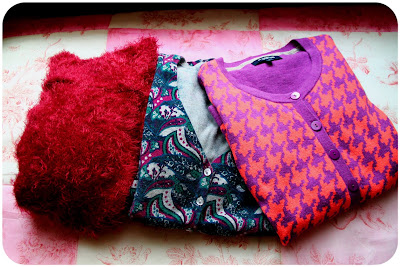 Finally, this delightful jacket caught my eye. It's from the Spanish Kling brand and it looks as if it was hardly worn at all. It's still slightly crumpled but Angelica insisted on wearing it anyway.

Oh, and I found the vintage tartan hat, which is actually a cross between a cap and a hat and has a distinct 1960s feel to it, in the same shop. Aren't they a brilliant match? 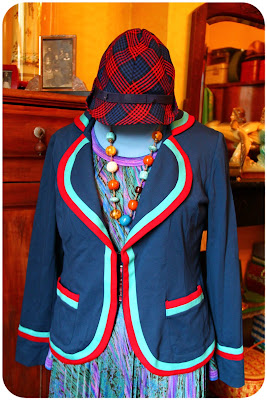 I'm ending this post by showing you what I wore on Sunday.

It promised to be a crisp but sunny day, so we were off for a good long walk, which I will tell you all about in my next post.

I dressed weather appropriately in warm woollies, starting with a rust brown plaid midi skirt and topped by a floral wool-blend H&M cardigan, both charity shopped. 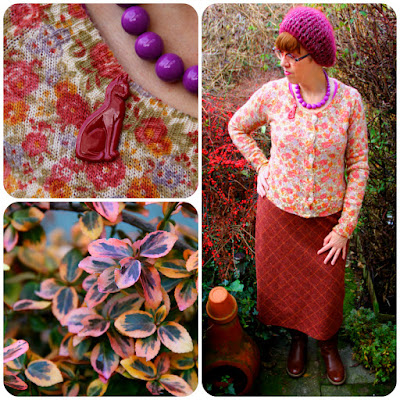 My accessories of choice were a red plastic cat brooch and one of the necklaces I'd scored on Saturday.

My feet were happy in my wool-lined chocolate brown boots and my ears were kept toasty by my woolly beret, another Think Twice treasure.

Now, off we go! Hope you'll join me on my walk next time.