The shackles of time

As from this week, I'm back to working full-time which, after 15 months of reduced hours, only working 2 days a week at first and switching to 3 days in March, is quite a blow to the system!  And while I have to admit that part of me is glad to be going back to some kind of normal, as the on-off working weeks were doing my head in, I am mourning the loss of my temporary freedom from the shackles of time.

Nevertheless, there is one silver lining that keeps me from being too down in the dumps about it all. As I've still got a lot of vacation days left over from last year, my boss and I have agreed that I'll be taking Fridays off and work only 4-day weeks until they've all been consumed. By then, we'll be well into Autumn, but God knows I'll need that time to once again adjust to a more hectic pace of life. 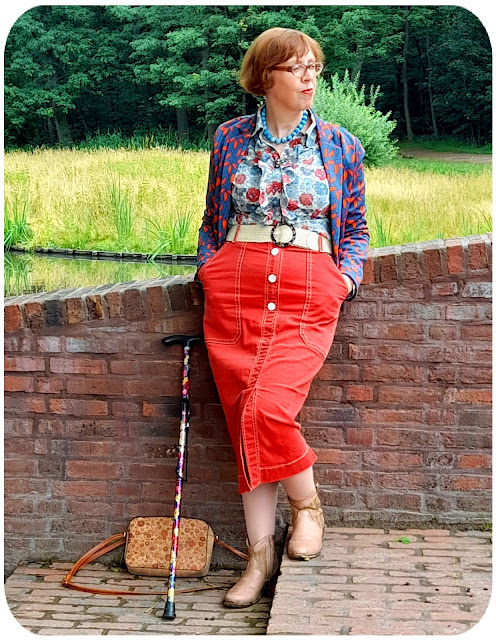 Taking advantage of my penultimate free Thursday on the 24th of June, we decided to combine a charity shopping trip with a walk and a picnic in the park.

At 20° Celsius and mainly dry, it was forecasted to be the best day of the week. The sun was rumoured to make an appearance, but if she did, it must have been only briefly, and I might have blinked my eyes and missed it. Whatever the case, I thought it was the perfect occasion to give my recently charity shopped brick red denim Zara skirt its first outing. 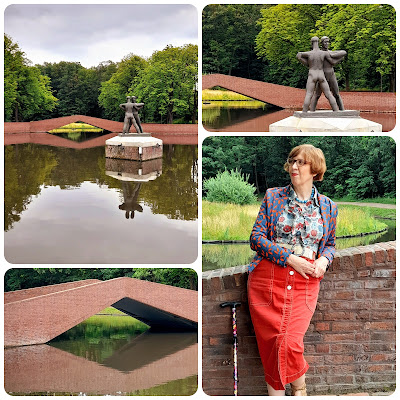 After our visit to an out-of-the way charity shop we hadn't been to for at least 18 months, we braved weekday traffic complete with road diversions and stopped for a breather at the park in Boom.

On one of our last visits, almost exactly a year ago to the day, we wanted to explore the town end of the park with its series of ornamental ponds decorated with bronze sculptures. However, disappointingly, we found our access barred as restoration works were in progress. 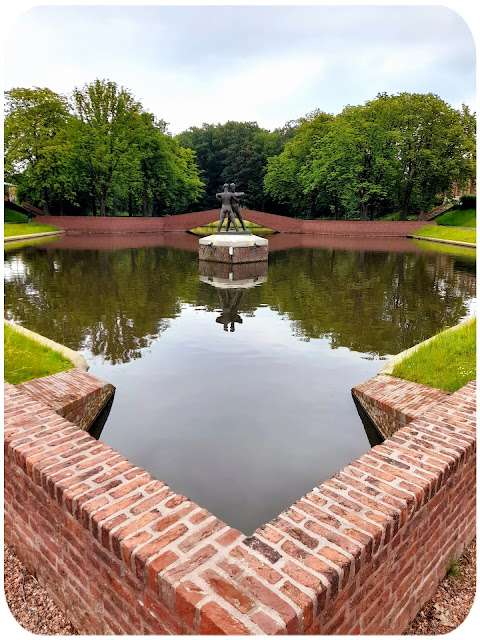 It was therefore with some trepidation that we once again made our way up, finding much to our delight that restoration of the sculpture garden had by now been completed.

The park itself was laid out in 1928, a green lung for the town which at that time was the centre of the area's flourishing brick-making industry. Three years later, the modernist water garden with its bronze sculptures by well-known Flemish artists such as George Minne and Rik Wouters, was added as its crowning glory. 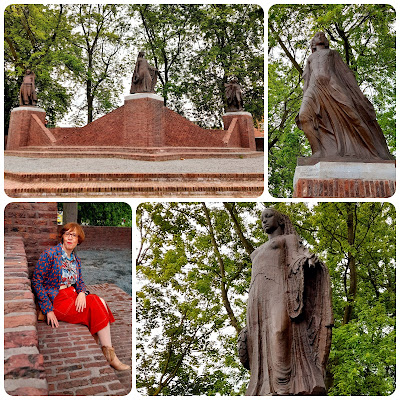 Apart from two young women enjoying their lunch break on one of the incorporated brick benches, the garden was empty, so that we and our camera had it mostly to ourselves.

Unfortunately, I had to make do with the limitation of my phone's camera, as we'd forgotten to bring along our DSLR, but I have to say that I'm rather pleased with the results! 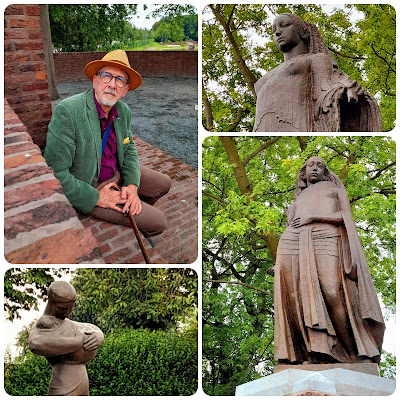 The restored gardens were re-opened to the public in September 2020, but sadly this Spring, the three sculptures on their brick plinth, which are guarding the park's main entrance, were defaced by graffiti.

Horrified, the local residents took matters into their own hands, organizing a group of ten people (the maximum allowed number at the time) to clean off the offending things. 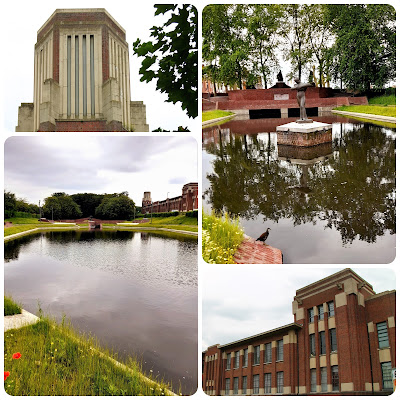 The moody sky was the perfect framework for the water garden's stark and streamlined shapes, which were softened by the wildflowers allowed to run free in the grassy beds, where waterfowl were taking their afternoon naps.

The Art-Deco building glimpsed in the far distance on the bottom left is Jos's old school, which was built between 1926 and 1930 and which, together with the park and the adjacent garden district, was part of the same post-war urban planning project.

The details captured on the top left and bottom right were taken on last year's visit. 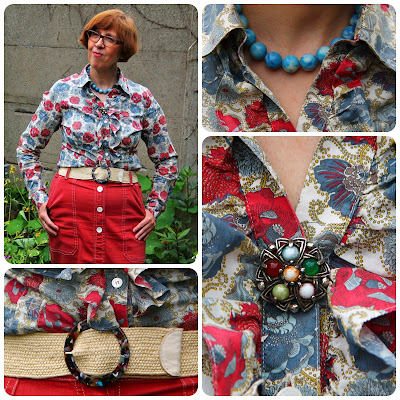 Speaking of details, here's a closer look at my outfit, minus the jacket, which was last worn here.

The ruffled, abstract floral cotton blouse was a charity shop find back in April 2019. It's from Gigue, and was an absolute bargain at € 4 as the original retail price must have been in excess of € 100. The red in its print almost but not quite matches the skirt. As it plunged too deeply for my liking, I pinned it with one of my Miracle brooches.

Further accessories were a mottled blue beaded necklace and one of my stretchy belts, the blue and red in its round multicoloured buckle tying in with the rest of my outfit. 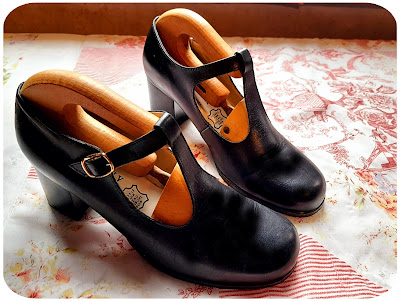 Oh, and before I forget, here are the things I found at the charity shop that morning.

The shop has always been a bit hit or miss, and this time once again pickings were rather meagre. Nevertheless I was quite pleased with these super comfortable leather block-heeled T-bar shoes from the French Westerly label. 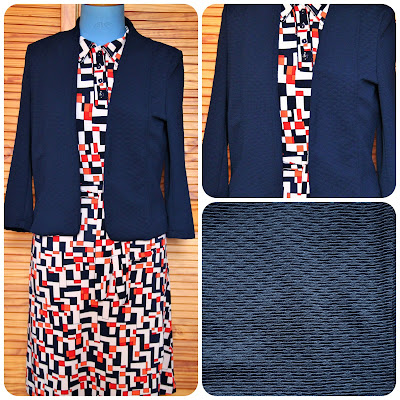 The crepe like fabric of this button-less jacket initially made me suspect it was vintage, but then I spotted the Zoë Loveborn label, a retro brand which used to be sold in a Belgian high street shop. Quite a few of their garments - the vast majority charity shopped - are gracing my wardrobe.

As the quality and condition were superb, and the fit perfect, it goes without saying that I didn't hesitate in taking it to the checkout. I got Angelica to do the honours, and here she is wearing it with my first ever King Louie dress, bought in the sales while on holiday in Ypres in September 2012. One which is  long overdue an outing! 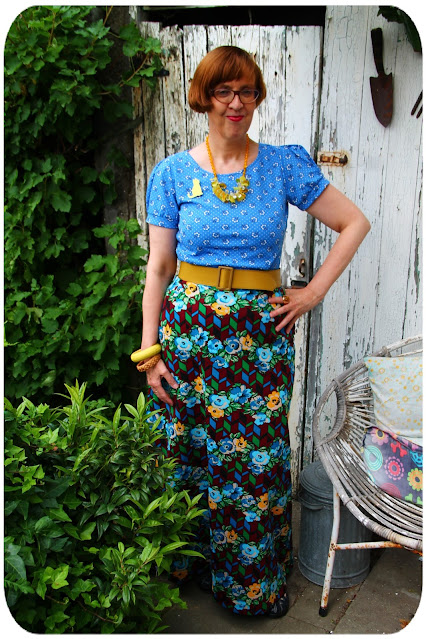 The day's 23°C were strangely at odds with the cloudy sky, which kept us company until late afternoon. That morning, I'd jolted awake in the middle of one of those strangely distorted dreams, which left me with a slight headache and feeling a bit out of sorts.

Scanning my wardrobe's rails my eye was caught by one of my favourite maxi skirts, which nevertheless I was shocked to find I hadn't worn since our last UK holiday in 2019. Here I'm wearing it on a glorious day out with Vix and Jon, and here one week later, for a shopping trip to Shrewsbury. 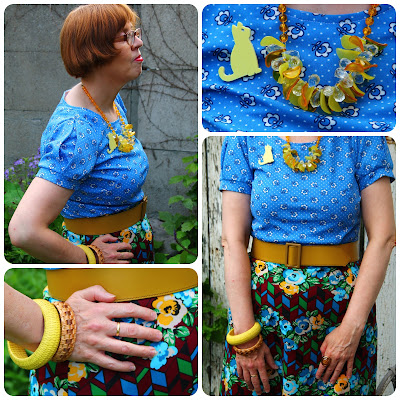 This time, it got the company of a vintage blouse I charity shopped last Summer, but hadn't yet worn. It turned out it matches the blue flowers in my skirt exactly.

To tie in with the yellows of the skirt, I pinned a pale yellow cat brooch to the blouse, and accented my waist with a marigold belt. The belt, wicker bangles and necklace were all charity shop finds. 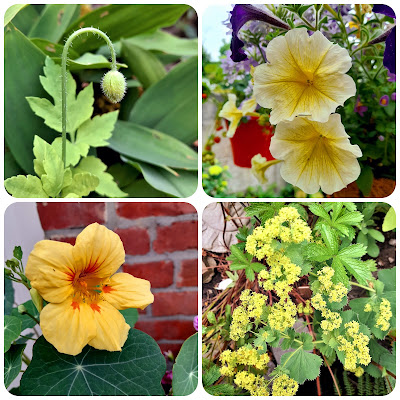 Looking through the kitchen window, my heart made a little leap of joy when I spotted the Welsh poppy (Meconopsis cambrica, top left), which seemed to have furtively popped up overnight. Although at the time of writing its one and only flower has come and gone, and there isn't any sign of additional buds, further inspection revealed at least four other Welsh poppies in various places in the garden. Good news, as they've been conspicuous in their absence for a couple of years! 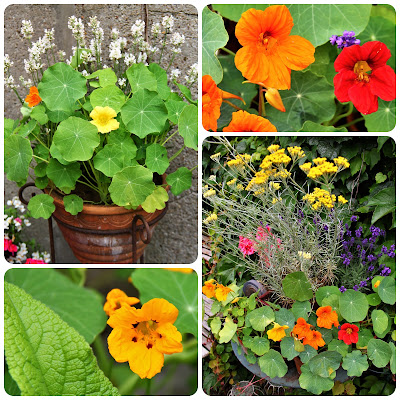 There's no stopping the Nasturtiums once they've started blooming, and it's lovely to see all the different colours, ranging from the palest yellow to a deep, fiery red.

Apart from these, which were grown from seed this Spring, self-seeded ones from last Summer's climbing variety keep popping up with alarming regularity, and as their leaves tend to become as big as saucers they do need to be kept in check to prevent them from smothering their fellow plants. 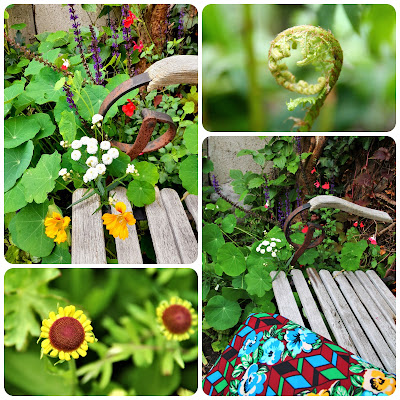 Look at those two Nasties who have made it their mission to grow through the slats of our bench!

I do love this little corner where, apart from the omnipresent Nasturtiums, Salvias nemerosa  'Caradonna' and microphylla 'Hot Lips' and Achillea ptarmica 'The Pearl' are living happily side by side.

I'm loving how lush the garden is but I'm fully aware of the fact that it's a thin line between this and the jungle it usually turns into over the Summer months. 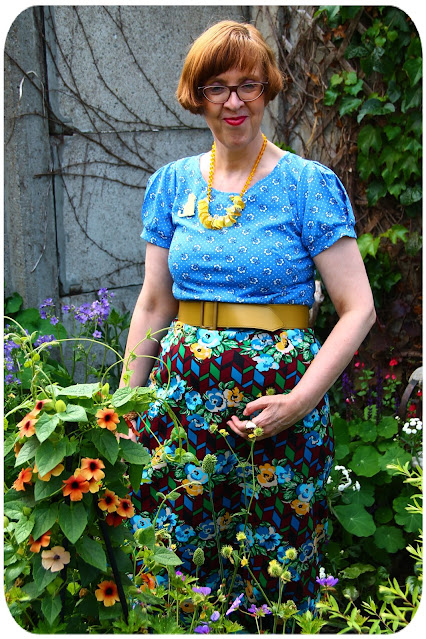 It really is a matter of not letting the heart rule the mind and thus to wield the secateurs on a regular basis. That's if the weather doesn't throw a spanner in the works and turns it into a swamp rather than a jungle.

As I was having a bad case of the jitters and feeling a bit down in the dumps, we started talking about going away for a couple of days once the two-week waiting period after my second jab has passed. As we would be in the middle of high season by then, we decided to take the bull by the horns and grabbed the last available room at our favourite B&B near Bruges in the first week of August. 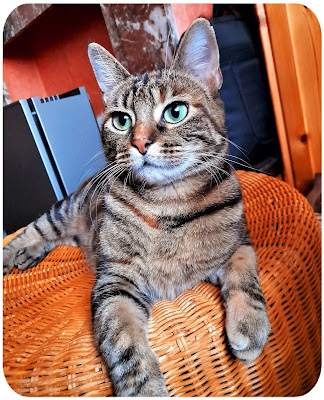 It'll be a wrench to leave this one on her own for the first time, though!

Until next time, do stay safe everyone.