At the time of writing, I've survived my first week back in full-time employment and am about to embark on my second one.  Nevertheless, it hasn't been smooth sailing, as on most days I arrived home with little energy to spare, wondering how I coped before Covid put our lives upside down.

The weather put in its two pennies's worth too, by being moody and distinctly unsummery, but the frequent showers were a blessing in disguise as it meant the garden only required a minimum amount of watering.

I doggedly kept going, as not only could I see my free Friday dangling as a carrot in front of me, there was the extra excitement of my second jab on Friday night. More of that later, but I can already tell you that I didn't suffer any adverse effects to speak of. 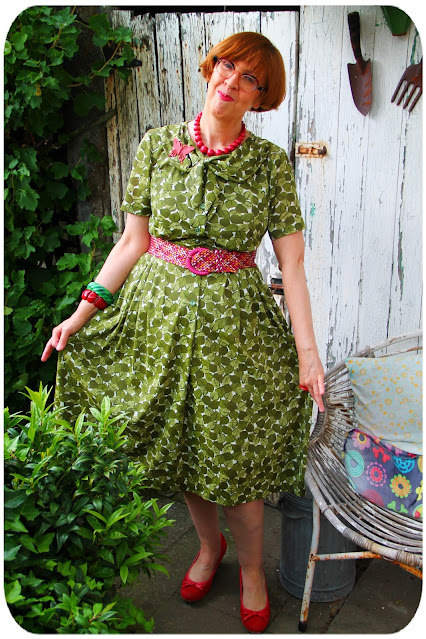 For the sake of my blog, I am taking up where I left off, returning to the 27th of June, which happened to be the month's final Sunday.

The day started with weak sunshine interspersed with cloudy episodes. The thermometer indicated highs of  26°C, which came accompanied by lots of humidity.

Looking through my wardrobe for a lightweight frock, I was drawn to the green leafy pattern of this vintage Casualmaker by Sy Frankl one. With its satiny fabric and unusual tie collar, not to mention - oh joy of joys! - its pockets, it's a favourite which has been gracing my wardrobe for many years. 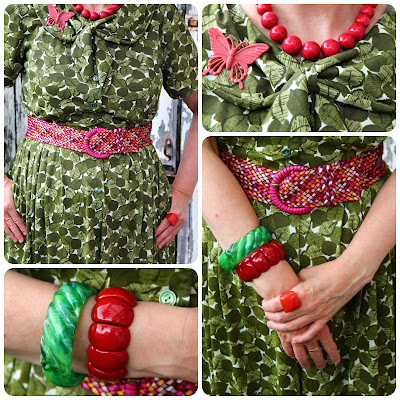 Trawling through my blog, I have to admit to being a creature of habit, as I don't think I've ever worn it with a different colour than pink! I'm even wearing the same belt here as I did when I last wore the dress in September 2020.
Luckily, this is where all similarities end, as instead of a more sugary pink palette, I now opted for cerise for my butterfly brooch and beaded necklace, and even threw in some ruby red for my ring and bracelet. The latter was joined by an emerald green Bakelite bangle. My feet were happy in a pair of charity shopped ruby red suede shoes. Not that I wore these for long, as we didn't leave Dove Cottage's confines all day. 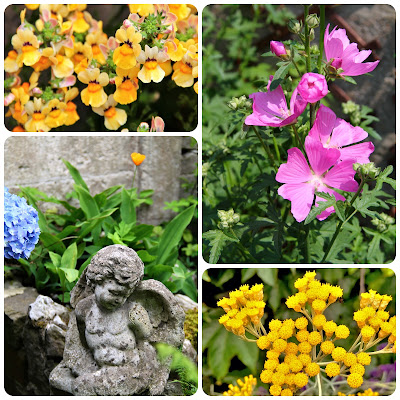 After breakfast, we filled in our tax return, after which I washed my hair and repaired a split seam in one of my dresses.

Inspecting the garden, I was happy to see that the first of the Malva flowers (top right) had opened, with many more to follow. The tiny splash of orange above the garden angel on the bottom left is the precious Welsh poppy. Unfortunately, it didn't survive for long enough to take any close-up photos. 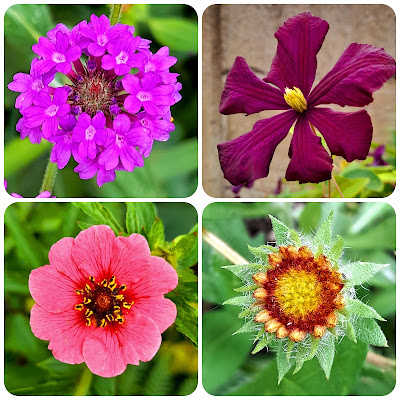 Another sight for sore eyes was the first of the Clematis viticella 'Etoile Violette' flowers (top right). Planted many years ago to grow up an wooden structure which has long since collapsed, it really is a garden superhero, hanging on in the face of adversity. Its deep violet colour never fails to delight me.

Verbena rigida (top left) seems to be thrown off guard by the unexpected exuberance of its neighbours Malva and Red Valerian, as it isn't flowering as abundantly as it did last year.

Another perennial which joined us last year is Potentilla 'Miss Willmott' (bottom left). It is regaling us with a succession of delicious pink flowers, with Gaillardia (bottom right) following closely on its heels as it is getting ready for a repeat of last year's fireworks. 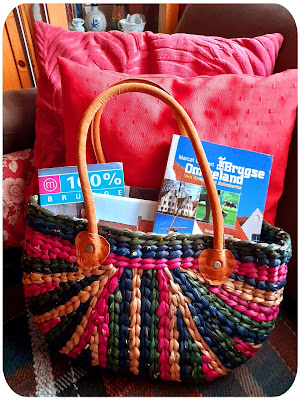 A major relaxation of the rules meant that it was a red letter day for Belgium that Sunday, increasing the number of people we can invite into our homes, relaxing the rules for cafés and restaurants which can now stay open until 1 am, and shopping no longer requiring specific restrictions on numbers. There's a lot more of course, but I've long since given up on keeping track of it all.

Nothing much will change for us for the time being, at least not until the 2-week safety period after my second jab has expired. In the meantime, we started browsing holiday brochures for our little getaway in the first week of August. A pleasurable pastime while we were treated to forecasted heavy rains from late afternoon onwards, 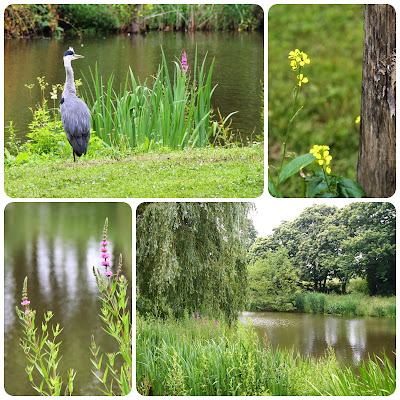 Monday, the start of my final 3-day working week, was a bit of a dismal day, in spite of it being on and off sunny and reaching about 23°C.

Due to the relaxation of rules, as well as the end of the school year, it was very busy in Antwerp. Almost as if Corona no longer exists, which of course it does, especially with the Delta variant on the loose.

Making the most of my final Tuesday off, as well as the weather which was another mixture of sunshine and clouds, we once again opted to combine a rummage in the charity shops with a walk in the park. 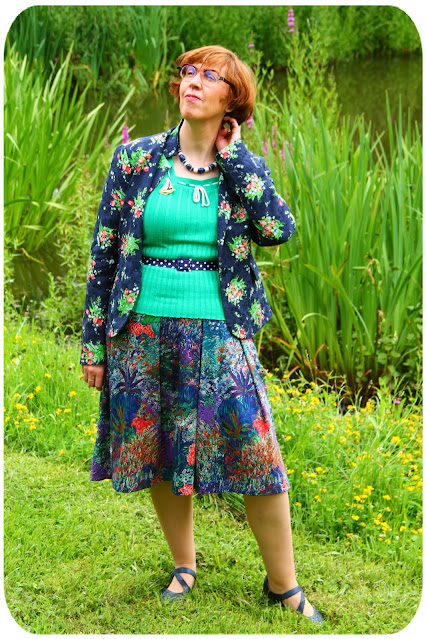 With the temperature still hovering in the low twenties, it was the perfect opportunity to give my recently charity shopped watercolour print skirt its first outing.

Needless to say, it offered a choice of colours for the rest of my outfit, but you know me, if there's green among the options, that's what I'm going for. The sailor style short-sleeved jumper is from Belgian retro label Who's That Girl by way of the charity shops. 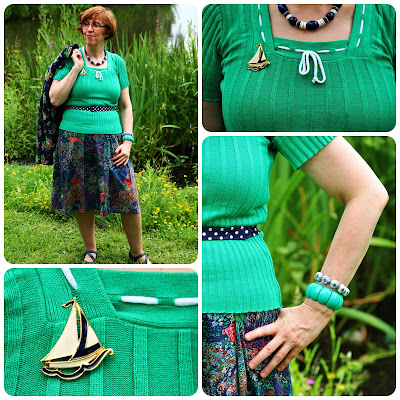 The white and blue enamelled sailing boat brooch was the obvious choice to adorn the jumper, while I continued playing with a navy and white colour palette for the rest of my accessories. The Delft tile style ceramic beaded bracelet was joined by a plastic one in the same shade of green as the jumper.

The navy flapper style shoes are one of my most comfortable pairs for Summer, and it will be a sad day when I finally have to say goodbye to them. Happily, they are still in good nick, so hopefully that day won't be anytime soon. 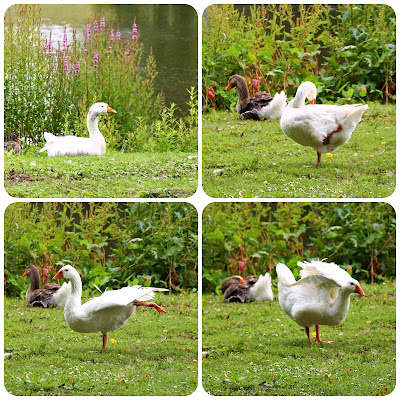 Once upon a time, a pre- or post-charity shop walk in this park was one of our regular Saturday outings, but although we have been back here a handful of times, it never felt quite the same as before.

Still, walking its lushly bordered winding paths, breathing in the scents of Summer foliage and seeing the antics of the waterfowl - this white goose's morning workout had me in stitches - almost felt like old times. 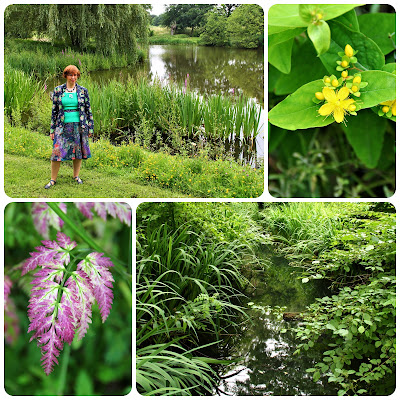 It didn't exactly look like old times, though! Many years ago, I used to admire the imaginatively planted borders surrounding the pond with its rustic stone fountain. The latter is now hidden behind a bank of rampant weeds and water plants (below, top right) and emitting only a trickle of water from its clogged-up spout.

Here and there, a sad and forlorn looking flower is trying to vie for attention, going largely unnoticed, a sudden flash of colour if you happen to look its way.

The obvious neglect predates Covid, but it has all but turned into wilderness now. We've often picnicked here, savouring the park's sensory delights from one of its benches, but sitting here now (top left) would almost certainly result in nettle rash. 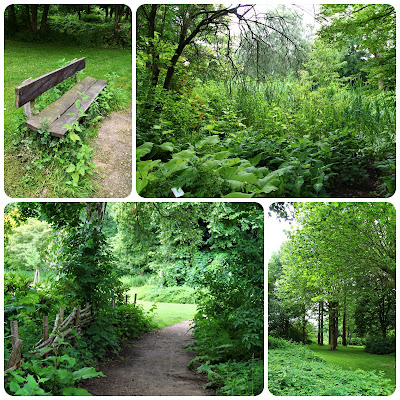 My hair must have been sympathizing with the state of the park, as it was looking quite wild and unkempt too. Not caused by neglect, I hasten to add, but rather the result of a trying on session in the charity shop that morning. I have picked the best of the bunch here!
The weather had warmed up enough by now to go without my jacket. This navy one with its Springlike bouquets of Tulips and Lily-of-the-valley, is originally from Zara but was found in a charity shop in Welshpool during our last UK holiday all of two years ago, in June 2019. 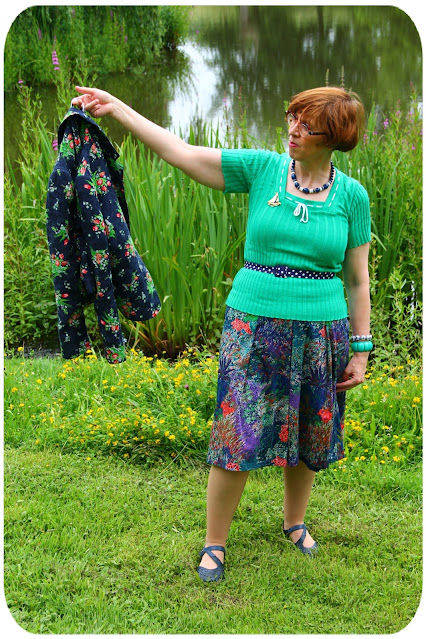 A surprise awaited us when we got home, as apparently Bess has a suitor!
We regularly spotted this neighbourhood tabby in our garden over the years, but he always took a fright and ran off as soon as he spotted us. Now he's paying daily visits, sitting on the kitchen or dining room window ledge in the hope of catching a glimpse of Bess. They seem to be on friendly terms, although Bess often chooses to ignore him altogether. 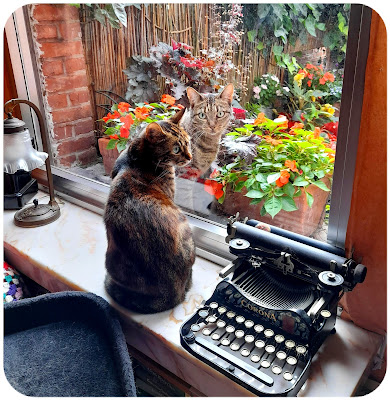 After this post's Bess update, it's time to show you what I found in the charity shop. The shop we visited is in the neighbouring town of Duffel and it's the famous three-floored one.
While Jos was perusing the first floor which has everything including the proverbial kitchen sink, I happily browsed the rails of the clothing and textiles basement. 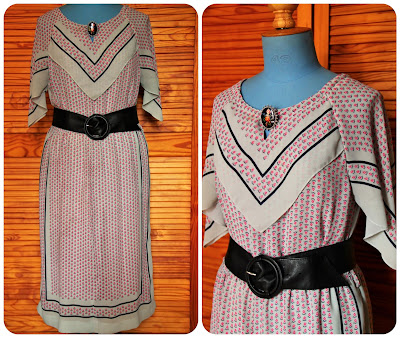 Dove grey and pink might not be the colours I usually go for, but there was no way I could leave this handkerchief collared and ditto sleeved dress behind. It's got one of those care home labels ironed inside and I'm thinking that its former owner, who was called Lucie, was one stylish lady.

The brand label mentions SEIBU with some unidentified signs on its back. When I googled this, it turns out that SEIBU is a Japanese department store, and I found an image of their logo, with has the identical Japanese signs! Of course, my imagination has been making overtime, mulling over how this Japanese dress ended up in the charity shop of a humdrum town in Belgium! 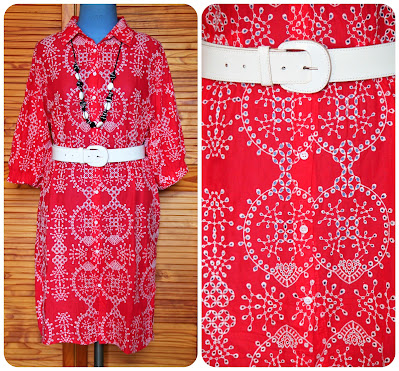 My second find, which was another dress, isn't nearly as exotic, as it's from Zara! I simply couldn't resist the Broderie Anglaise, and I cannot wait to wear it out and about when it's warm enough to do so.

The blue you can see peeking through the eyelets in the close-up photo is Angelica's body shining through! 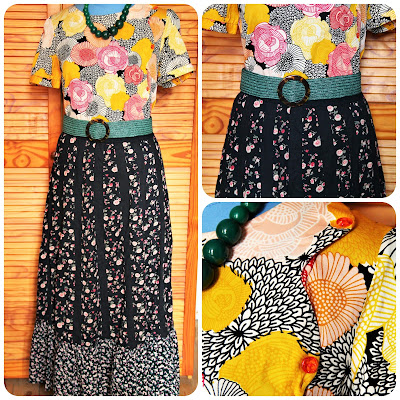 I've already got an ICHI top (this one), and as it's a delight to wear, this one was a no-brainer. It was a perfect fit except for the sleeves, which were a bit tight. I managed to solve this by moving the buttons about a centimeter. The top initially had plain black buttons decorating the wavy side-flap, but unfortunately three of them were missing. This was easily remedied by replacing them with transluscent orange ones from my stash of vintage buttons.

So, this is it for now. I'm going to mentally prepare myself for the new working week, which mercifully will also be a 4-day one. In the meantime, please do stay safe and, if at all possible, sane and sensational too.

Posted by Polyester Princess at 19:09