Hello my lovelies, I hope you are all keeping well?

A cursory glance at the calendar to jot down an appointment almost made me do a double take. Thinking I was seeing ghosts, I blinked and looked again but no, it really is fact rather than fiction that we're about to enter the last week of July!

Better get my proverbial skates on then and continue with the journal my blog has inadvertently turned into, as soon it'll be the first week of August, and we're off gallivanting around Bruges for a couple of days. 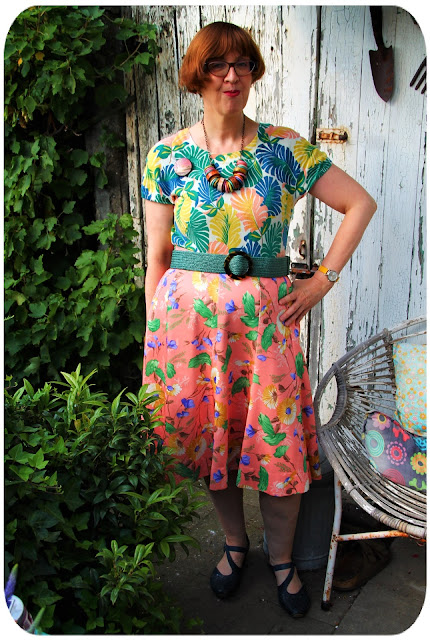 My last post ended on the Thursday of my first week back to the full-time grind, which can only mean that this is what I was wearing on Friday, the 9th of July.

The thin short-sleeved jumper I reached for was perfect, and not just for the day's weather, which brought us on and off sunshine and highs of 21°C. My other incentive for wearing it will be revealed later in this post, so please do bear with me.

The jumper in question, with its tropical leaf pattern, is a charity shopped King Louie one from a couple of years ago. 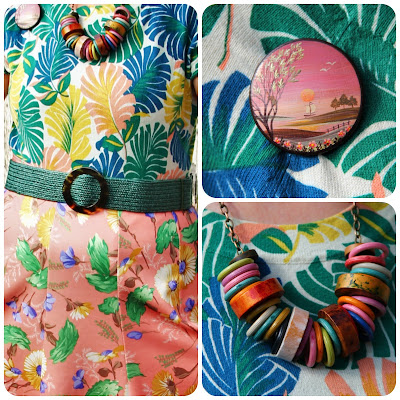 Browsing my skirts, my eyes alighted on this peachy pink one scattered with yellow, blue and green flowers, found at Think Twice many moons ago. I shook my head in disbelief at not having put two and two together before, as surely the jumper and skirt are a match made in heaven!

Accessories consisted of a green stretchy belt with faux tortoiseshell buckle, a wooden brooch painted with a seascape and the funky necklace of wooden discs and rings which seems to pop up quite a lot lately. In spite of this being a day off, I was wearing a watch - a yellow strapped one, as obviously there has to be some degree of matching too - as I needed to keep my eye on the time ... 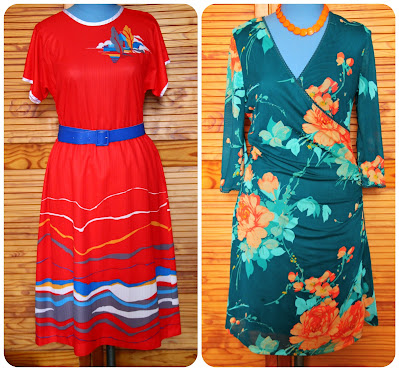 Talking of time, there was plenty of it that day, which we kicked off with a visit to a charity shop.
Our rewards were plentiful, which we took as a good omen for later that day!
Browsing the bulging clothing aisles, there were lots of things that caught my eye, the majority of which were put back instantly due to their size, style or crappy fabric.
These two dresses were no-brainers, though. The red short-sleeved one trimmed with white bias tape at the collar and cuffs, is probably someone's handiwork and, with its abstract seascape decal and wave-like pattern on the skirt, it has a certain vintage feel to it.
The green floral long-sleeved faux-wrap one is ... you've guessed it ... another King Louie and is joining my burgeoning collection. The Kings of Jammy Dresses, they are. Thank you for this very apt term, Sheila! 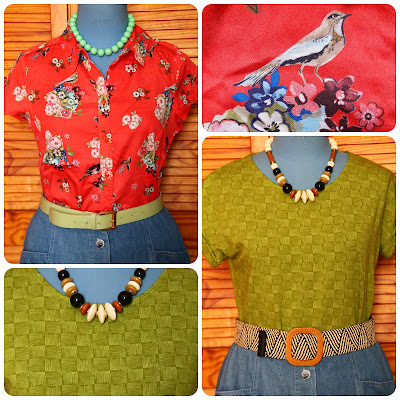 I loved the birds and flowers print on the cap-sleeved orange cotton blouse, so it was swiftly added to my cart, as was the moss green one with its eye-confusing pattern. 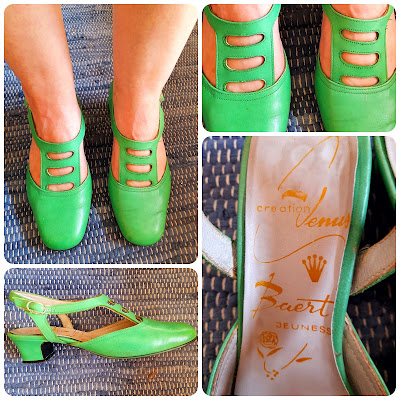 In spite of their slightly scruffy appearance, there was no way I was going to leave this funky pair of green shoes behind. I couldn't find out anything about the brand name, but they do look as if they've come straight from the 1960s. Whatever the case, I have given them some well-needed TLC by treating them to a good dollop of leather restorer cream lovingly rubbed in with a soft cloth. 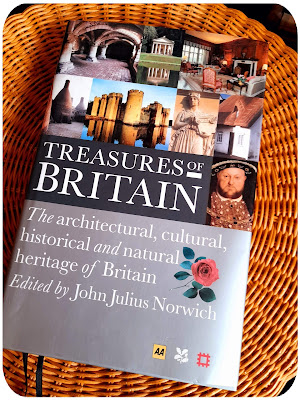 A quick glance at the book shelves unearthed this 704 page whopper on the treasures of Britain. The perfect coffee table book if it didn't give me so much heartache, as visiting any of these treasures in real life is still quite out of the question. 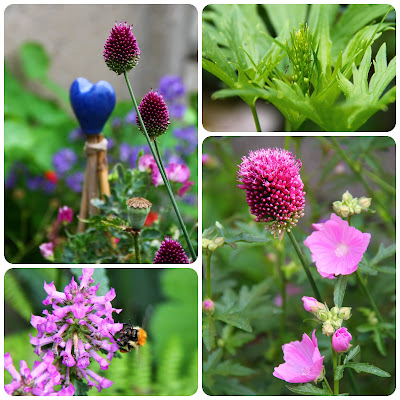 Back at home, we had lunch, after which I retreated to the garden, where much to my delight the cutting back of our Delphinium has resulted in embryonic new flower spikes (above, top right).

No cutting back whatsoever was involved in our Aquilegia alpina (below, top right) surprising us with a second wave of flowers, albeit less prolific and much smaller than before.

I just can't get enough of the colour play of Helenium 'The Bishop' and Geranium 'Rozanne' (below, bottom left), both flowering with wild abandon. 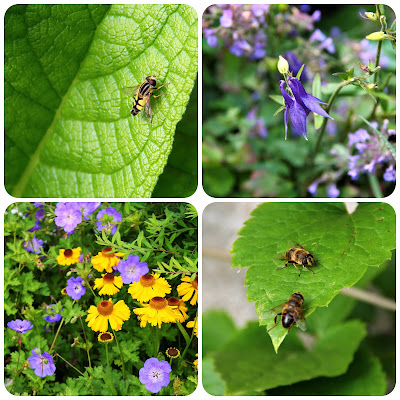 Jos's chore that afternoon was picking the ripe ruby red gooseberries, painstakingly remove their tops and tails and making a batch of delicious jam. With 1,2 kilos of berries (and still plenty left on the canes), he ran out of empty jam pots, and had to resort to filling a glass bowl to the brim. This we covered with a reusable silicone lid and kept in the fridge for ready use. 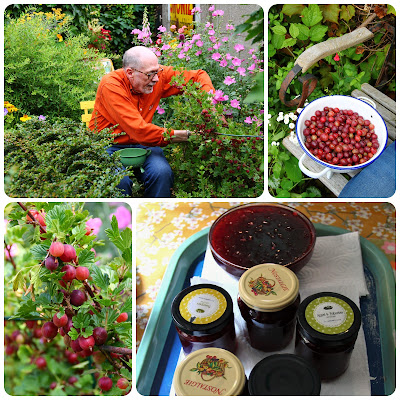 Marked in my diary as a Red Letter Day, it was time for my second jab at around 7 pm, so we made our way to the local vaccination centre after an early dinner. I was in and out in no time, and the jumper I was wearing provided easy access to my upper arm. Here I am waiting out the required 15 minutes after the deed was done.

This, by the way, will be the one and only time you'll see me wearing one of those hateful disposable masks. They are being handed out upon arrival, even if you're already wearing a perfectly good mask. 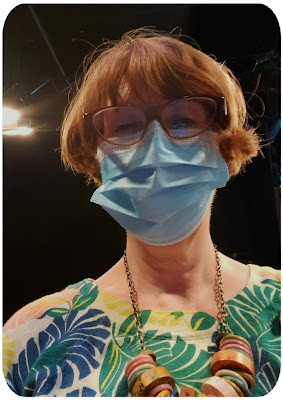 Apart from a slightly sore arm, I didn't seem to be suffering any side effects on Saturday. What's more, I was feeling quite energetic and this in spite of getting up at what amounts to the crack of dawn that morning.

Jos usually feeds Bess in the early morning, when she comes clamouring for food. In her eagerness to get to her food bowl, she misjudged when she jumped on the kitchen table where Jos was in the processing of filling it. She ended up on top of the basket of recycling underneath the table, the racket of the empty cans giving her such a fright that she scratched both of Jos's bare feet, one of which started bleeding profusely.

A douse of antiseptic and a plaster was all that required, but it took Bess a while to get to her senses again and come out of the hidey hole she'd retreated to. Going back to sleep after this early morning adventure proved to be impossible. 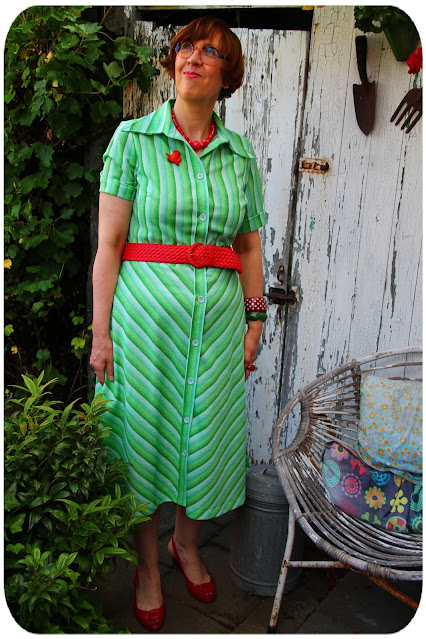 I already wore this vintage green-striped dress for work earlier this week, but as it wasn't photographed at the time, I decided to give it a second outing.
Yet another Think Twice find, I'm loving its midi length - hiding a multitude of sins including pasty legs - as well as the skirt's chevron pattern. 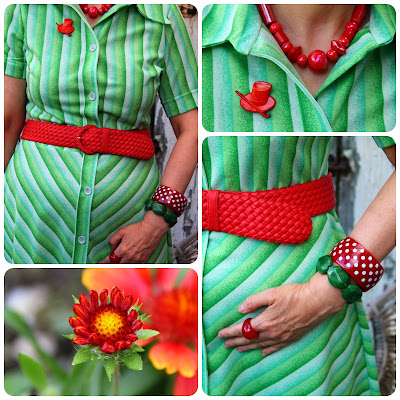 As I usually do, I picked red to accompany it, starting with the red woven belt at my waist.
Further accessories included a red glass beaded necklace, plastic top hat brooch, polka dot bangle and perspex ring, all of which were charity shop or flea market finds at one time or another. As was the green beaded bracelet.
My Clarks shoes were charity shopped in Bridgnorth, Shropshire in June 2019. 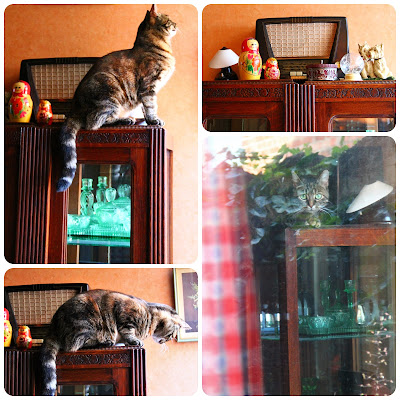 By mid-morning, Bess had clearly recovered from her early morning mishap, as I spied her giving me the stare while sitting on top of the 1930s cabinet when I was in the kitchen. The reflections in the photo on the bottom right are due to it being taken through both the kitchen and dining room windows. 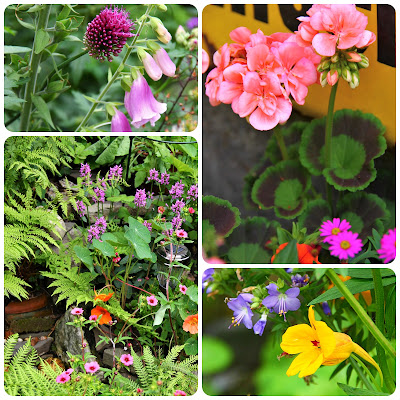 The surge of energy I mentioned earlier spurred me into action in the garden. What with all the rain we'd had some of the plants were looking a bit floppy and bedraggled, so I started the mother of all tidy-up and staking sessions.

I also swept up the debris left behind by the minor flooding of the garden path, and was rejoicing in its tidiness all day, until heavy rains that evening once again undid my efforts. 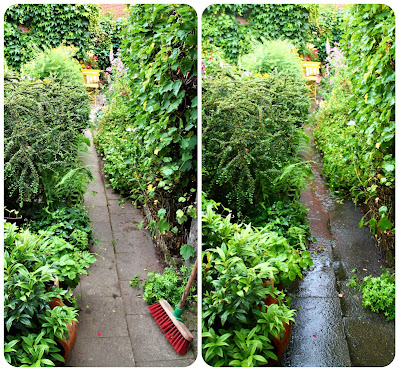 That leaves us with that week's lazy Sunday, when thankfully the sun joined us again, with the temperature a balmy 22°C.
The perfect opportunity to wear my new-to-me red dress!
Saturday's burst of energy had collapsed like a house of cards by the evening, and left me feeling tired and with a head full of cotton wool on Sunday. 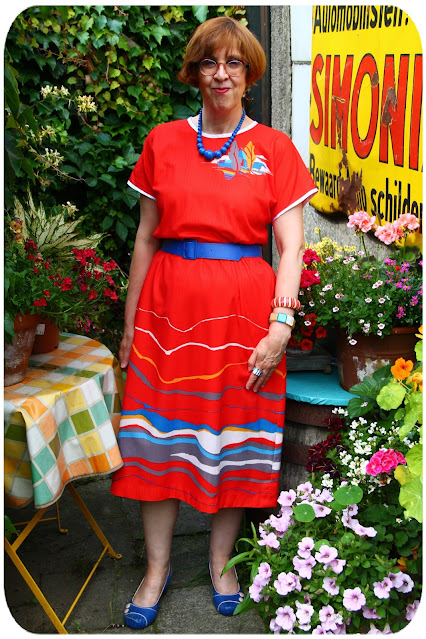 The dress's joyous tomato red and colourful pattern turned out to be real pick-me-ups, making me feel better almost instantly.

When it came to accessorizing it, I took the lead from the cobalt blue bits in its pattern, choosing a belt, necklace and sling-back shoes in that colour. The shoes are € 4 charity shopped but brand new looking Miz Mooz ones which crossed my path in September 2018. 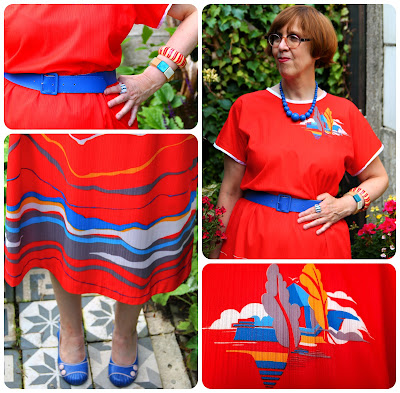 A wooden zebra striped bangle, plastic square beaded bracelet and striped perspex ring completed my outfit. It almost goes without saying that these were all charity shop finds as well. 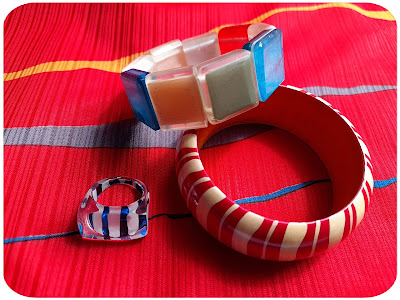 A round up of July's second week will follow in my next post, when I hope you'll be joining me again.

See you soon, and stay safe!