Oh my fur and whiskers

So much to do, so little time! Like Alice's White Rabbit I've got one eye on the clock, but still the hurrier I go, the behinder I get. So - oh my fur and whiskers - I'm late, I'm late, for this very important date ... with blogland.

How I can relate with the poor White Rabbit, being forever strapped for time. And forever, as we all know, sometimes lasts just one second. A blink of the eye, and the day is over and done with, and before I know it another week has passed. I'm not at all sure I like this full-time working lark very much! Covid worries aside, I much preferred last year's slower pace of life. 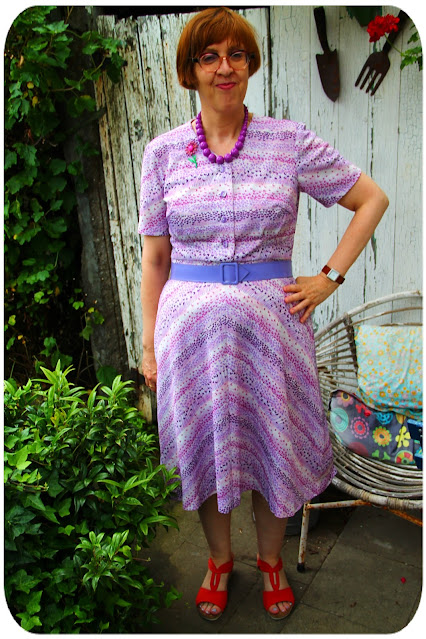 Taking up my journal where I left off, we have now arrived on Monday the 12th of July.
Miserable and grey but quite humid at 23°C, it wasn't a day with much going for it. On top of that, I was feeling quite unwell and extremely tired, which I put down to a side effect of Friday's jab.
As luck would have it, it wasn't very busy at work, so with the purpose of clearing my head, I went for a little walk during lunch break. I may even have indulged in some retail therapy, buying a pair of bright pink palazzos in the Mango sales. Don't worry, you'll get to see me wearing them later in this post. 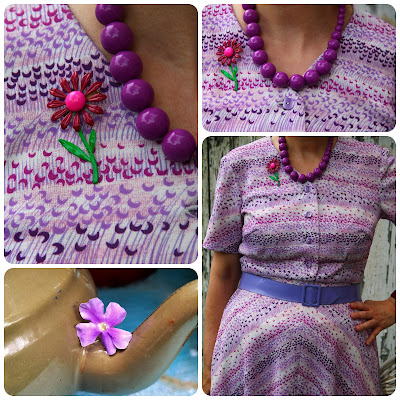 I was feeling marginally better by the time I got home, and even dragged myself outside for outfit photos in which, surprisingly, there is little or no sign of tiredness.
Perhaps this is due to all those brightening lilacs in my outfit?
The dress I was wearing was the one I picked up in the Think Twice sales the other week. Knowing a good thing when I see it, I wore the same belt I used on Angelica when I photographed the dress for a previous post. The shiny vinyl belt with its rectangular buckle was an ancient charity shop find.
Further accessories were a violet beaded necklace and a pink-hearted flower brooch, while contrast was provided by a pair of tomato red sandals. 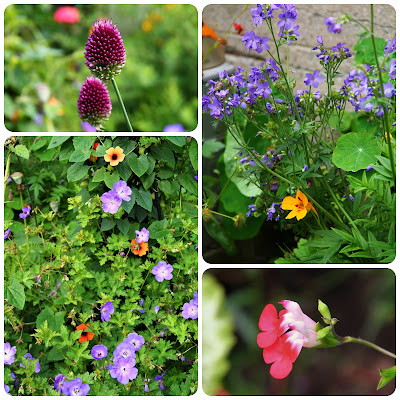 A grey and cloudy day awaited us on Tuesday, when a drop in temperature to 20°C came accompanied with the odd shower and a quite usummery blustery wind.
Although I hadn't slept very well that night, the episode of extreme tiredness episode seemed to have passed, which was quite a relief.
No outfit photos were taken after work, though, as by then I was ready for a lie down. But not before taking a stroll through the garden, noting that all was as well as could be. 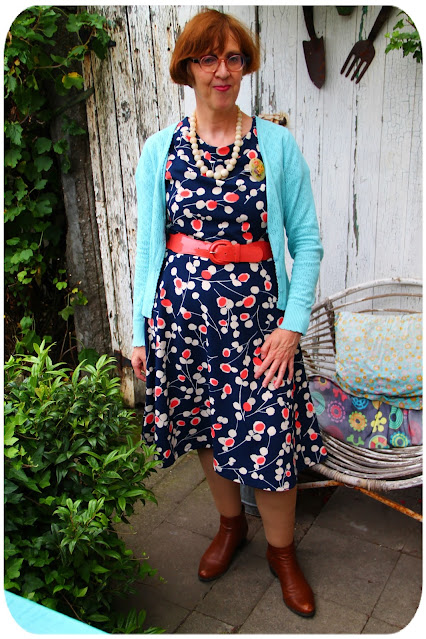 The temperature took another tumble on Wednesday, when all the weather gods had to offer was a measly 17°C.
For fear of sounding like a broken record, it was yet another grey, wet and miserable day. The wind was still causing havoc too, and it felt so chilly inside that I even put on the heating at some point during the evening. 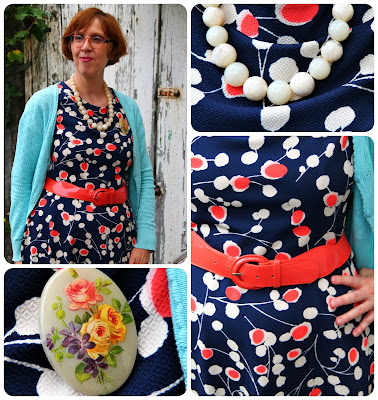 We managed a quick round of outfit photos to show you the charity shopped King Louie dress I was wearing. Although it was quite unintentional, the turquoise cardigan I wore on top was King Louie too.
The orange belt with its elasticated back was an old high street buy, while both the brooch and and the off-white necklace were flea market finds.
The inclement weather made me grab for nylons and ankle boots that morning. In this sorry excuse for a Summer, my sandals remain seriously underused . 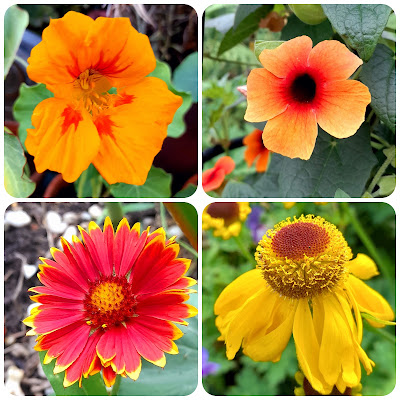 On days like these, I'm especially thankful for the rays of sunshine provided by garden stalwarts such as - clockwise from top left - Nasturtium, Black-eyed Susan, Helenium and Gaillardia!  Aren't they a veritable sight for sun-starved eyes?

It never rains but it pours! And that's exactly what it did non-stop, all day, on Thursday, resulting in the epic and devastating floods in the south of Belgium, in which over 40 people would lose their lives and which would leave thousands homeless. 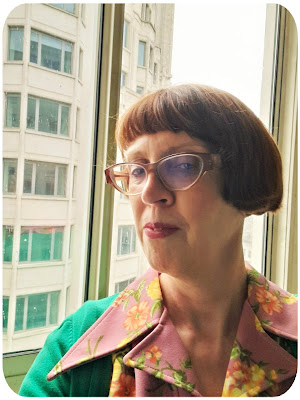 I kept an eye out of the window, as I had to brave the rain for a hairdresser's appointment, but I was in luck, as it had stopped raining for all of the ten minutes it took me to get to the salon!

I had my usual colour and cut and I was happy to hear Michel, my lovely hairdresser, declare that both sides of the French bob I'm aiming for are now almost in sync. I also had my fringe cut quite a bit shorter, which I'm delighted with it. 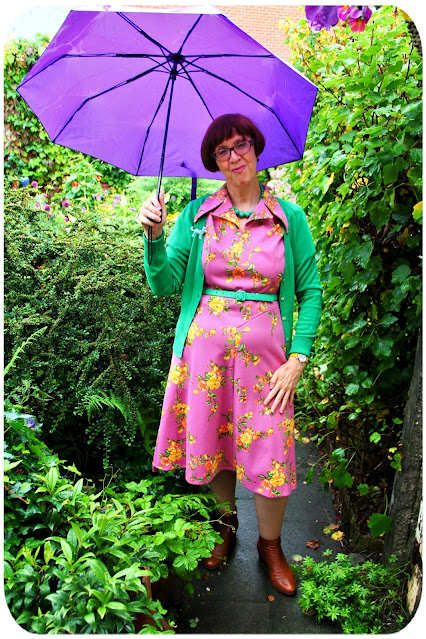 As it was still raining when I got home, we had to resort to taking outfit photos with the aid of my umbrella.

The dress is one of my beloved Diolen Delights from Think Twice and has already made several appearances on the blog. It also had the honour of accompanying me to the UK twice, in 2018 on an outing to Erddig in Wales (here) and in 2019 when we visited Ironbridge (here). 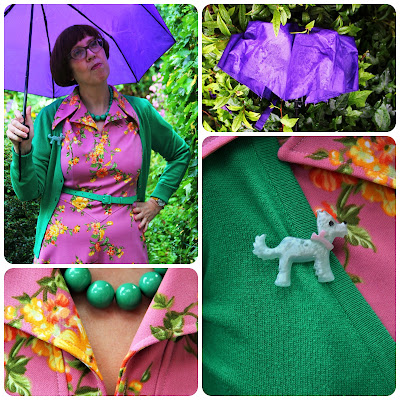 Green seems to be my go-to colour to accessorize it, and this time was no different, as I added a green belt, beaded necklace and cardigan.
The vintage dog brooch, its little pink bow tying in with the dress, was a flea market find. 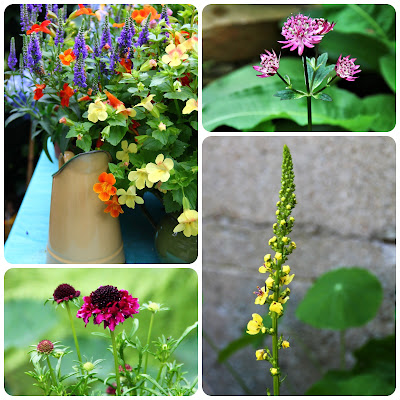 In spite of the at times ominous looking sky, it remained dry all day on Friday, with the temperature climbing a couple of degrees to highs of 21°C.
A stroll through the garden after breakfast was rewarded with quite a few surprises. Much to my joy, the sorry looking Verbascum (above, bottom right) we brought back from the garden centre in May seems to be thriving, pushing several spikes of tiny yellow flowers skywards.
Then there are the first jewel coloured pincushions of Scabiosa 'Barocca', not your run-of-the-mill Scabious but one with a difference. 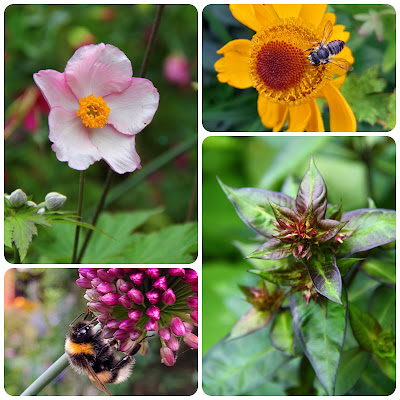 Our Japanese Anemone (top left) is flowering early this year. The changeable, at times almost Autumn-like weather, must have confused it, as last year its first flower buds only appeared in the second half of August!
Much promise is being shown by the Phlox (bottom right) we planted earlier this year. At the time of writing it is blooming its head off, but even with its tiny flower buds crowned by bronze tinged leaves it is a joy to behold. This is Phlox 'Sweet Summer Wine', by the way. 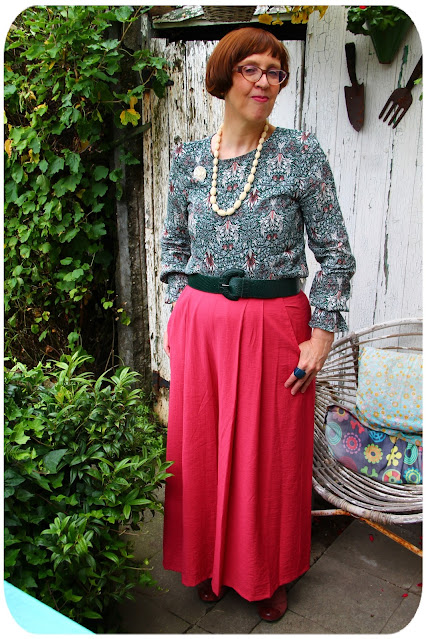 My outfit was built around the bright pink palazzo trousers I bought in the Mango sales on Monday. Well, officially they are culottes, but definitely not on tiny me!
I thought the William Morris for H&M blouse I found at Oxfam at the tail end of last year would be their perfect companion, and indeed I felt fabulous in this outfit, its flapper vibes complimenting my new hairdo! 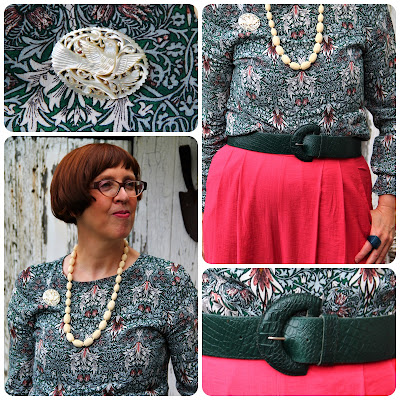 A bottle green mock croc belt, vintage mother-of-pearl brooch and ivory coloured carved beaded necklace completed my outfit.
We were off to the charity shops after breakfast, for which I added my faithful workhorse of a dark denim jacket - charity shopped, obviously - on which I pinned a pale pink felted flower corsage. The scarf was once bought retail, from H&M if I remember correctly.
The blush pink retro style shoes I charity shopped in February couldn't be more perfect to finish my outfit.

Here's a quick look at that day's charity shop bounty.

As a lover of all things green, it was almost a given that this top sprinkled with clusters of orange flowers followed me home, while the ethnic print cotton skirt landed in my basket as well. 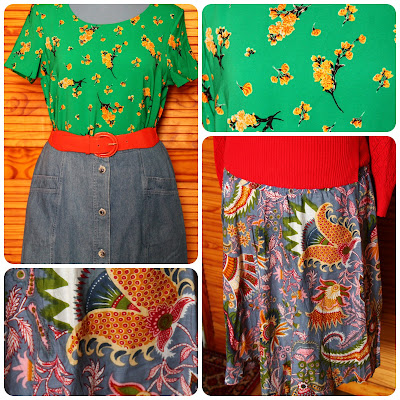 I'm loving the different shades of blue in the floral pattern of the vintage skirt (shown below), which is lined to provide additional swishiness. No pockets, though.
Both skirts have been worn satisfactorily in the meantime and will be featured in a future post.
The vintage blouse is missing a button, but as I don't like the existing ones very much, I might replace them with a complete set of new ones from my stash of vintage buttons collected over the years. 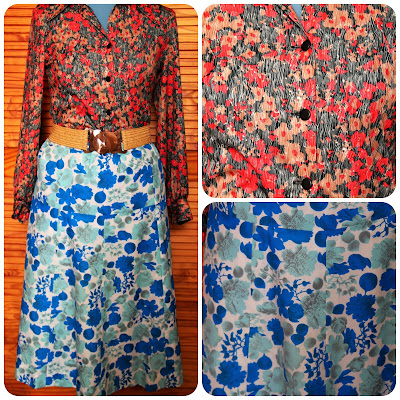 And so this post has once again come to an end ...
But oh my fur and whiskers, how could you forget to mention me?
Oops, I'm sorry Bess, I'm putting this right immediately by adding this lovely photo of you for all your fans in blogland! 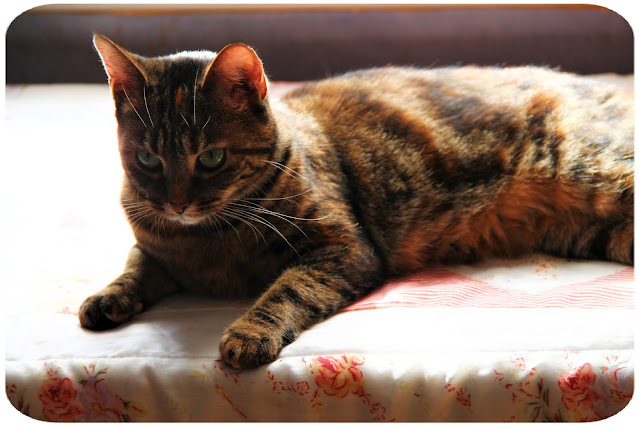 I'll be off work for a week, an unheard of luxury which is making me feel all giddy.

There might still be a post from me before we go away for a couple of days next week, but if not, I'll see you on the other side!

Please do not forget to stay safe, my dears!