The heat is on

Hello there! We've just come down from a heatwave with sizzling hot highs of 33°C. Now I do know that some of you relish these kind of temperatures, but anything from the high twenties onwards is making my brain go liquid and my body languid, and I can feel myself slowly but surely turning into a sloth.

In the days which are the subject of this post, temperatures were only just starting their ascent towards the dreaded 30°C mark, but they were still quite bearable in hindsight. Our bedroom was still relatively cool and we were still sleeping under our Summer weight duvet, albeit with one leg dangling overboard whenever it got too sticky.

Before I plunge headlong into this post, however, I 'd like to thank you all for the well wishes on the receipt of my first jab. My way of posting, switching almost seamlessly between the here and now and the recent past might have caused some discombobulation, though, as some of you seemed to be under the impression that I was talking about my second jab. This, I'm afraid, will only be on the 9th of July! 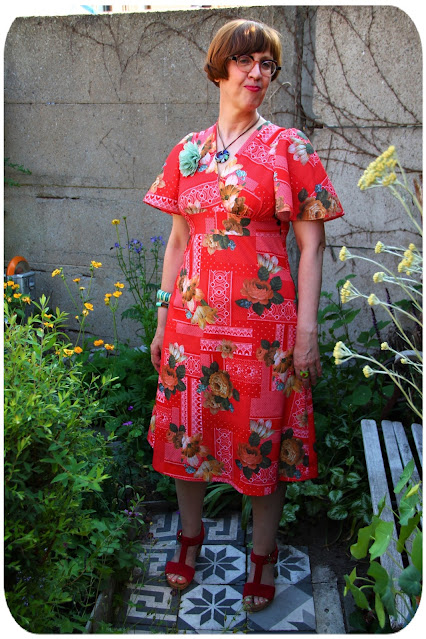 From the future to the past again now, as this is what I wore on Thursday the 10th of June. That day we were treated to temps of about 26°C, accompanied with a welcome light breeze and a smattering of clouds.

Thankfully, the mystery bites, whose itchiness had been exacerbated by sitting under a sweat-inducing hairdresser's cape on Wednesday, had benefited from the cream I'd liberally applied to them overnight. Phew, what a relief.

Those on my legs had all but disappeared by now, so that I could epilate my legs without any discomfort. I even applied mint green polish on my toenails! No closer look, as I must be one of the world's clumsiest nail polishers! Time to get out my sandals, starting with my super comfy red suede Gabor ones, which were a sales bargain a couple of years ago. 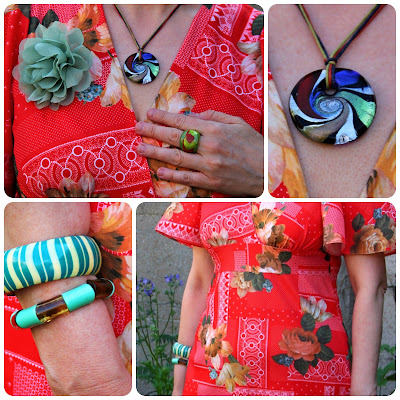 This vintage dress always puts a huge smile on my face. Not just because of its tomato red colour or its delightful floral pattern. Obviously, I'm head over heels with its flattering silhouette and fluttery butterfly sleeves. But the main reason for that huge smile is that the label has my name on it: Lady Ann! How lovely is that?

A sage green flower corsage was added to keep the blowsy roses in its pattern company. The wooden zebra striped bangle was part of a charity shop haul in October 2019, while the plastic green and amber bracelet was an old retail buy.

Both my ring and swirly pendant are made of glass and both are holiday souvenirs, the ring picked up at a market stall in Bruges in 2019, and the pendant at Scolton Manor in Pembrokeshire in 2012. 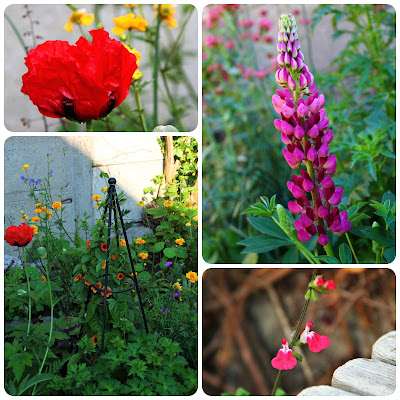 Sauntering into the garden after breakfast, I was delighted to see that all five Oriental poppies had now opened, offering fierce competition to the delicious jewel colours of the two-tone Lupine spike at the opposite side of the garden path.

Next to the bench, the first of the tiny but fiery flowers had appeared in the Salvia microphylla ‘Hot Lips’ we brought back from the garden centre in May. 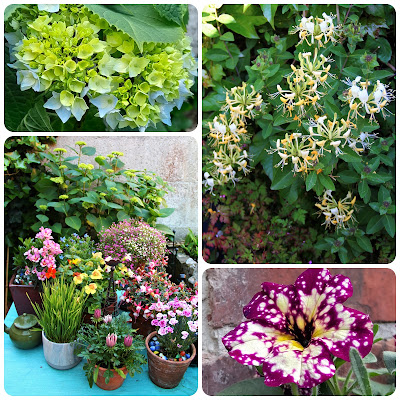 Having pruned our Hydrangea to within an inch of its life, it seemed to take a lot longer than usual for its first flowers to appear, and when they finally did, they remained tiny for the longest time. The warm weather following a period of prolonged rain must have done them the world of good, though, as look at them now! This is one of our oldest additions to Dove Cottage's garden and still going strong after all these years, delighting us with its frothy acid green and delft blue flower heads each Summer.
Another old favourite is our "Honey Baby", a deliciously named dwarf honeysuckle, at the very back of the garden. This is not its best year, though, as it needs a lot of dead wood removed. The abundant foliage to its left belongs to Herb Robert (Geranium robertianum), which arrived in our garden uninvited, courtesy of the bird seed we scatter in Winter. 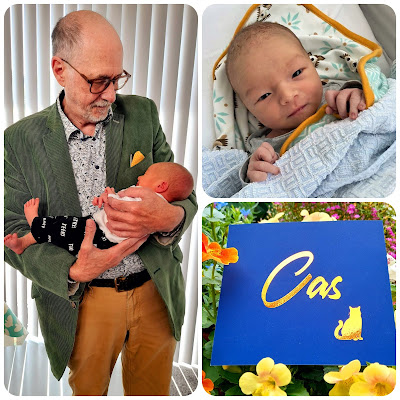 That afternoon, we went to meet grandson Cas for the very first time. His parents only live a matter of minutes from us by car, and in fact I've already taken you to their house a couple of times when we were looking after their cat, Abby. She even features on Cas's birth announcement, although we're not quite sure she's very keen on having to share attention with a tiny human!
Friday, my final office day of the week, was quite a busy one, and with the 26°C we were once again served with, brain melt had already started creeping up on me. Needless to say, I was exhausted by the end of the day. With the heat trapped in our little walled garden, we had to wait until the worst of it had passed before quenching the thirst of our pots and hanging baskets at about 8.30 pm. 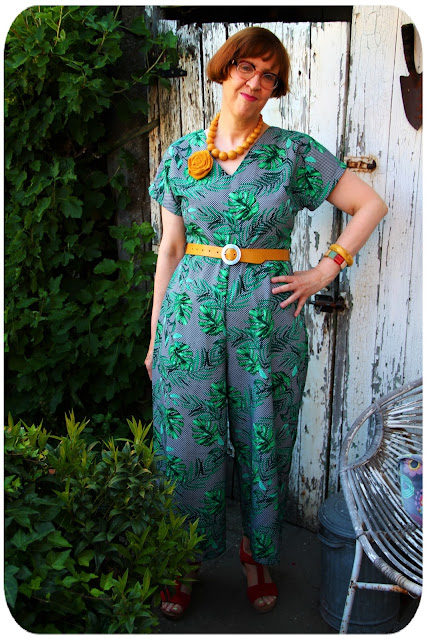 On Saturday the 12th of June, we woke up to a cloudy day and a reprieve from the hot temperatures, at just 21°C.
Browsing my wardrobe, my eyes alighted on my favourite jumpsuit, an irresistible high street buy in June 2018. I'd been on the lookout for a jumpsuit for quite a while by then, so I jumped - pun intended - at the chance when I spotted this one in a shop known for its fast and disposable fashion. It was exactly what I was looking for and I never once regretted my purchase, which has been getting regular outings ever since. Let's call it fast fashion worn slow! 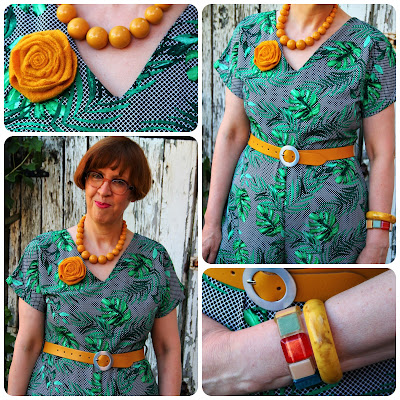 I piled on the yellow accessories, which consisted of a round-buckled belt, a felted flower corsage - another Pembrokeshire holiday souvenir - a beaded necklace and a mottled Bakelite bangle. The latter got the company of a charity shopped multicoloured resin bracelet. 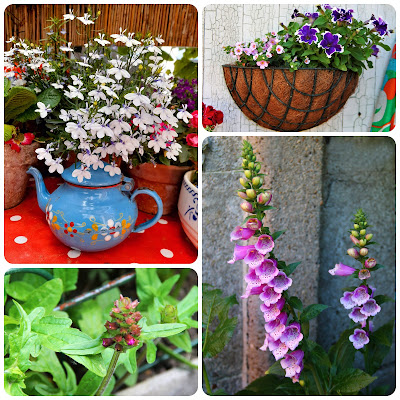 As usual, the day started with an after breakfast wander around the garden.

All our pots and baskets seem to be in fine fettle. I love how the white Lobelias are spilling over the blue enamel teapot in the passageway, and that Petunia "Picotee Blue" and Sutera "Pink Beauty" are living happily side by side in the old half-basket on the potting shed.

The pink Foxgloves are brightening up a shady corner next to the white current bush and, in front of the bench, flower spikes have started appearing in Prunella grandiflora 'Bella Deep Rose' (bottom left), which we planted last Summer. 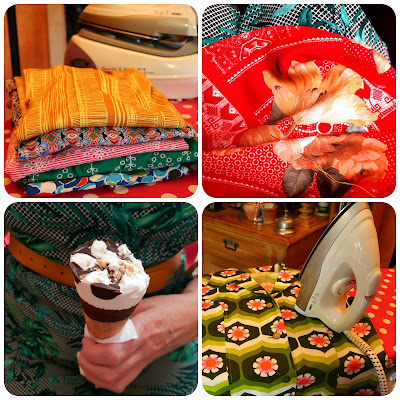 The forecasted hot temperatures of the week to come prompted an impromptu ironing session as I suddenly realized most of my hot weather clothes were still residing in a suitcase in our bedroom. I also repaired a fallen hem in the Lady Ann dress I wore on Thursday. After this flurry of activity, the Cornetto ice cream was a well-deserved treat, don't you think? 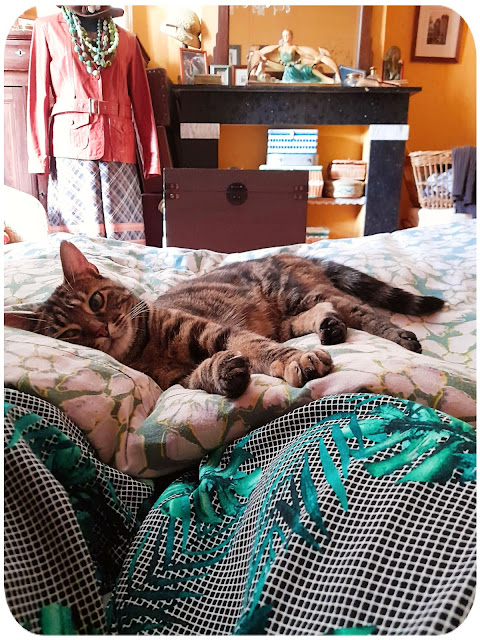 This was followed by an afternoon nap in our bedroom, the napping being done by Jos and Bess, while I lay reading the final chapters of my book. 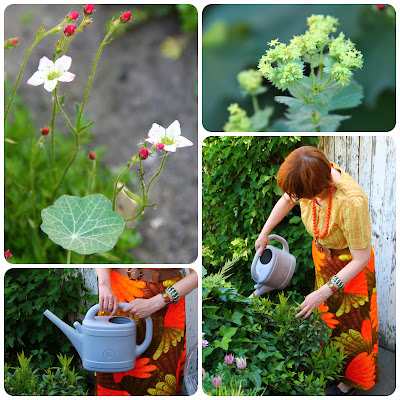 The temperature stepped up a gear on Sunday, reaching 24°C. Taking advantage of all the ironing I'd done on Saturday, I dressed in my beloved curtain couture maxi skirt, a Think Twice sales bargain in June 2019. Not only is it my most-worn maxi skirt, it accompanied me on our UK holiday later that month. Here I am wearing it on a most wonderful day spent in Bridgnorth, Shropshire. 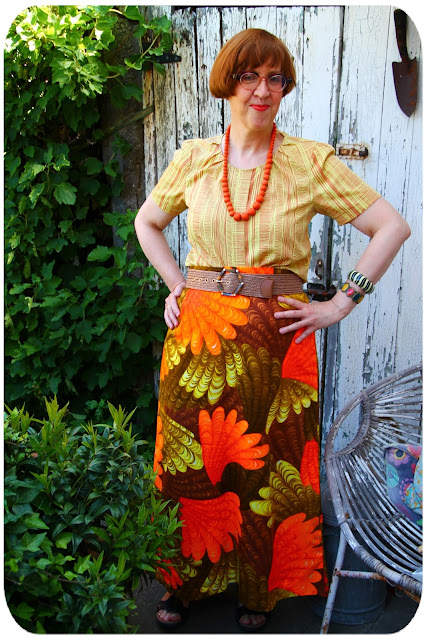 The short-sleeved cotton top - also fresh from Saturday's ironing pile - was charity shopped last Summer and was a delight to wear, even if it tried to escape from the waistband of my skirt a couple of times. Not even the recently acquired stretchy belt with its hexagonal buckle could keep it in check!

Further accessories were a string of orange wooden beads and another bangle and bracelet duo. The bangle was part of the same charity shop haul as the one worn with my first outfit. 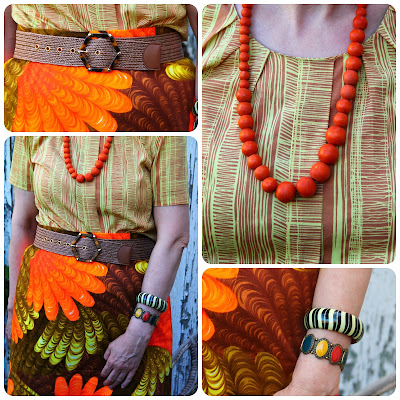 I took this photo in the relative coolness of the morning, with some of my profusely flowering pots on the old barrel at the back of the garden in the foreground. Behind these, an out of focus melange of white Lavender and Red Valerian (Centranthus Ruber), with the abundant foliage of the white currant bush in the background. To its right is one of the baskets hanging from the awning outside the kitchen, proudly displaying its deep indigo Petunias. Such floral extravaganza is making my heart jump for joy! 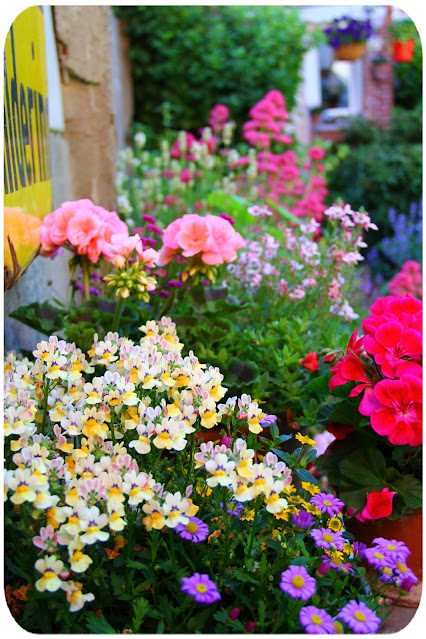 The rest of the day was spent doing some light pottering and reading, finally finishing the book which still resonates with me. So much so that I'm having a hard time starting a new one. Definitely in my top three of this year so far.

Now, before I wave goodbye once more, here are the terracotta pot and hanging basket I planted up the weekend before.

The vintage terracotta pot harbours only one plant, but what a spectacular one! This is Petunia "Night Sky", its gorgeous purple flowers with white speckles reminiscent of a starry sky. 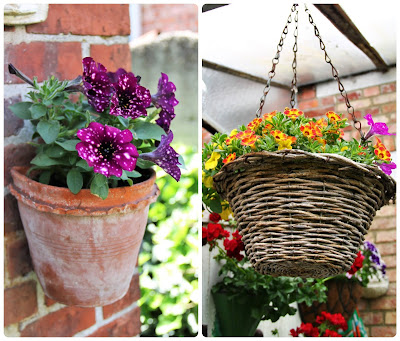 The basket also has a variety of these speckled Petunias, this one called "Pink Sky". You can just catch a glimpse of them on the right of the basket's other inhabitants, a red and yellow Calibrachoa, also known as Million Bells.

I will be back with more heatwave woes, outfits and garden updates in a couple of days.

Once more, do stay safe, sane and fabulous out there!